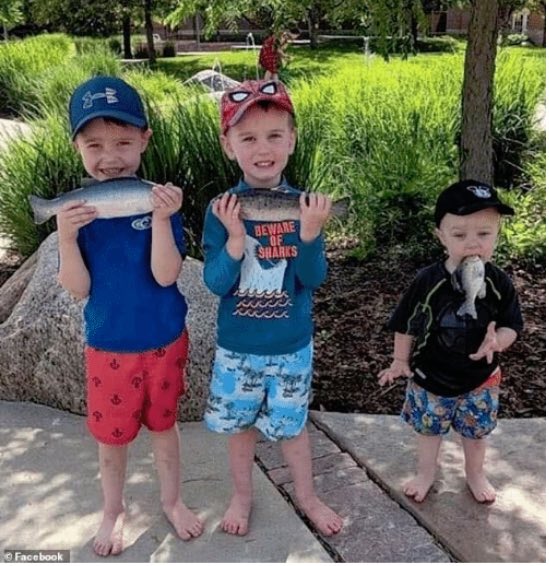 Were you that Kid?

A Bit of Cat Humor to Make your Day! 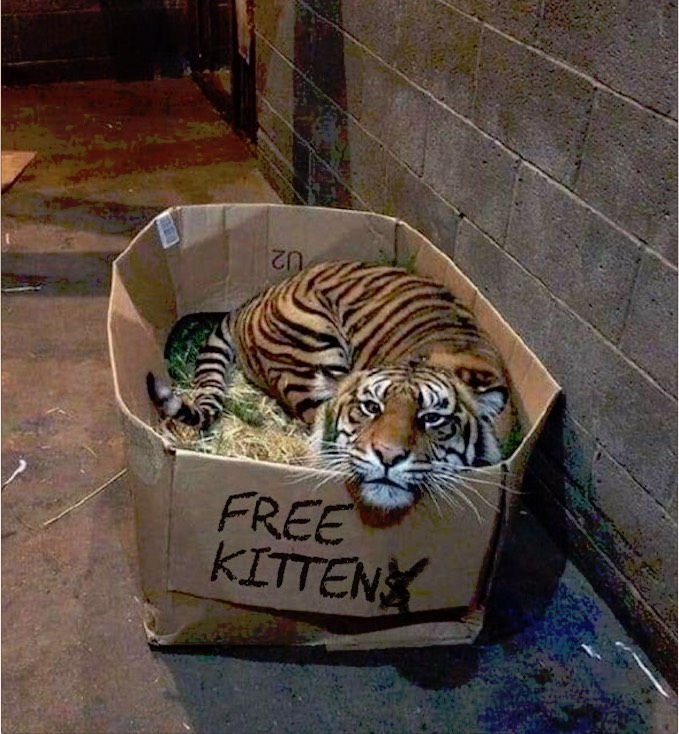 Free to a Good Home

When we plan our hiking and photography trips, we understand that we are most likely going to have some days when the weather is not ideal. Even if it rains, as long as it isn’t a deluge, we carry out our plans to hike. We may elect to alter the selection of trails, but hike we will.

During our adventures in Sequoia National Park, California, we wanted to see a stand of the giant sequoias that were located in the Muir Grove near the end of the Muir Grove Trail. The day was a dreary, drizzly one. To add a bit of drama, we had a map that accessed the trailhead through one of the campgrounds that was unfortunately closed for renovations. Cars were not allowed, but we were told we could walk in.

The construction turned the campground into ghost town and the cloudy, misty, rainy day created an eerie spectacle. Undeterred however, and with most of the landmarks altered or removed, we finally located the trailhead.

As we made our way along the designated path, we came across the beautiful branch pictured below. The two elongated pine cones were dangling in the air. They were posed in such near perfect juxtaposition against the misty background, that I was inspired to take this photograph and I am glad that I did. 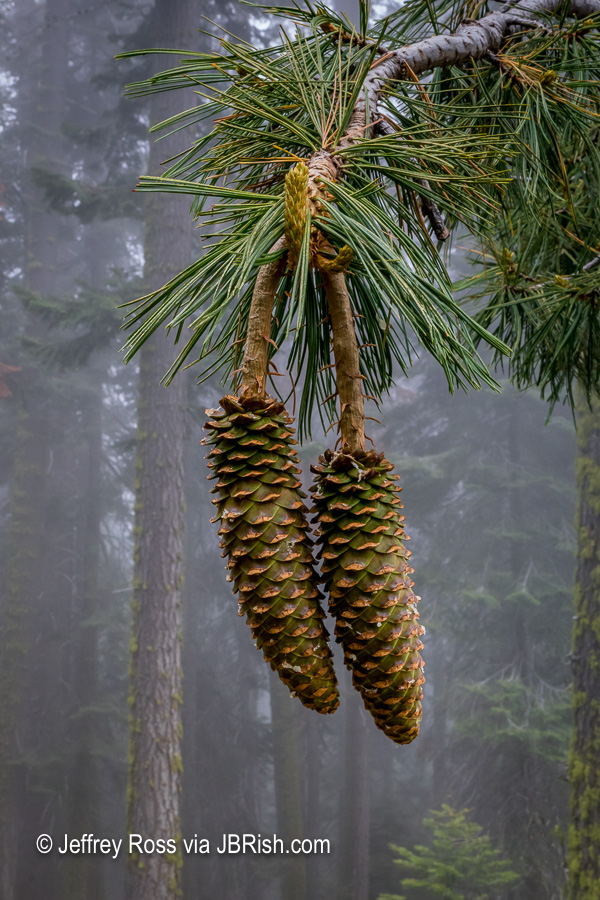 BTW – Here is a picture of me by the unbelievably huge sequoia’s near the end of the trail. To give some perspective to the scene, I am nearly six feet tall and I am standing at the base of a single tree.

Click HERE for more information about the Grove Muir Trail. 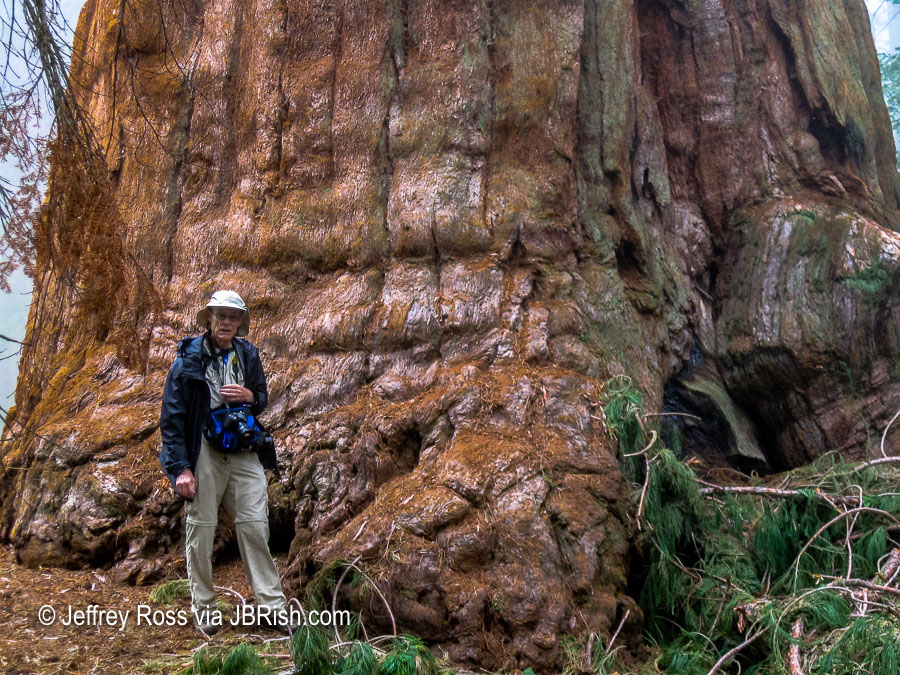 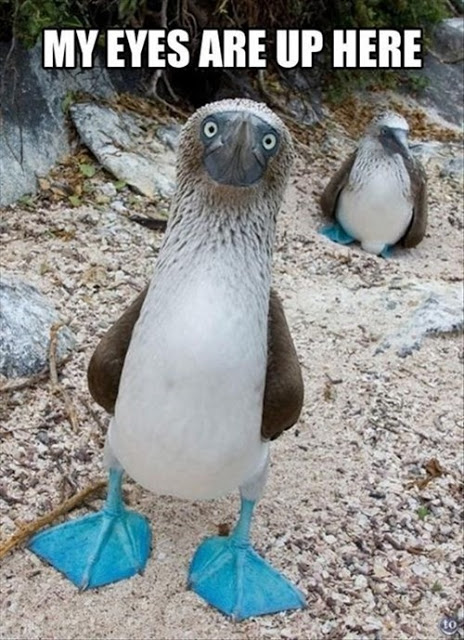 It is hard not to be drawn immediately to those blue feet and what a color of blue they are! As it states at the referenced link below, it is a bit of coincidental humor to be named a “booby” and have those feet!

Where is this driver?
I think the driver might be underage and… what is that I see on the front seat? 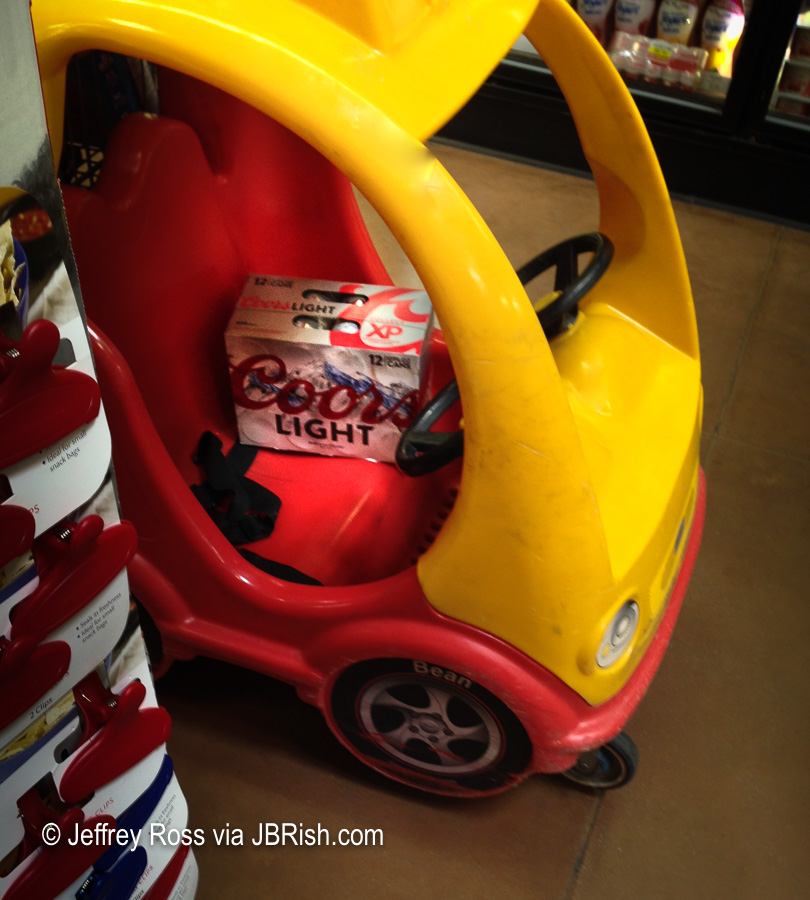 “And suddenly you know: It’s time to start something new and trust the magic of beginnings.” — Meister Eckhart

You might have read about my near horror story in a previous blog post, Fuji X T-2: When Support Helped Save a Vacation, but all turned out relatively well after the close call. This was my first major expedition with a nearly brand new Fuji X T-2 and I was anxious to see how it would perform.

I haven’t had a “state-of-the-art” camera in nearly fifty years. I had been using point-and-shoots with only a moderate interest in photography. I was generally a documentarian. I am now embarking upon the development my creative eye.

When we arrived in Portland, Oregon, the air was acrid and ash was falling from the sky and landing on our luggage due to the surrounding wildfires. We acquired an automobile and headed toward the coast. By the time we arrived in Astoria, OR, the sun was low in the sky; a saturated light grey. Little did we know that the coast was often grey and/or foggy.

One of my favorite photographs from this trip, was the very first one I captured in Astoria at the end of our first day. Our room was very near the Columbia river and the Megler Bridge. The area was, therefore, a waterfront and had many of trappings expected in such an environment.

As I looked outside the window of our room, I could see several boats that were in disrepair and in dry dock. The lure of these boats was probably the same as that which brings photographers to abandoned buildings. These boats were old and may not have been “sea worthy,” but they had character.

The sun was getting lower by the minute. I grabbed the camera and walked to the area with the retired Ladies of the River. One boat in particular caught my attention because it was stately even when adorned with decay.

I took a couple of pictures with the hope that I could capture the essence of the evening and the feeling I had standing next to this once dignified, yet working class boat. 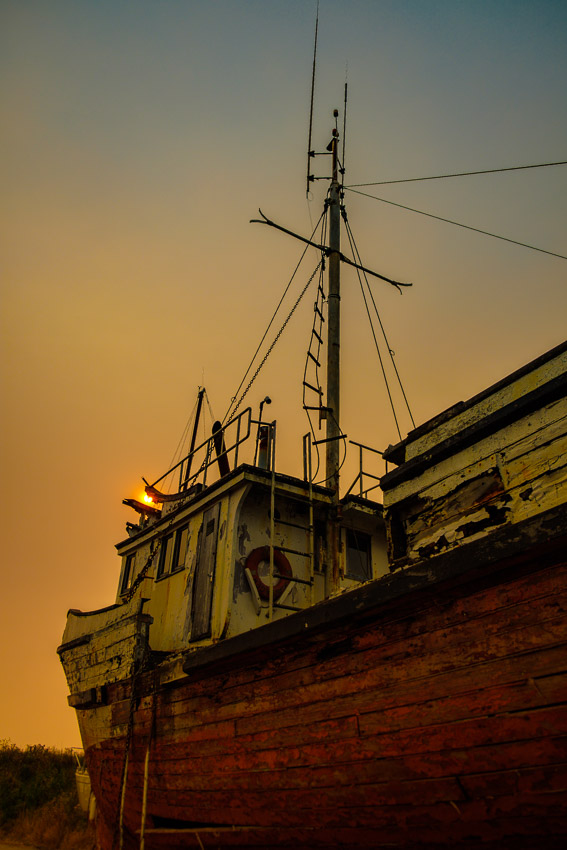 I will comfort you (ooo)
I’ll take your part, oh, when darkness comes
And pain is all around
Like a bridge over troubled water
I will lay me down 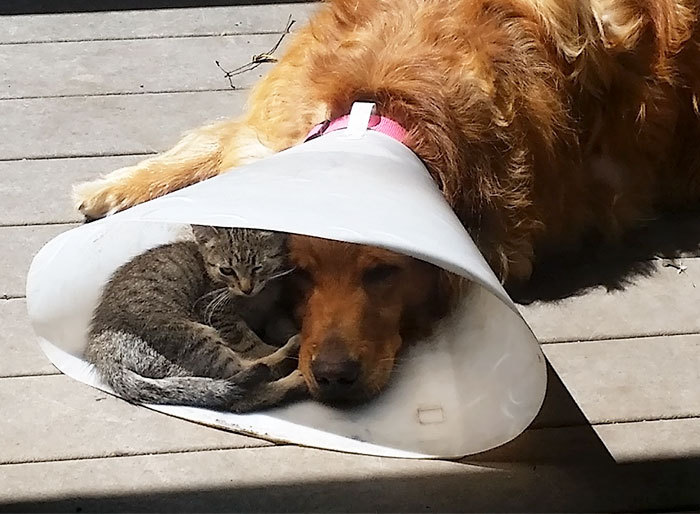 “Curiouser and curiouser!” Cried Alice (she was so much surprised, that for the moment she quite forgot how to speak good English).” ― Lewis Carroll, Alice’s Adventures in Wonderland & Through the Looking-Glass 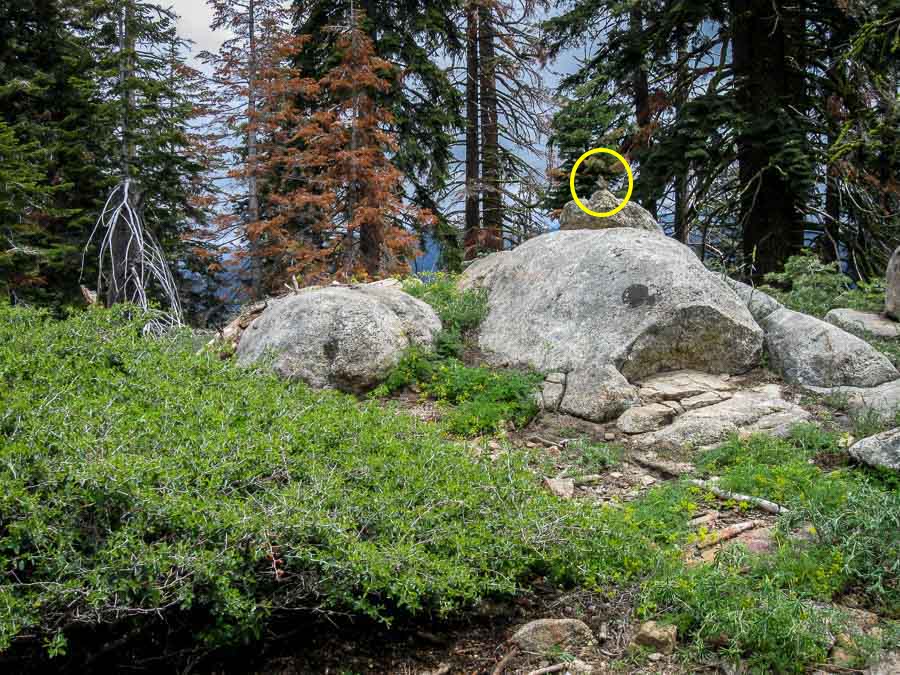 I think humans like to look at other living creatures and assign to them characteristics of our own species. We anthropomorphize other living things. We immediately understand that animals feel fear and love of some kind. I am not sure if all non-human animals share a sense of curiosity, but some obviously do. Dolphins, whales, primates, etc have all demonstrated behavior we would tend to classify as curiosity.

I have found that some birds are curious as well.

In the picture above, there is a bird sitting far away from where we were standing. Because of my interest in birds, we stopped to watch it for a while. You can’t make out the bird in the yellow circle in the photo above, but there was a very pretty bird sitting on that rock. A bird I had never seen before.

It took me a while to get out my superzoom camera and take a closeup of that particular bird, but here it is. 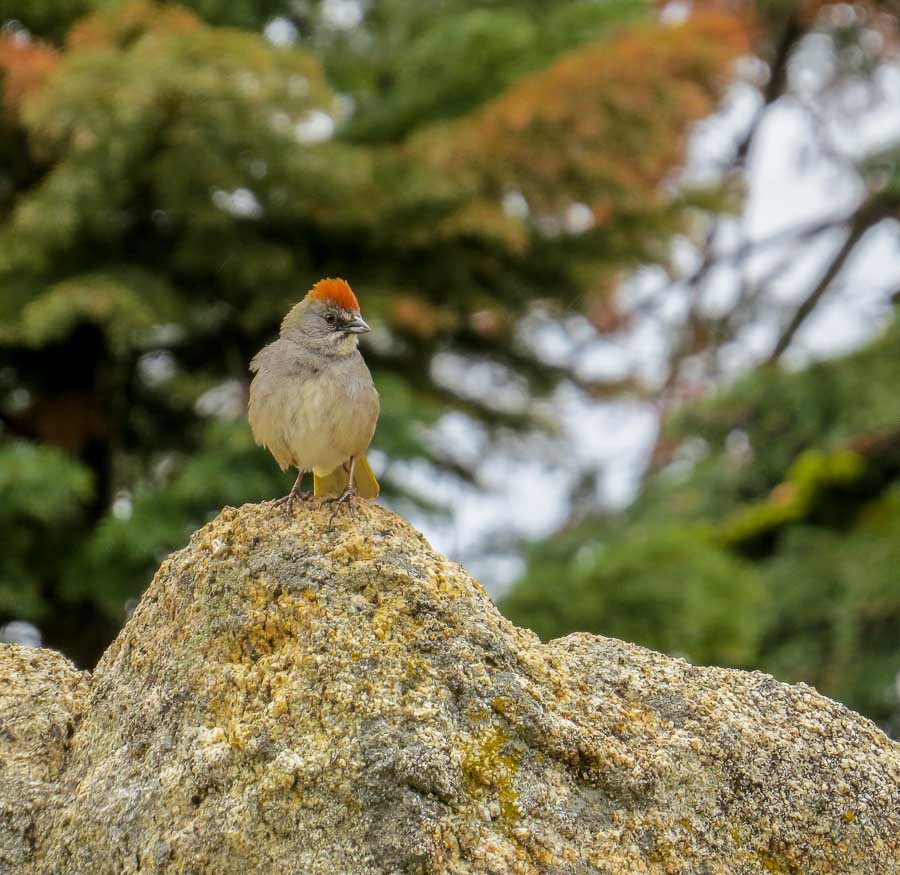 As we rested a good number of yards away, sitting on a rock, the bird continued to flit around, but at one point it landed on a tree stump that was only about twenty feet away; relatively close for a wild creature. I had the distinct impression that this bird was curious about us and what we were or weren’t doing. Since we were sitting quietly watching the bird, taking a drink and resting, I think the bird realized we had no bad intentions and it took chances to come close to us. It didn’t “park” there or stay very long in any one spot, but it did fly away and then come close again.

Eventually we packed up and moved on. Later I was able to identify this bird as a Green-tailed Towhee. This is one of the prettier birds I have seen with it’s red-orange tuft atop. 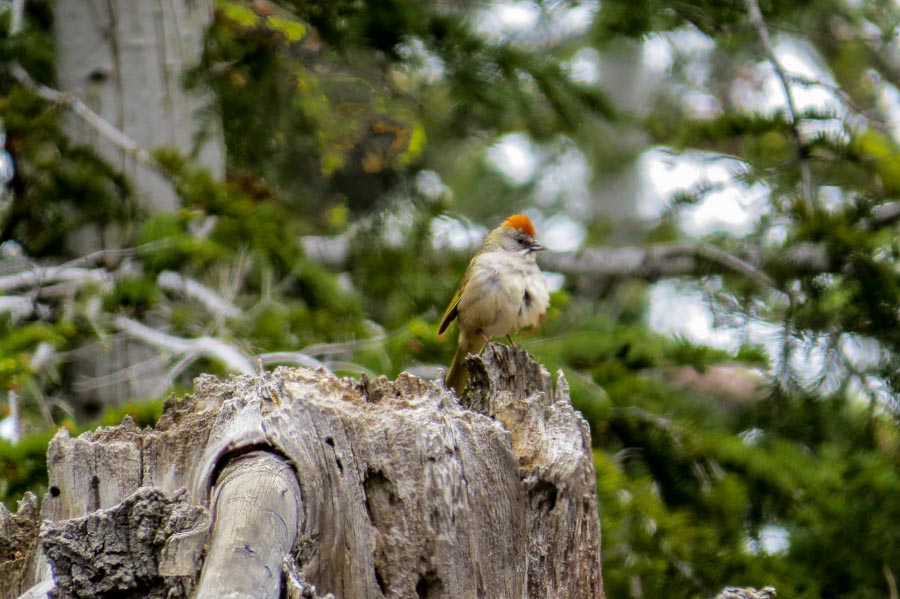 Read more about the Green-tailed Towhee

On the way to the Cabaret Theater, we walked past the room pictured in the two photos below. It appears to be a mixture of formal and informal touches designed for meeting and/or eating. 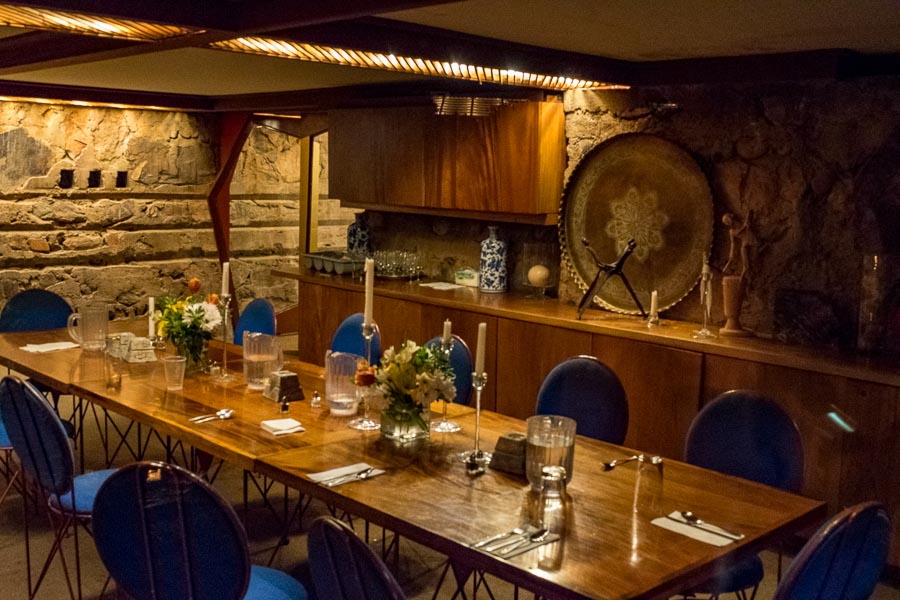 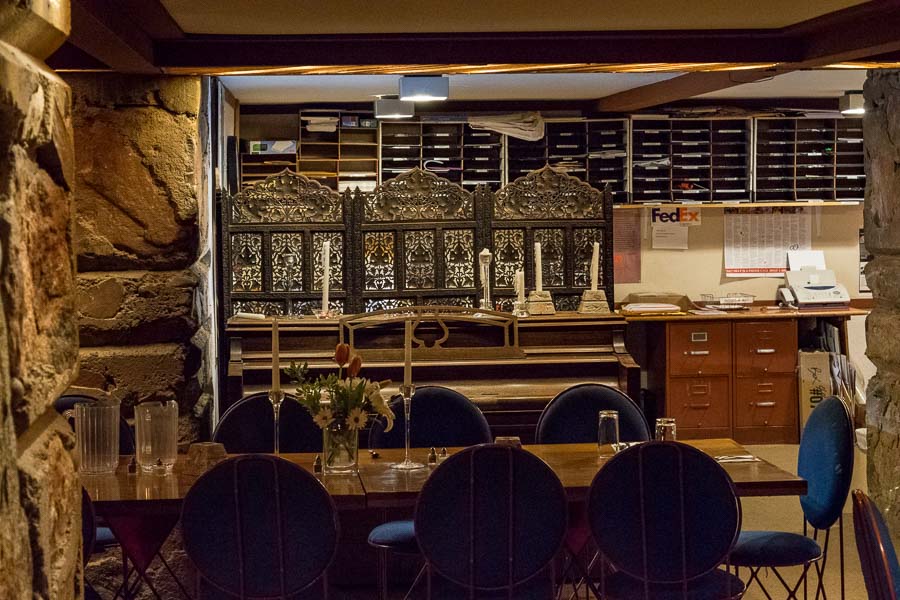 The evening tour ended with a final visit to the Cabaret Theater. This is an area (below) where movies were shown or smaller concerts held. 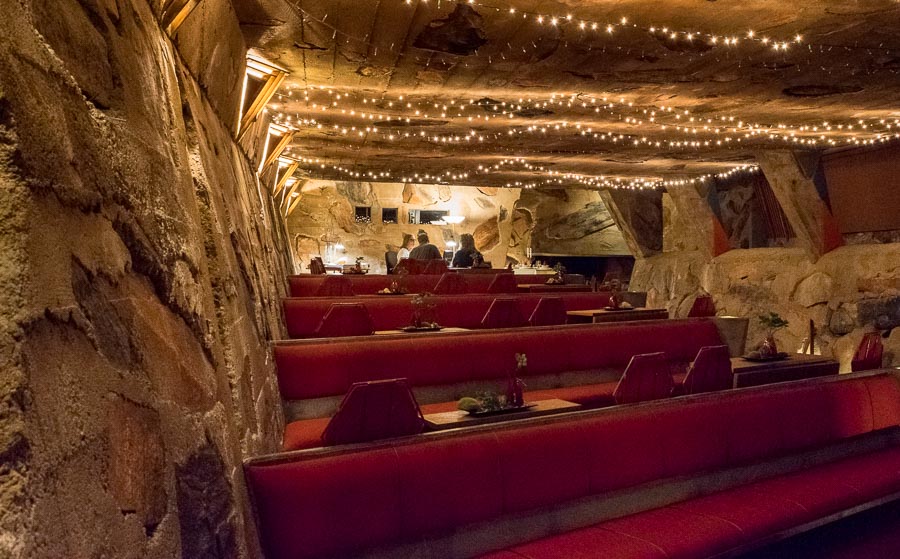 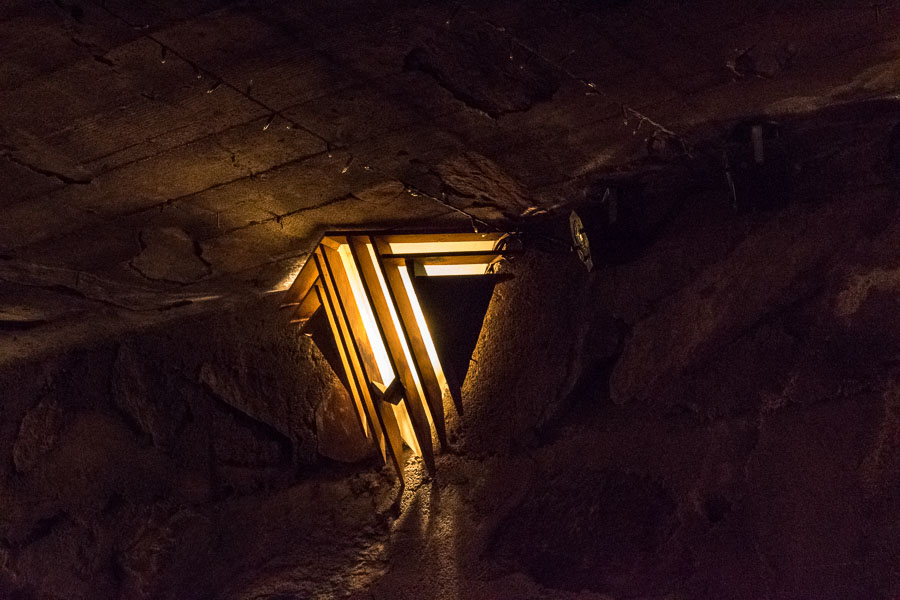 NOTE – Keep in mind that this series represents only a partial exploration of the evening tour at Taliesin West. There was much more included with many stories and insights offered. The docent was very experienced and knowledgeable.

We will end this photo essay with a quote by Wright himself:

Previous posts and photographs in the Taliesin West series in chronological order:

What motivates many people to take tours such as that offered at Taliesin West, is the interesting discoveries that await. There are so many nooks and crannies at Wright’s Arizona estate, that one never knows what will be found in the next room or just around the corner.

The picture below shows a detailed oriental sculpture that sat upon a dentil shelf in the Kiva Room that was used for conferences, etc. This evening they served cookies and juice. 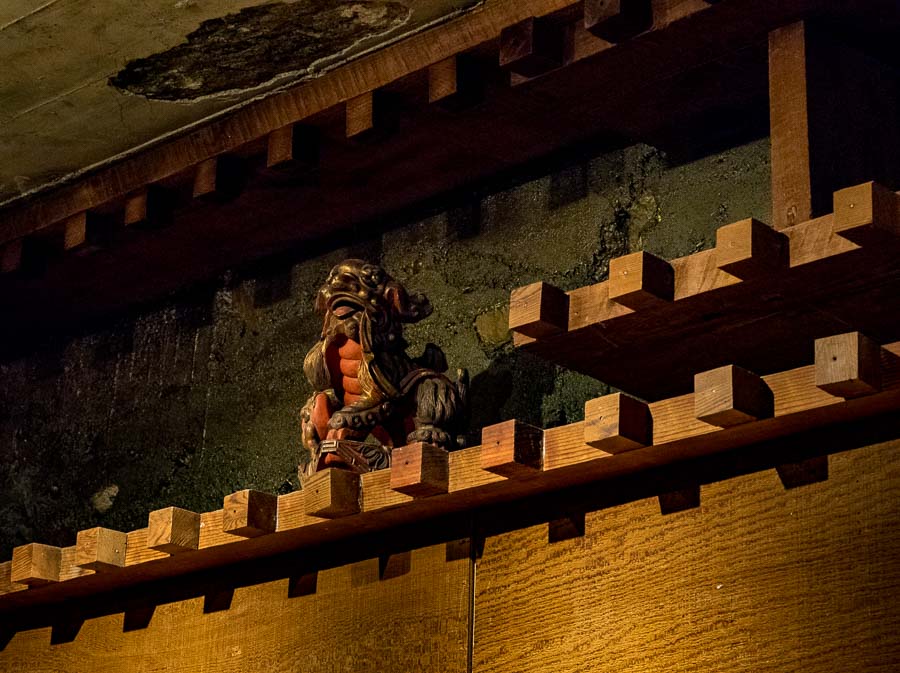 A detail from the Kiva (conference room)

Taliesin has its own Music Pavilion. 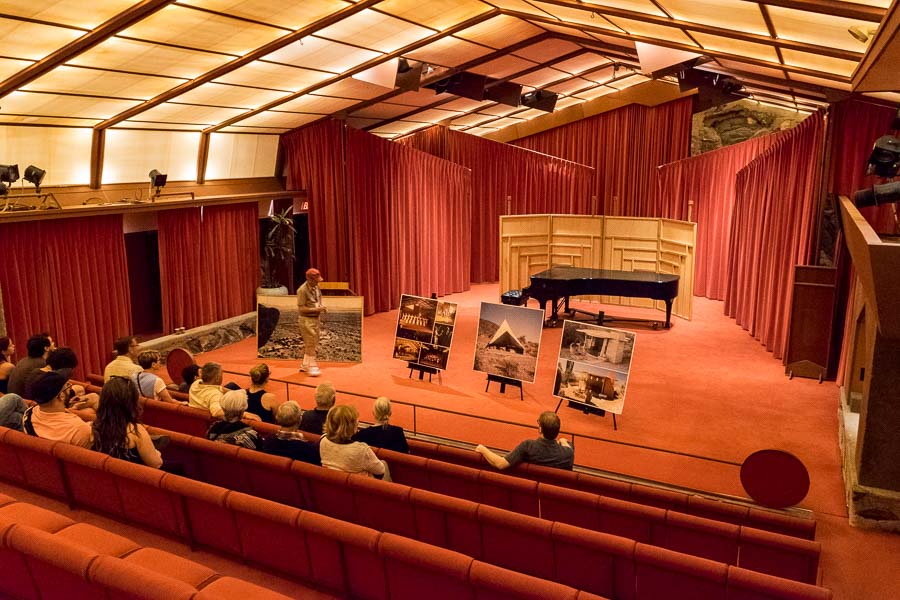 This mural (below) in the Music Pavilion is called “City by the Sea” which some explain was Frank Lloyd Wright’s interpretation of the Chicago skyline. 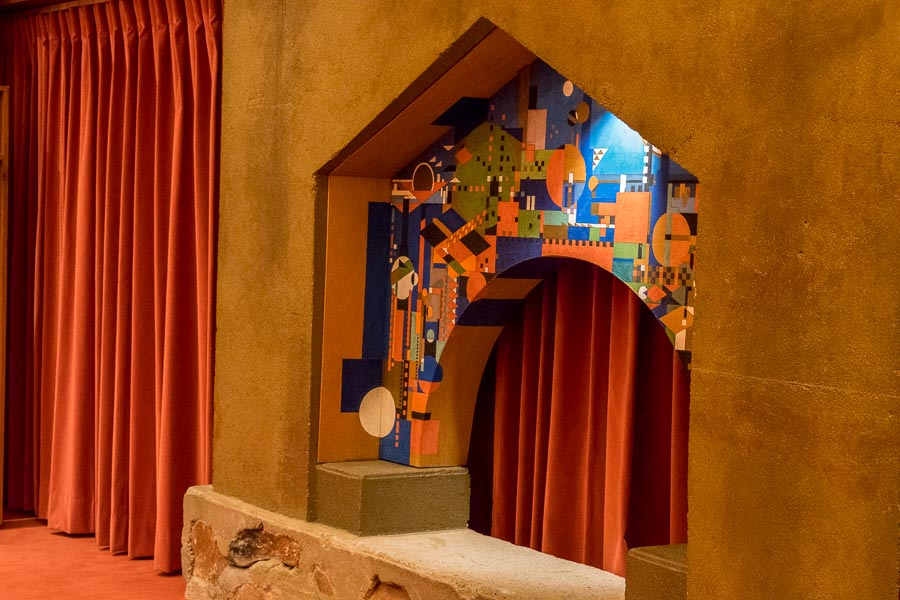 City by the Sea mural in the Music Pavilion

Previous posts and photographs in the Taliesin West series in chronological order: