Map courtesy of The Organization for World Peace modified for JBRish readers.

Mostar is located in the southern portion of Bosnia and Herzegovina and is divided by the Neretva River.

Walking near Mostar’s old town, tourists may sense that the architecture has Turkish influences with minarets piercing the air. 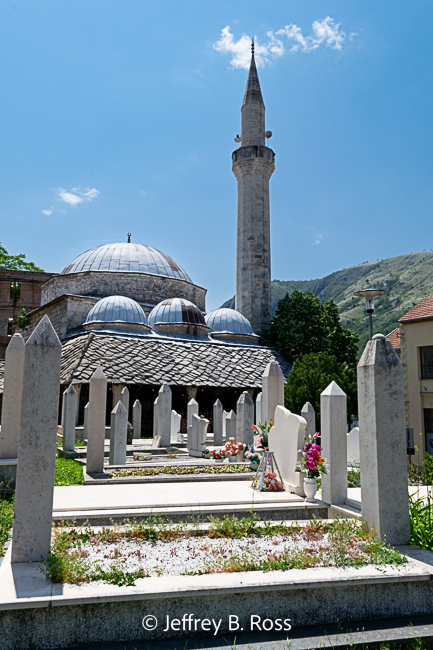 Of particular note is the Koski Mehmed-Pasha Mosque (below) which stands as an outstanding example of Ottoman architecture. The tall and thin minaret can be climbed with paid admission.

Another aspect of Mostar that is reminiscent of Ottoman and Middle Eastern culture is the Bazaar-like section of old town.

Flowers carefully planted outside the vintage windows help take the edge off the overabundance of souvenir shops.

The intricate patterned cobbled streets are sometimes tricky to negotiate.

It is the Neretva River, however, which necessitated the creation the area’s most famous landmark – – the “extremely arched” Stari Most (Old Bridge). The bridge has a storied history which you can read HERE.

While crossing the Stari Most, visitors will soon realize that there are raised horizontal strips which may make walking somewhat awkward, but without them the bridge can be very slippery. Tourists are advised to walk on the raised sections if possible.

To entertain visitors, young men stand atop the railings of the bridge and when enough people have provided monetary encouragement, they dive 70 feet from the bridge into the Neretva. The river also serves as a venue for rafting and kayaking.

The panoramic views from the top of the bridge are scenic and picture-worthy.

Mostar came under attack during the Bosnian war and the Croatian army destroyed the famed landmark.

While UNESCO and other countries assisted in rebuilding the bridge between 2001 and 2004, the painful experience the destruction represented has been seared deeply into the psyche of the local population.

Orašac Village – Earlier in the Day

On the way to Mostar, we stopped in a very quaint, quiet and picturesque town of Orašac, Croatia founded in 1040.

We were there to visit a small private garden and olive mill that has retained some of the traditional methods of producing olive oil.

The old olive press was quite a machine to see, but what was even more interesting was how the press was operated. One horse power was all that was needed.

After a sampling of the offerings, we were on our way!

Dubrovnik, Croatia – Pearl of the Adriatic

Old Town Dubrovnik – Above it all

Old Town Dubrovnik – The Low Down

Dubrovnik from the Adriatic and Mt. Srd

Montenegro & The Walled City of Kotor