Wheeler was a fun stop. We enjoy small towns with their the local, small-shop milieu which generally offers homey, welcoming touches.

Another stop we targeted was an unusual rock formation in Garibaldi, OR known as The Three Graces which are millions of years old. 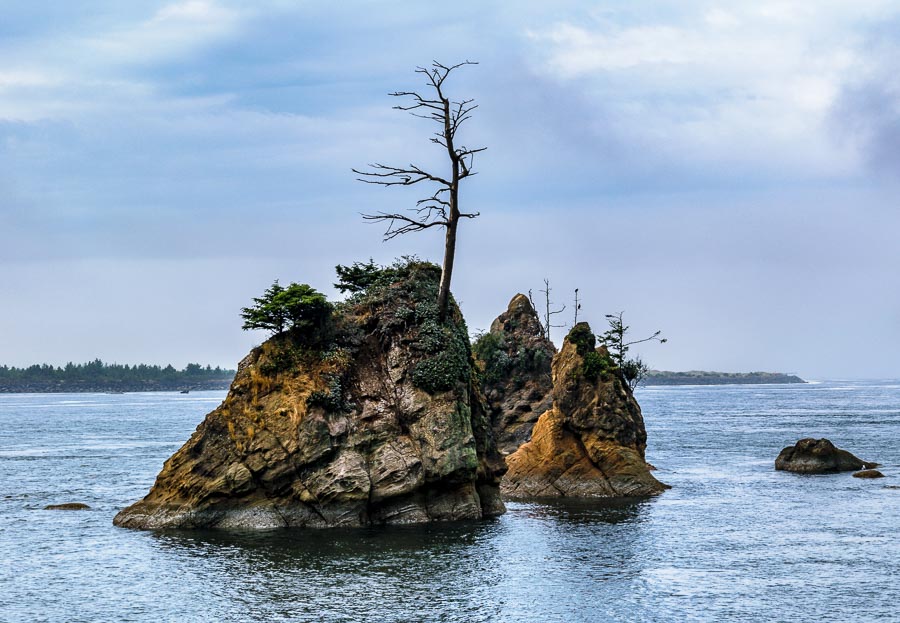 The Three Graces with blue skies!

Here is a description:

Nestled near the shore in the channel leading from Garibaldi to the North Jetty and the Pacific Ocean is a picturesque rock formation known as the Three Graces. The rocks are a favorite of birds and photographers and, at their base, they feature tide pools and excellent beach combing. http://visitgaribaldi.com/three-graces/

As you can see, the weather was very variable, but this helped create some dramatic views of The Graces 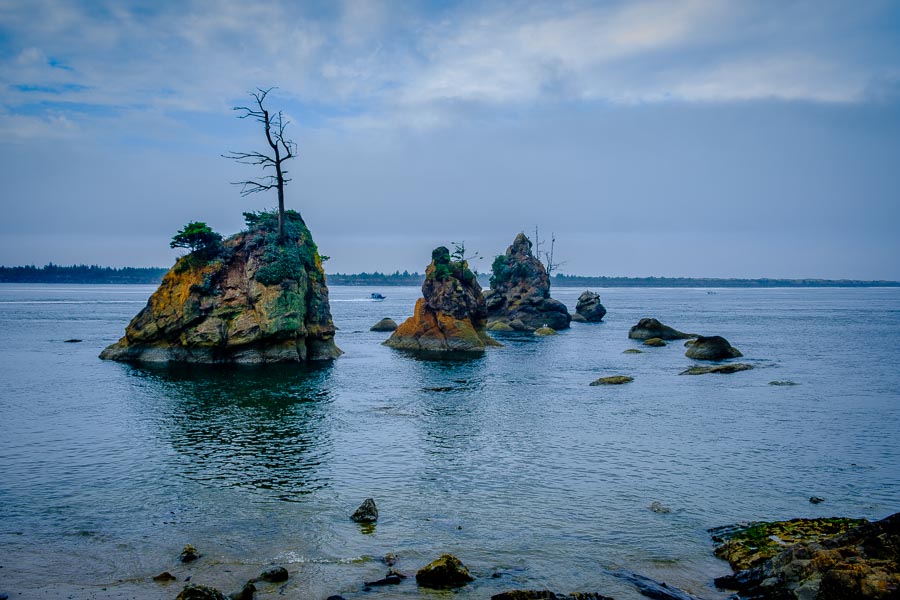 A wider view of the graces and vicinity

It was a short, but sometimes challenging walk down to the shore where the tide pools collect during low tide. The rocky coastline makes the footing a bit tricky and when wet, perhaps not good for those without the appropriate footwear and good balance. 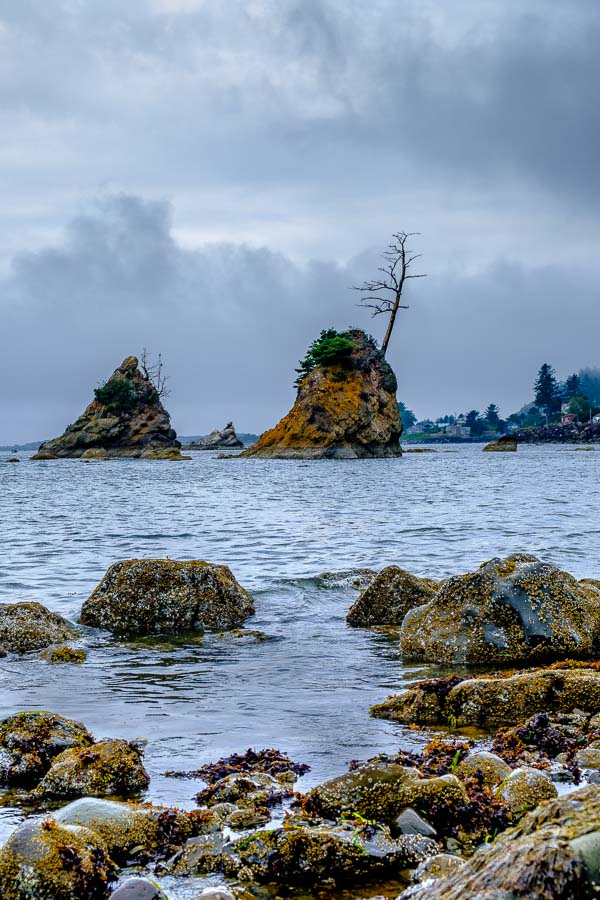 The shoreline was quite rocky and footing difficult.

Interestingly enough there was another fascinating rock near the Three Graces that was itself quite interesting. I tried to find a name for it, but was unable to determine any label, but if you visit you are sure to see it. 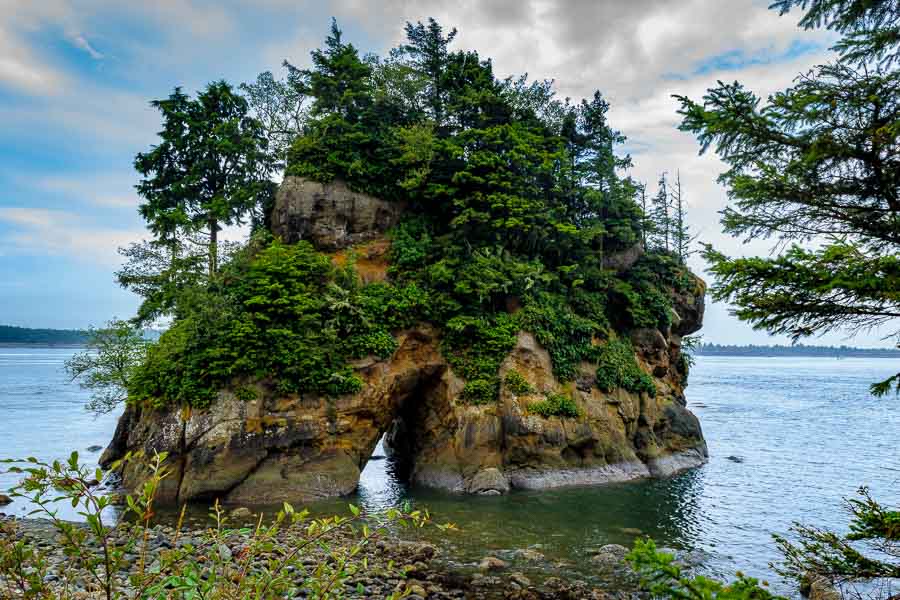 A neighbor to the three graces was just as interesting!

I particularly enjoyed the window at the base which enabled a peek into the distance. 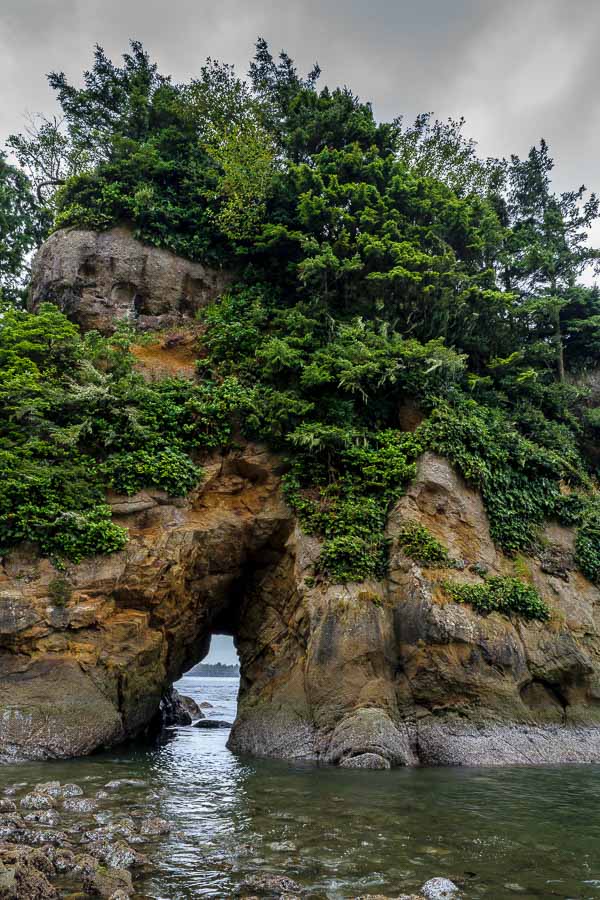 Perhaps the best place to park if visiting the formation is about a half mile or so north along the railroad tracks which were also quite scenic. 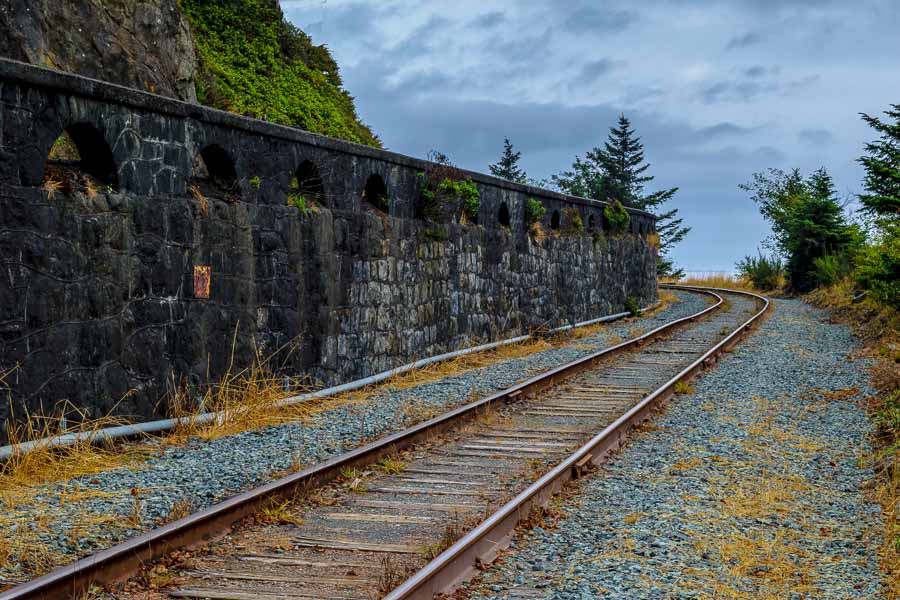 What’s behind the bend? 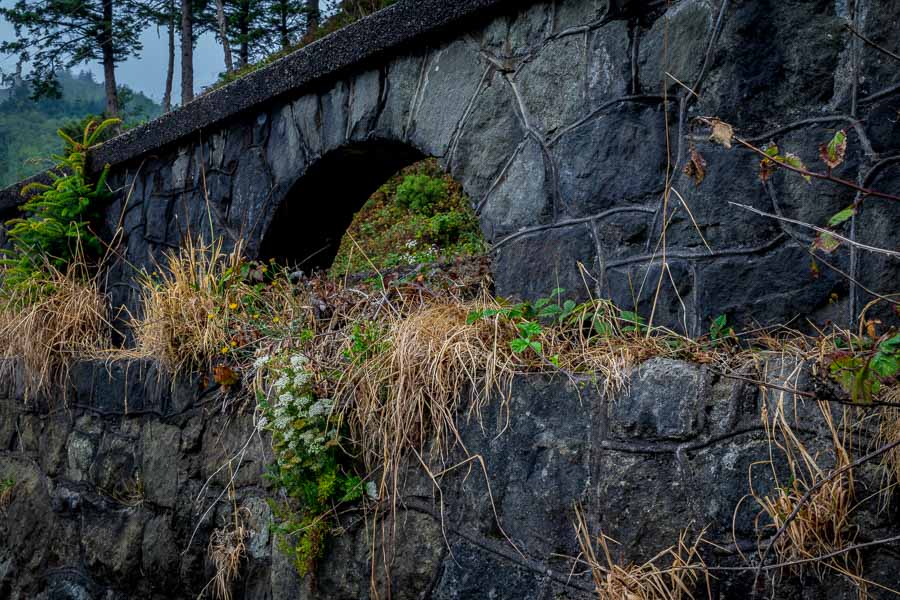 Nice stonework in the roadway wall.

Once we saw the Three Graces from as many angles as the weather and footing would encourage, we headed to the village of Garibaldi. We weren’t too sure what we would discover, but it proved to be a good find.

Most of our time was spent on and around the Garibaldi pier which was charming and had a number of attendees “fishing” for Dungeness crabs. 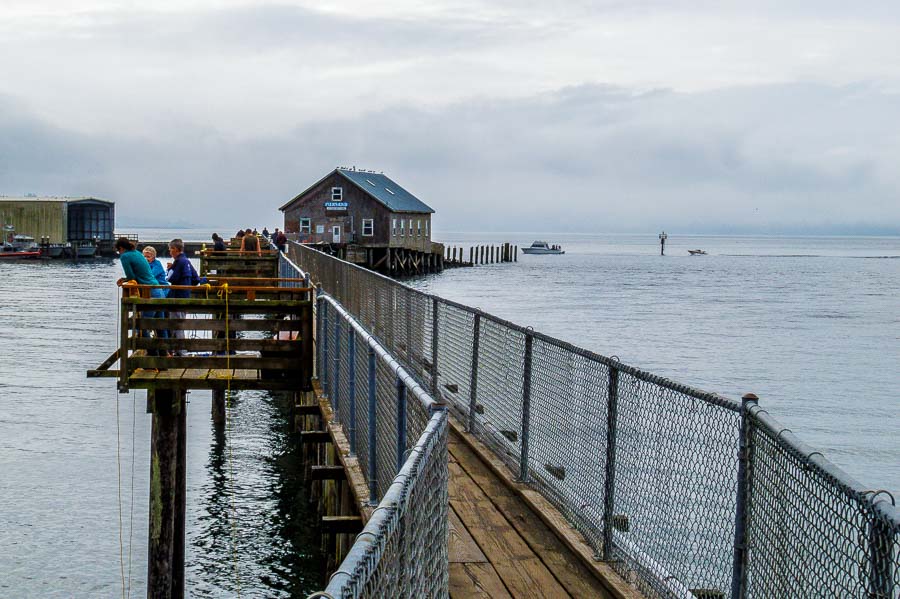 “At over 700 feet in length, Garibaldi’s Pier’s End pier is the longest in Oregon. It is located across U.S. Highway 101 from the historical Coast Guard Headquarters building. Near its end is a building that served as a boathouse for the Coast Guard from 1934 until the early 1960s. The Port of Garibaldi took ownership of the pier as part of a land swap with the federal government in the late 1970s. Although the building is under private lease, the pier itself is open free to the public for a wide range of recreational fishing opportunities, including crabbing, bottom fishing for sturgeon and other species, and salmon fishing. A stairway provides public access to the clam beds below. There are several turnout locations for setting up chairs while tending your crab pots or fishing lines. The pier is open from dawn to dusk. To access Pier’s End, take 12th Street from U.S. Highway 101 and turn right on Bay Lane. There is parking near the entrance to the pier.” – http://visitgaribaldi.com/piers-end/

The shoreline was dotted with some boating-related industries and every now and again, a few small fishing boats would pass by. 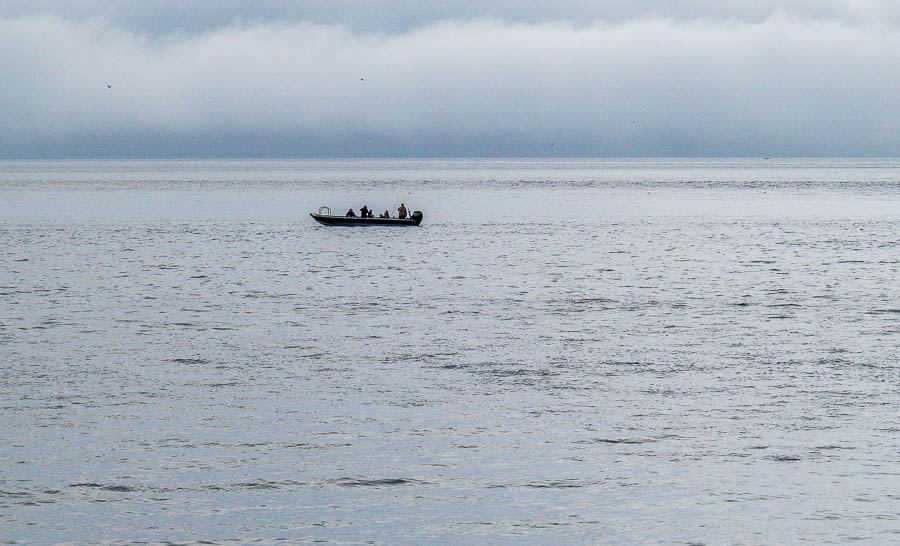 A boat with anglers heading home.

The cormorants seemed to be taking the day in stride as they took time to dry their feathers on adjacent pylons. 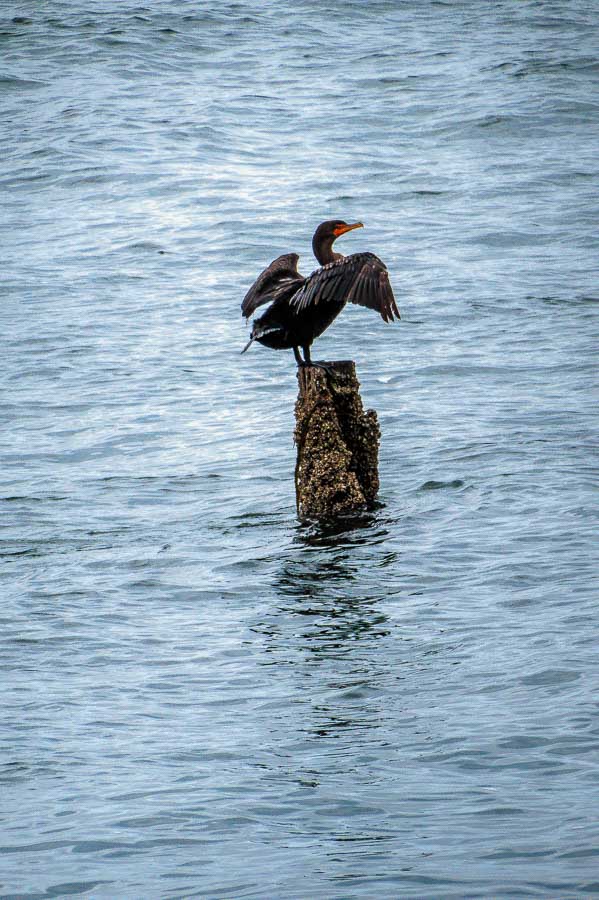 Cormorants are also hoping for some fish.

As we were leaving, I couldn’t resist just one more photograph. Here it is rendered in a near black and white version which captures the mood of that day. 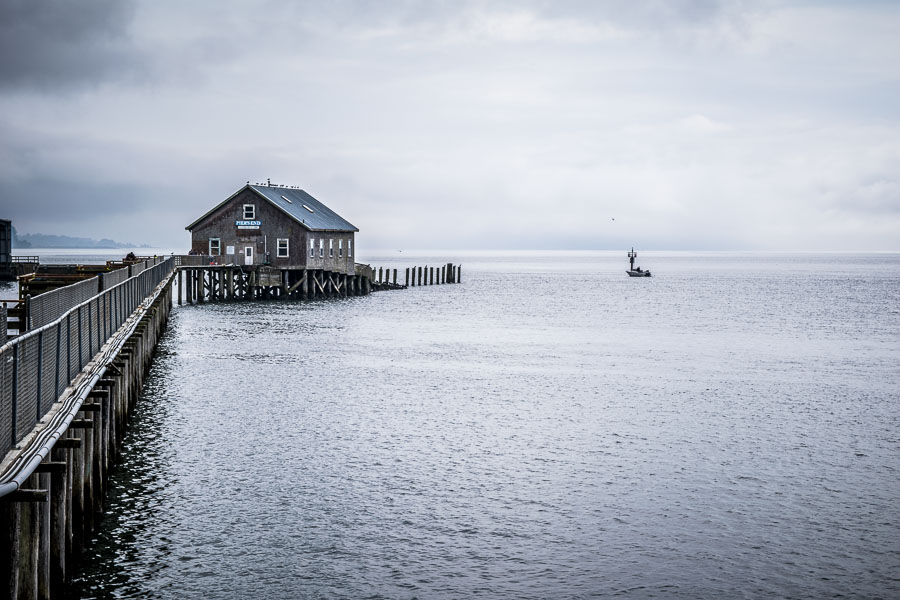 A favorite photograph of the Garibaldi pier taken as we were ready to leave.