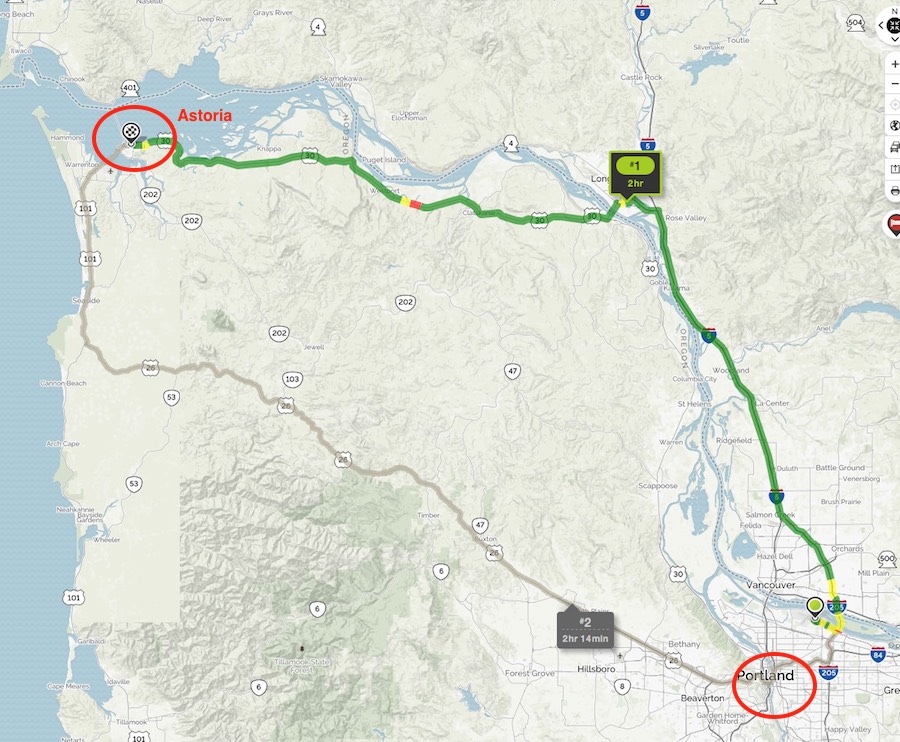 Map route from Portland to Astoria, OR – Green

As part of our “hike while you still can” regimen, my wife and I decided to schedule a hiking vacation along the coast of Oregon and then on to Crater Lake for September, 2017. Even before we landed at Portland International Airport, we could smell fire in the airplane. We knew it wasn’t the Boeing, but the fires breaking out all over Oregon which tainted the air.

We retrieved our luggage and made a beeline for the car rental counter. After dusting the ash off of our suitcases and getting the trunk of the car packed, we headed toward the Oregon coast and the town of Astoria.

Astoria is a river town sharing space along the Columbia River and it has the requisite trappings of a riverside town. Our hotel was just yards from a shipyard with a number of ships and boats in a variety of conditions. The sun was setting and I was tired, but I couldn’t resist the photographic opportunities. I took my Fuji X-T2 and snapped just two pictures. 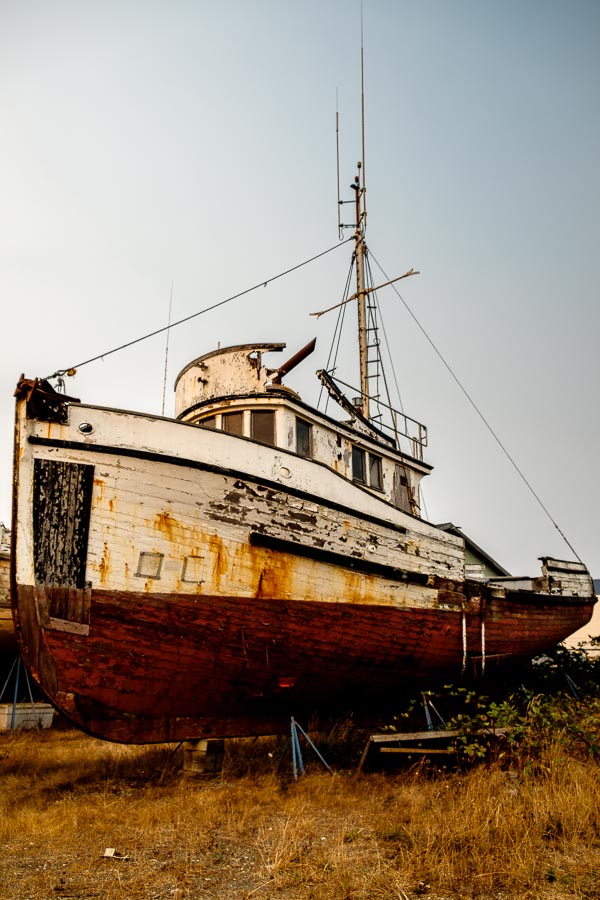 Shipyard along the Columbia River

A better image of the boat above appears in my previous post Fuji X T-2: The Magic of Beginnings. We enjoy walking around towns and discovering the variety of shops and sights. As we explored the streets the next day, the reminders that this was a fishing and river town were abundant. 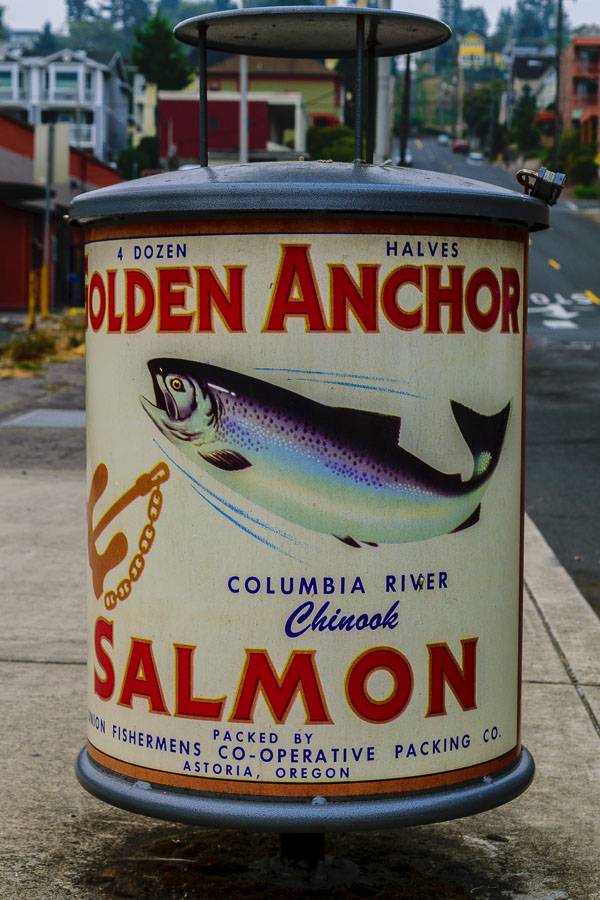 The antique shops, cafes and other stores proudly adorned their windows with sailing memorabilia and accessories. There were a number of “general” decorative touches along the sidewalks as well. 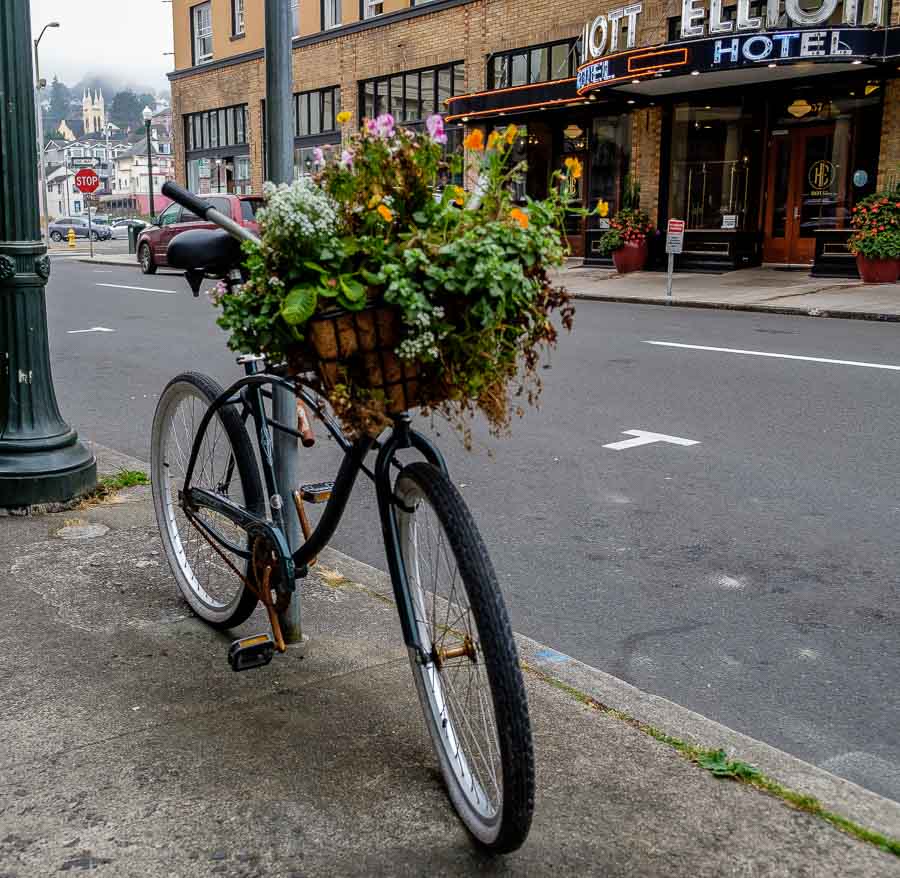 Our first major stop was the Garden of Surging Waves. This was a small, inner city park celebrating Astoria’s Chinese heritage dating back to the days of John Jacob Astor. Interestingly, “The Chinese written characters for the words ‘surging wave’ are also used to express hardship and struggle — experiences shared by many of America’s early immigrant groups.” *

* Read more about the Garden of Surging Waves and HERE.

We entered the garden, part of Astoria’s Heritage Square project, through the Moon Gate which appeared to be the main entrance although there are a number of entryways. The ironwork was bold and attractive. 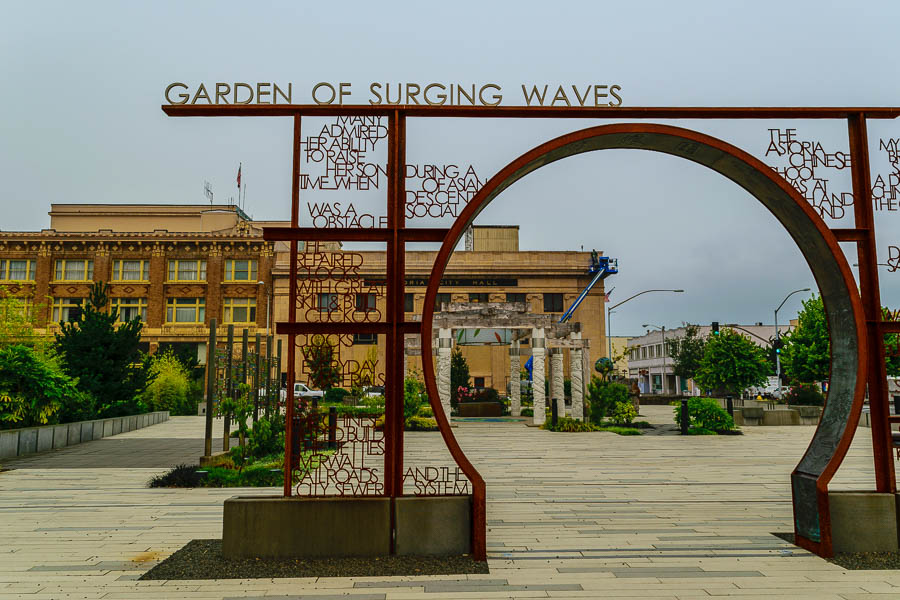 Traditional Moon Gate entrance to the Garden of Surging Waves

The ironwork not only serves as an entry, but also a story screen. There are a multitude of quotes and phrases related to the experience of the Chinese families and workers who helped to build the town of Astoria.

One touching quote appearing in the picture below, across two vertical sections, reads:

“Grandma said that Dad was so sick on the boat from China that he would have been fed to the fish if he had died. Now a seafood lab is named after him for the fish feed that he and his team developed.” 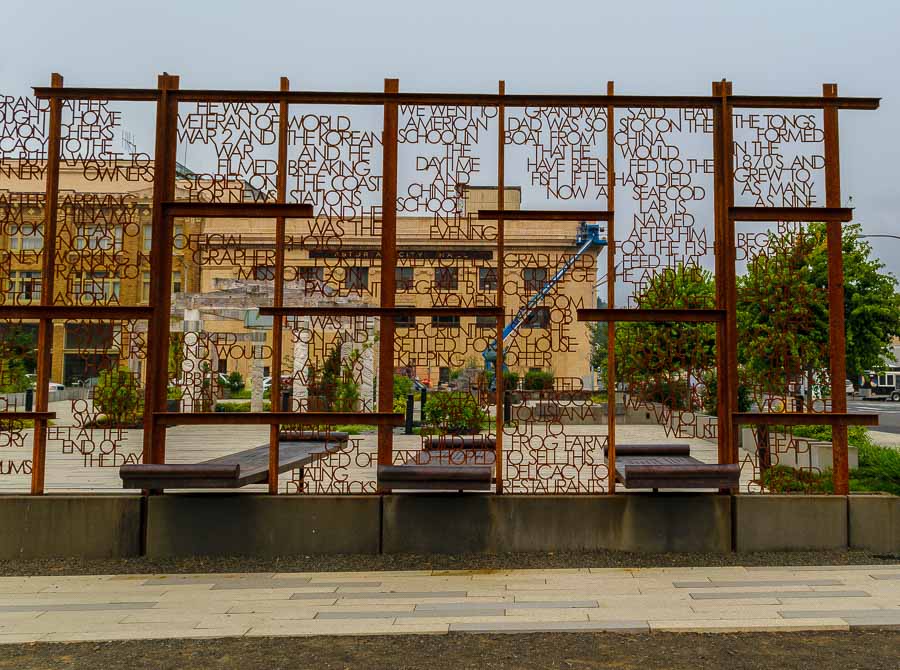 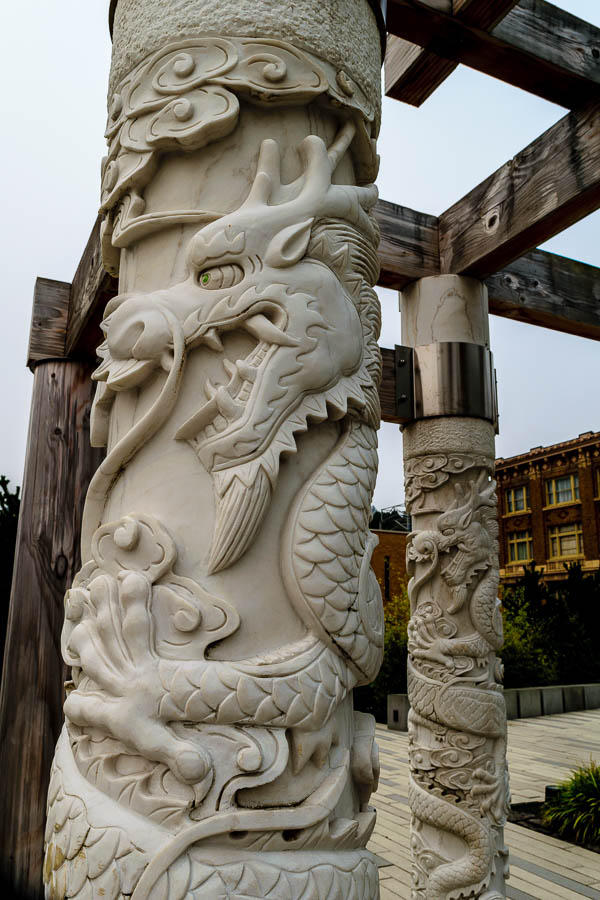 The columns hold a series of wooden beams which in turn serve to frame a colorful stained glass crown-like structure. Although the day was grey, the sun did try to poke through as we stood in the open air pavilion. 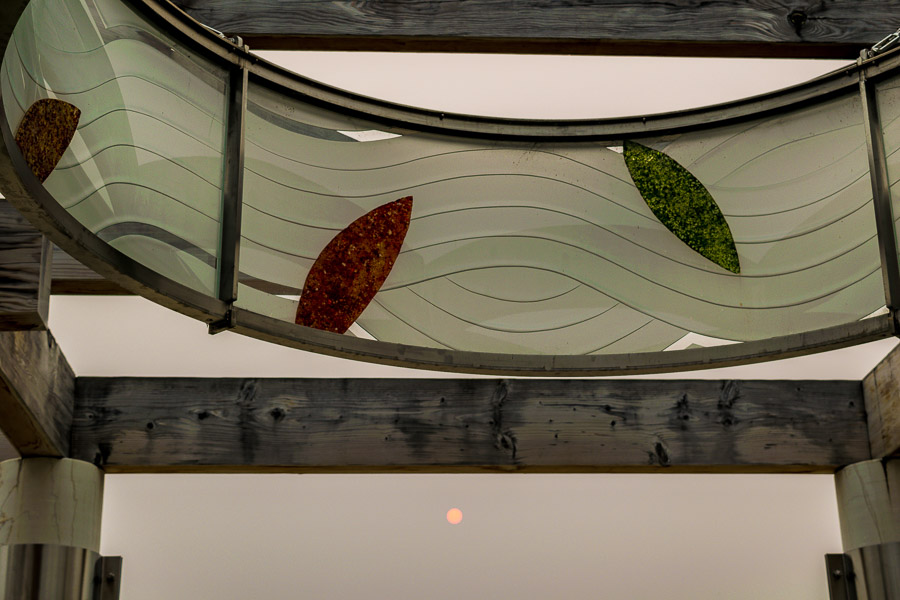 Further investigation led us to a large cast bronze lantern in the style of an incense burner which depicts characters in a story about a mythical dragon and a wise monkey. You can read about the statue and myth HERE. This was our last stop in the garden before we headed for 11th St. and more discoveries. 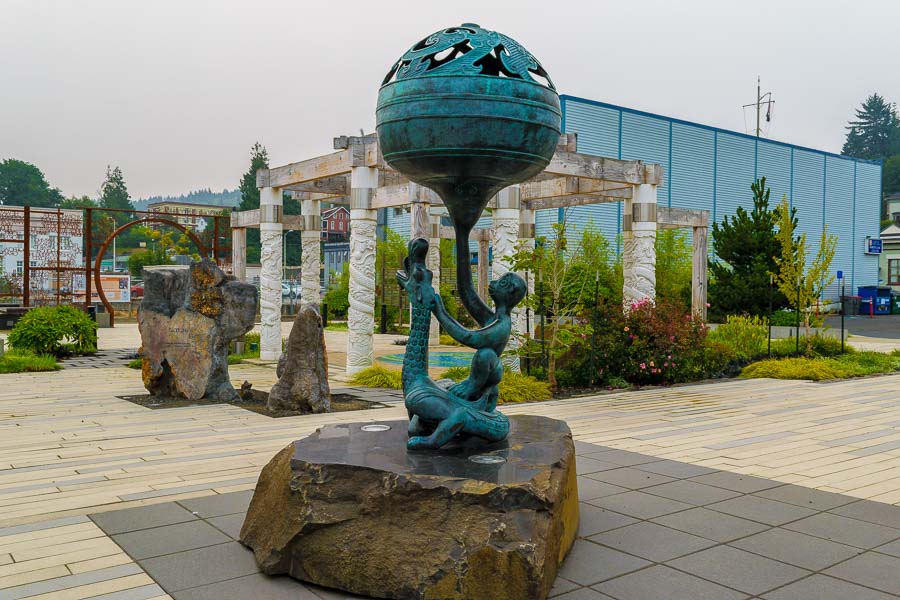 Cast bronze lantern in the style of an incense burner

This was just a small portion of our day exploring Astoria. JBRish.com will soon have more stories about Astoria and other adventures in Oregon.