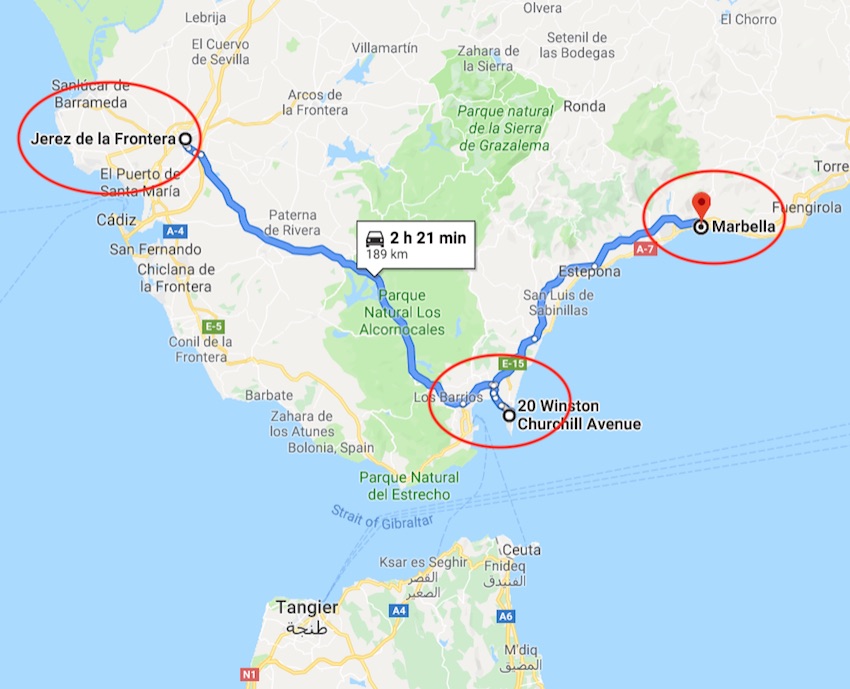 The day was still young when we once again boarded our bus leaving Jerez and heading toward our overnight destination; the Mediterranean seaside town of Marbella, Spain. This was a very busy travel day which began early.

Before we would arrive at our accommodations for the next two nights, we were going to take a quick tour of picturesque Gibraltar.


HOW THE BRITISH GAINED CONTROL OF GIBRALTAR

Gibraltar was captured by the British Fleet in 1704 during the war of the Spanish Succession. On 4th August 1704, an Anglo-Dutch fleet under the command of Admiral George Rooke took Gibraltar from the Spanish. From dawn on that day and for the next five hours, some 15,000 canons were fired from the fleet into the city. The invaders, led by the English majority, landed the same morning and not surprisingly encountered little opposition.

Via Historic UK – learn more at the link!

As we approached Gibraltar, the famous “rock” came into view and the waters of the strait of Gibraltar provided a fitting backdrop. 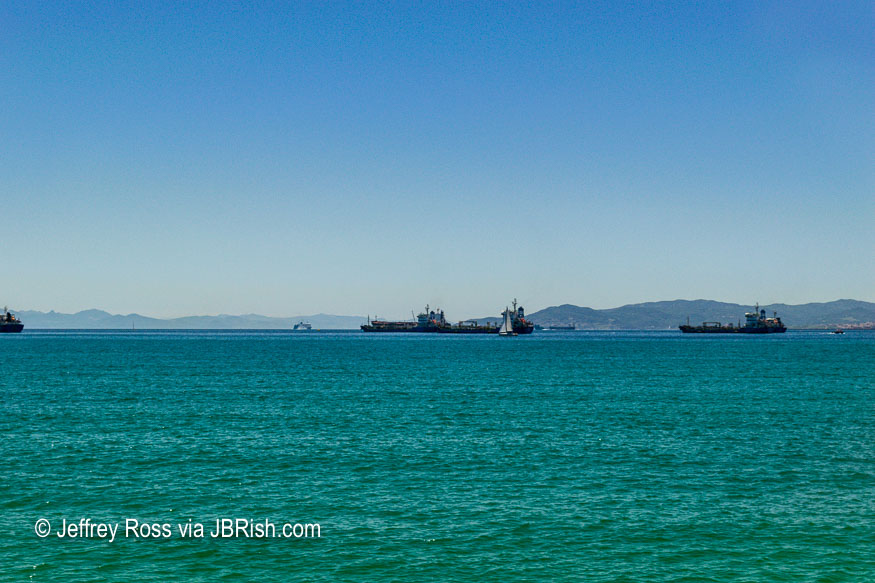 The shipping lane was busy with ships laden with their various cargoes. From the same vantage point along the road, we were able to view the Rock of Gibraltar in all of its glory. 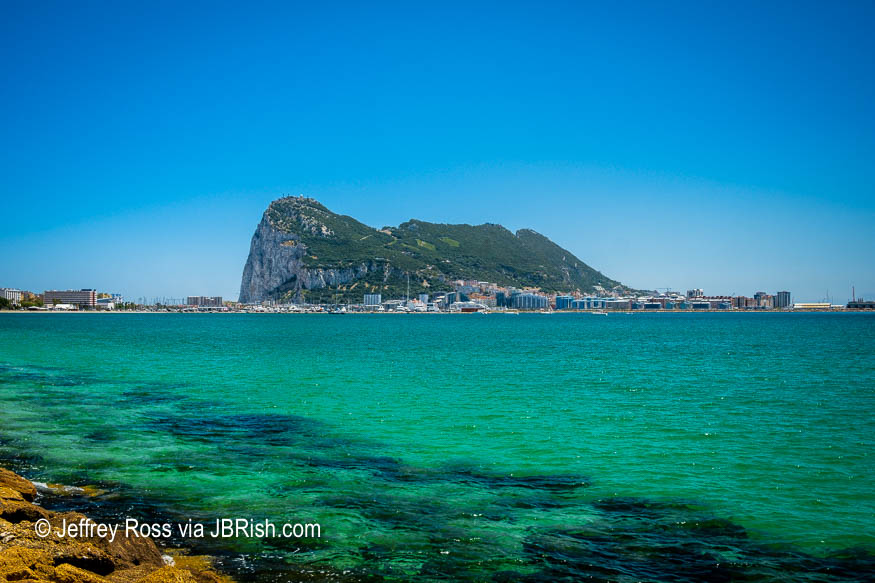 Once our traveling companions had snapped their share of the landmark. photos, we quickly made our way back to the bus and headed for the entry checkpoint with passports in hand. 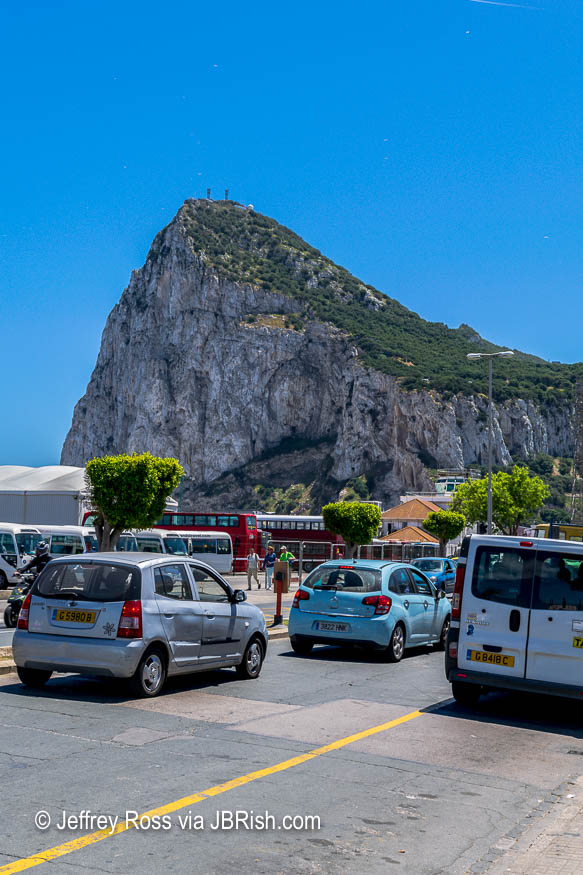 I must confess that I knew nearly nothing of what tourists might want to see prior to our tour of Gibraltar and I was pleasantly surprised. Once across the border and after we connected with a local bus driver/guide, we pulled into a waterfront rest stop known as Europa Point.

Forget the sodas, snacks and ice cream! This is a beautiful, photogenic landscape at the very tip of Gibraltar overlooking the strait. On a clear day, visitors can see Africa as we did. Apparently this is the most narrow stretch of water separating the two continents.

The colorful lighthouse against the green-blue waters caught my immediate attention; stunning! 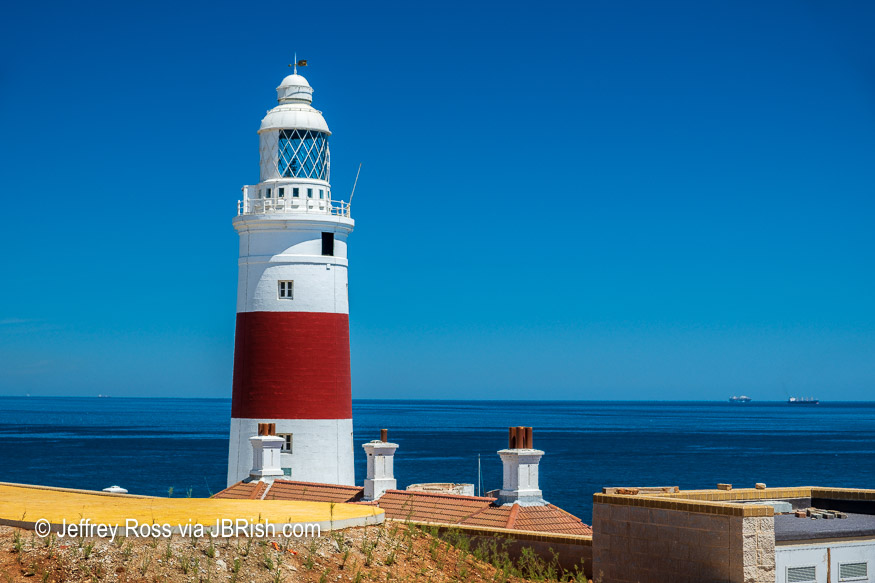 Also picture worthy was the ongoing construction of the Ibrahim-al-Ibrahim Mosque. Not only is it the the southernmost mosque in Europe, it is reportedly one of the largest Mosques in a non-Muslim country. King Fahd Al-Sau gifted this holy shrine to the people of Gibraltar and the world in tribute to the Moorish influence in the area. 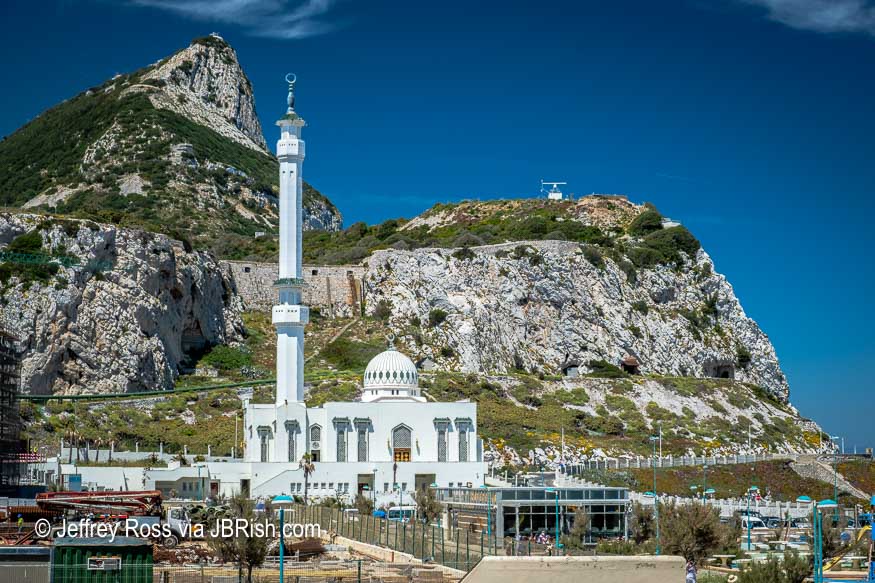 Since our visit a year ago, the mosque has been completed. You can read more about it and see current photographs HERE.

After our rest stop, it was back on the bus with our very clever, funny and informative driver/guide. Our target was the Cave of St. Michael and the famous Barbary Macaques (think monkeys) that are protected and roam the area.

Here is a brief history of the Macaques in Girbaltar:

“The macaques’ presence on the Rock gained popularity during the Great Siege of Gibraltar between 1779-1783, during which Spain and France launched an ongoing assault upon British Gibraltar by sea and land. One surprise attack – so the legend goes – was thwarted by the monkeys who were disturbed in the night, and in turn alerted the night watch to the attack. This legend gave rise to the saying that as long as the monkeys remain on the Rock, so will the British. It is also known that General George Eliott, a governor of Gibraltar in the late 1800s, would not suffer apes to be molested or taken.”

via The New Statesman – learn more at the link. 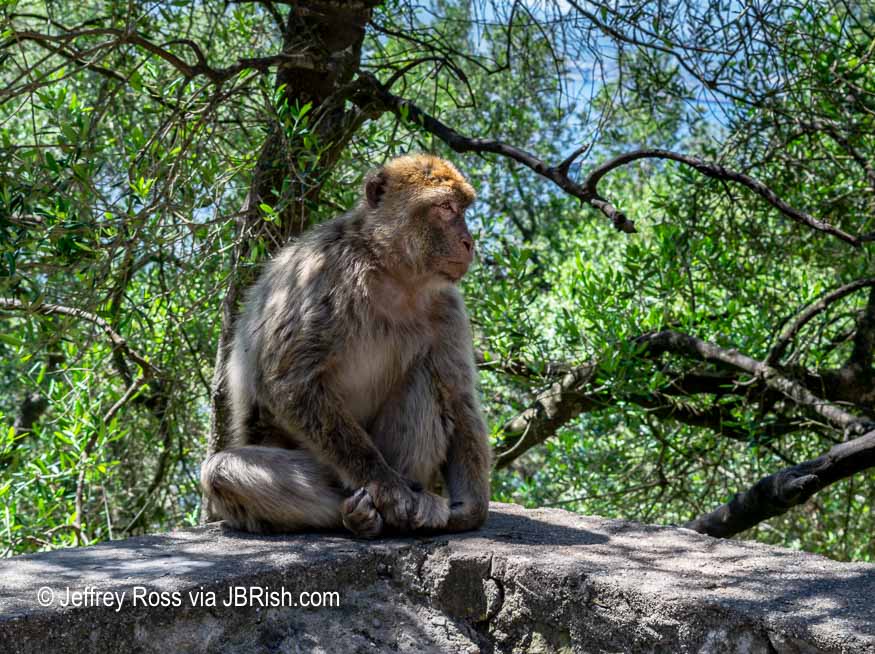 We were rightly warned to keep our belongings close as these clever denizens are quick to “steal” sunglasses, candy, ice cream or anything else they can get their hands on. One driver was very familiar to these macaques as they climbed on his window ledge to greet him as he passed by.

Visitors will want to take many pictures of the tribe as they are very cute and nonplussed by all the visitors. After all, they are the land barons at this location.

After taking several pictures, we ascended the walkway to the cave entrance. This is a beautiful cave HOWEVER, the natural structure and beauty of the attraction was, in my estimation, diminished by the use of strobe-like lights that continually changed color and cast hues across the cave formations. In addition there was music blaring in the background. 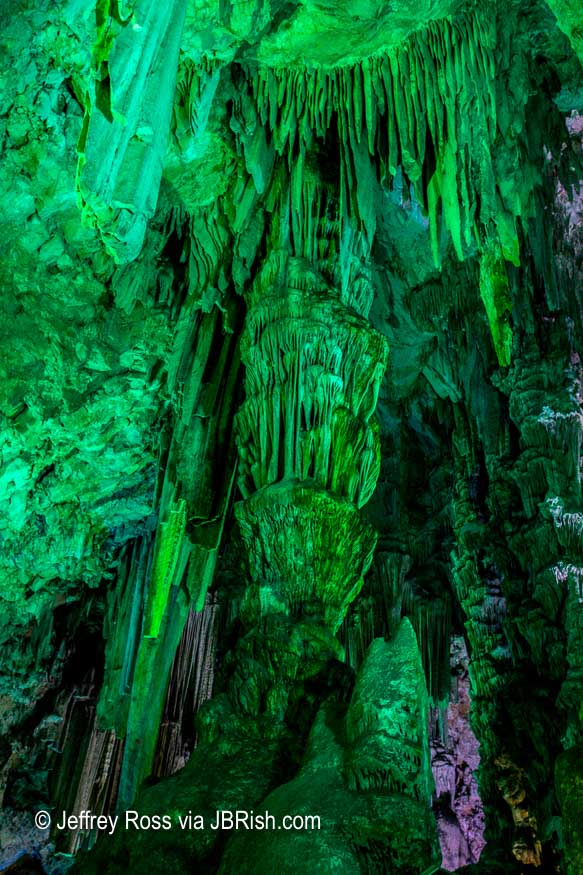 There really was no need for this as the natural beauty of this cave would certainly “speak for itself.” It was something to behold, but denigrated to a gaudy status. Sorry, but that is how I feel.

I was able to capture slightly more natural pictures during the lighting changes. You can see the color change shifting at the bottom of the frame. 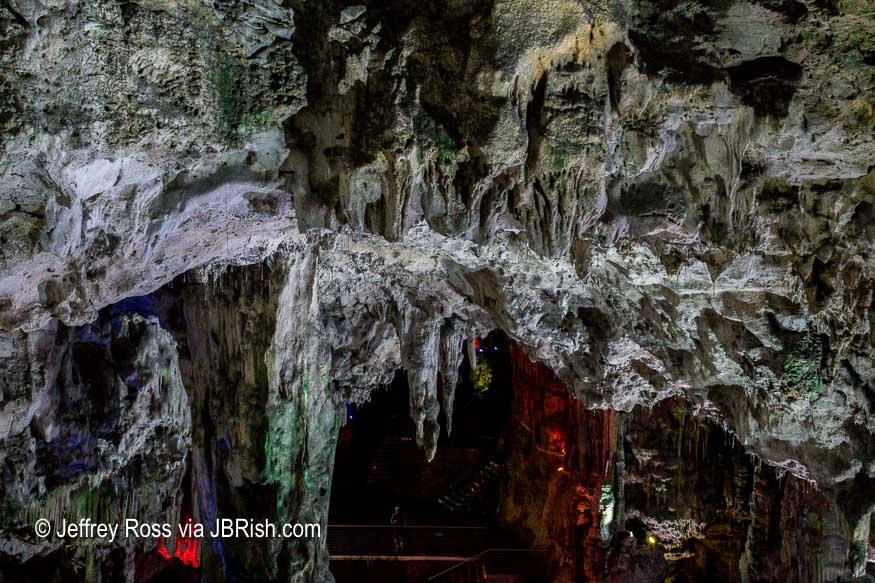 After exiting the cave via a series of well constructed pathways, there was a bit more time for additional monkey business. 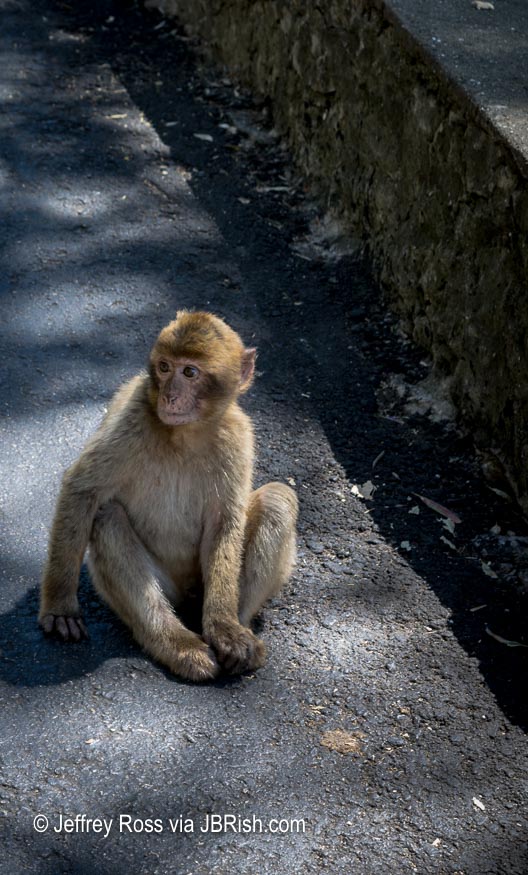 This was a fun stop and I recommend it if you have a chance. The history is unique and interesting and the natural attractions are certainly worthy. 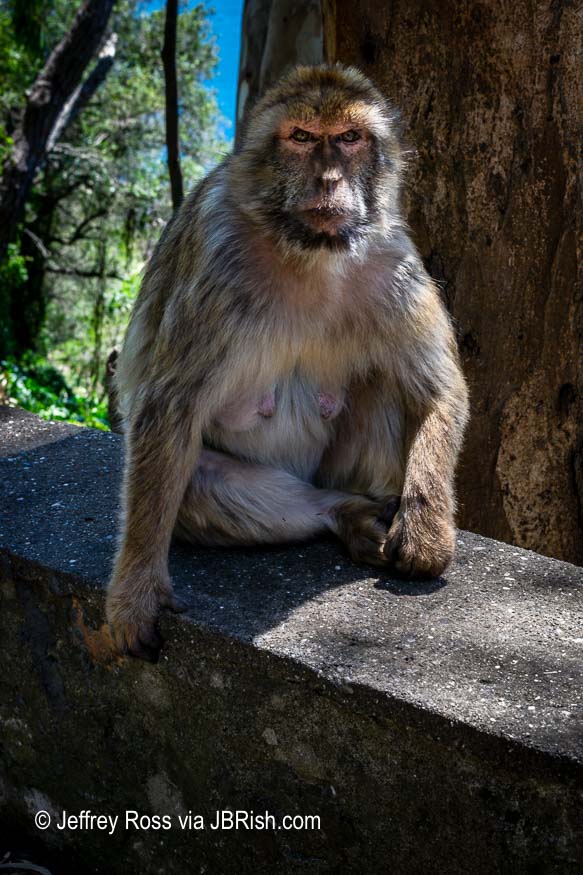 Perhaps one of the best angles of the Rock of Gibraltar was from our bus window as we passed along the roadway traveling toward Marbella and a well-deserved rest! 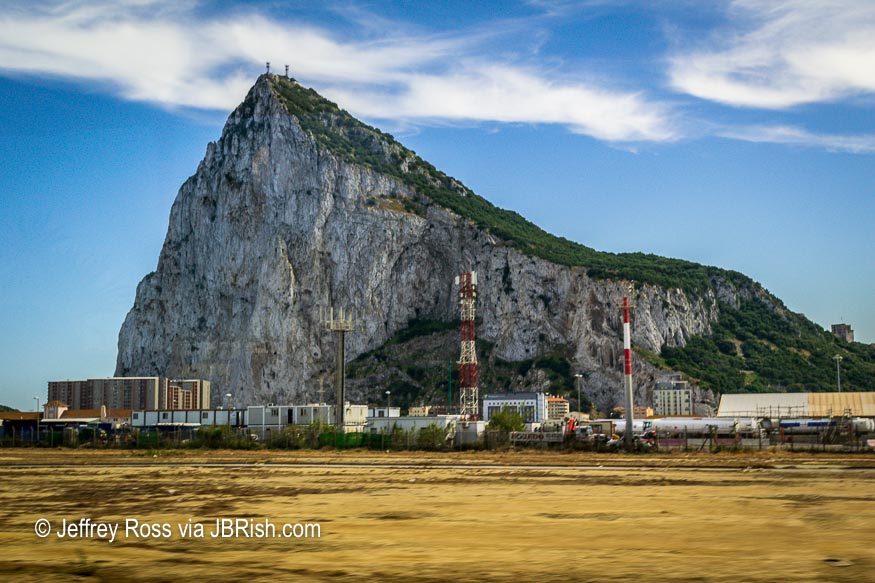