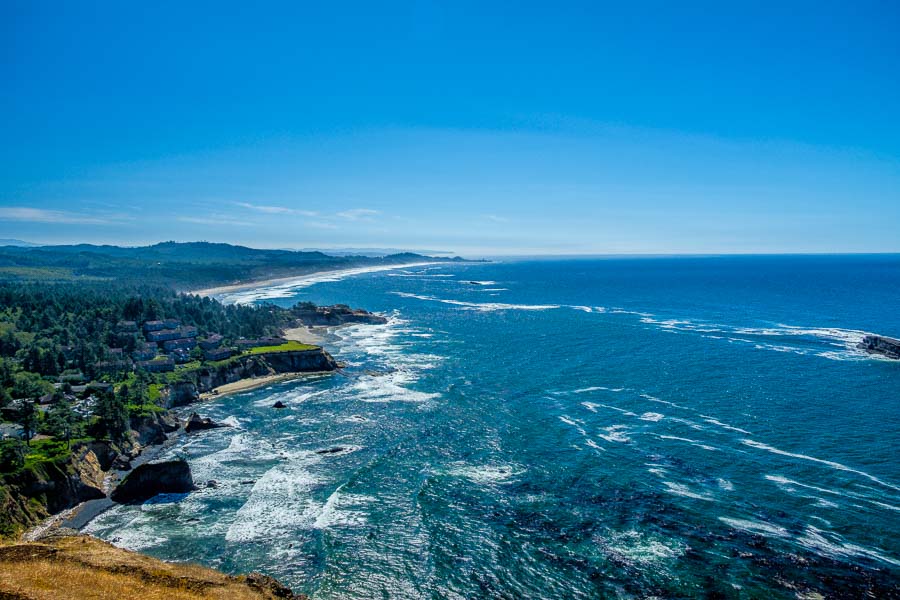 One would think that traveling down the Oregon coast and looking at the coastline, rock formations, ocean vistas, etc. would get tiring after a while, but that was not the case. Each area seemed to have a different personality and although the various components were similar, it was this “personality” that made it distinct and interesting.

Cape Foulweather was no different. 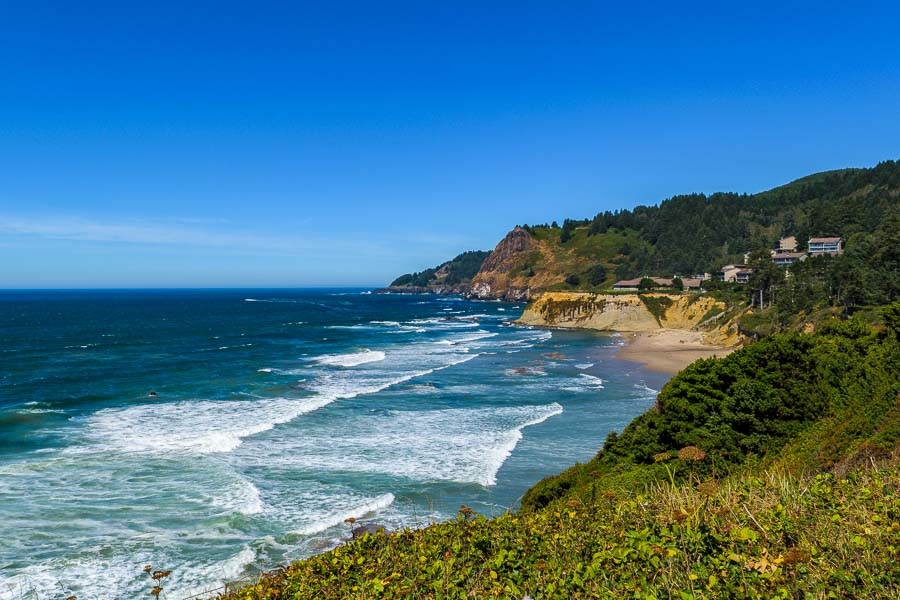 The vista from the Otter Crest Loop was long, wide and swept northward with soothing wave motions covering the small sandy beaches. The landscape was dotted with houses which contributed additional points of interest for onlookers.

The shoreline was elevated at this location and the cliffs were striking. 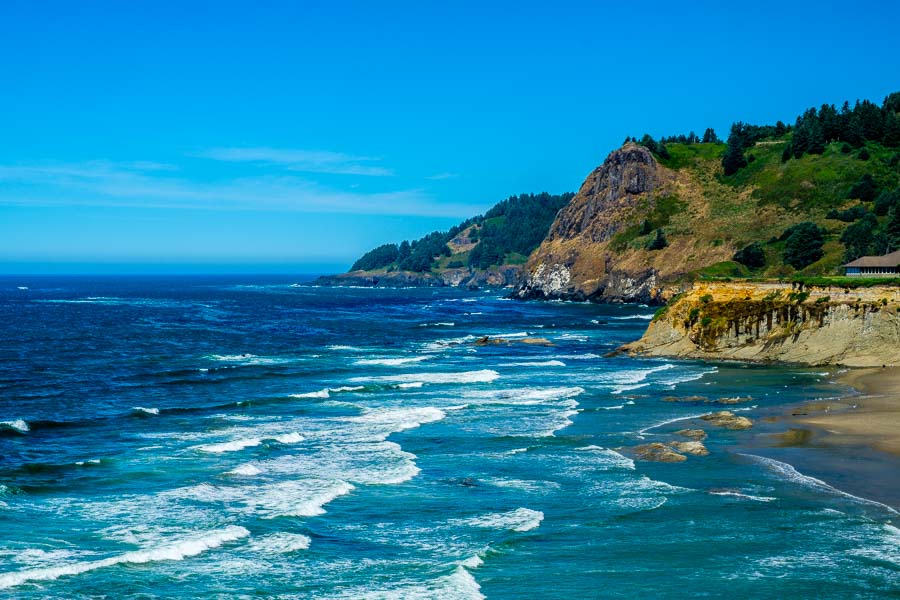 Otter Rock is one prominent formation just off the shore, but quite large and visible. 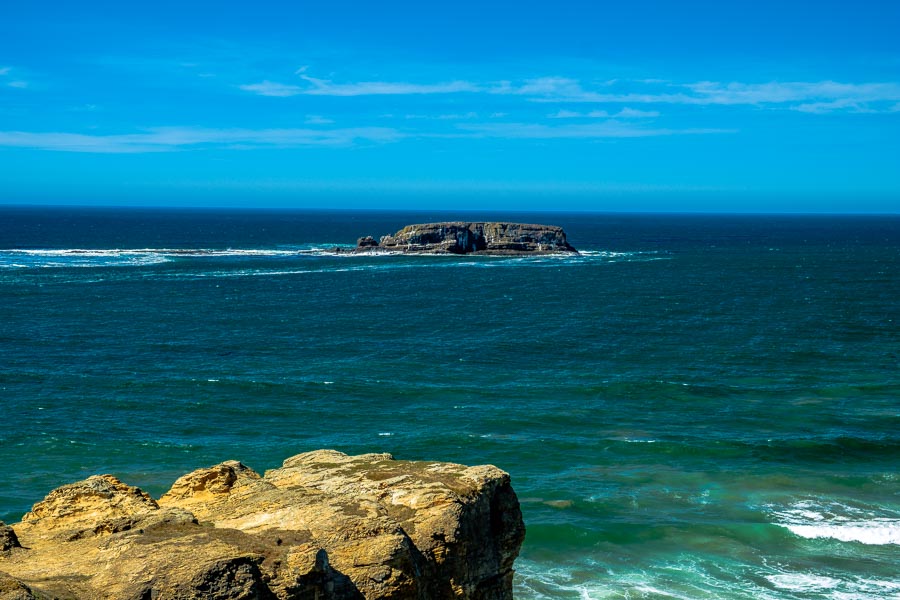 Some of the houses were quite close to the lookout and had extraordinary views of the bay. 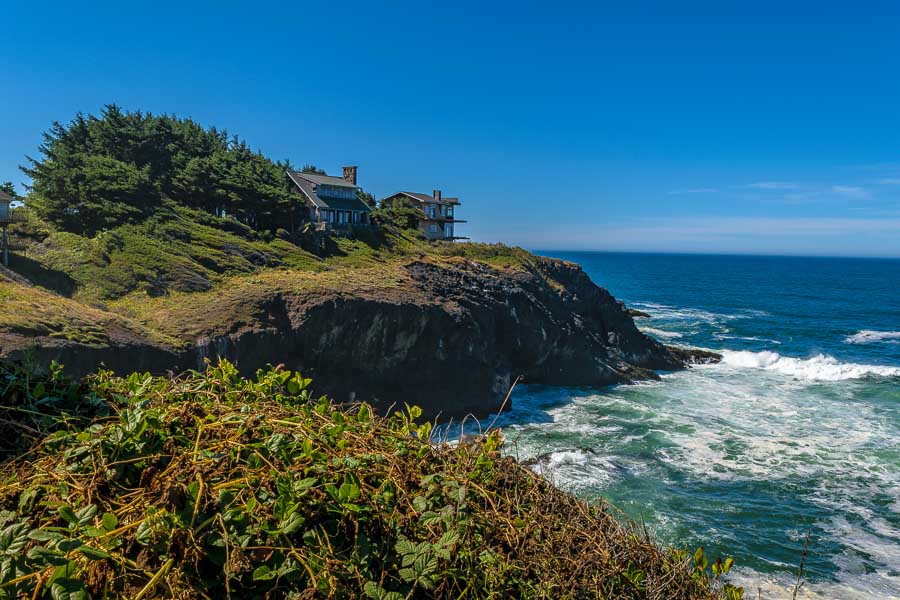 One intriguing attraction was the Devil’s Punchbowl. Who could resist a stop there? 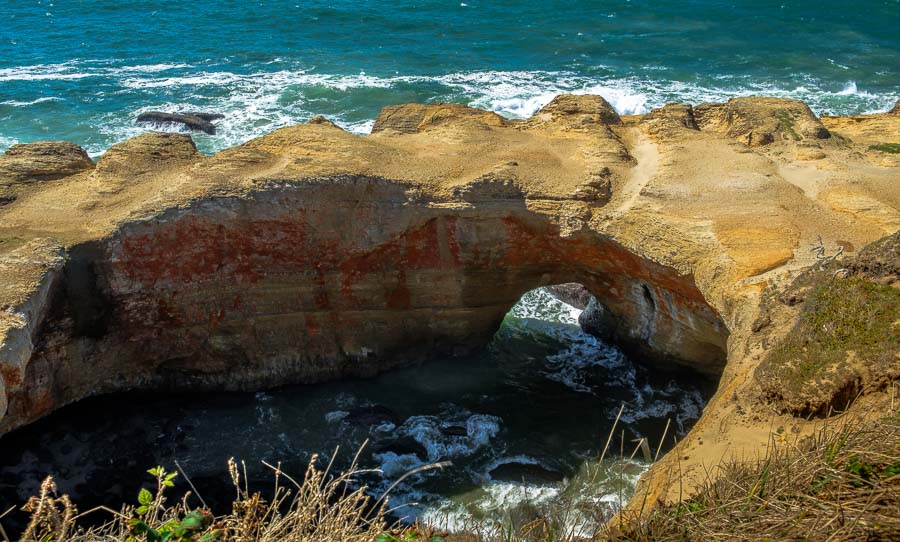 During a storm the water pounds through the hole. The red markings and ocher sandstone added interesting contrasts. 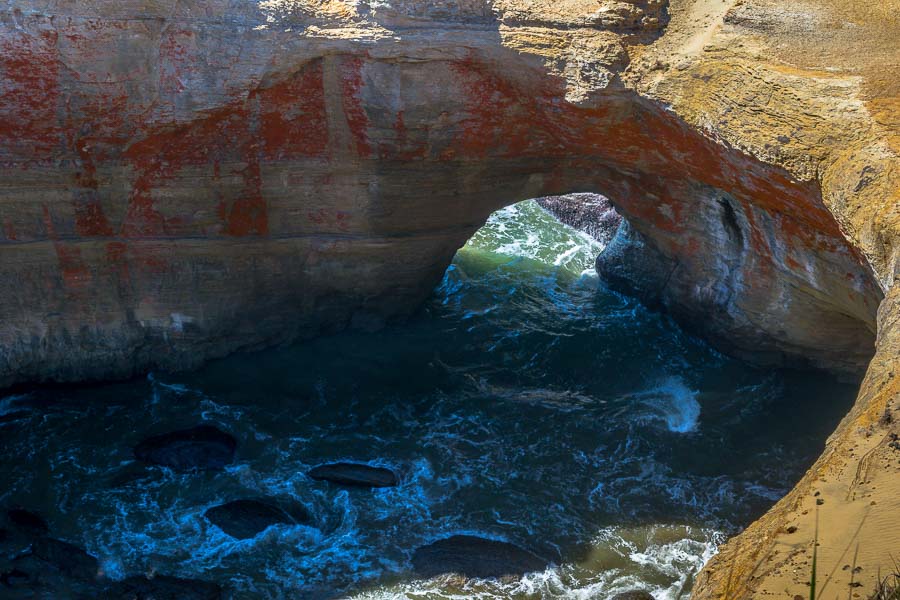 Another anticipated stop in the area was the suspension bridge at Drift Creek Falls. When we first arrived in the parking area, there was a notice that the trail was closed because of construction and there were stones alongside large piles of dirt in parts of the parking lot. We were relieved to realize that the construction had not yet begun and the trail was still open.

We hiked through a heavily wooded area and the filtered light seemed to color everything with a golden hue. 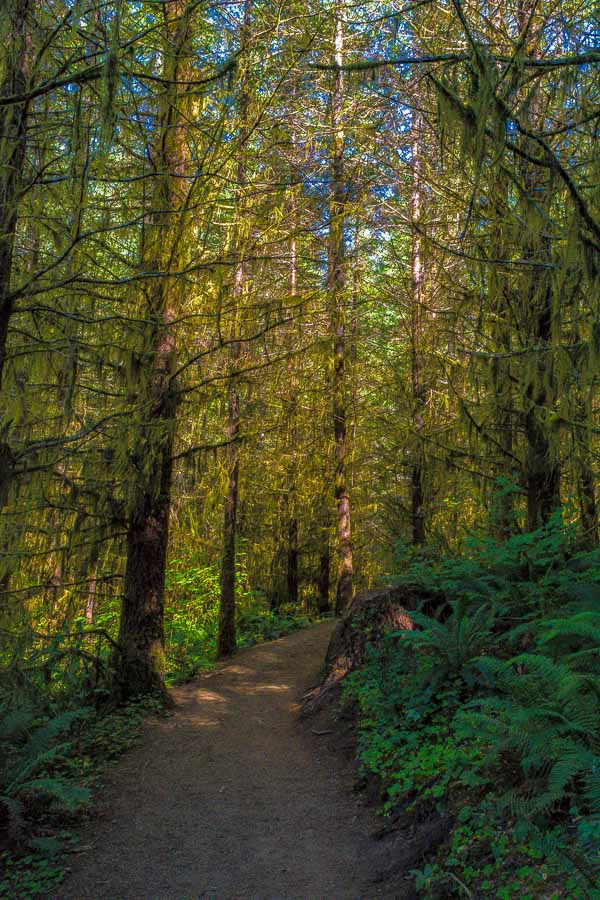 This was a very sturdy suspension bridge so even those who are not fond of this type of experience should have little hesitation. The metal sekelton was quite solid and the bolts working to hold the bridge steady were huge. 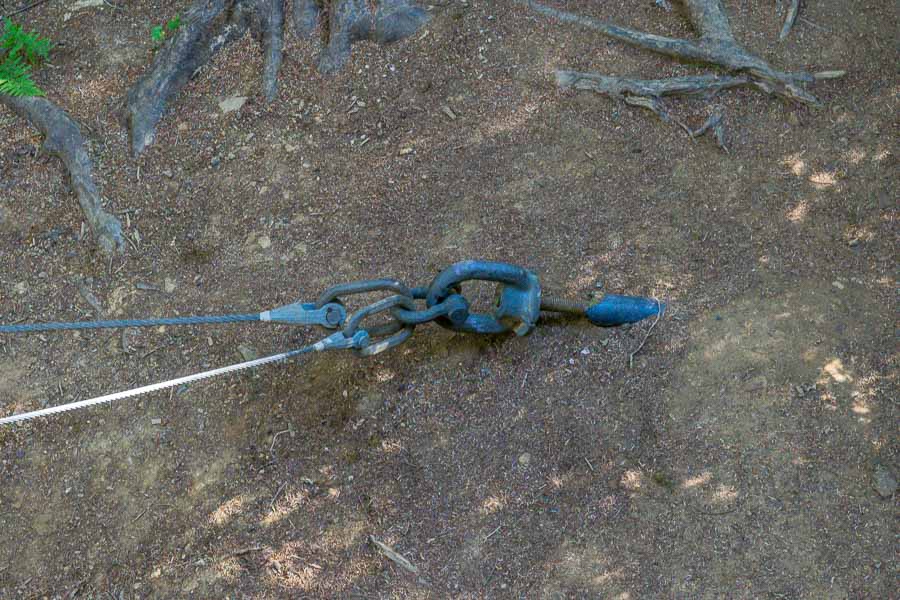 Here is a shot of the superstructure with details of the beams and support braces. 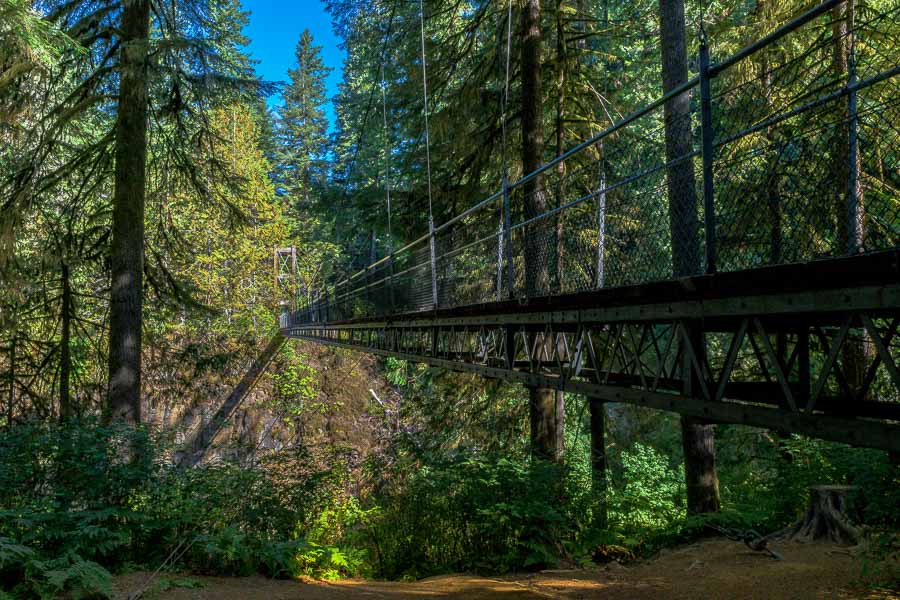 The large cables can be seen; one in the bottom left and another on the right-hand side. These help keep the bridge very steady. 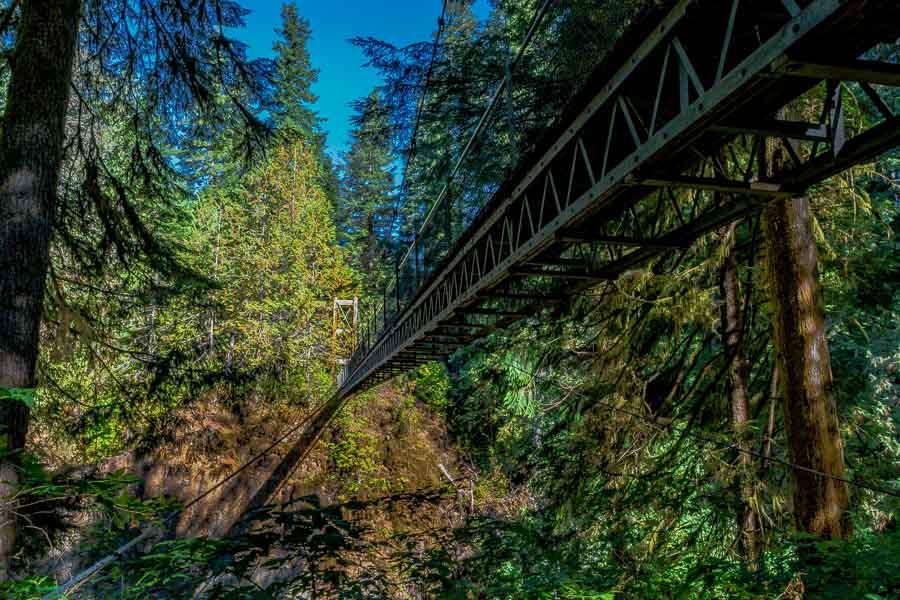 The bridge is not the main attraction. The falls themselves draw much interest although during our visit they weren’t too impressive. Rather small with a moderate amount of water, they were hard to photograph from the nearby vantage points. At full flow after or during a storm, they would probably offer a more profound presence. 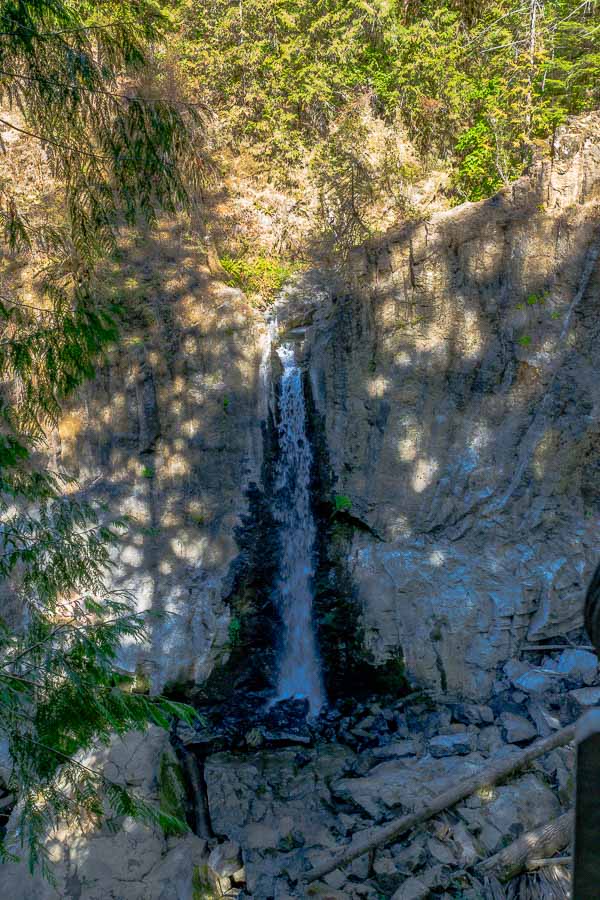 I was able to walk a bit of the way down the hill toward the waterfall and take a more photogenic shot. 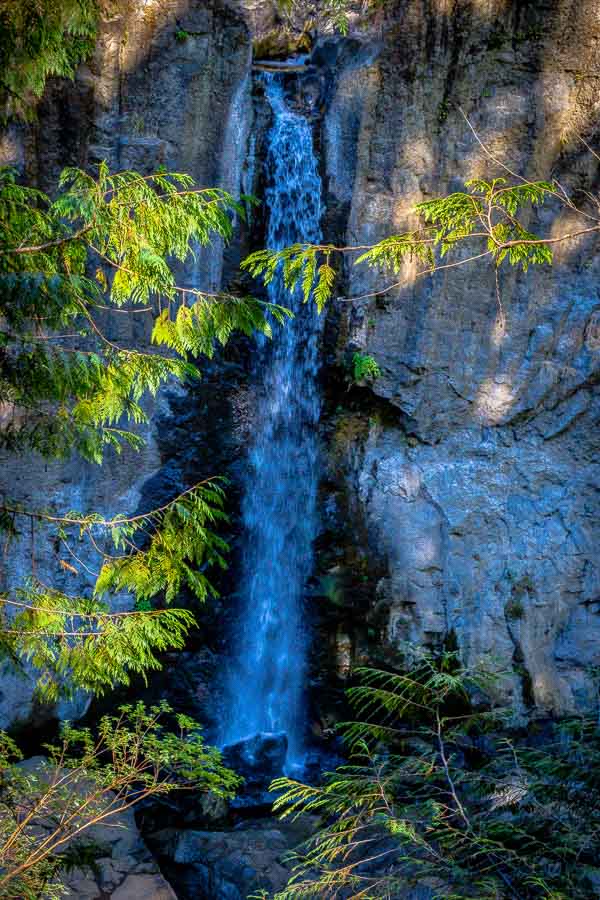 We walked a bit and then headed back to the car in anticipation of our next adventure along the Oregon coast!