One of our most anticipated forays while we were visiting Tokyo was a one day journey to Mount Fuji. It was no problem rising early in the morning to catch the sunrise in expectation of the adventure ahead. 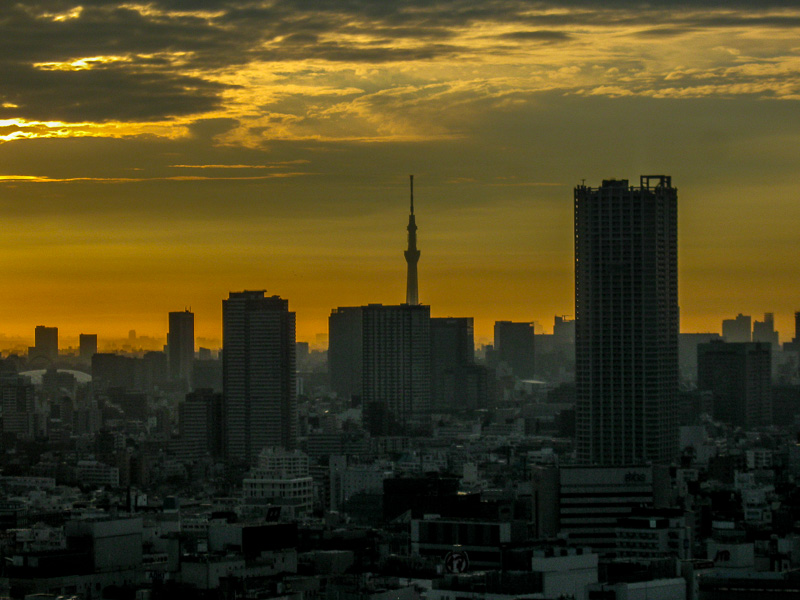 We took a short bus trip to the larger transportation terminal where we picked up our guide for the day and boarded a pleasant motor coach. As we left Tokyo proper, we passed the Tokyo Tower (not to be confused with the Tokyo Skytree) 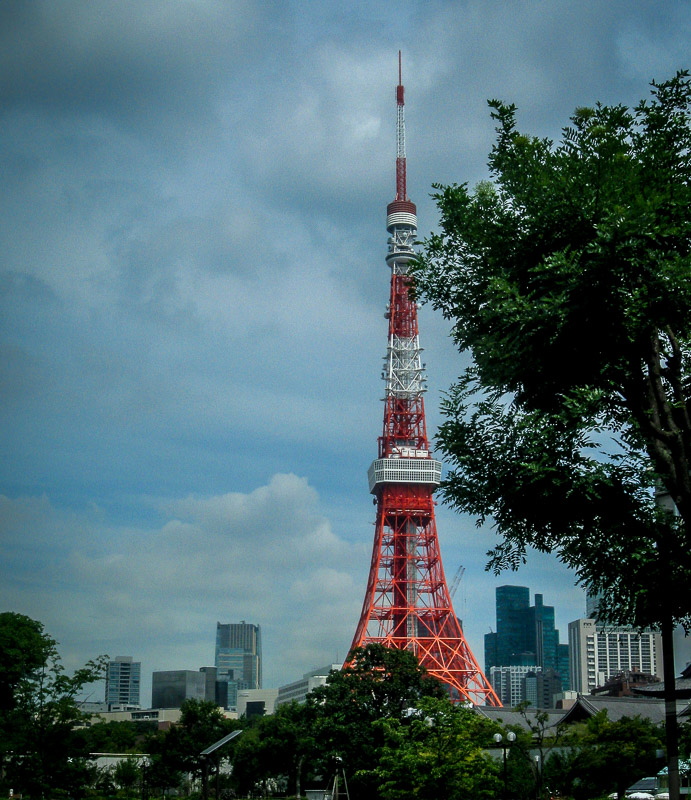 On the bus ride to Mt. Fuji we were educated and entertained by our energetic docent. One of the facts she told us was that Japan is quite mountainous – “More than 50% of the country is mountainous and covered by forests.[emphasis mine]”* 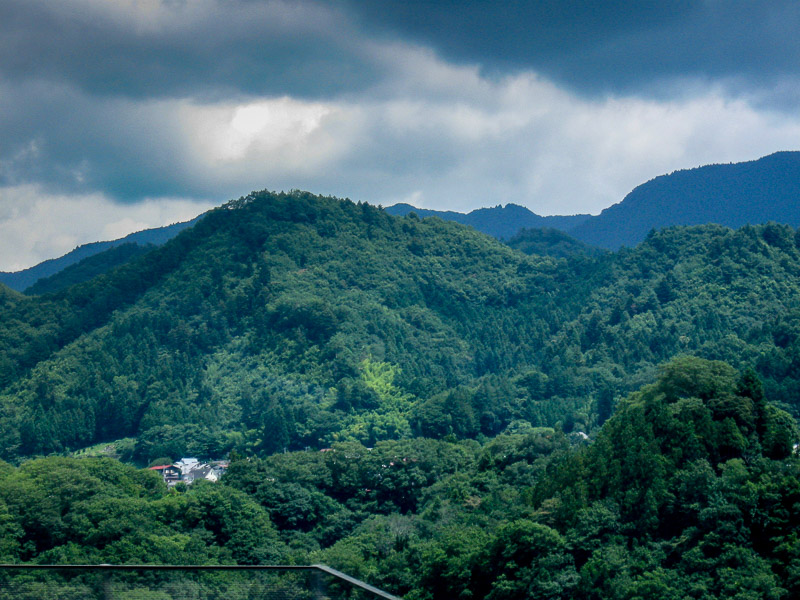 Here is a picture of our guide, Marie, explaining family customs and routines in Japan. She had a flip pad with drawings to highlight key points. 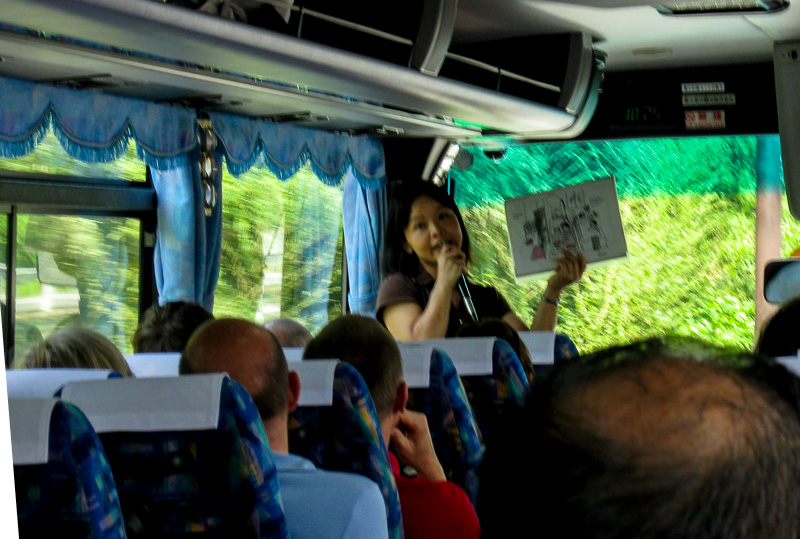 As we approached Mt. Fuji we could tell that clouds and fog were setting in and that visibility would probably be poor. This is what it looked like at one of main staging points for those who want to hike the volcano. 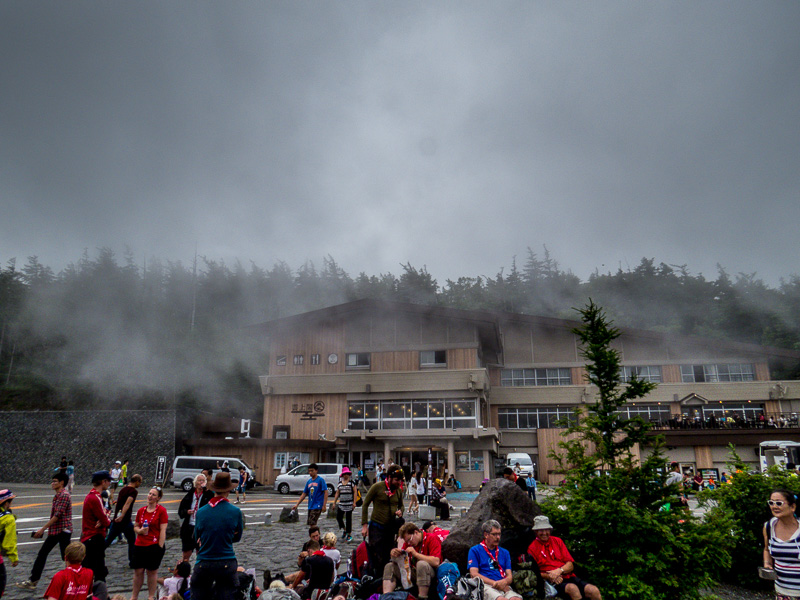 Some of the hikers were warming up or getting ready by doing some exercises. 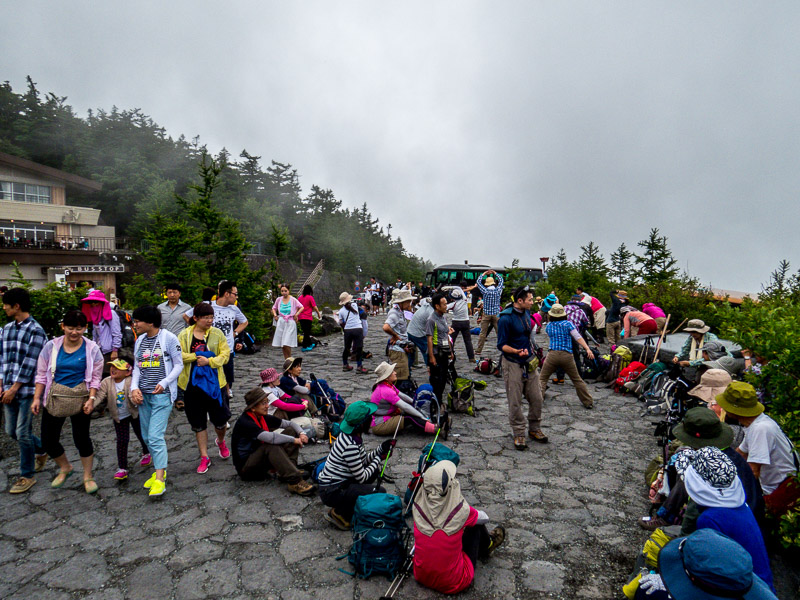 While others reserved their strength for the climb ahead or perhaps resting while recovering from the climb they just finished! 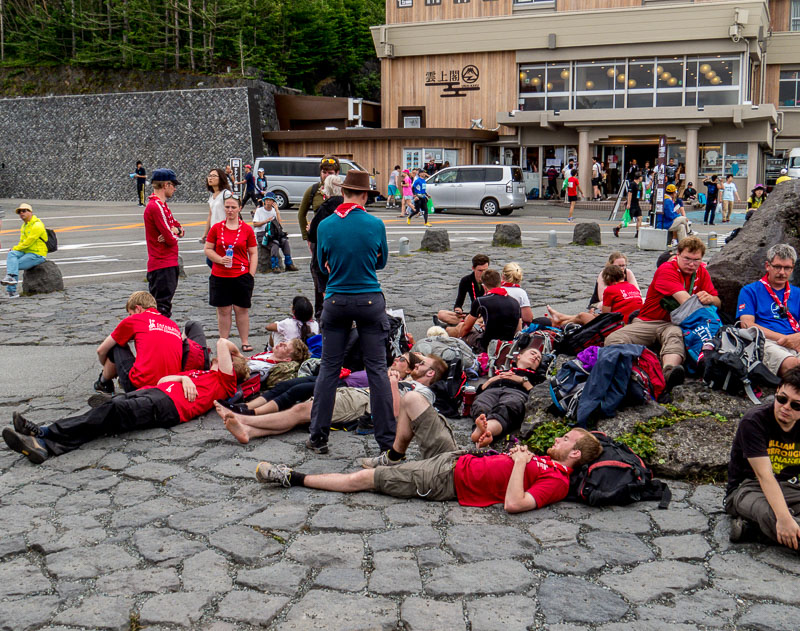 After a brief stop at the visitor center and souvenir shop, the bus headed down the mountain. Luckily, as we reached one point, the sky cleared and Mt. Fuji became visible. 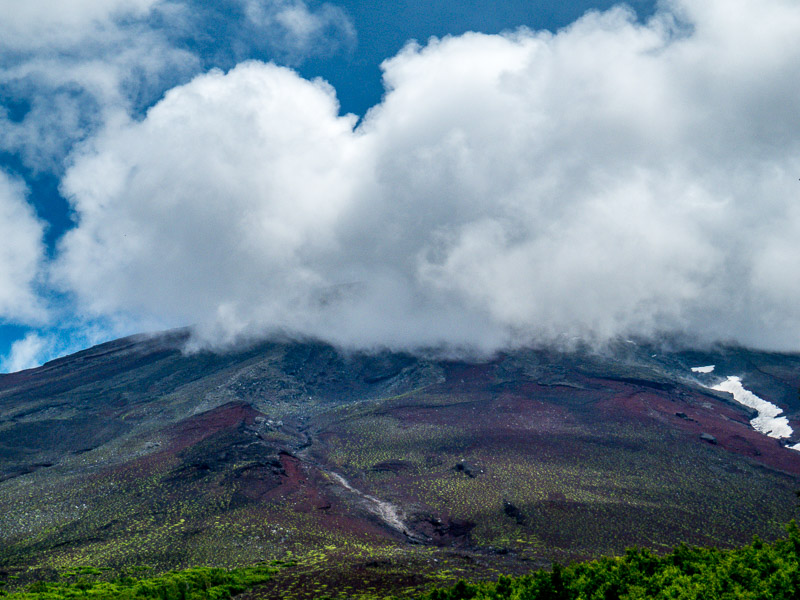 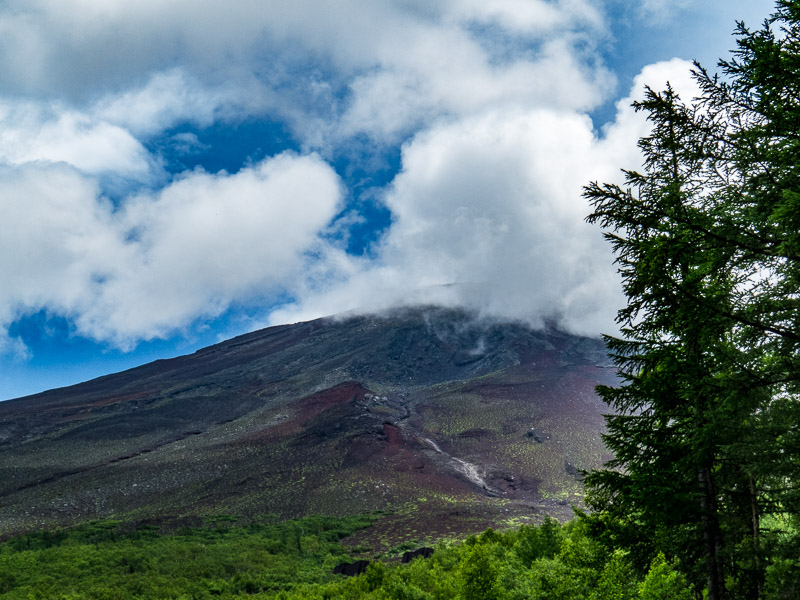 We were glad to catch this glimpse of the volcano as many of this day’s visitors were not so lucky. We headed to a town (which may have been Kawaguchikocho, but I am not sure) on the coast of Lake Kawaguchi where we had a traditional Japanese lunch.

During our Japan tour, we generally did not eat the raw fish, but the pot-like structure in the upper-left was actually set atop a heat source and was boiling. This was a tasty enough broth with noodles and vegetables. There were also other vegetables and cracker-like offerings on the prepared tray. 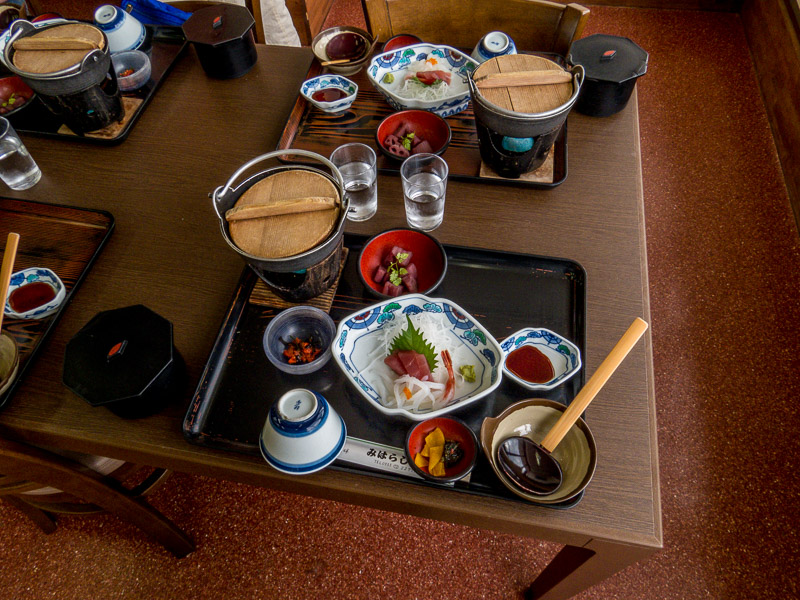 This was one of the first places we stopped that did not have a western-style bathroom. This is a more traditional Japanese unisex toilet. All personal business is done here mostly by squatting! Many attractions and more popular locations have both types of toilets from which to choose. 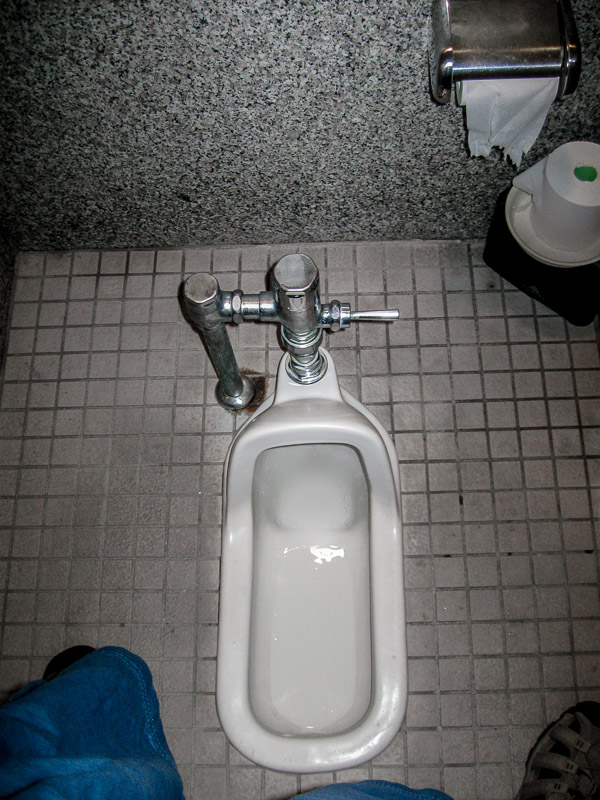 NOTE: At our hotel, we had what could only be referred to as the Cadillac of toilets. This appliance had more buttons and gizmos than some entertainment systems. It had a heated toilet seat; amazing!

After lunch we took a walk along the street where one of our group purchased a lavender-flavored, soft-serve ice cream cone. 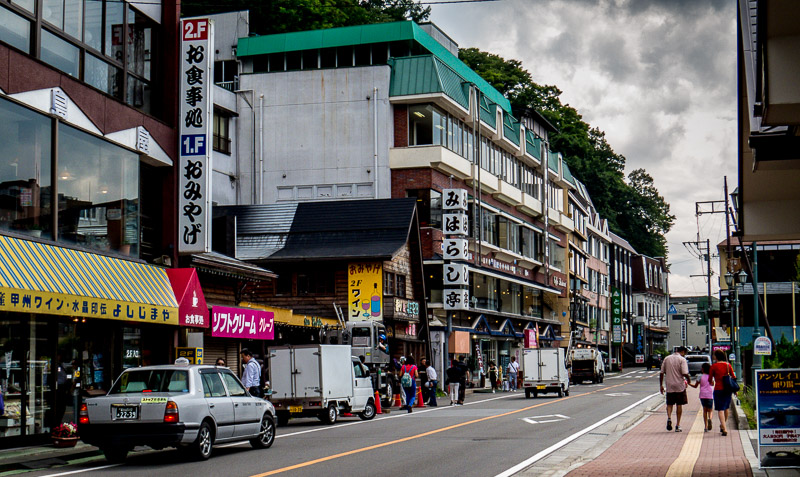 This town had a funicular which we were going to try to ride because it promised a distant view of Mt. Fuji. Lightning, however thwarted that plan. 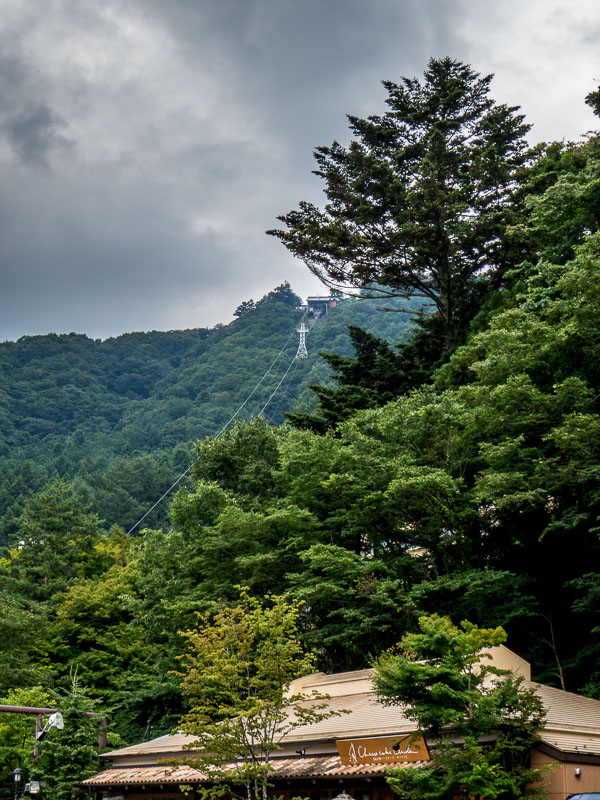 Before boarding the bus for our next stop, we took a quick jaunt down to the lake area. 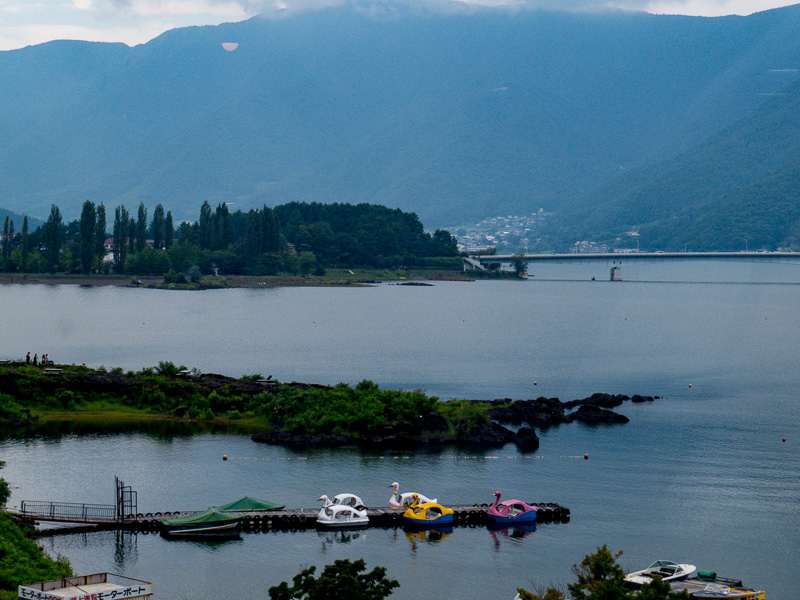 As you can see, there were swan boats (perhaps paddle boats) for hire during the more pleasant weather. 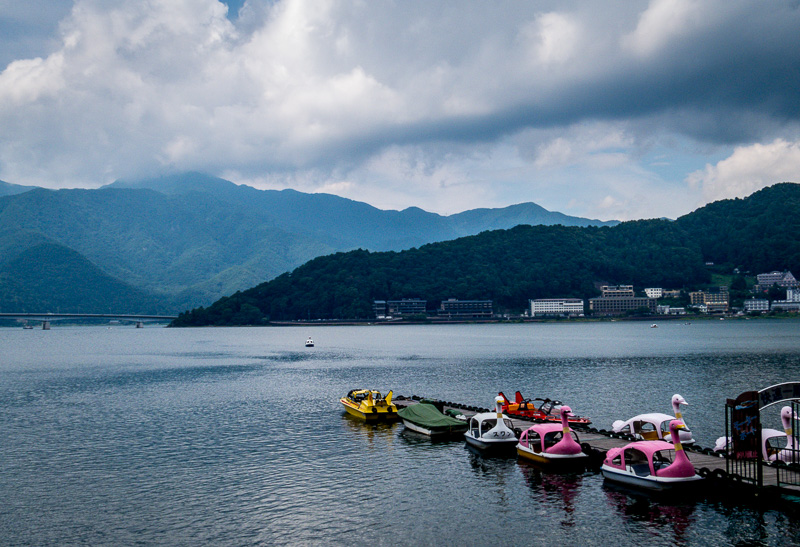 Little did we know as we boarded the bus that further views of Mt. Fuji were not going to elude us for the remainder of the day…