After we visited the Meiji Shrine in Tokyo, we boarded the bus and headed for the Imperial Palace East Gardens.

The Imperial Palace East Garden (Kokyo Higashi Gyoen Garden) stands on part of the former grounds of the Edo Castle and has been open to the public since 1968. The Imperial Palace is the official home of Japan’s emperor and imperial family.

Close to the Ote-mon Gate entrance to the garden is a statue of a Fire Fish (Shachi) which is used as a talisman to ward off dangers from fire. Edo, now Tokyo, had numerous fires and is sometimes known as the “City of Fires.” Fire Fish can be traditionally found on rooftops or near entrance ways. 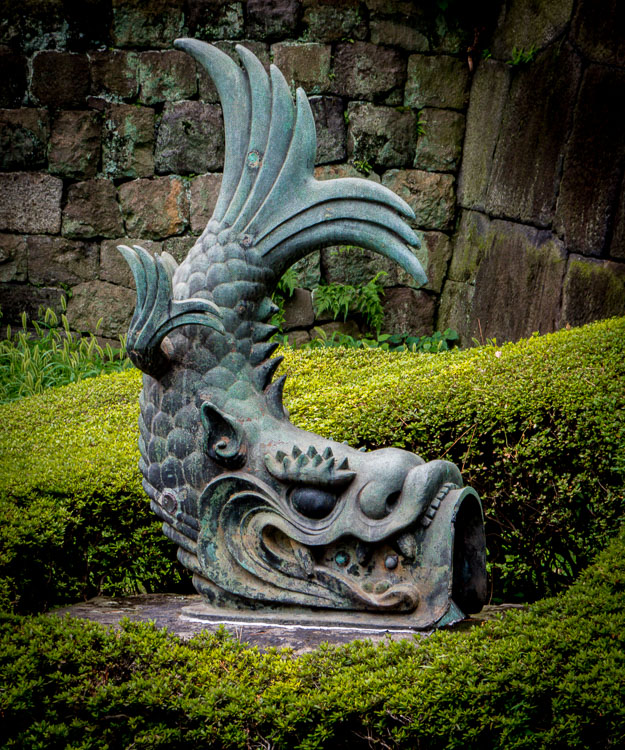 Remnants of the ancient stone wall used to protect the castle and which also served as part of original foundation now stand as the outer perimeter of the palace and castle grounds. 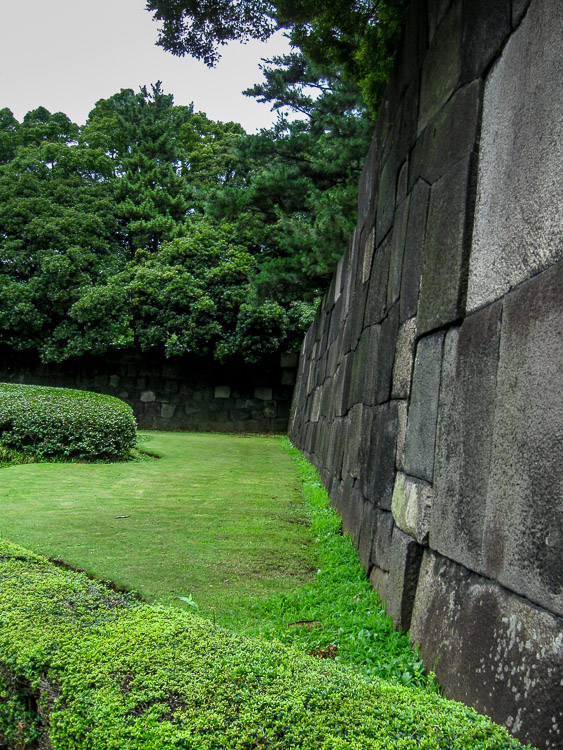 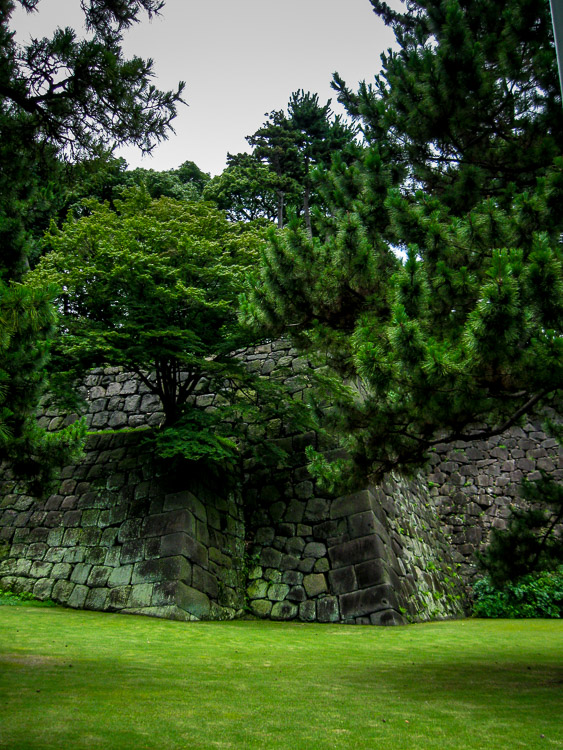 One of the guard houses on the garden/palace grounds. 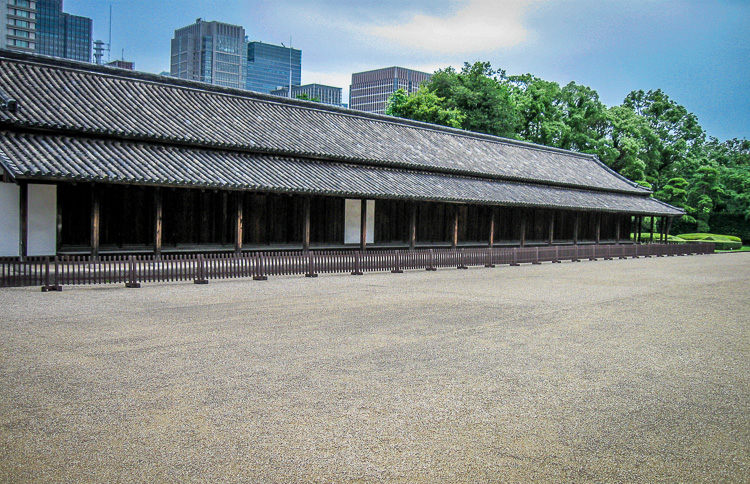 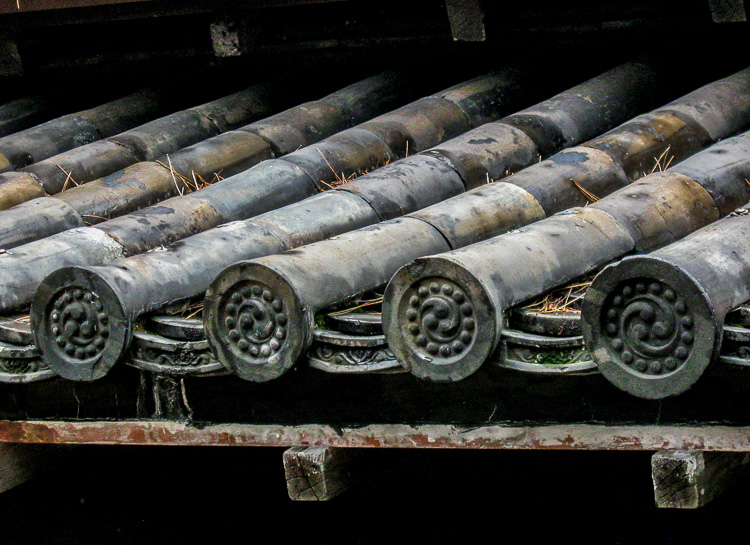 An ornate lamp post reminds us of the artistry of times since passed. 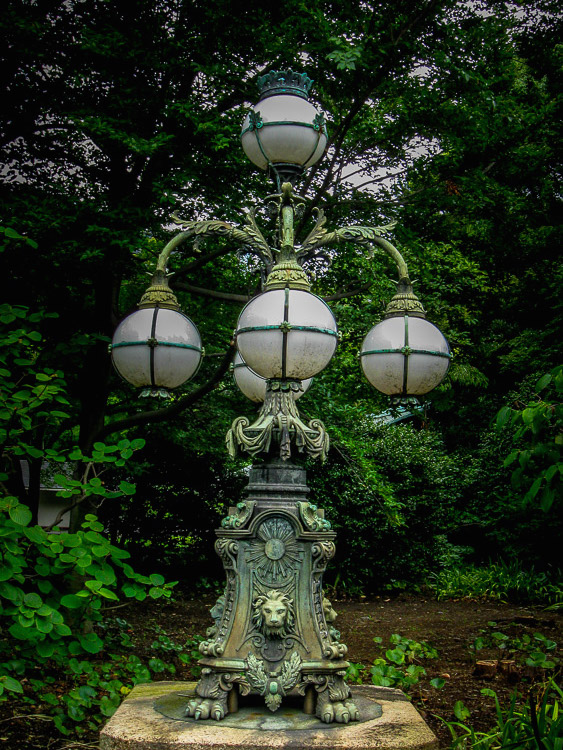 The shades of light and dark pink stood in contrast to the palette of greens. 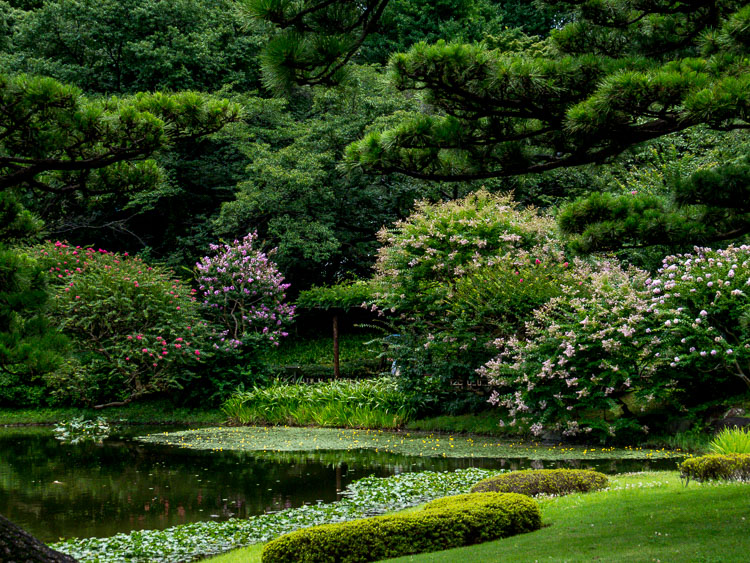 Many Japanese gardens contain a tōrō or “light basket.” These traditional lanterns can be made from a variety of materials such as wood or stone. Stone lanterns found their way to Japan from other oriental cultures and were originally used in temples and shrines as votives or to light pathways, but have since found a place as a more general purpose decoration. 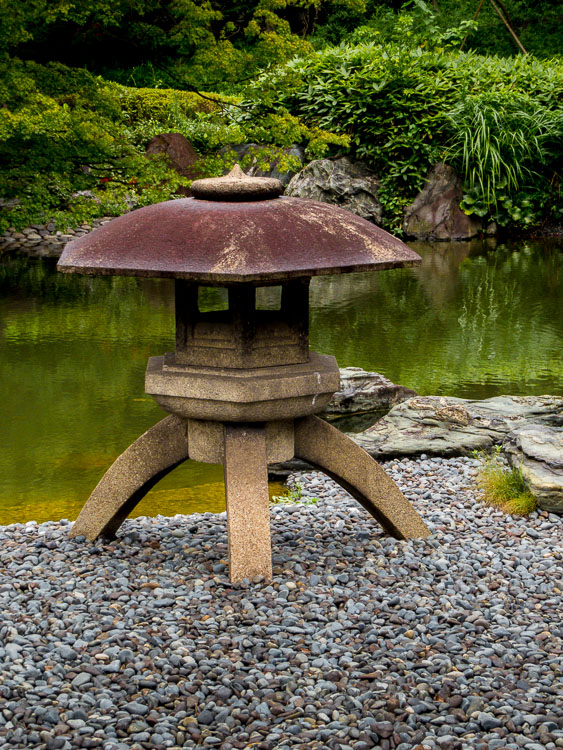 The beauty of the garden grounds, even on this overcast and rainy day, brought artists to the park. 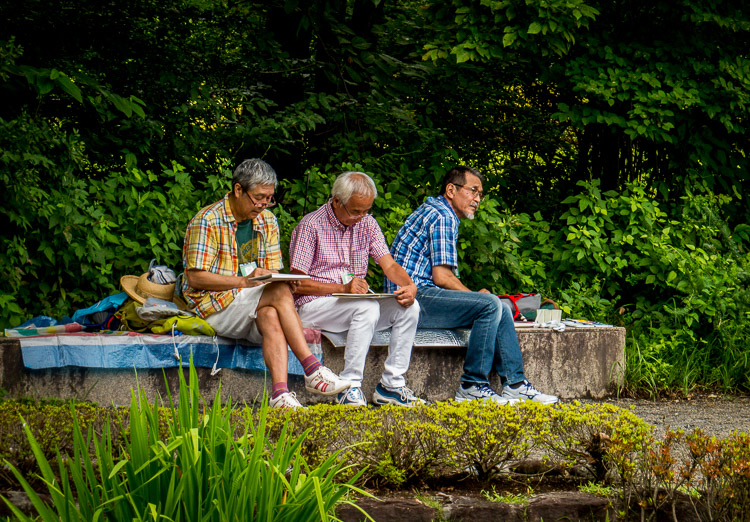 Another artist sits in harmony with the solitude of the pond. 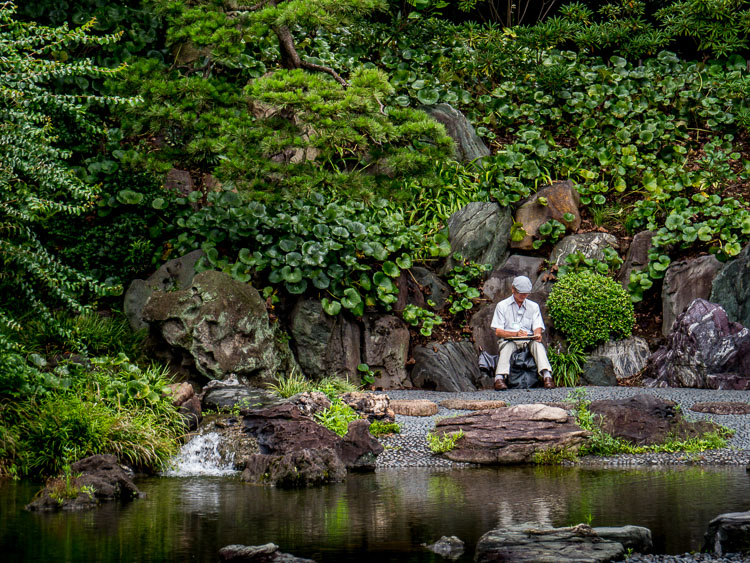 Nearby, koi could be seen swimming in and around a walking bridge. 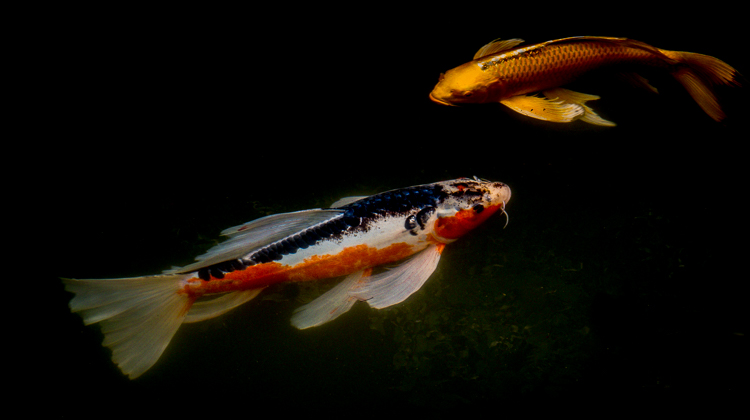 The Suwa no chaya is a tea house that was reconstructed in its original location in 1912 and moved to its current location when the East Garden was developed. 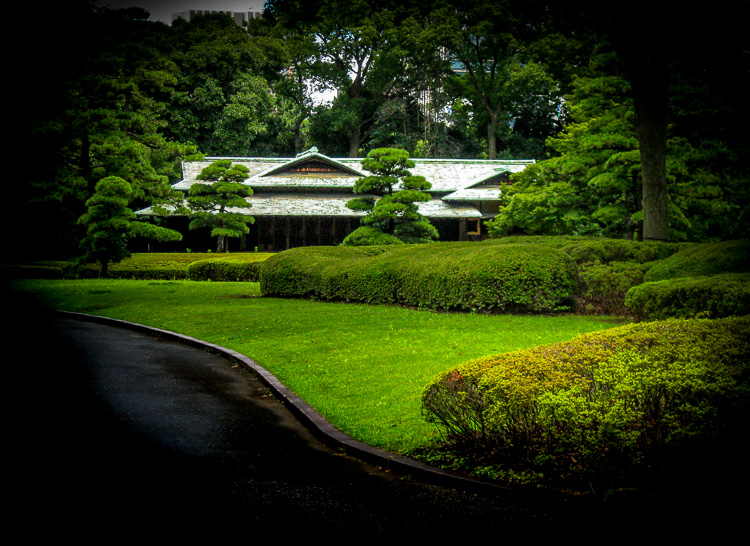 Among the gardens was a stand of bamboo. 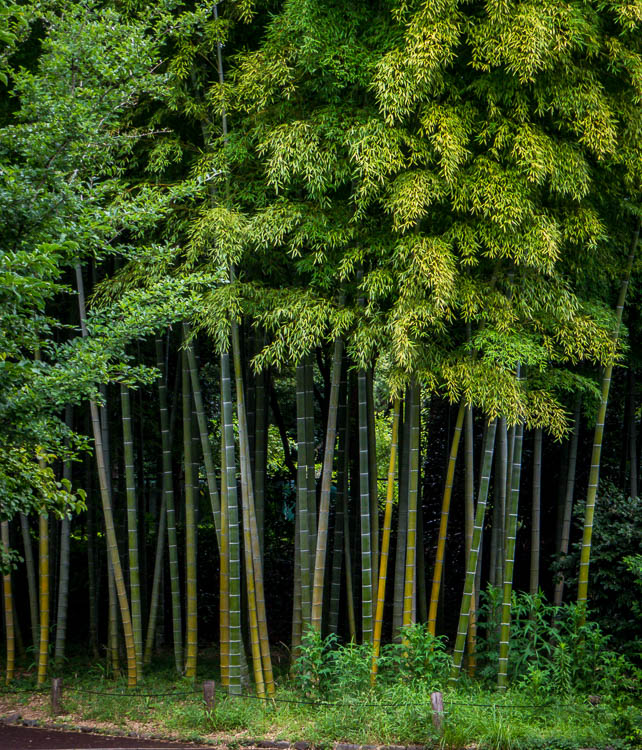 A closer view reveals the variety of colors and textures. 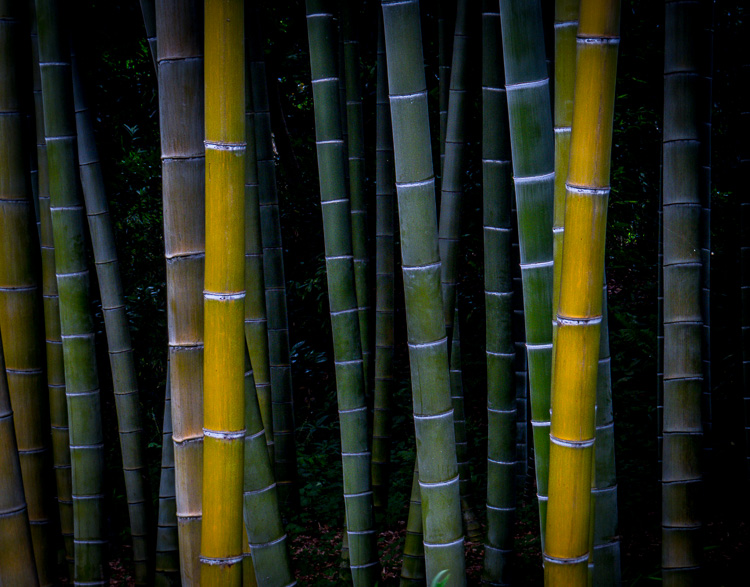 A groundskeeper’s bicycle with an old-fashioned broom, still used to sweep the grounds in many of the Japanese parks, awaits the trip hoome. 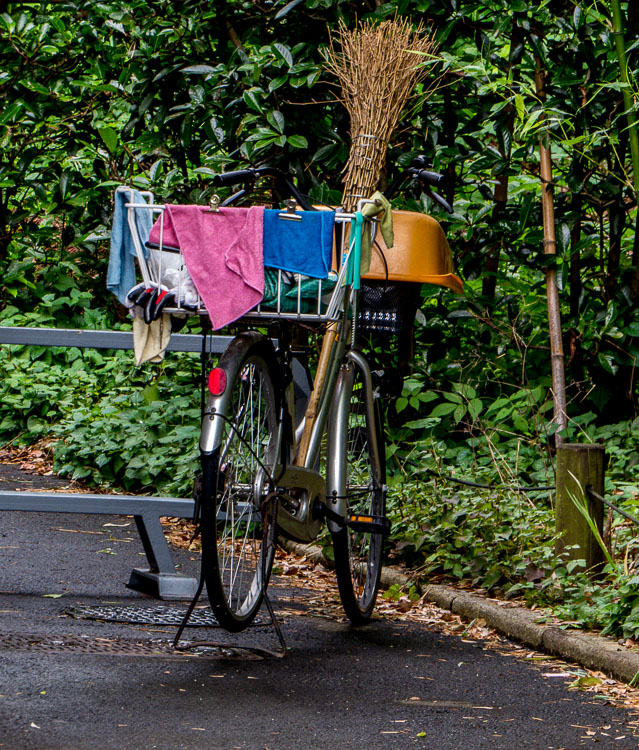 As we were leaving the garden grounds, I took a picture of the city area of Tokyo in which the Imperial Palace is located and which shows part of the moat that served to protect the Edo Castle. 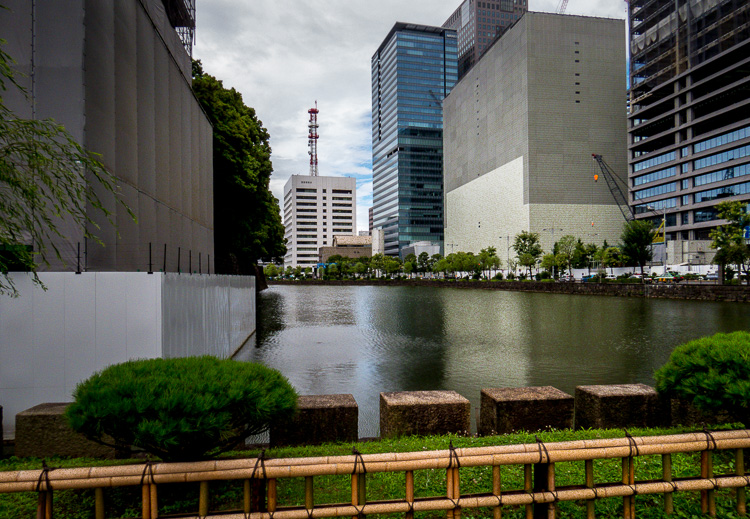