Trey Ratcliff, proponent of HDR photography and photographic pioneer has produced yet another beautiful and stunning piece of art. This time, however it is a video.

These moving pictures have a mystic and often ethereal quality to them because of the choice of music juxtaposed with the words of Alan Watts. You can’t help but ponder the meaning of life, death and existence while watching and carefully listening.

I found myself replaying parts of the video so I could better understand the words.

NOTE – Some of the words are hard to understand in places, but the images are superb and inspirational. 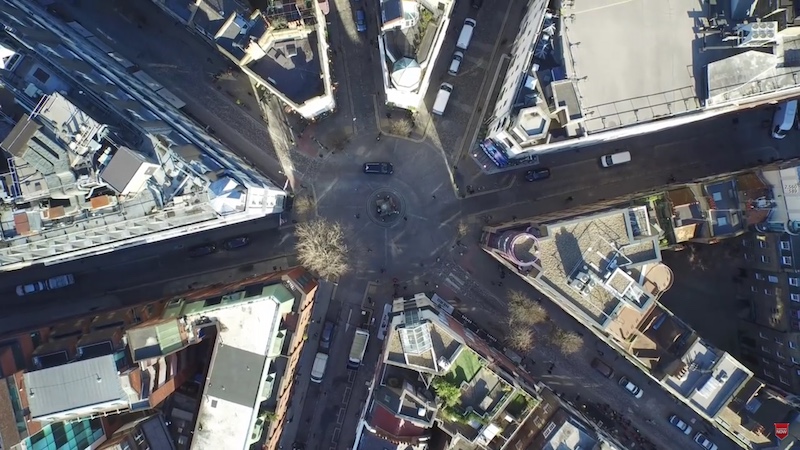 The picture above was a screen shot taken from Trey Ratcliff’s video below. It is of an area in London referred to as Seven Dials. Here is what Wikipedia reports about the area:

“Seven Dials is a small road junction in Covent Garden in the West End of London where seven streets converge. At the centre of the roughly circular space is a pillar bearing six sundials, a result of the pillar being commissioned before a late stage alteration of the plans from an original six roads.”

If you are interested in how Trey uses a drone to get some amazing pictures, the video below shows his team in action in London. Drones, of course, are not always popular and have gotten some negative press of late, but no one can deny the awesome views they enable. 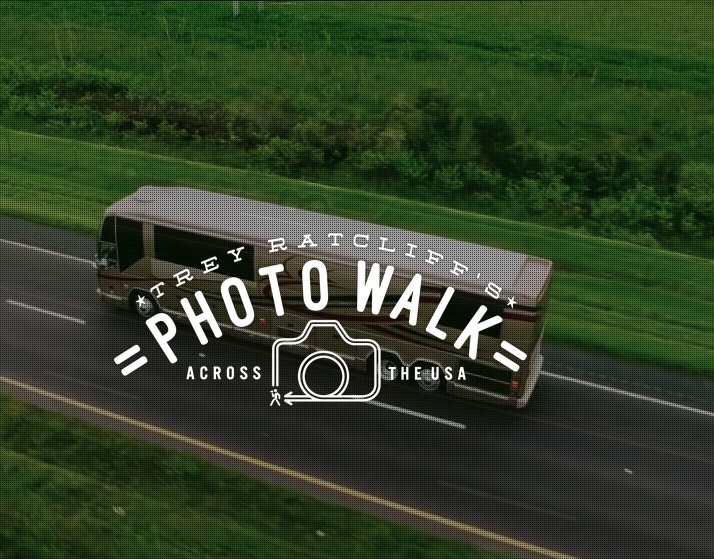 On this very hot day, it was a cool thing to do! Trey Ratcliff, known world wide as the father of modern High Dynamic Range photography, was going to be in my town, Phoenix, Arizona. His Photo Walk Across the USA had made it to the west.

Of course most people don’t come this way during the heat of August, but Trey is a trooper as is the rest of his crew. They were making their way through several major cities to publicize a number of things and to give fans a chance to do a photo walk with them.

The Phoenix photo walk began at the Irish Cultural Center. I never knew there was such an organization until I needed to find the location. As you can see, it is a beautiful building. 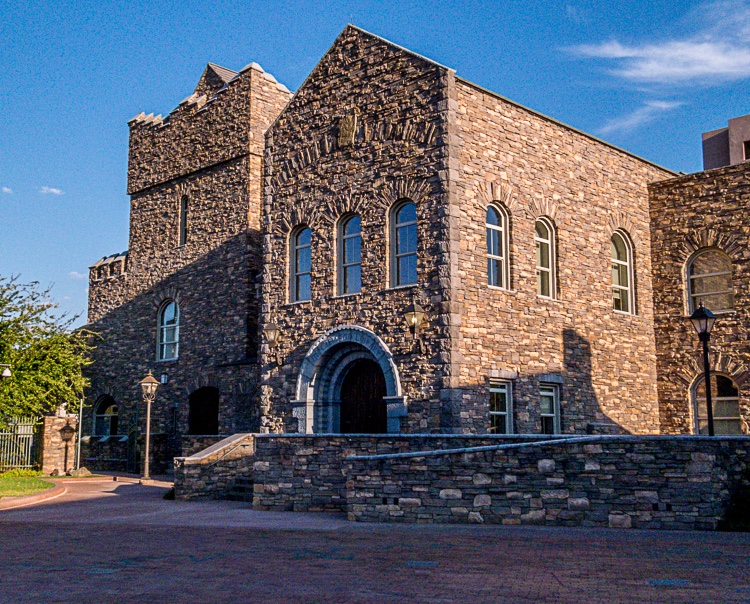 Trey likes to refer to his tour bus as a megabus and it was! 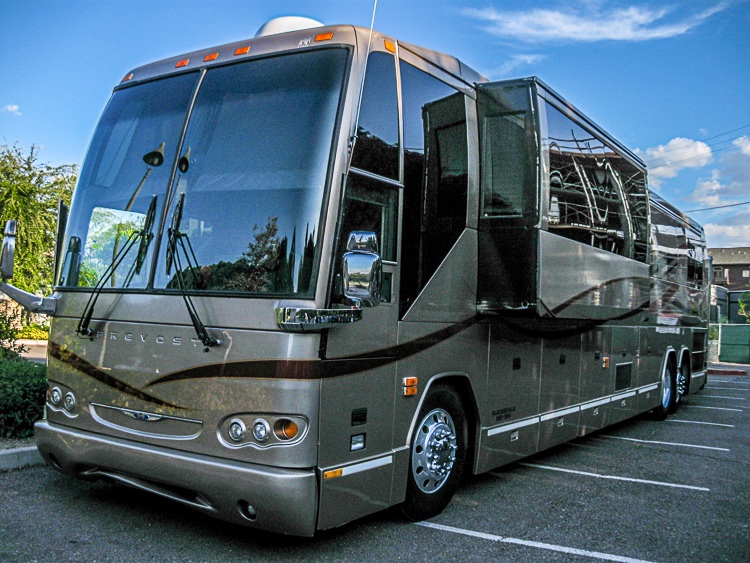 For someone who has earned quite a bit of celebrity, Trey is very approachable. You can imagine how uncomfortable it was in the heat of the desert in a paved parking lot, but he continued to meet and greet people and take photos with them for way more than an hour.

Here I am (wearing the light cap) with others talking to Trey. 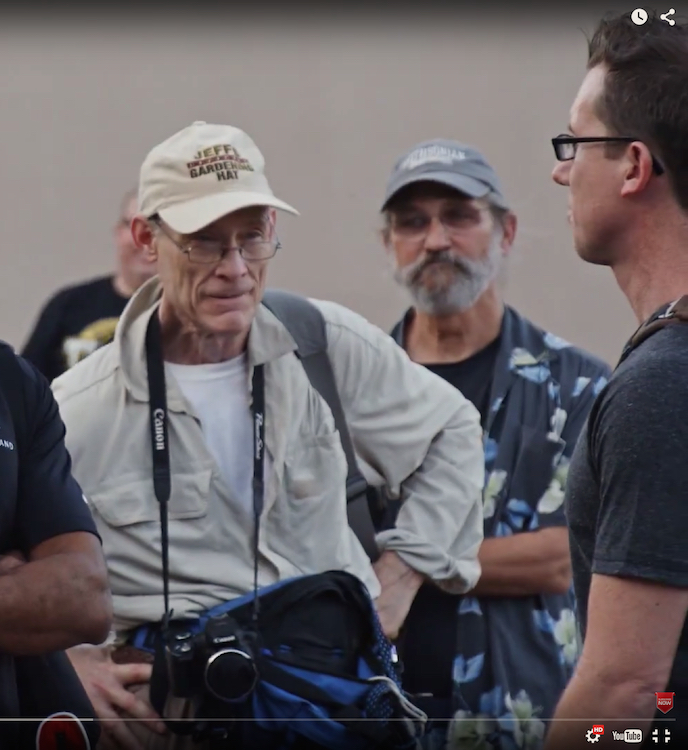 Picture Courtesy of a screen grab of Trey’s footage of the Walk – http://tour.treyratcliff.com/

My wife came along, but tended to stay in the background. She likes photography, but isn’t a picture taker. The yellow arrow points to wife Mary and the green arrow is me again (sorry). 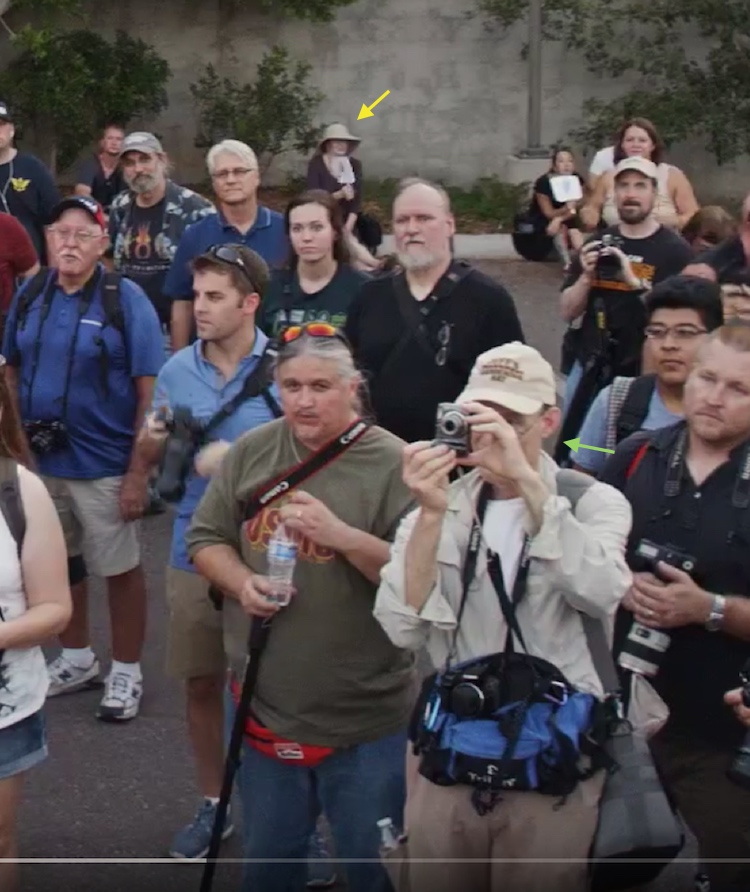 Picture Courtesy of a screen grab of Trey’s footage of the Walk – http://tour.treyratcliff.com/

I guess you can call Curtis Trey’s right hand man. He can be seen on videos and webinar type experiences offered through the Stuck In Customs website. He provided some helpful hints and guidelines prior to the walk. 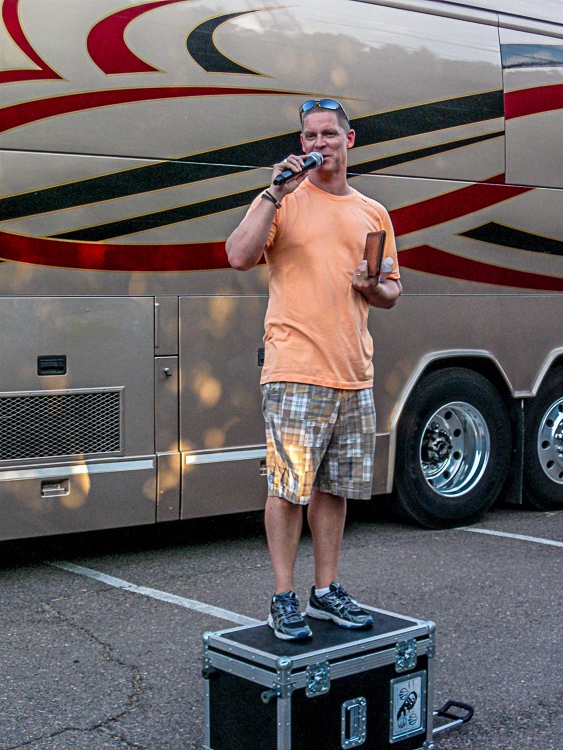 As time approached for the walking tour to begin, the crowd began to form. 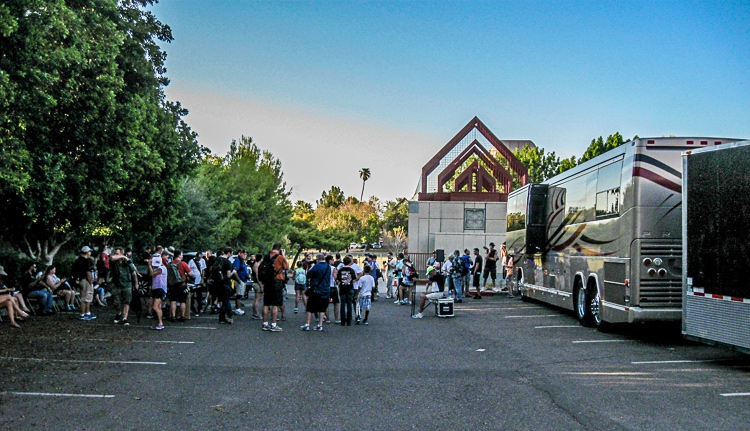 Trey was wearing some amazing Nikes 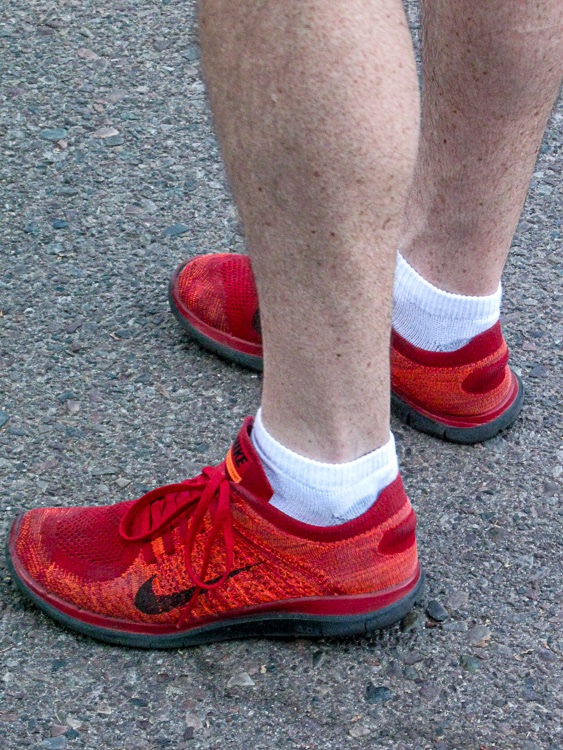 But he wasn’t the only one! 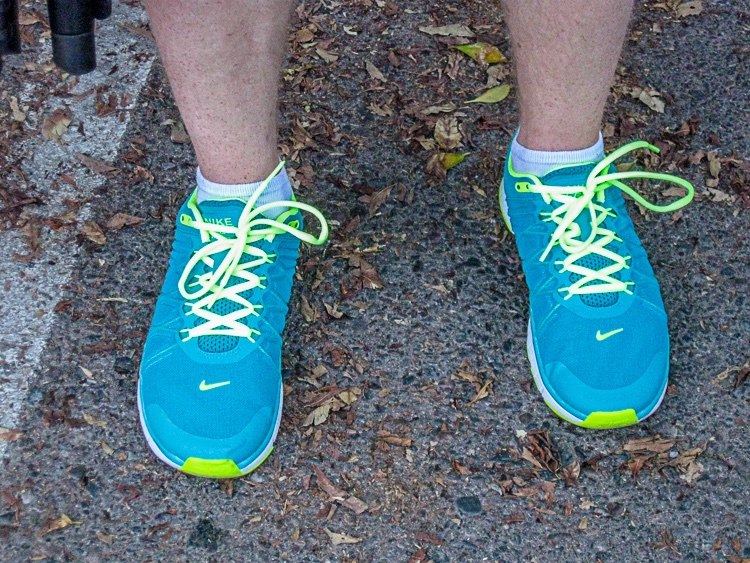 A note needed here – I don’t own a camera that is able to take quality pictures in low light. The best I could do was with my trusty iPad and my Canon PowerShot A590. So…many of the shots that remain will be grainy, but I think they still offer a good “feel” for how the night unfolded.

As we began to walk around downtown and without knowing where the tour would lead, the sun began to set. One of the first photo opportunities was a church that was barely lit, but had a nice courtyard. 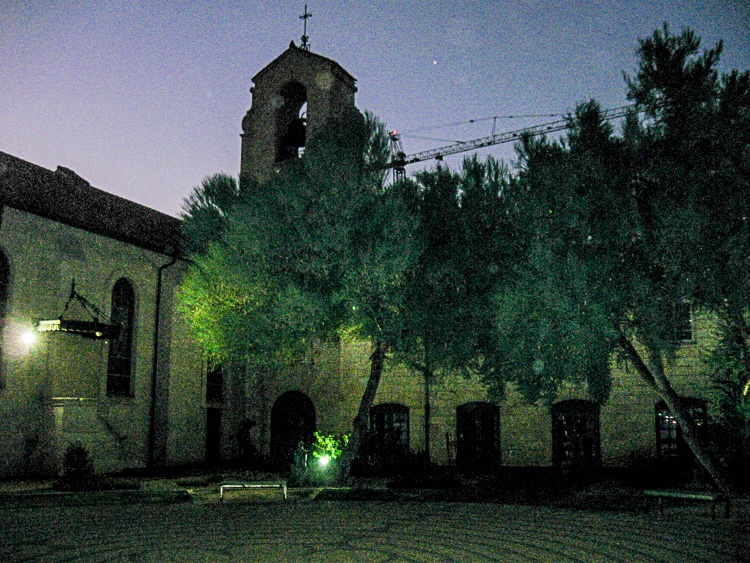 Trey was using the new Sony a7R Mark II which has great low light abilities as well as being at the top if its class and, according to the initial reviews, surpasses many of those in other classes as well. Do you detect camera envy?!

After another brisk walk, we stopped at this street corner. Trey explained that he liked the mix of the mural on the wall and the building lights. 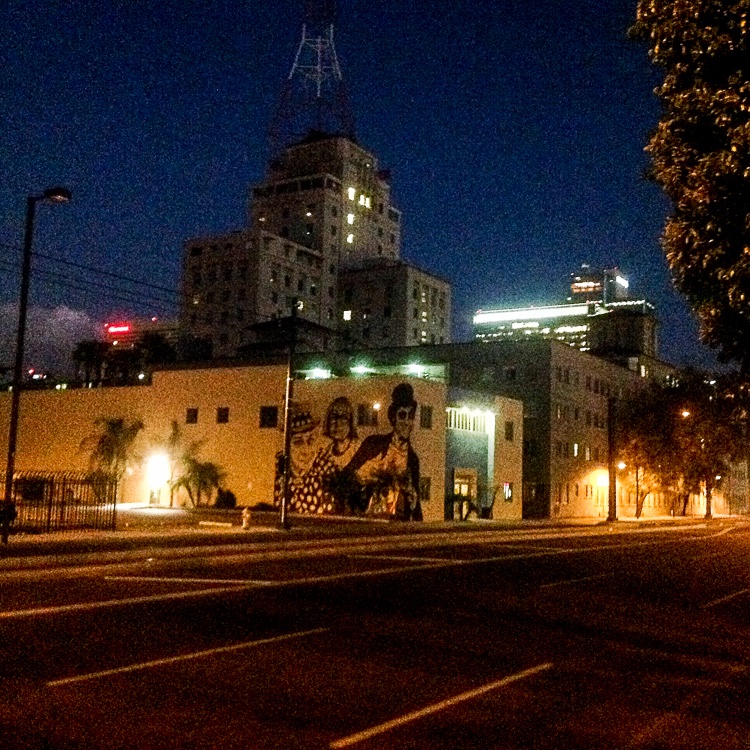 One of the best things about the photo walk was that the participants could ask questions which TR was glad to answer. He discussed the composition and the details indicating why he thought each shot would make a good picture.

Trey wasn’t taking single shots either. He was taking HDR photos which call for a series of three exposures; one properly exposed, one two stops over and the other two stops under. These are later combined to yield the HDR picture bringing a high dynamic range to the photo with details in shadow areas as well as those that are strongly lit. 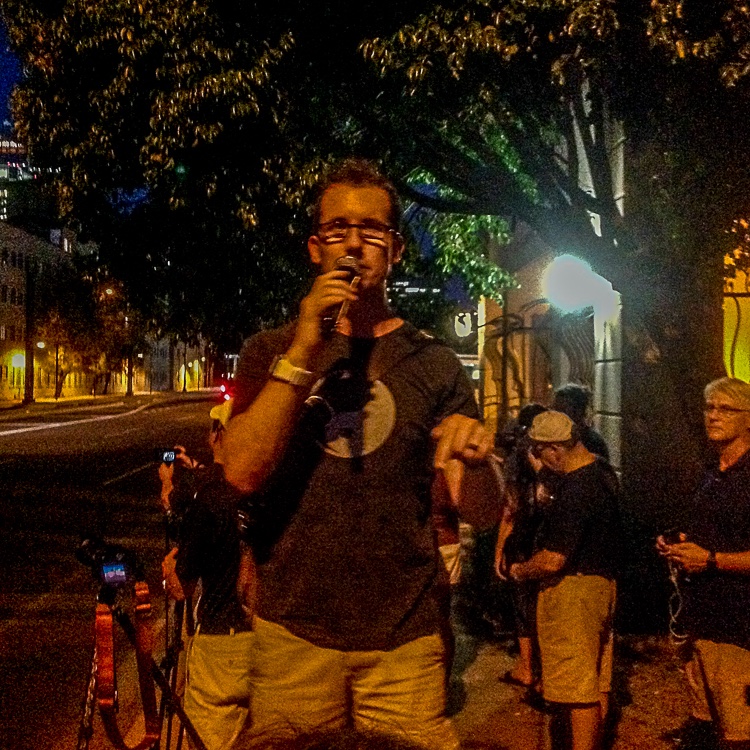 As the traffic light was changing, other photogs were asking questions; a walk and talk kind of experience.

There was another picture opportunity at a concert in the park where this modern structure made of optical cable or wire was being illuminated by changing lights. (I will provide a link to better pictures at the end of this post) so you can appreciate the full effect. 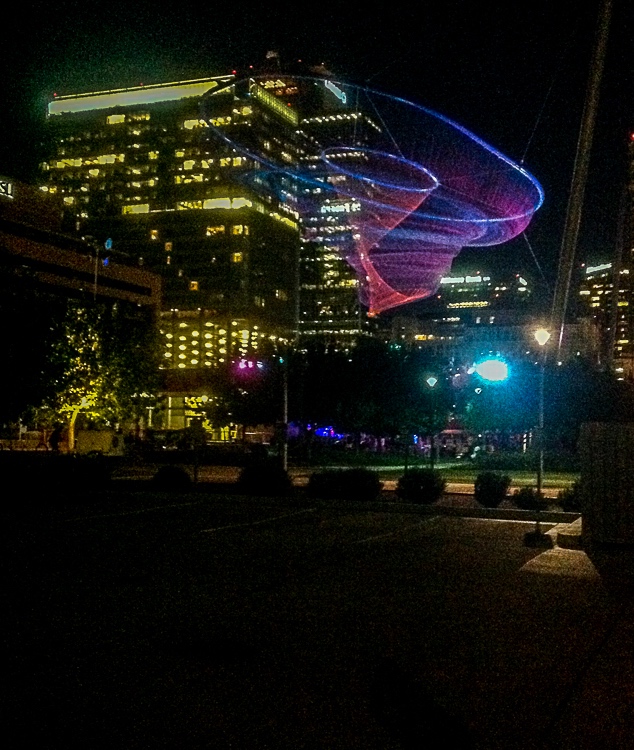 At this stop (below) trey provided another “Mind Vitamin” (something to think about) as he pointed out how converging lines help give depth to a picture and offer the viewer somewhat more than a two dimensional experience.

He stated that he loved the green trees, i.e.Palo Verdes. 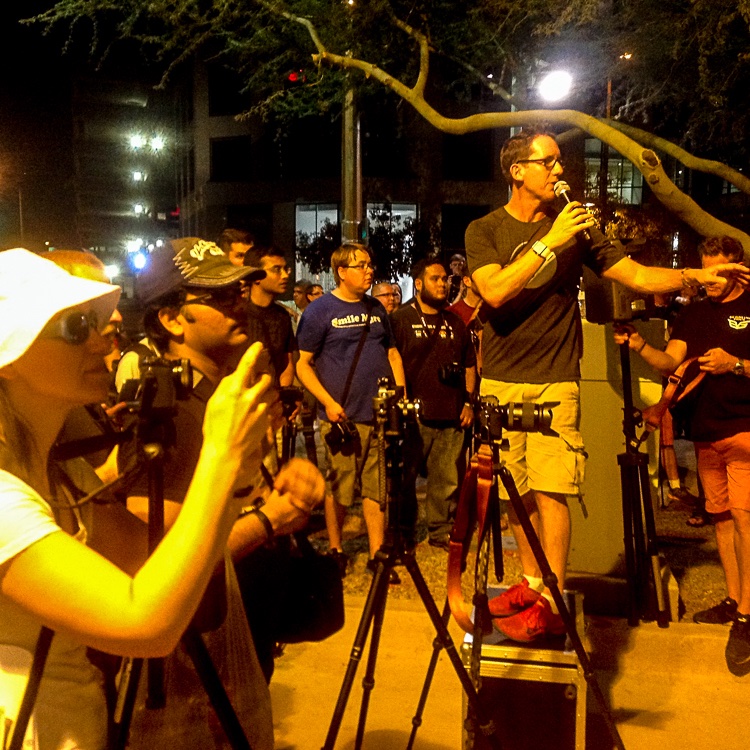 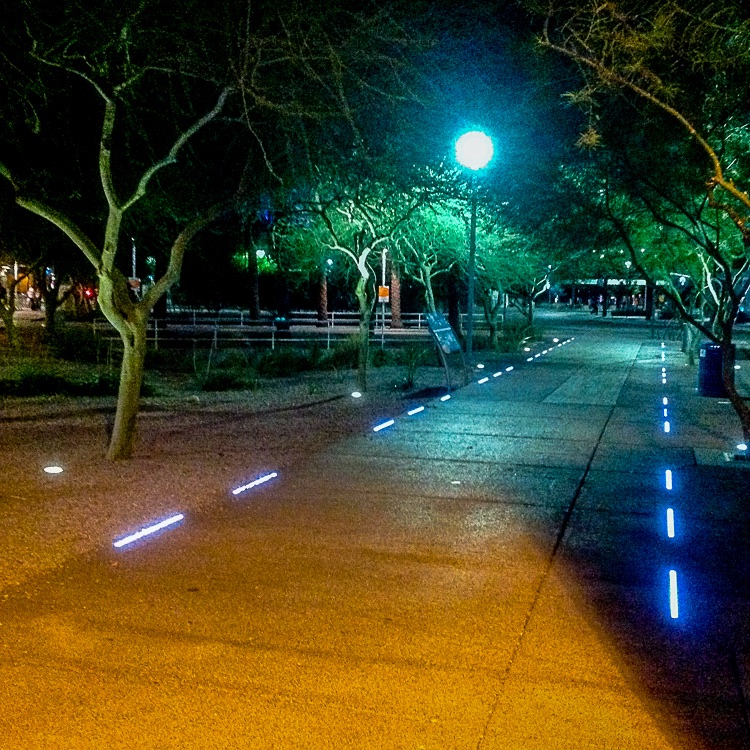 Others took the opportunity look at his camera (as he had it set up to take the pictures on a time delay) so they could examine the settings, etc. 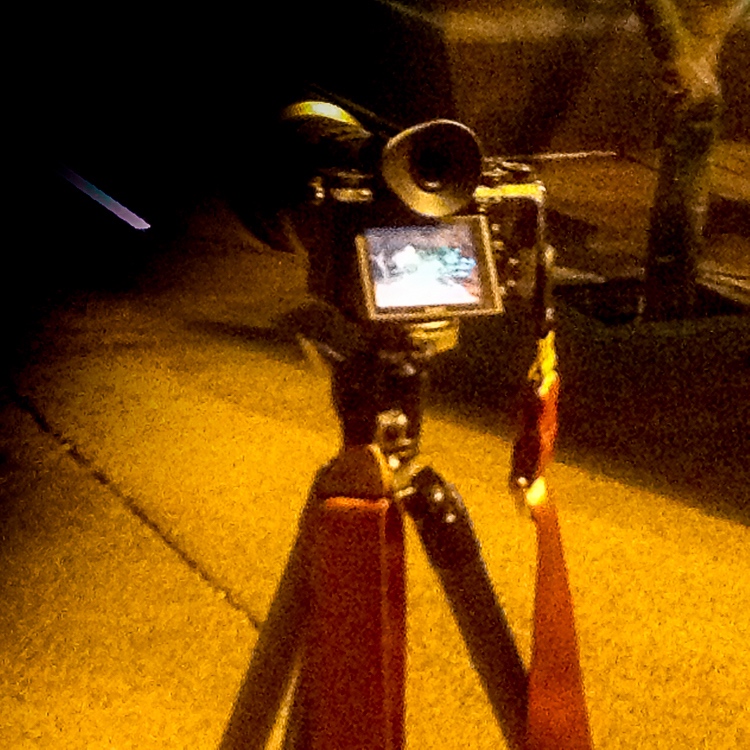 One of the AV crew members was wearing this shirt which I thought had a slightly ironic twist. 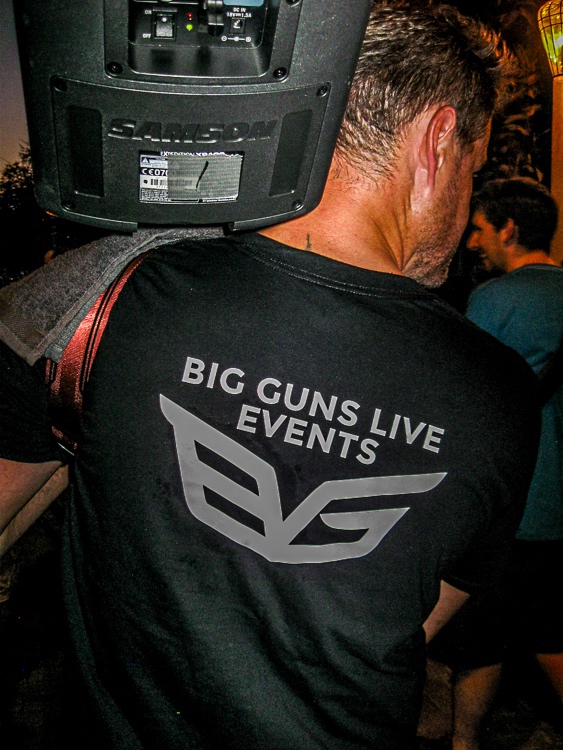 Trey was toting his “ultimate camera bag” that he and Peak Design worked on together. At least his gear was on the light side. 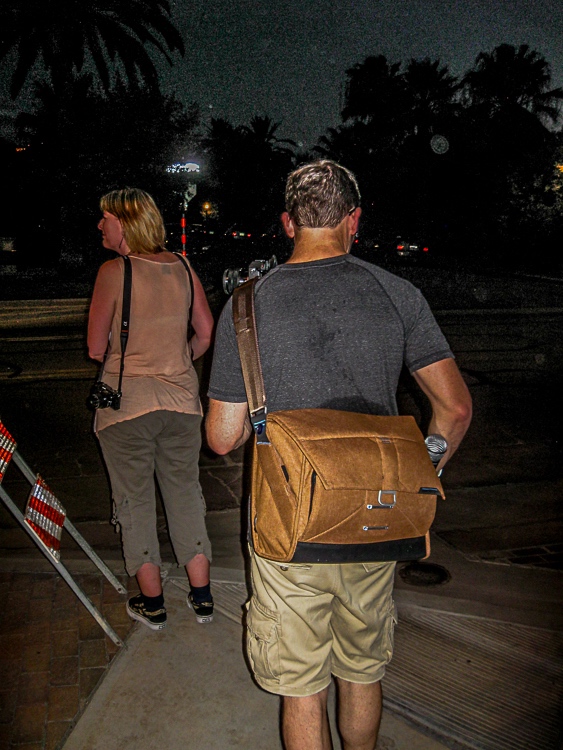 Trey selected this shot because of the pattern of light and dark and the reflections. This picture doesn’t do it justice, but I think you get the idea. 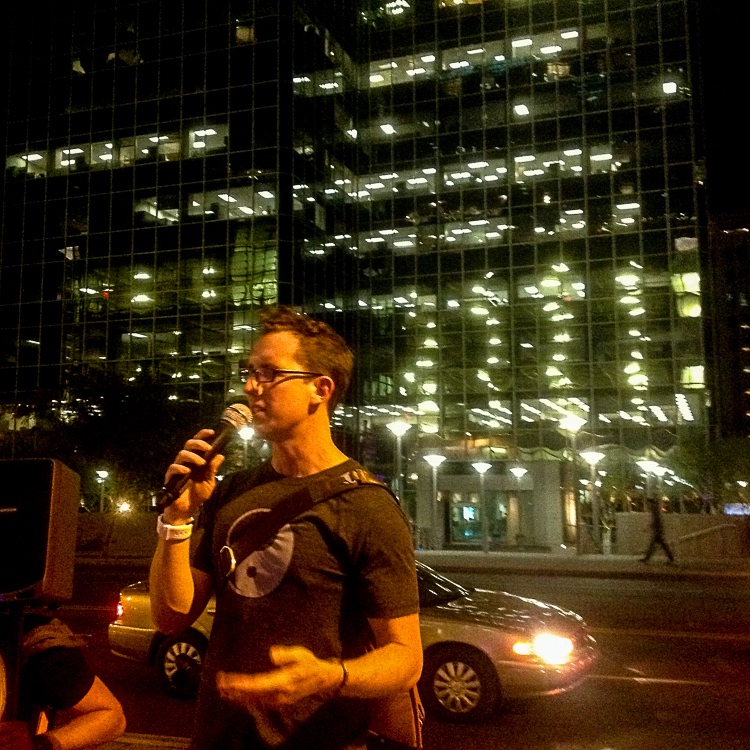 Once again, Trey stopped to discuss scenes that cried out to be photographed. 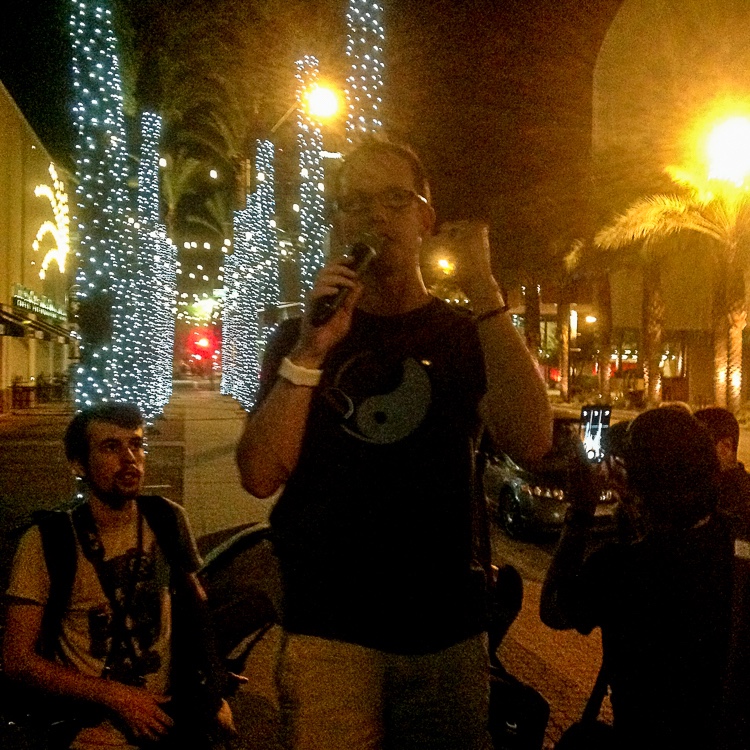 Another example of converging lines drawing the eye into the picture. 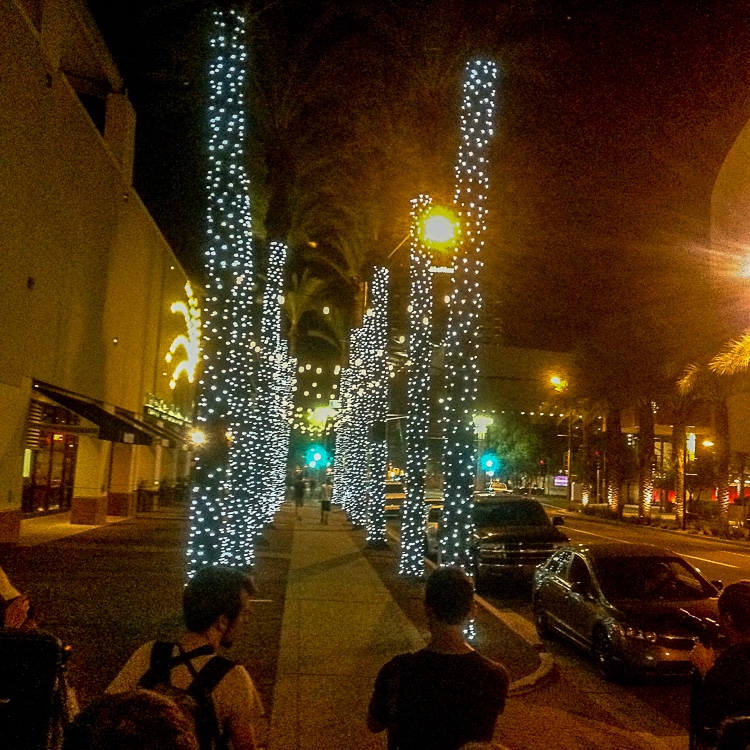 This was one of the last stops of the tour before the after party so we headed back to the car since we had a long ride home.

On the way back to the car (a nearly two mile trek) through downtown Phoenix, we came across this scene. I know it is just a water fountain, but it struck a responsive chord with me especially after reading the sign (The Little Fountain That Could). 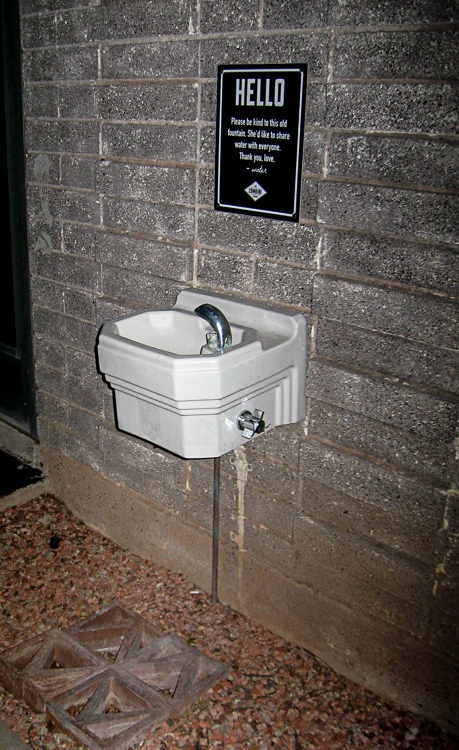 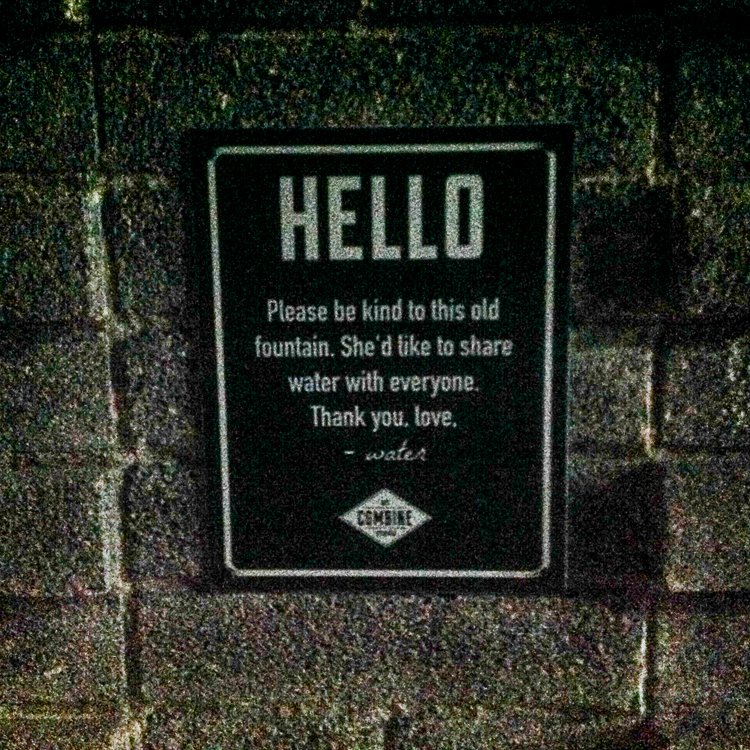 To see the best pictures of the Phoenix photo walk, go to the Google+ page Best of: Trey’s Phoenix Photo Walk

You can watch the Phoenix Photo Walk Video:

If you want to learn more about HDR photography and the story behind Trey Ratcliff’s photography experience, you can check my former blog post,Founding Father of HDR Photography – Trey Ratcliff, which includes a link to Trey’s inspirational TED talk!

High Dynamic Range (HDR) photography often divides the photography community. A number of people dislike it and some do so passionately. Others love it and use it to its extreme and do so passionately. Then there are the moderates, like me, who use it in a realistic fashion to bring out the shadow details and to tone down the highlights.

Perhaps the greatest proponent of HDR photography and some might say the “founding father” of the technique, is Trey Ratcliff. I have been following Trey’s blog for years and I admire much of his work.

If you are interested in photography in general and HDR photography in particular, I know this TEDX talk by Trey Ratcliff will be of interest. He has a powerful, unique and often poignant story to tell. ALSO…watch the background as he uses many of his HDR photos to keep the audience’s attention.

“Many people may have artistic heroes. Trey, as a master of imagery is the creator of so many visuals that burn into our mind and particularly arrest our own notion of what is real. Trey meanders with us through important moments in his life, beginning with some difficulty and then realising in hindsight that sometimes you must ‘stumbl(e) into your own greatness’.”

Like many photo enthusiasts, I use Adobe’s Lightroom and the BUZZ this week has been about the new version.

One of the most highly touted upgrades was the addition of a High Dynamic Range (HDR) merge and adjustment component. I watched one of the webcasts from Kelby One and when I saw the results of one of the HDR-processed photos, I said huh?

Kelbyone, one of the premier training resources for photographers and photo enthusiasts, had several webinar-type broadcasts about the new version.

NOTE: I have nothing but praise for Kelbyone. They offer many free resources to help budding and seasoned photographers. They produce a free Lightroom show every Friday which I am always anxious to watch so I can gather a deeper understanding of Lightroom and learn new techniques/options. So this is in no way a comment on their reportage of the new upgrade to Lightroom. They call the shots as they see them.

After they demonstrated the new HDR component to process an HDR image, I didn’t think it was anything like a traditional HDR photo. I thought that I was just not experienced enough with HDR and I wasn’t appreciating how good it was. After all, over the Internet, it is really hard to get the best view. I figured if Scott Kelby and R.C. were satisfied, it must be good.

Well…several days later, it appears that the Emperor May Have No Clothes. Trey Ratcliff, the father of the modern HDR movement as far as many are concerned, has chimed in and seems to have the same feelings I had.

Read his comments about the new upgrade here:Lightroom 6 and HDR?

What are your impressions of the new version of Lightoom?