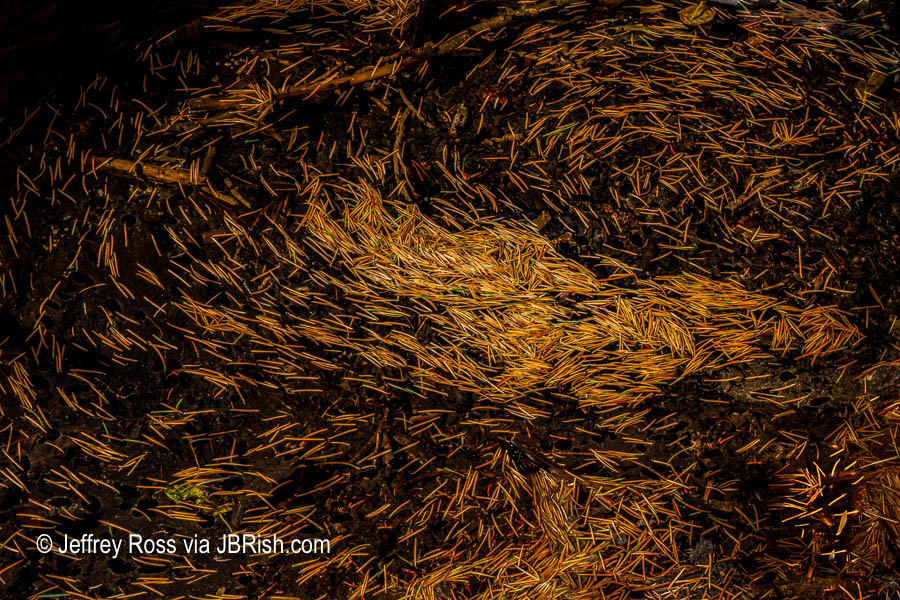 After hiking for more than a week in Yellowstone National Park, we moved on to Red Lodge, Montana to continue our adventure. We decided to explore a course along the Silver Run Plateau, Trail #102, Loop #3 just outside of town.

The first part of the loop was quite rocky with boulders and large rocks buried in and around the path. The return half of the hike, however brought us nearer to the river which had much better footing and more intersting views. Along the way, we passed a feeder stream that had a very slow, but consistent flow. A large number of pine needles were “caught” in a side channel and they were swirling around in a somewhat circular motion as the water worked its way around some rocks and debris.

The pattern was very appealing and I found that watching the movement was similar to playing with a kaleidoscope.

The southwest is truly a spectacular part of the United States. That is not to say other states, sections, etc. do not have beauiful areas as well, but the southwest has been blessed with an abundance natural wonders.

Utah, for example, has their Mighty Five:

I am glad to report that we have been to all of the above and we yearn to return to several of them to see more of what they have to offer. We hiked Zion two times and want to return at least once more. For those who love nature, hiking, etc. it is hard to overestimate the amount of wonder that can be found in all of the parks listed above.

As a side trip to visiting Arches National Park, we took a day to go to Canyonlands National Park’s Needles District. The day was stormy with periods of rain, but as long as it is safe, we hike rain or shine.

One site we saw was the Wooden Shoe Arch. I only had my 8 MP Canon point-and-shoot, but as they say: “The best camera is the one you have with you.” I took the picture below and I think it captures the beauty of the area. 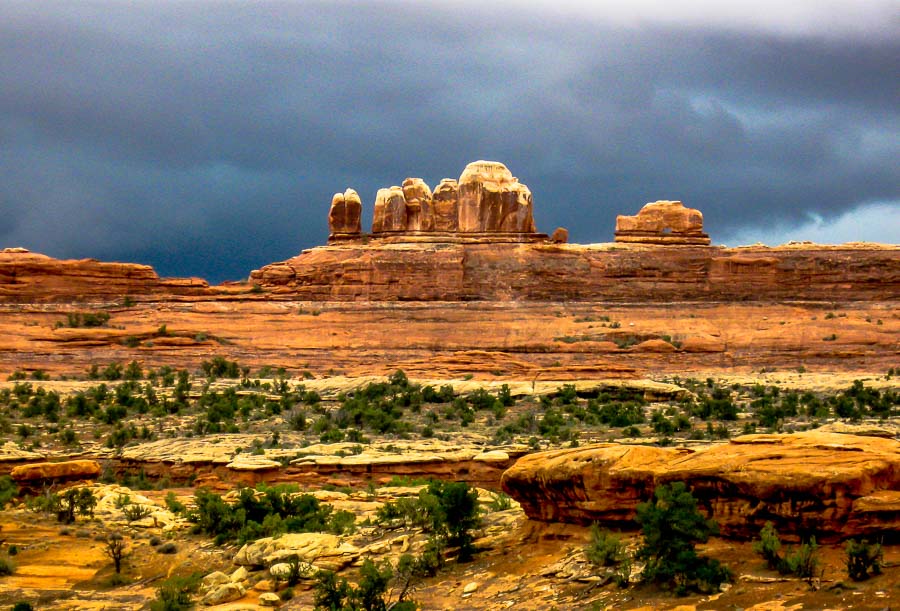 You may have to look carefully to see the “shoe.” It is the formation in the distance on the right. The heel and front of the shoe are separated by a space. The cloudy day makes it hard to discern so I put an arrow above the shoe in the picture below. 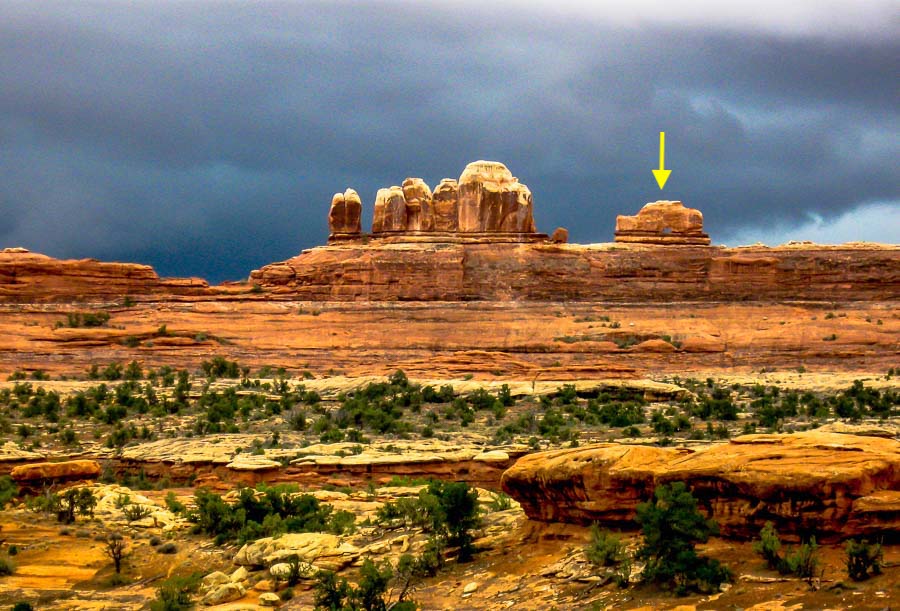 We have had a wetter than usual winter and early spring and thus we are having a beautiful wildflower bloom. Our landscape cactus are showing their appreciation as well with a living bouquet for our enjoyment.

One of our courtyard features is a round planter that has hosted a Claret Cup cactus (Echinocereus triglochidiatus) for more than ten years. At one time it had plenty of room, but as you can see below, it will need to be divided and replanted within a year or so. 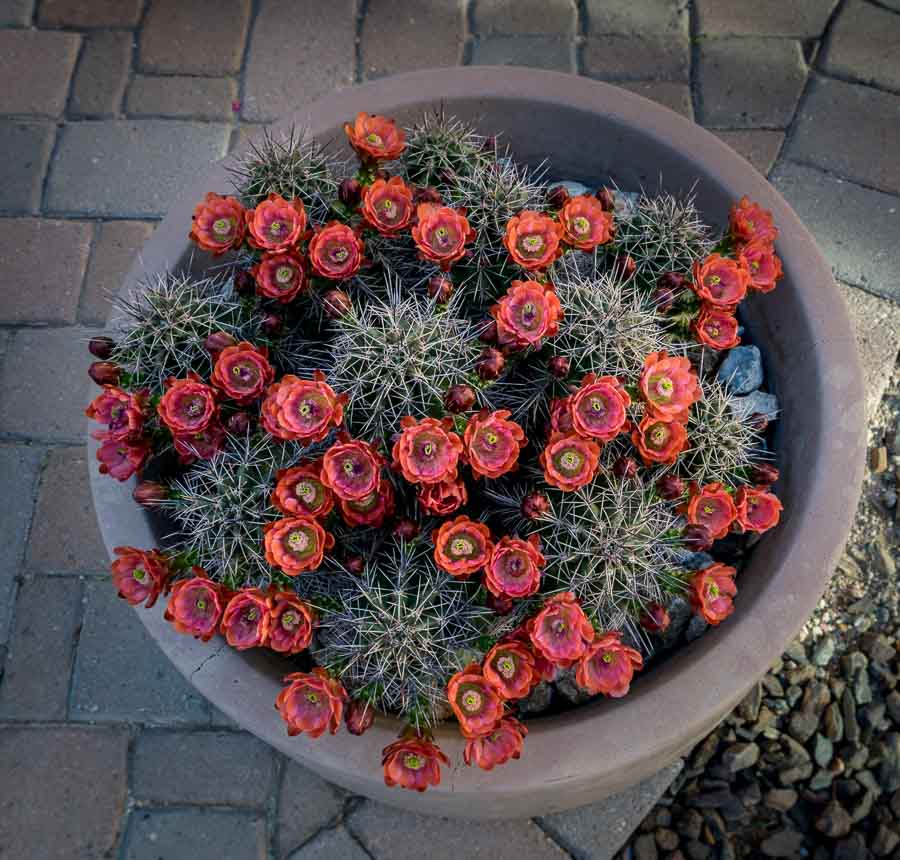 In years past, it wouldn’t have this many blooms open at once, but its stinginess vanished this year and we are being treated to a full orchestration of its floral beauty.

Upon closer inspection you can see the juggernaut of thorns it sports that will present quite a challenge when it comes time to move or transplant it. We have a long pair of tweezers or tongs that we use to remove spent blooms or any debris that gets caught amid the needles. 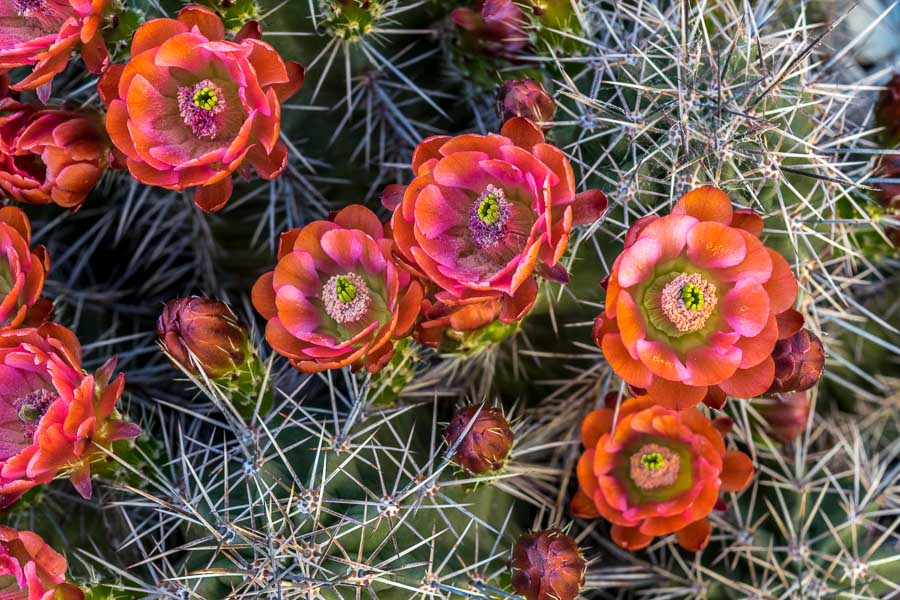 In the photo below, the pollen can be seen on top of the stamens. While this adds color to the picture and pollen to the air, it also seems to attract woodpeckers. For some reason they like to eat the center of the flowers and my assumption is that it is because of the pollen. After inspecting where they have been, the pollen sacks are gone — who knew? 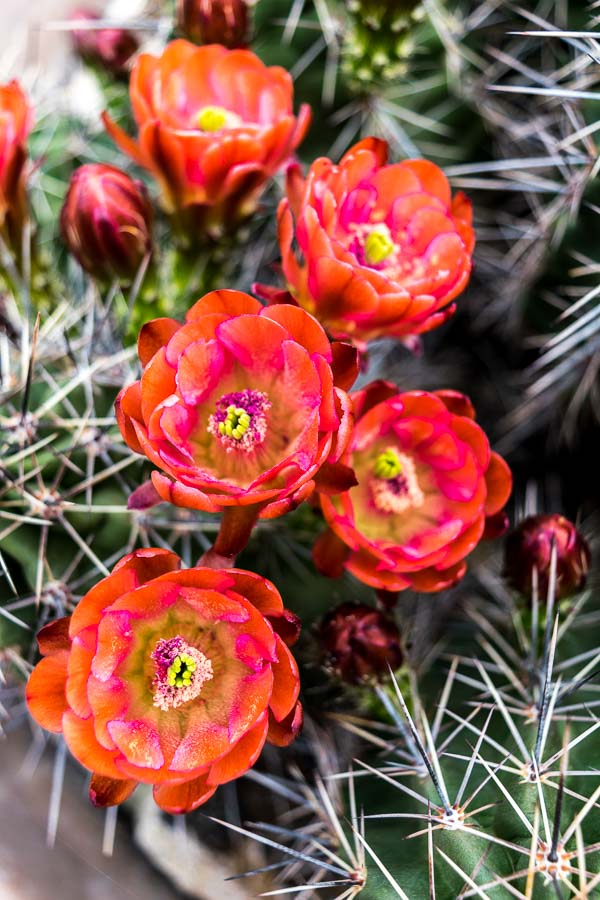 You can read more about Claret Cup cactus (Echinocereus triglochidiatus) by clicking HERE.

JBRish.com originally published this post
All photographs are Copyright by Jeffrey B. Ross with ALL Rights Reserved

Pine Tree Trail has been (rightfully) purported to be one of the premier hikes in the Organ Mountains-Desert Peaks National Monument (OMDP) in Las Cruces, New Mexico

Loop hikes are of a special appeal; and a trail that provides an opportunity to experience new terrain with each step coupled with significant canopy is especially attractive. The trailhead starts at the Aguirre Springs Campground and the hike is fairly well marked. 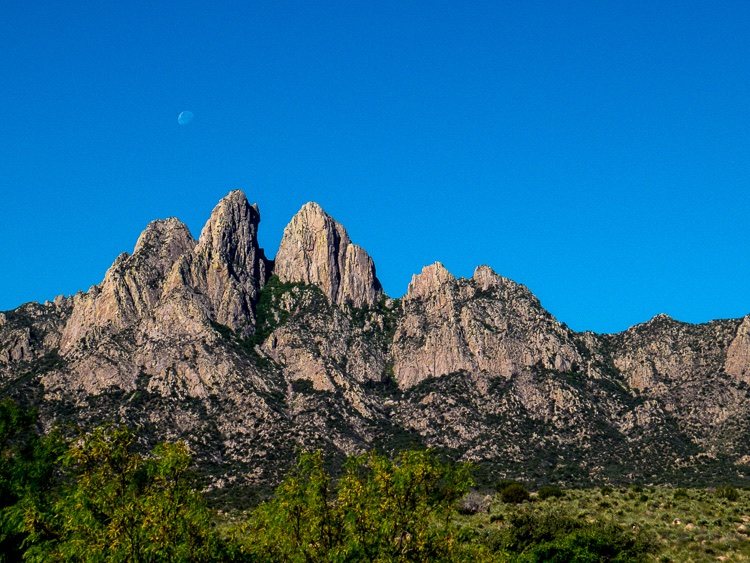 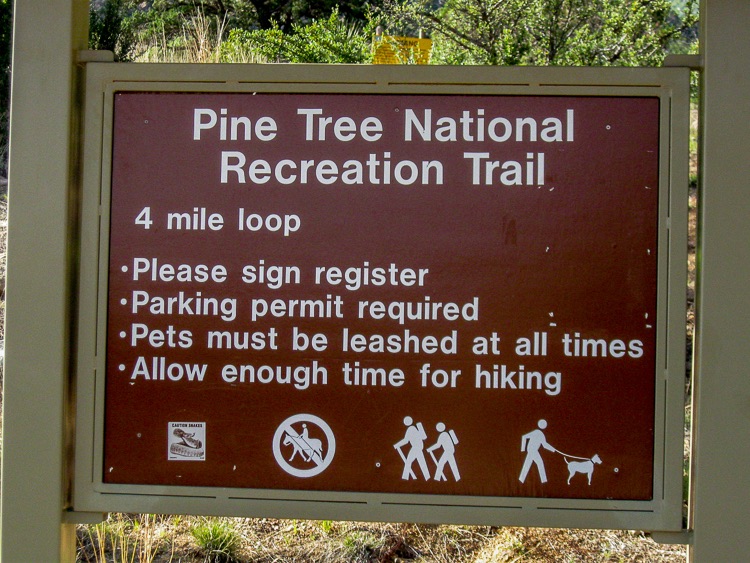 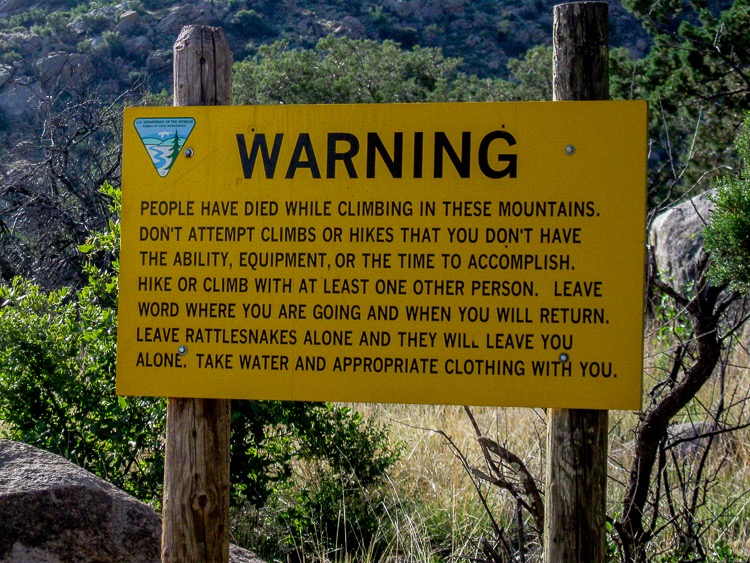 The trail gained 1000 feet in elevation via gradual switchbacks around the edge of a depression created by Anvil and Sotol Creeks. 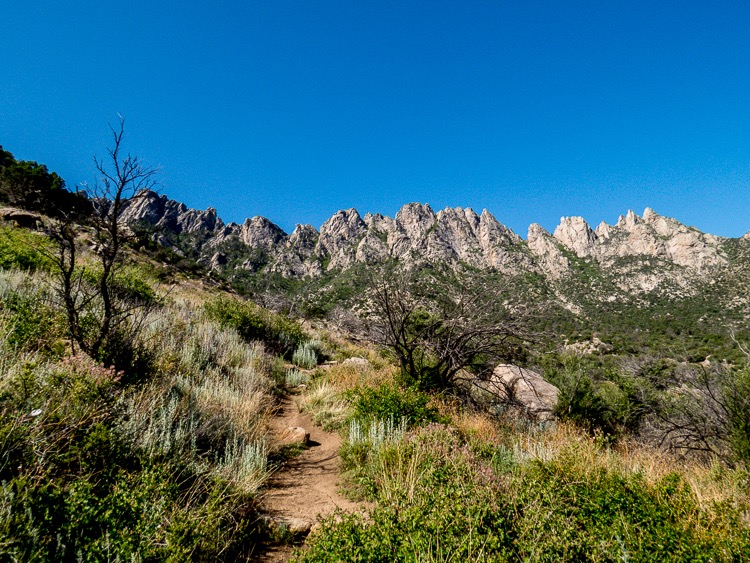 The trail upward traversed lush vegetation, occasional rocky (dry) riverbeds, with some melt-off (in early May) noted seeping through some rocks. Varied wild flowers (Apache Plume and Blanket Flower (Gaillardia)) and ferns are evident on the trail. 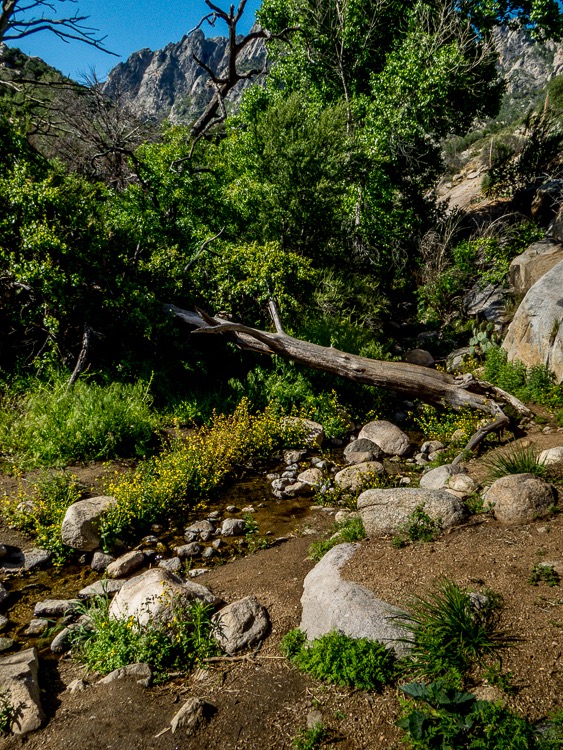 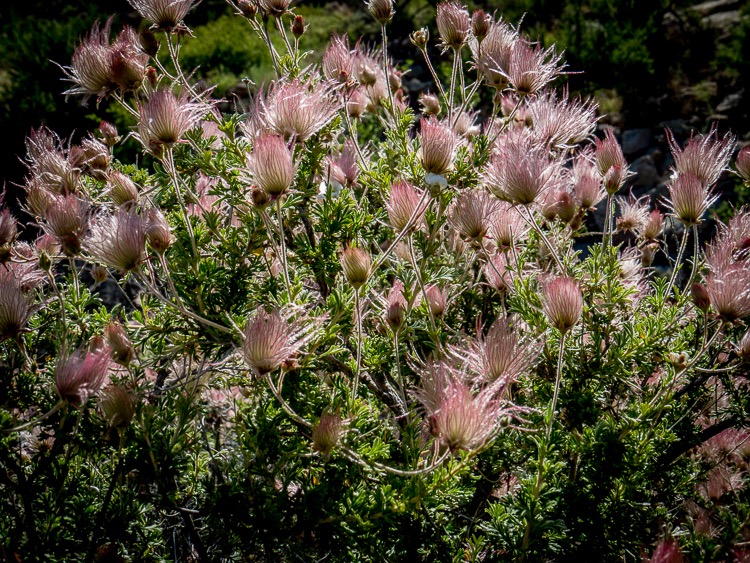 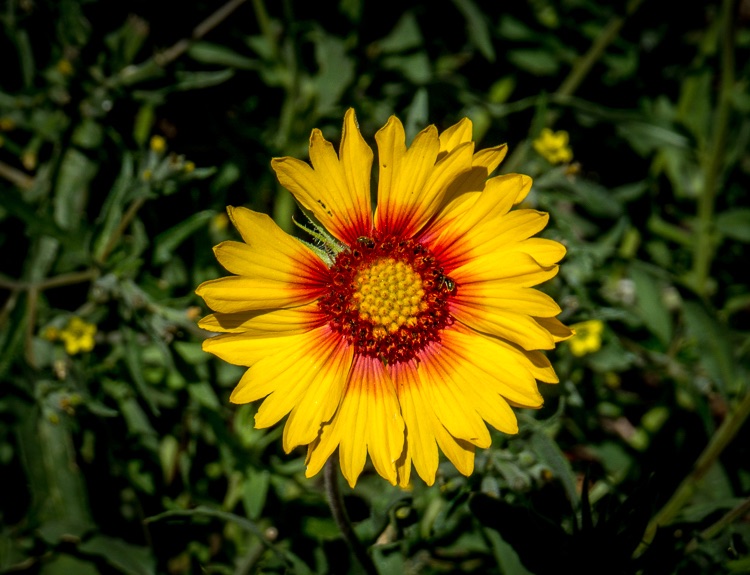 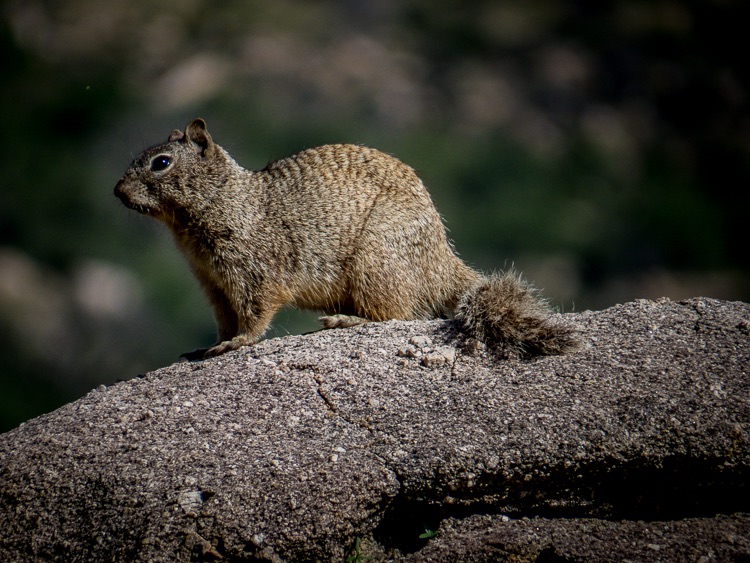 Boulders along the path required some occasional negotiation. 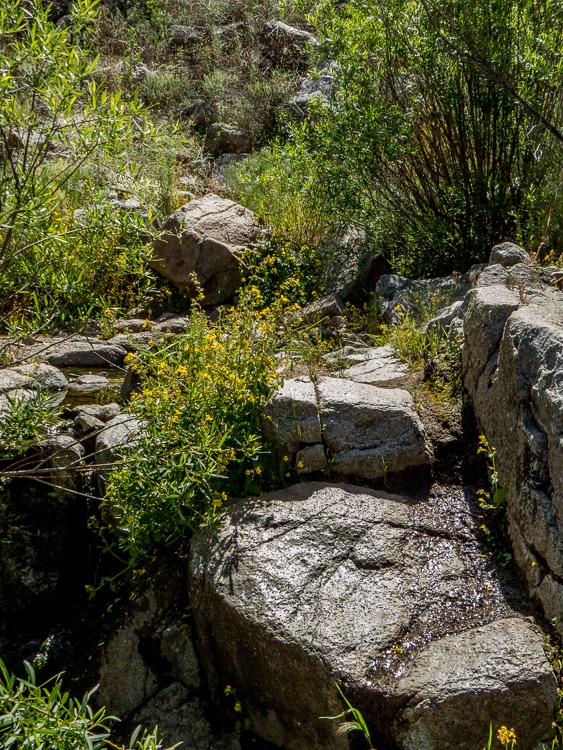 The hollowed base of a dead tree conjured imagines of forest trolls!! 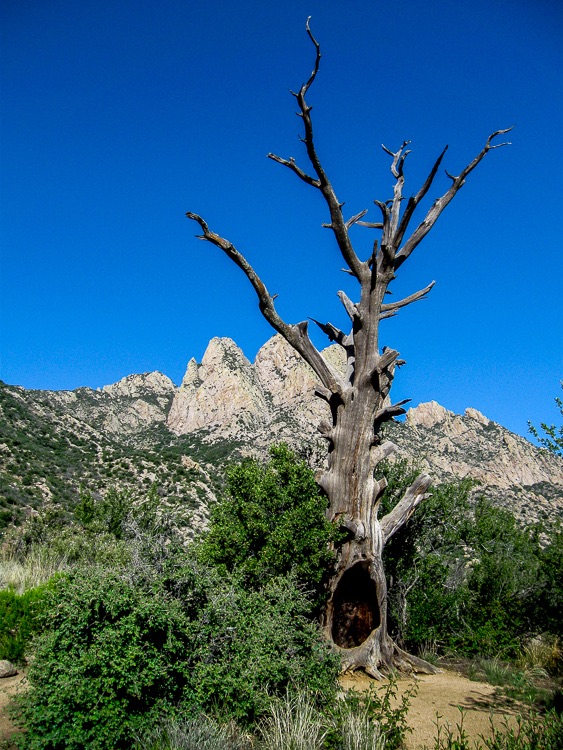 The treeless expanse of Sugarloaf to the south was occasionally visible. 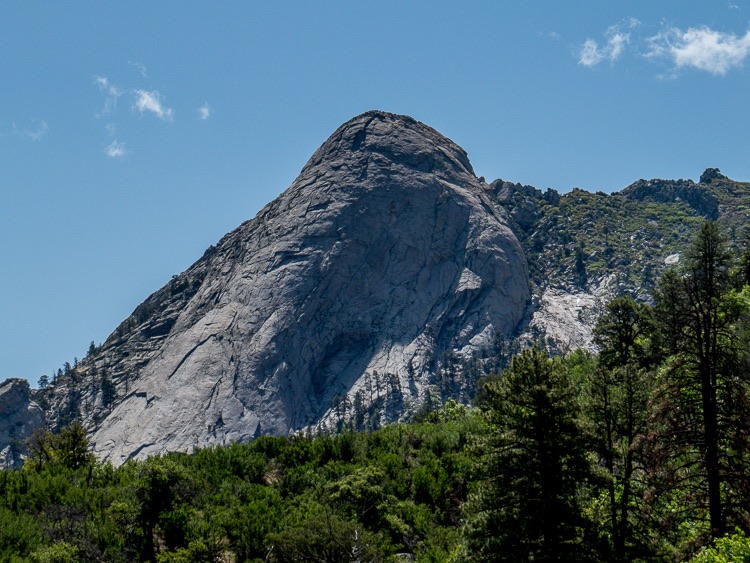 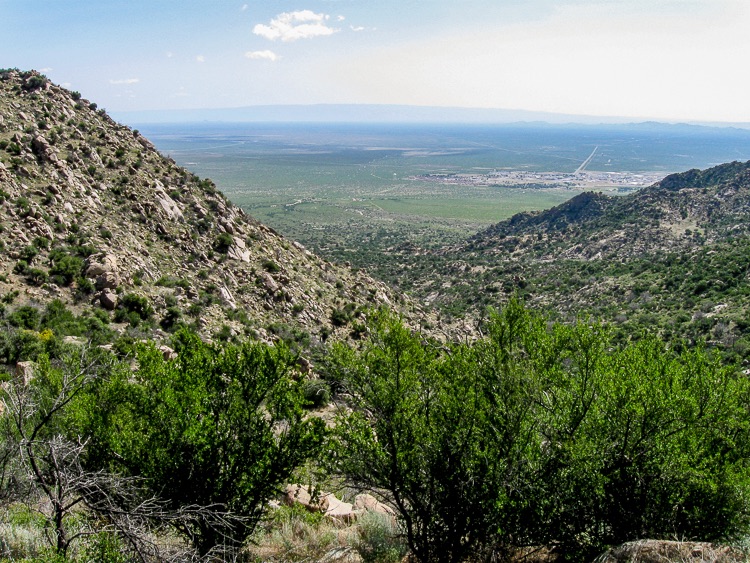 A primitive camp located at the top of the trail offered comfortable seating (note horizontal log!). Signage provided the reassurance that the hike was halfway complete! 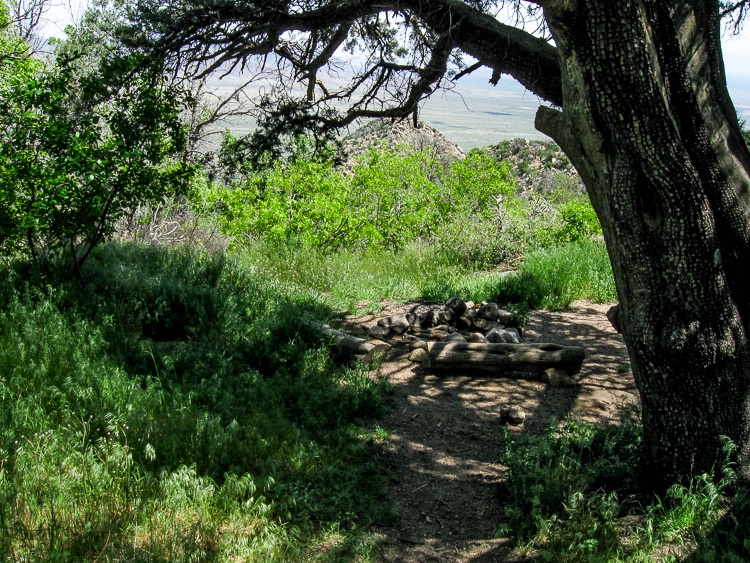 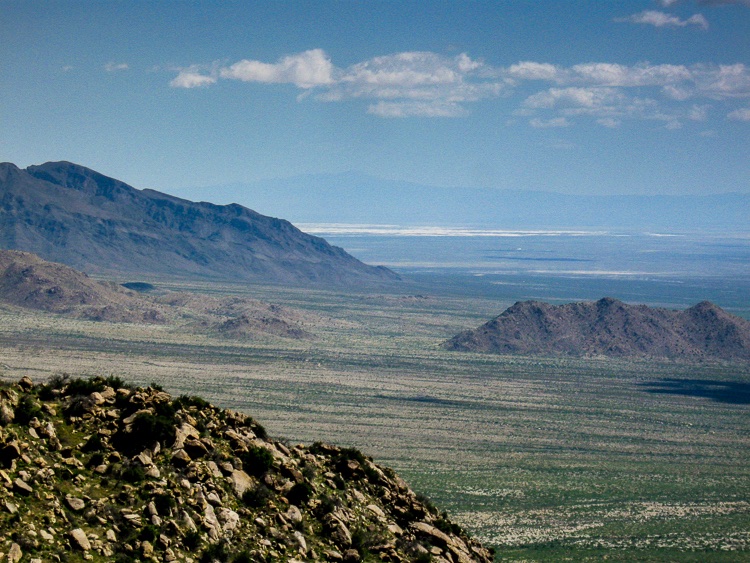 Completing the second half of the hike in a fraction of the time of the ascent, Pine Tree Trail definitely warranted favored hike status in the OMDP!! 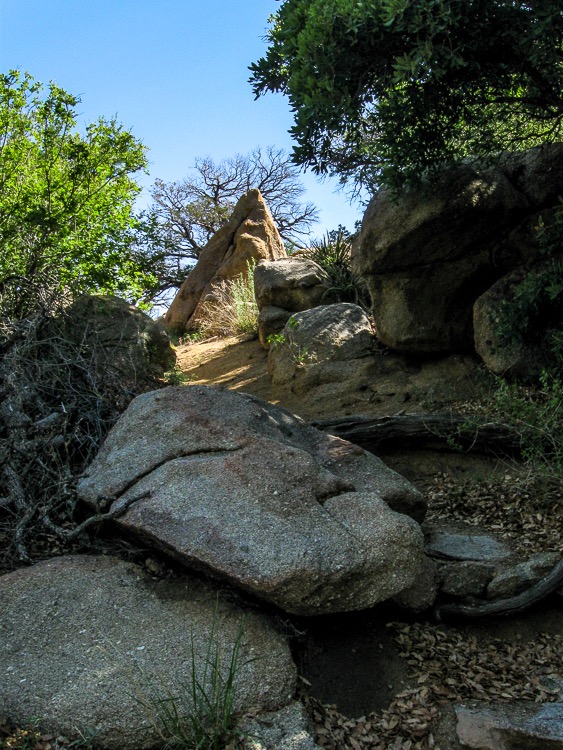