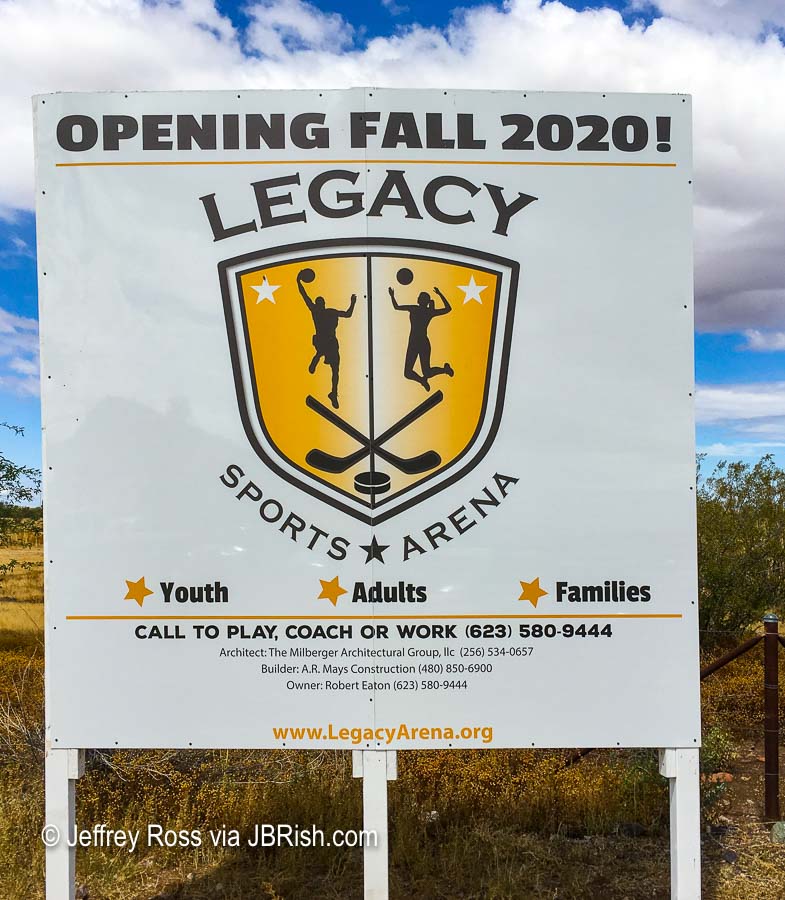 New ground has recently been broken in North Phoenix, both figuratively and literally. Just a short distance from the intersection of I-17 and Route 303, construction of the Legacy Sports Arena has begun as part of the Gateway Community. 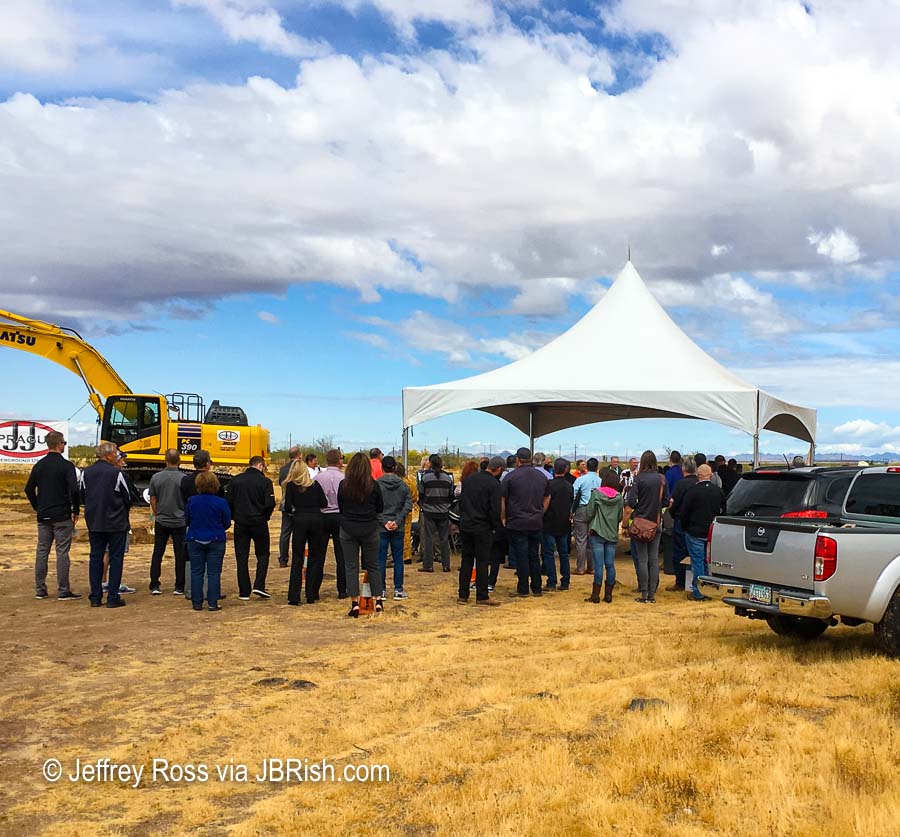 Cave Creek resident Robert Eaton and his team are working hard to complete an ambitious and profoundly different sports facility with an anticipated opening scheduled for the Fall of 2020. The plans call for two NHL-sized hockey rinks with the latest LED technology employed via glass flooring that can provide lighted boundary lines for basketball courts, dodgeball, soccer, lacrosse and for the fastest growing sport in the United States and Canada…a dozen pickleball courts! 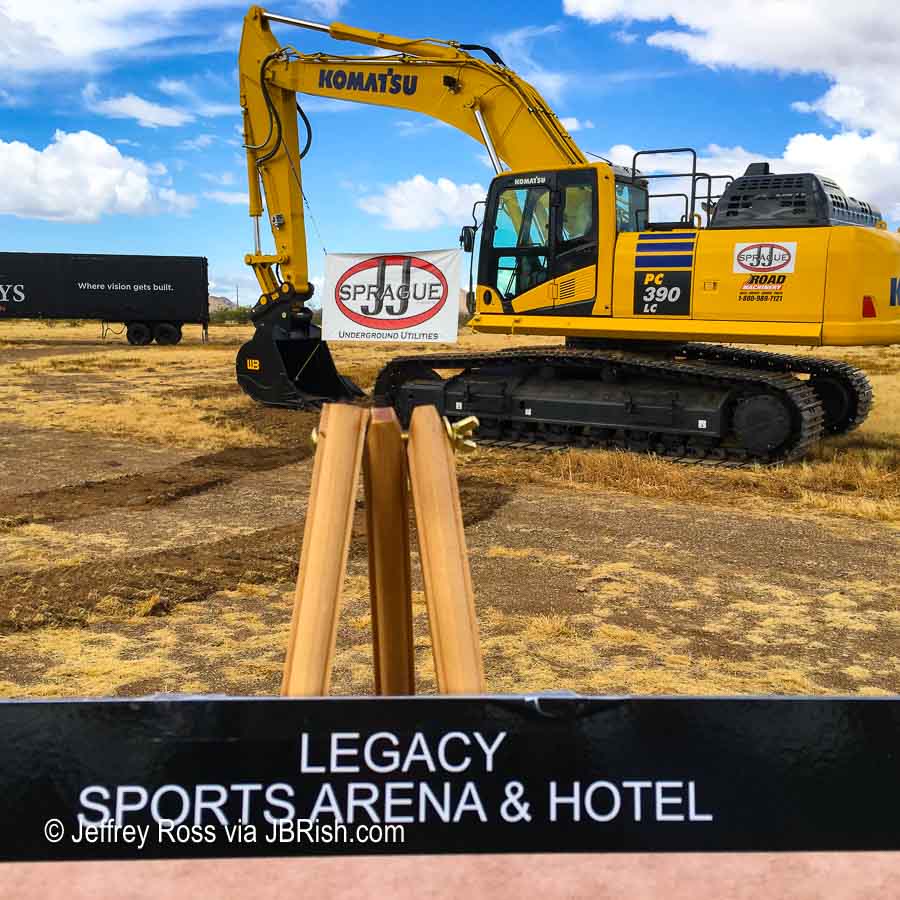 As Rob pointed out during the groundbreaking ceremony, the name Legacy is a tribute to families and family traditions. The name also acknowledges the contributions of active and veteran military members and first-responders and the playing surfaces will be named to honor them. 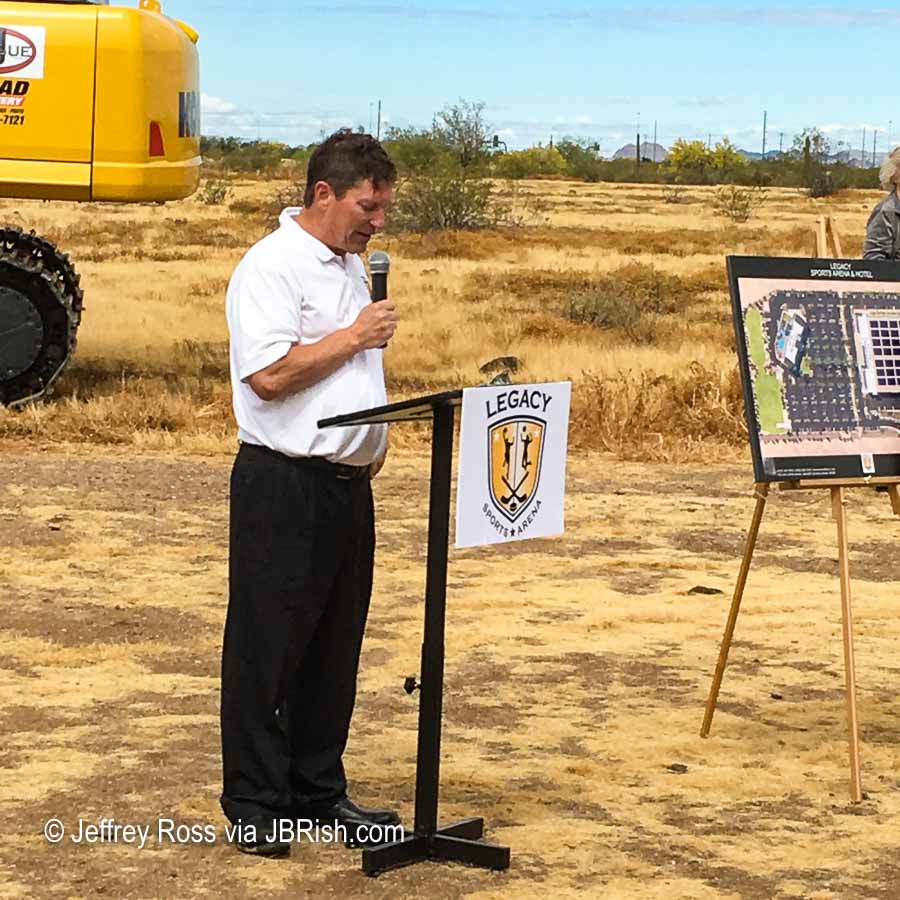 The design was developed to bring the best experiences to both players and sports fans via open space viewing throughout the facility. The arena will incorporate some of the latest developments in green energy with both passive and active low-energy designs part of which will include rooftop solar panels generating electricity year round.

The Legacy Sports Arena portends to be one of the nicest sports facilities in the area and perhaps nation-wide with a restaurant, gymnasium, concession venue, artificial ice rink and other sports resources upstairs.

The Legacy sports building would be innovative as a stand alone project, but Rob Eaton and the designers had more than that in mind when they created a vision for a destination facility. Hoping to attract tournament play, conventions, family vacationers and special events, in addition to the 170,000+ square foot sports arena, there will also be a hotel conceived specifically for players and spectators.

The lodging will incorporate larger team rooms and special amenities via available suites for team members as well as rooms for sports oriented families and guests.

Everyone who enjoys watching or playing sports should be excited about the future of the Legacy Sports Project. Congratulations to everyone involved for creating such a strong vision that will provide wonderful opportunities for the Phoenix metropolitan area.

Best wishes for much success!

Follow the News and Development of Legacy Sports Arena 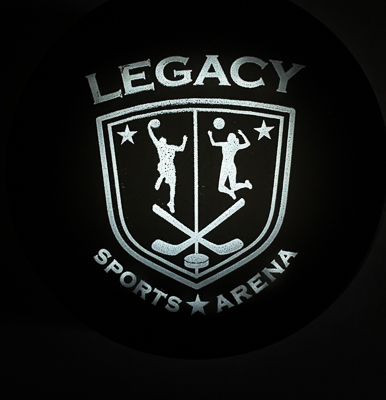 Life in the desert keeps me on my toes especially since I enjoy hiking when the weather is reasonable. There is a group of cactus in the Sonoran Desert known as Chollas and there is quite a variety of them. The picture below is part of a Cholla (cactus). Notice all of those thorns!

This is certainly one cactus you do not want to touch. If you study the “arms,” you can see that they are significantly segmented by design. Nature offers this advantage to the plant by allowing the appendages to easily break off and embed in the fur or skin of passing animals and perhaps drop off to gain a foothold elsewhere. They do easily embed in human skin via the same procedure; trust me!

While this would not be a prize winning picture, I appreciated the light outlining the needles on the arms and presenting the contrast of light and dark colors. I often find that there is interest and beauty all around if we take time to look. 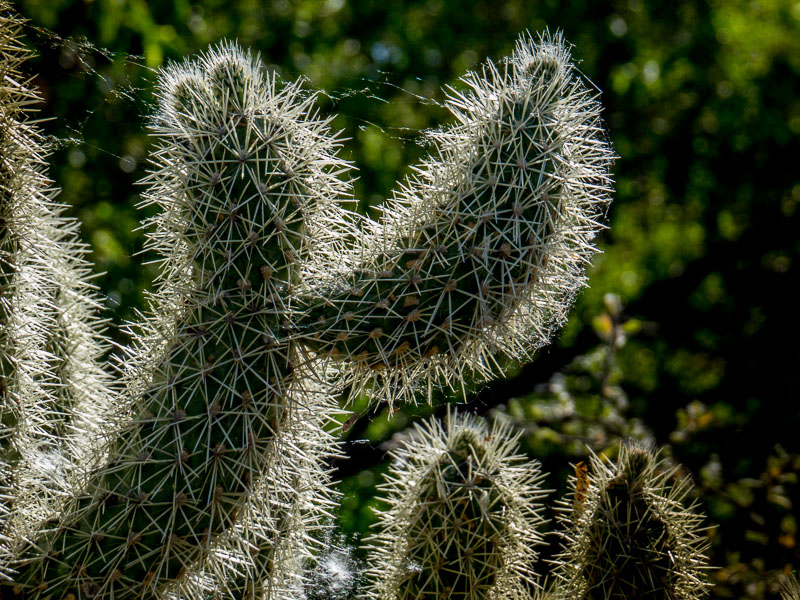 A Cholla cactus found along the main trail at Jewel of the Creek riparian area, Cave Creek, AZ

As followers of JBRish.com know, I live on the edge of the desert in North Phoenix only a few miles from Cave Creek, Arizona. As such, we have an interesting array of wildlife including many birds. One of my hobbies is trying to identify as many birds as possible when I can see them and/or capture them with a camera.

Today, a hawk landed on a telephone pole near the back corner of our yard. I have a Canon Powershot SX50 HS which has a very large zoom and allows me to get relatively close to birds even if they are far away. Since this bird was large, it made it just a bit easier.

I took these two pictures just before the hawk flew away. 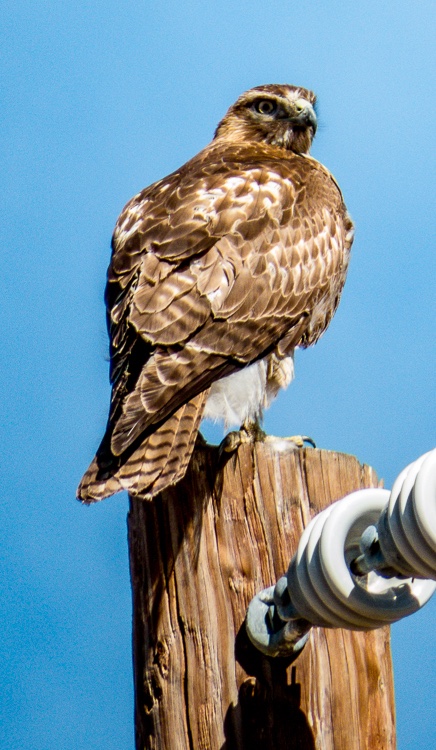 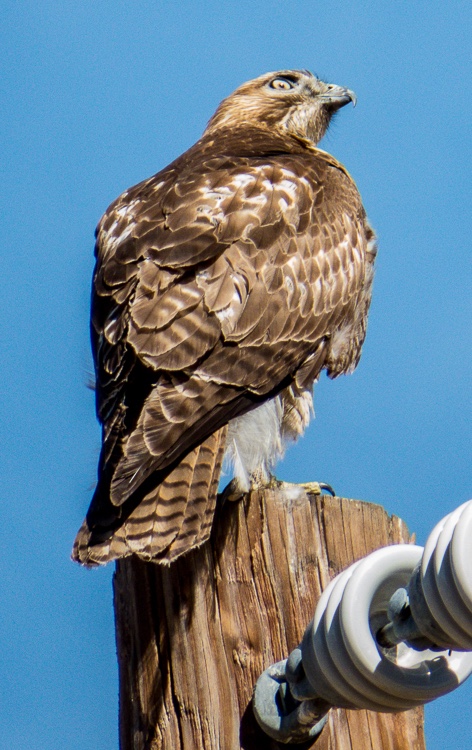 What birds reside in your area?

I was walking by my picture window yesterday afternoon and I saw this bird perched on a wire near a telephone pole. I hadn’t seen this bird in our neighborhood before, but recognized its hawk-like persona and thought it might be an American Kestrel.

I posted the picture on the Bird Forum and sure enough some of the experienced birders there confirmed it was an American Kestrel. They ventured, perhaps, that this is a female because of the coloration. I am sorry that the bird was so far away, but these were the best pictures I could get. 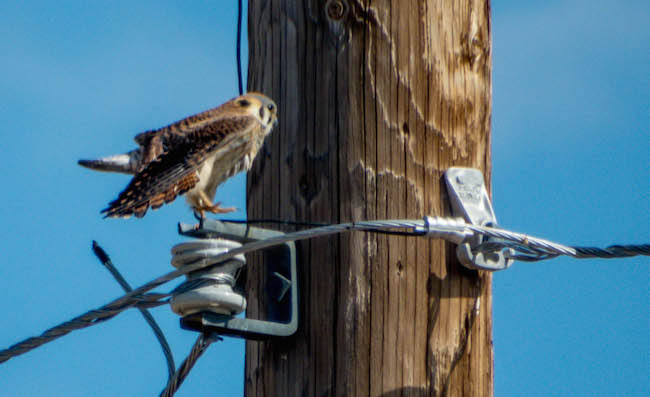 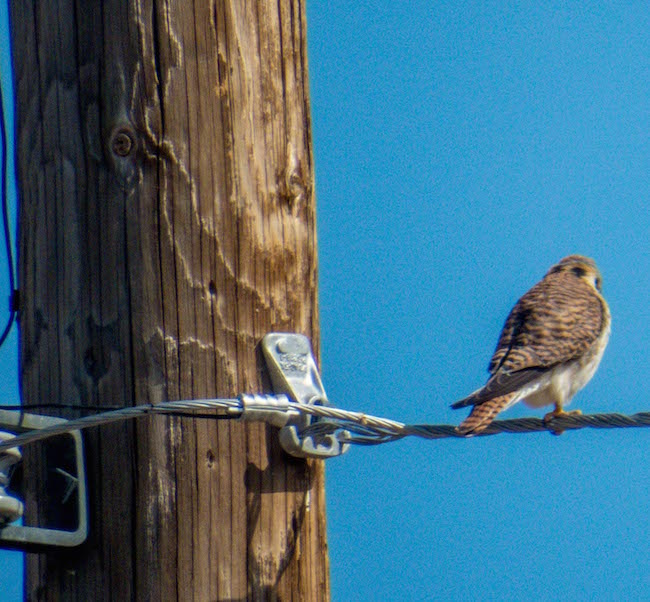 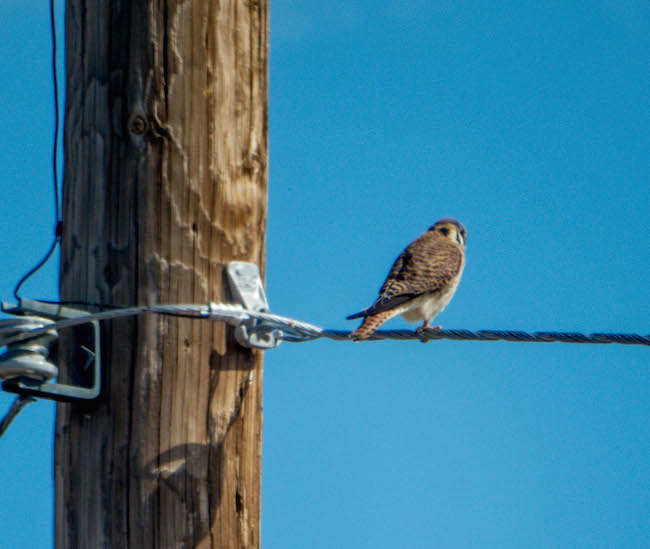 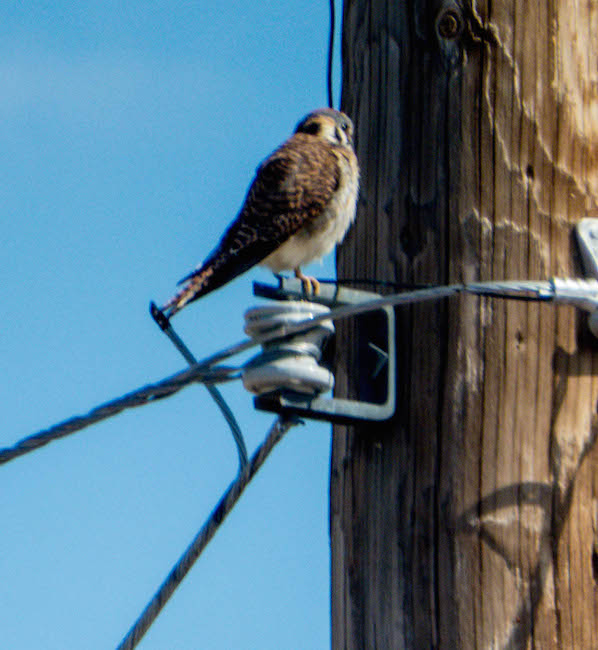 Try as I might, I could not get that bird to turn around!

This past month was a busy time for us with a number of visitors to our desert home. Many of our guests came from the north or northeast to enjoy our warmer days and sample an early spring. One of our favorite places to take people who want to walk in the desert is the Jewel of the Creek Preserve near the Spur Cross Conservation Area in Cave Creek, AZ.

Our last few guests of the month were treated to the Jewel with a beautiful spring day at the creek. It was warm, but a soft breeze made it quite bearable and the addition of several canopied stops made it that much more pleasant.

As we began our descent to the creek we saw many beautiful cactus in bloom.

The yellow, near orange, Englemann’s Prickly Pear was one of the first to greet us. 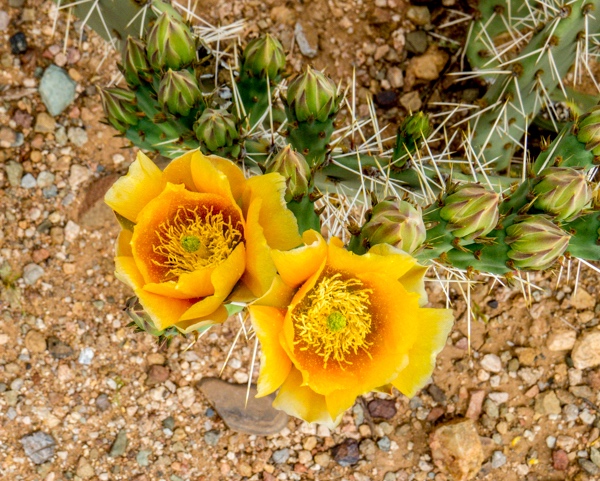 Perhaps the most spectacular blooms were on the Engelmann’s Hedgehog cactus. The twin blooms below were a portent of things to come. 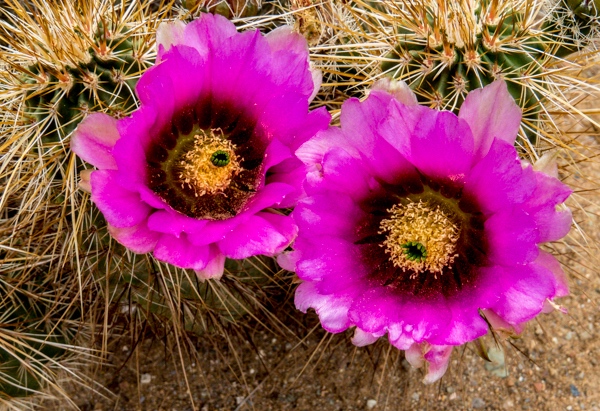 It appears as a near contradiction that such a delicate flower can be nestled among these sharp, spiny needles, but in the desert plants survive the animal marauders by having such defenses. 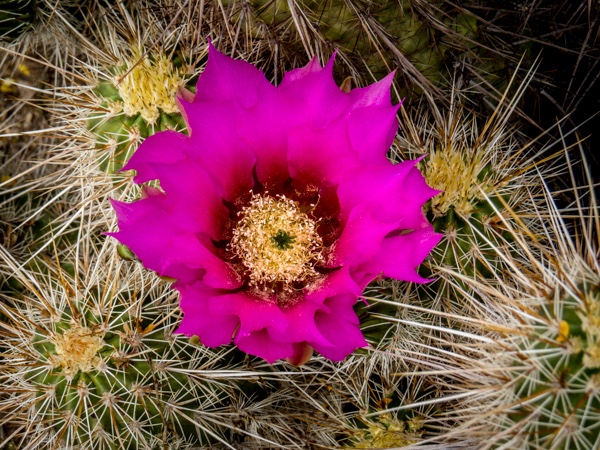 As the days wear on, the Hedgehog cactus begin to close shop and create an urn-like shape. 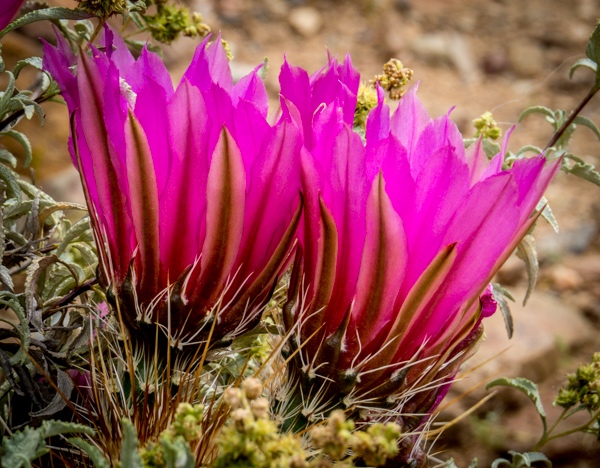 The Sonoran Desert has probably achieved a level of notoriety because of some of their desert denizens and usually we see many lizards, but not too many snakes. On this hike, however we were “treated” to a couple of rattlesnake sightings. The fellow below briefly posed for us as he meandered along his route. We kept our distance, but were able to get some good pictures. 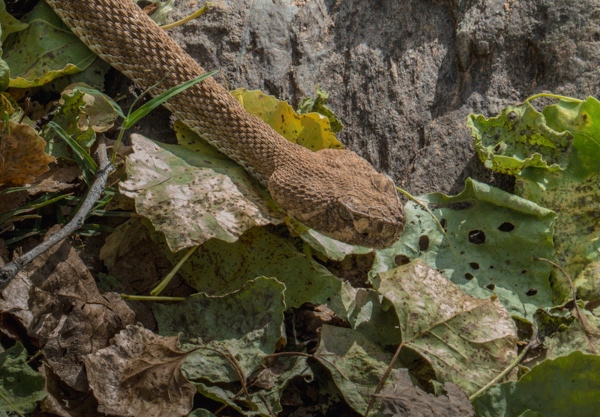 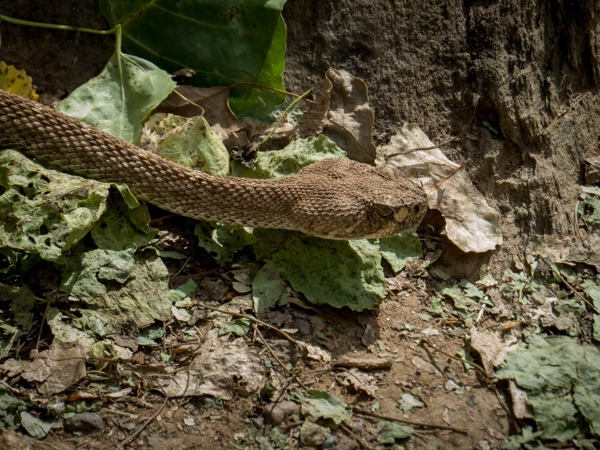 We estimate that this snake was approximately 36-40 inches long. 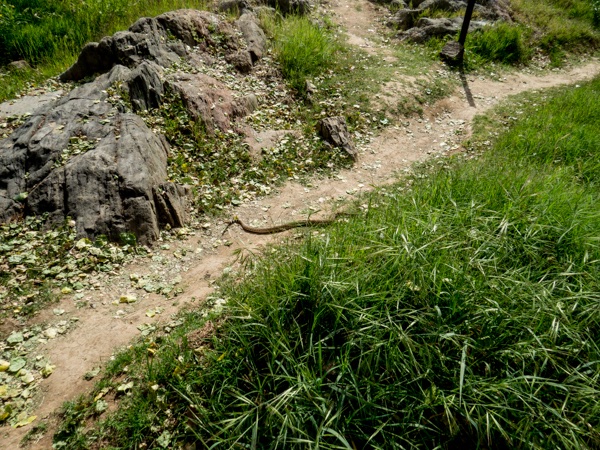 The trees were in their glory as well. In addition to the Palo Verdes, the Velvet Mesquites were strutting their frothy catkins. 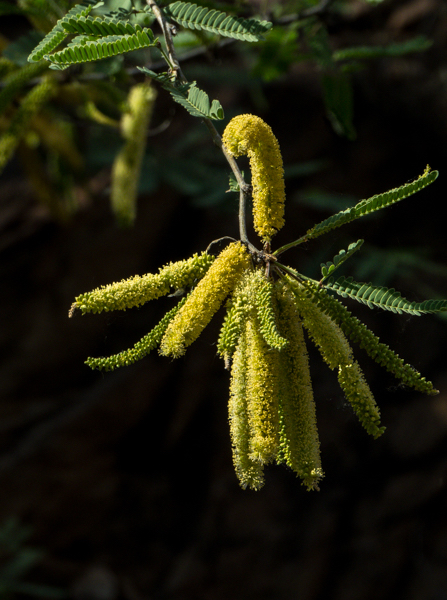 About ten minutes after seeing the first rattlesnake, we came across our second rattler. It is hard to see, but the head of the snake is inside the yellow circle with most of the body above. 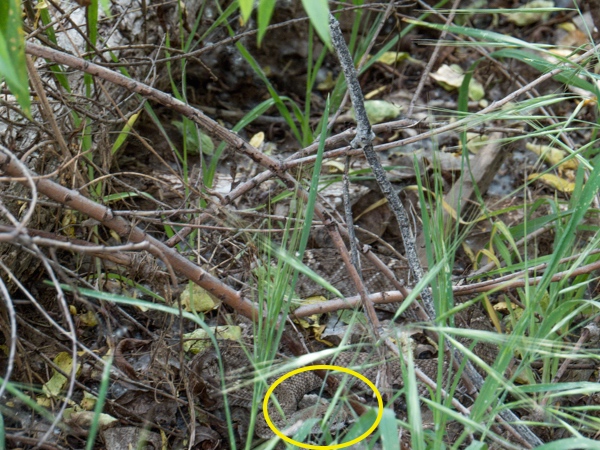 We decided that we had enough snake encounters and began the return trip to the trail head. Along the way, this Cholla was highlighted by the arc of the sun. The dark green of the flesh juxtaposed against the lighter needles created a beautiful pattern. 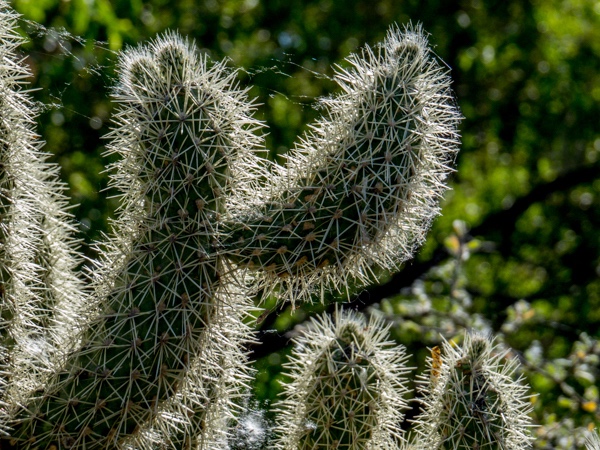 Some of the Prickly Pear cactus were a deeper orange color as opposed to the more traditional yellow. 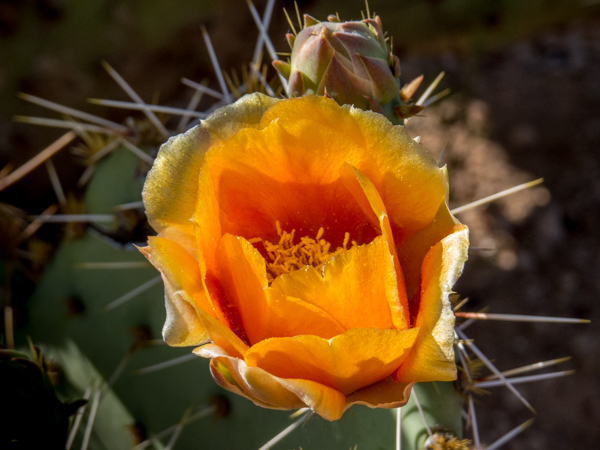 At the start of the trail this lone Compass Barrel cactus (my best guess) stands watch in the middle of the path to greet those who are coming or going. Since this is a managed area cared for by the Foothills Land Trust, it will probably survive and thrive. 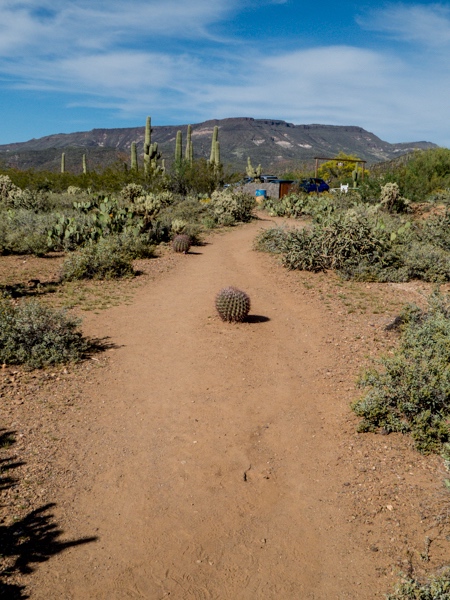 If you are in the Cave Creek, AZ area, and you enjoy hiking, I think a walk along the Jewel of the Creek would be a worthy and manageable adventure!

Several years ago we decided to plant a snail vine (Vigna Caracalla) in the courtyard of our home in northern Phoenix. This is a good plant for our particular climate; tolerating reflected heat and a great amount of sun exposure and able to tolerate moderate freezes. (If the frost kills the top; cut to the ground and it will re-bloom in the spring). As this would be a focal area, a special trellis that would accommodate an eight foot expanse in front of an inside wall was required. A trip to an eclectic pottery and home furnishing store in nearby Cave Creek that was “going out of business” provided a sheet metal screen of smiling suns! Slightly damaged; (the blemish that prompted its reduced price was negligible) the screen was cut in two even sections to facilitate ease of installation. Over the years, the weight of the new growth has required some staking with rebar and wire, but the effect is still impressive!

Note: this vine (at least in our particular area) develops mildew each year during the humid part of our summer; after a significant re-cutting and application of Bayer Advanced Disease Control for Rose, Flower and Shrubs Concentrate, it resumes vigorous regrowth. 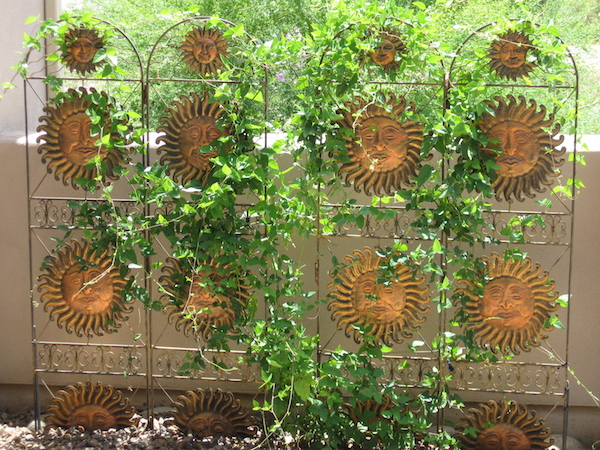 The Trellis with Foliage Beginning to Fill the Voids 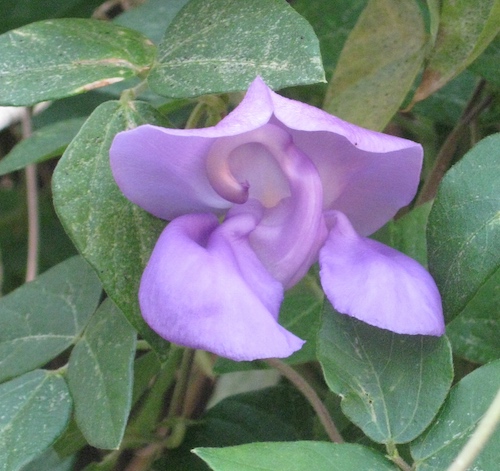