After a pickleballer plays their first several games, they soon understand that the Non-Volley Zone (see diagram below) is often referred to as the Kitchen. 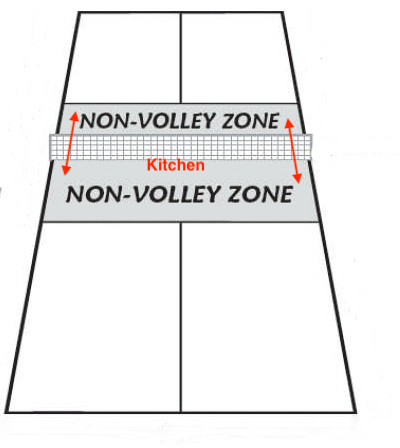 Picture Courtesy of School Specialty – Modified for this post.

As always, let’s check to see what the rulebook tells us about this situation. SECTION 9 of the 2019 USAPA & IFP Official Tournament Rulebook (pp. 36-37) goes into detail about the non-volley zone rules.

It seems to me there are four important subsections regarding this discussion.

9.A. All volleys must be initiated outside of the non-volley zone.

It is a fault if a person volleys the ball (hits it in the air. i.e without a bounce) while standing inside the NVZ. NOTE: It would also be a fault if a player volleys a ball and their foot is touching any part of the NVZ line even if the rest of their body is not in the kitchen.

9.E. A player may enter the non-volley zone at any time except when that player is volleying the ball.

It is not a fault to enter the NVZ at any time as long as that player does not volley the ball. A player can remain the NVZ the entire game if they wish. Of course this is not a good strategy and would be a rather absurd behavior, but there is no rule against it.

9.F. A player may enter the non-volley zone before or after returning any ball that bounces.

A player may remain inside the NVZ after a bounced ball is returned. They do not have to exit the NVZ at any specified time interval.

Most accomplished players remain very close to, but not in, the NVZ during much of the game. If a ball falls into the NVZ and bounces, they quickly go after the ball, return it and then step back out of the NVZ. This enables the player to volley a ball that comes their way because they have vacated the NVZ.

I would be remiss if I didn’t point out another important, and often misunderstood nuance about the NVZ highlighted below in section 9C.

9. C. – It is a fault if the player’s momentum causes the player to contact anything that is touching the non-volley zone, including the player’s partner.

9.C.1. It is a fault even if the ball is declared dead before the player contacts the non-volley zone.

NOTE – These are not the ONLY rules regarding the NVZ. I only selected those sections that help to answer the underlying basic question of when a player can enter the NVZ without creating a fault.

I believe any serious pickleball player can learn quite a bit by reading the USAPA & IFP Official Tournament Rulebook. You can order your copy HERE! You can also download a free PDF HERE.

If you have questions, leave them in the comment section and I will do my best to answer them.

Check out Additional Pickleball Information and Videos! (for all players including average to more experienced players)