Take a Photograph from Bland to Grand

Followers of JBRish know that one of my interests and near passion is photography. I do enjoy trying to capture the best images possible with the equipment I have. I am an enthusiastic amateur and freely admit that I have much to learn.

My main camera for a long time was a Canon point-and-shoot such as the Canon PowerShot A590 IS [ Reivew here ] which is an 8 mp model. FYI – The industry is currently centered around a median size of approximately 24 mp. By today’s standard, this is a relic!

That camera has gone on many trips from Peru to Yosemite National Park. I have taken thousands of pictures with it and I still use that camera under certain circumstances and for the example photos below.

This camera has 12.1 megapixels which is a fair jump from the AS590 mentioned above. That is not the reason I bought the SX50 HS however. It had two very important features 1) it had a long zoom for wildlife photographs. I enjoy birding and this would help me identify birds I saw and 2) it could shoot in the RAW format.

For those who don’t know what the RAW format is, you can find out more at the link below, but I will try to explain this as simply and as non-technically as possible. I am sure I am leaving important information by the side of the road, but I think most readers will get the idea.

What a digital camera does…

A digital camera records a scene in code. It doesn’t record the scene like a film camera would record it. Instead, it has millions of dots (pixels) and it “interprets” the scene and colors these millions of dots to replicate the view that the photographer wants to save. The camera writes this information to a file, usually in jpg (JPEG) format. Once that is done, the built-in software interprets how the colors red, blue, yellow, green, etc. represented when someone opens the file. This information is written in code so the camera can record it in as little space as possible and then interpret it visually when a user wants to view the photograph.

When shooting in RAW format, the camera records the scene as it is and allows the photographer to decide how dark the darks are, how bright the highlights should be, how exactly the colors will be represented, etc. In other words, instead of enabling the camera to “interpret” the scene, the photographer gets to interpret the scene. This is a good thing because cameras may not be able to capture the full spectrum of lights and darks, reds and blues, etc. in a specific situation. The photographer can then modify many aspects of the digital image to more closely represent what he or she saw, or take it in a totally creative direction. The drawback is that it takes extra steps to work with RAW data and it can be time consuming. (We will skip the philosophical discussions at this point)

What Photo Editor Should I Use?

That is a very good question and one with which I struggled when I first became interested in working with my photos once they were moved to the computer and out of the camera. This is called post processing. After trying several programs like iPhoto, Photoshop Essentials, and a few other free offerings, I decided to subscribe to the Adobe Cloud suite which includes Lightroom (LR), Photoshop (PS), Camera RAW and more. If you can afford the less than $10 per month subscription plan, I highly recommend it. I do most of my post processing in LR. I do plan to learn how to make better use of PS, but at this point I don’t find LR too limiting.

NOTE – I learned Lightroom predominantly from Anthony Morganti. Anthony is a professional photographer with a wealth of information in his videos. These are free to view and a great way to learn Lightroom.

If you want to learn Lightroom basics, I can’t recommend his videos enough. He is thorough, interesting and easy to understand. Click HERE to see his instructional videos.

An Example for Your Consideration

NOTE – This is one of the most simple images captured on my relic of a point-and-shoot camera, the AS590 IS described above. It started as a JPG file so there was a limit to the amount of post processing I could do to the file. Even with that in mind, however, I think you will appreciate the following example.

The photo below is the original photograph I took on a hike along the Toadstool Trail, at the Grand Staircase-Escalante National Monument, Utah. You can read more about that HERE: 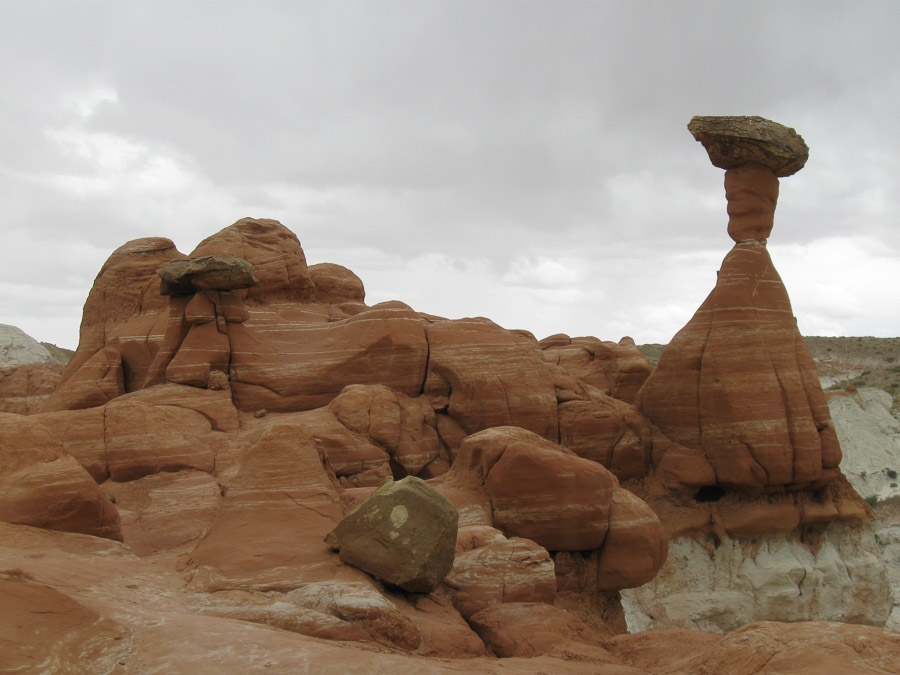 This wasn’t how I remembered the scene when I arrived home so I decided to do some post processing. Unfortunately, the picture was taken with my least capable camera which is only able of saving information in jpg format. This is not the best file format to begin a post processing project, but it was all I had.

I have set up my LR program to add a very modest amount of enhancements, called presets, each time I import a photo into the program. This saves some time and gives me a consistent baseline from which to start. This is the photograph after those modest alterations have been made. 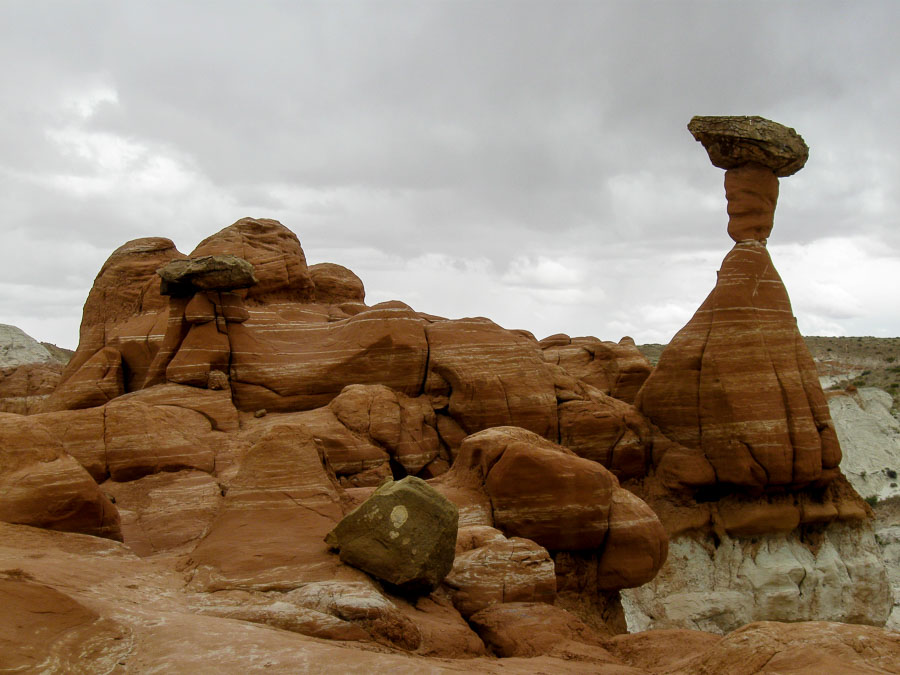 The scene as I remembered was much more dramatic than either of these photographs depict. I then edited (post processed) the image to more closely represent my remembered vision of that particular scene. This is closer to the real, rainy, cloudy view. 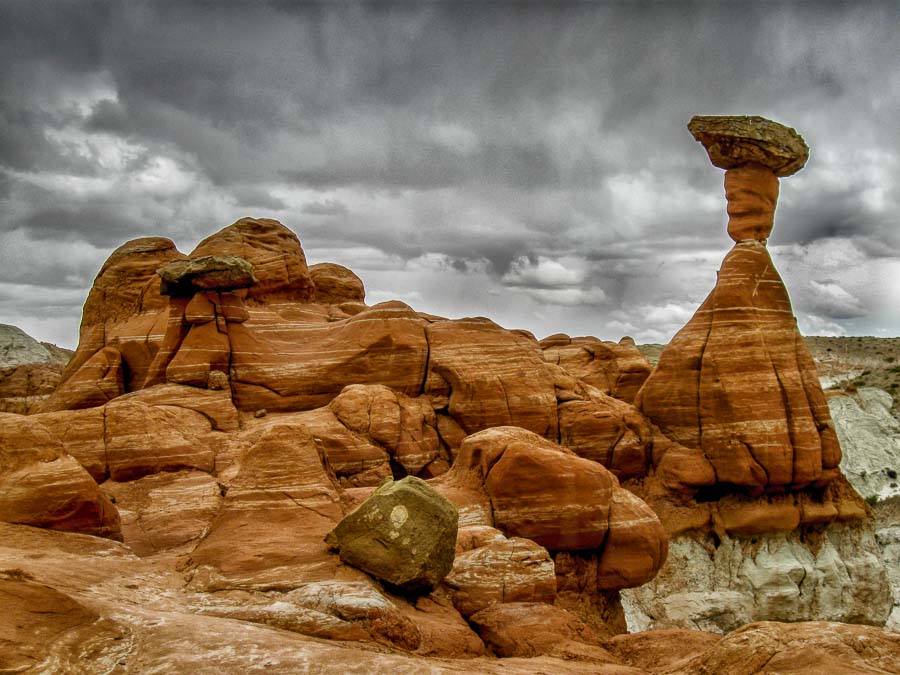 The point I am trying to get across, for those who want to move their creative, artistic, photographic skills up a notch or two and have hertetofore been reluctant, you don’t have to wait. You can get started today with almost any camera you have that captures digital images.

I think most people would agree that the last picture is more artistic/dramatic/picturesque. It is also closer to the way I remember that hike.