NOTE: The Alhambra Palace is a UNESCO World Heritage Site that is magnificent and I do not use that word lightly! There is much to see and admire and I can only offer a scattering of treasures that await visitors. The picture essay below is not comprehensive, but serves as an overview and perhaps introduction to this ancient building and grounds.

One reason many tourists visit Granada, perhaps the main reason, is to tour the Alhambra Palace. Its name is dervied from the red colors of its walls from the Arabic language (The Red One). This majestic structure is strategically set with a view of the entire city. The castle dates back to the 9th century as it evolved from a fortress into a palace using the remains of the Roman fortifications as a starting point.

The primary tourist entrance to the Alhambra is through the Wine Gate which is one of the oldest parts of the palace. There is speculation that this name was caused by a misnomer, Bib al-jamra, i.e. Wine Gate with its intended name, Bib al-hamra – meaning Red Gate.** Notice the white stone with a key in the panel above the arch. The key symbolizes the opening of knowledge or special pathways in Islamic cultures. 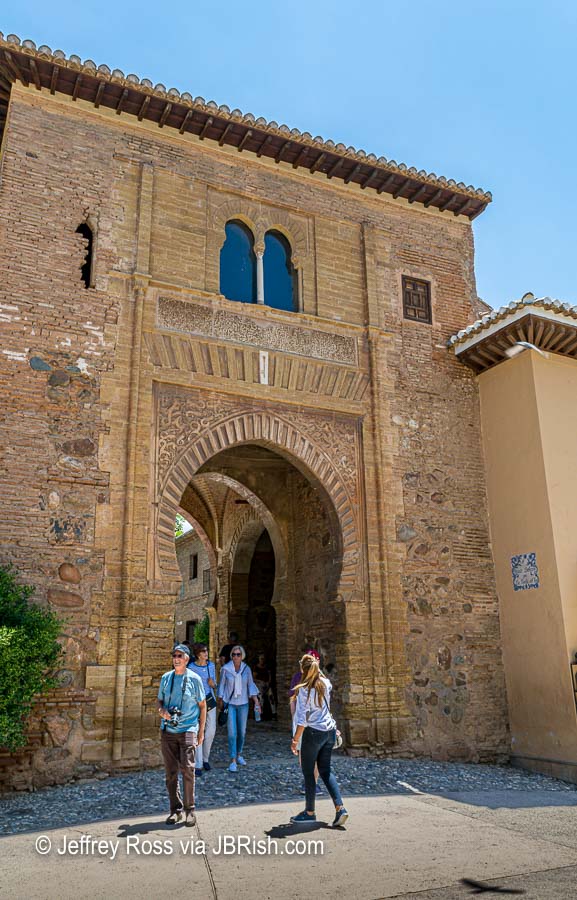 The grounds are something to behold. The numerous garden areas are surrounded by finely manicured shrubs and trees. 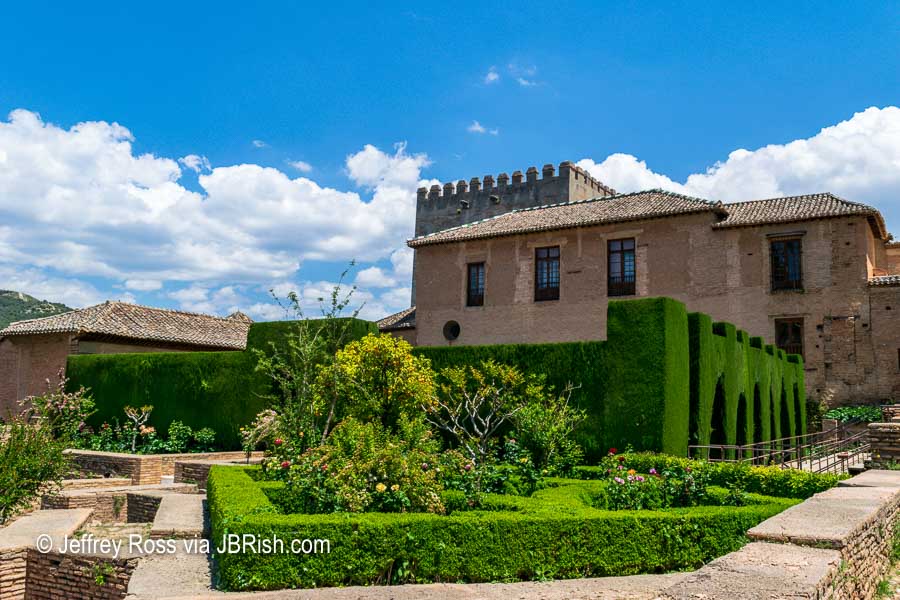 The Nasrid Palace contained the royal quarters comprising the core of the Alhambra. The exquisite detail in the architecture defies belief considering the materials and tools of the day. 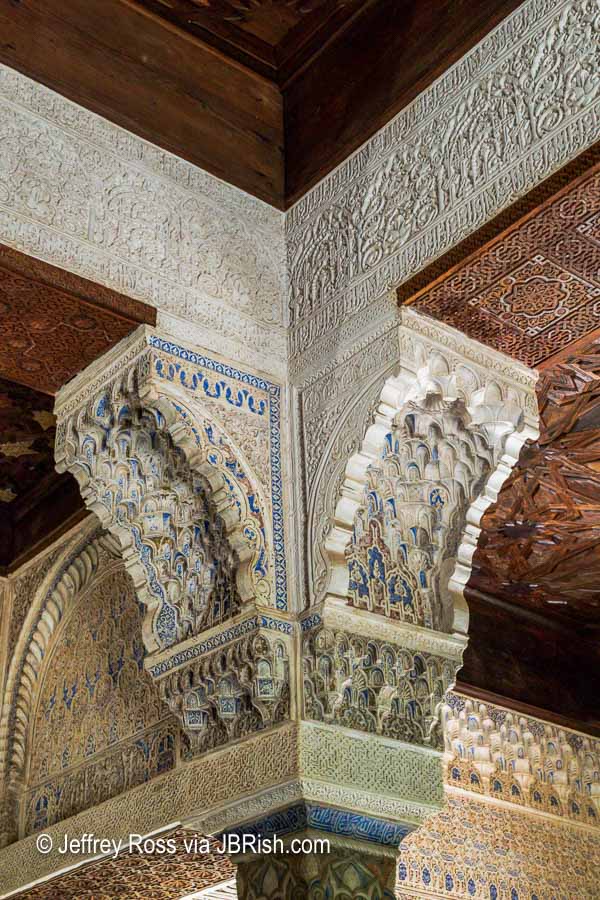 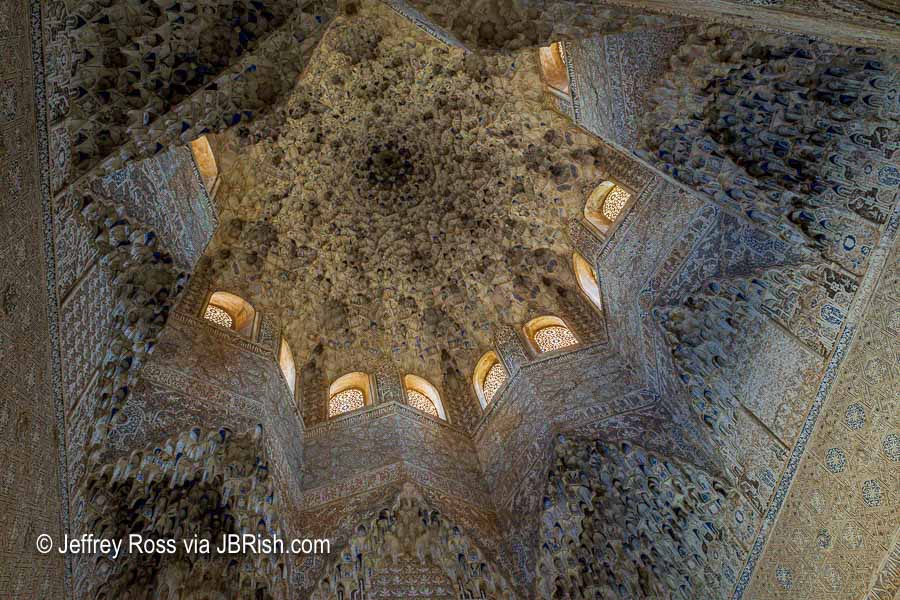 The picture above is the Dome of the Hall of the Abencerrajes (knights) that is comprised of exquisitely detailed plaster work. Reminiscent of some of the formations found in caves, these too are sometimes referred to as stalactites.

Another stunning example of the artistry used to create these domes is in the Hall of the Two Sisters (below) leading to the family living quarters. 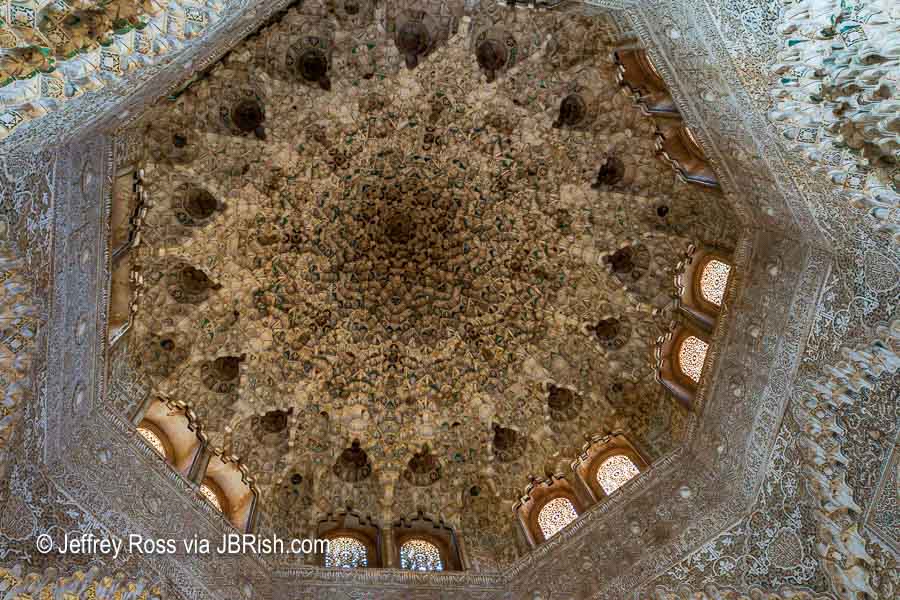 Located in the Lindaraja belvedere is an intricate double arched window. The view of the courtyard is framed by the window with the attractive mosaic patterned walls surrounding it. 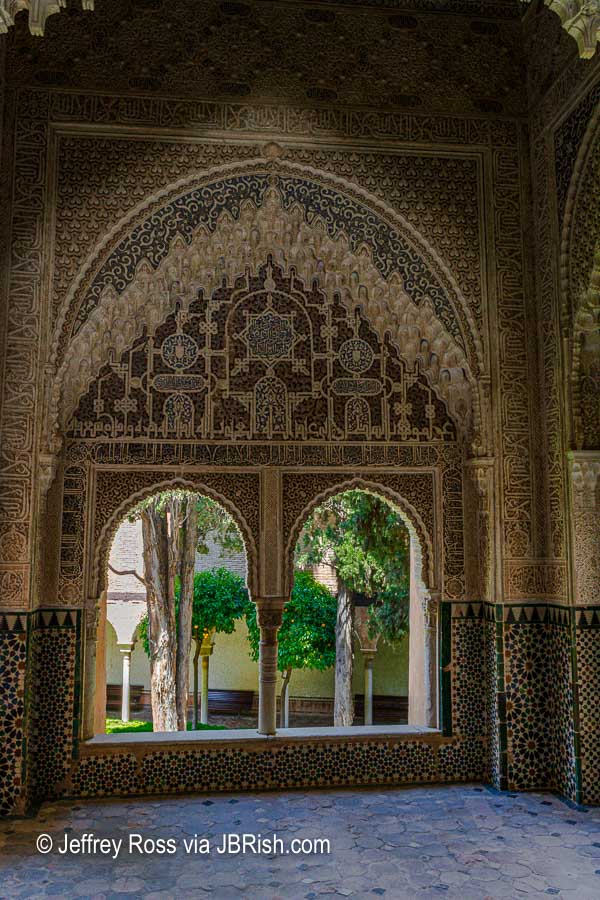 Onlookers appreciate the details and colors in this series of arches. 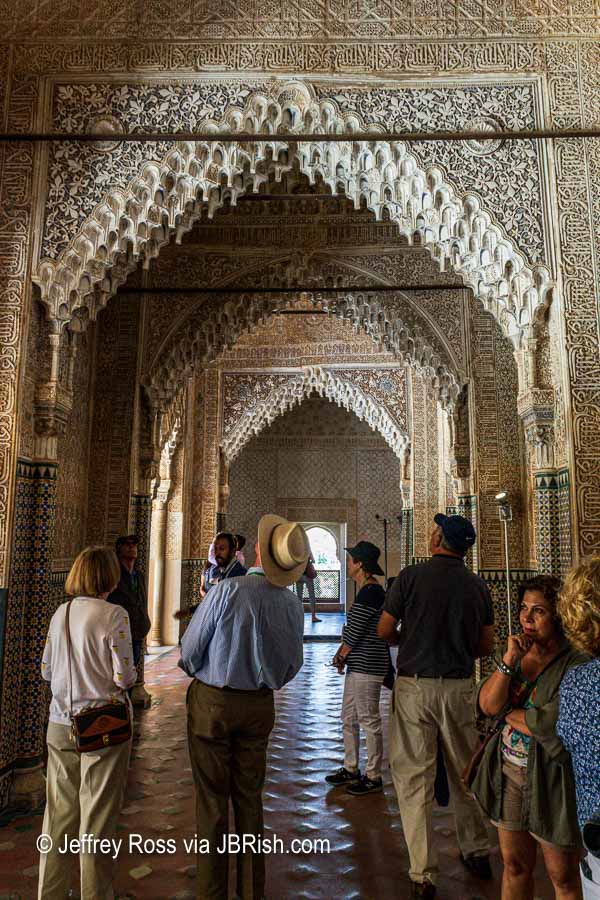 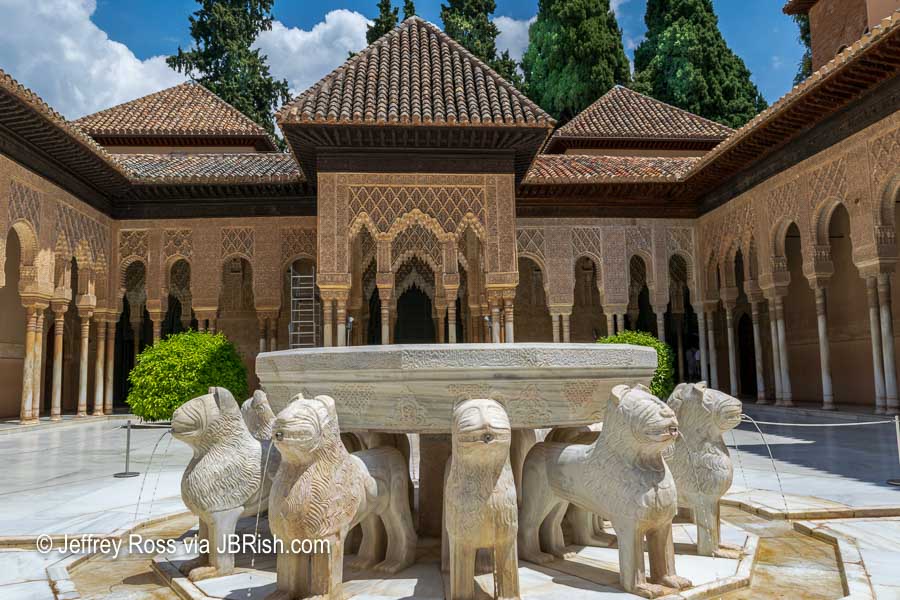 The patio of the lions is the site of one of the most popular attractions. Twelve lions spray water into a marble catch basin surrounding the main fountain. Some researchers have noted that the courtyard facades are more in the style of a Christian cloister rather than the typical Muslim style. 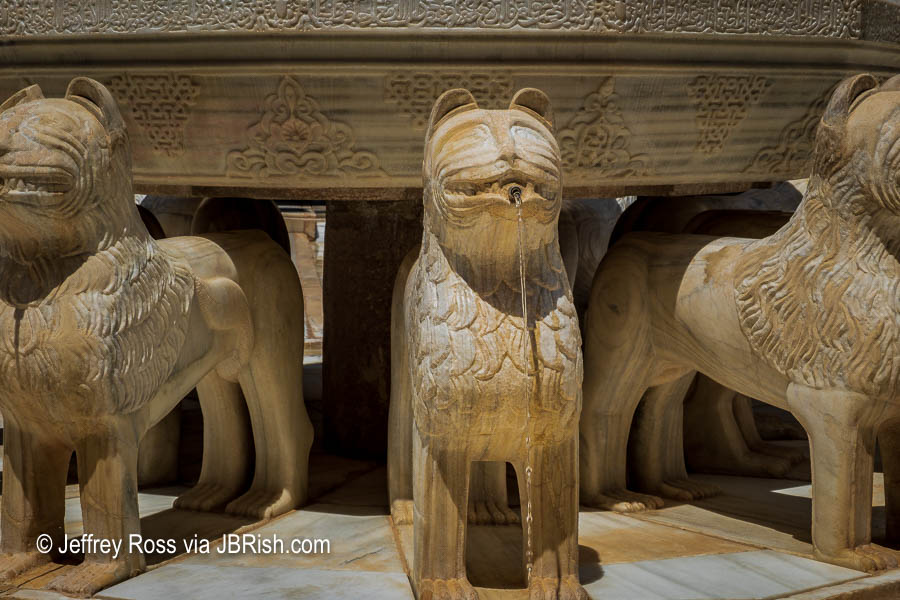 There are many interesting features and areas to see and it is difficult to appreciate all of them. This fountain in the courtyard of the Lindaraja was well-placed among the trees and plantings and can be viewed from several vantage points. 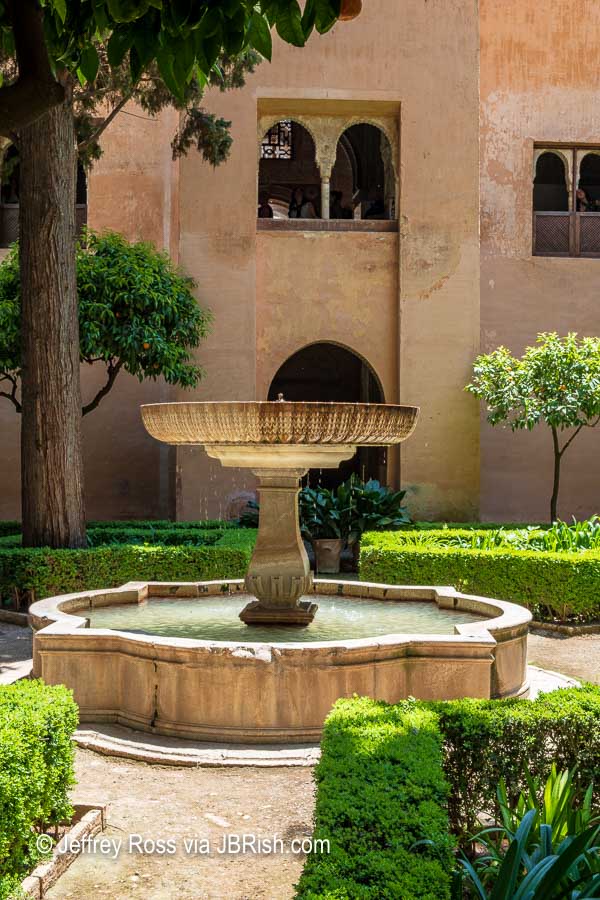 After touring the palace rooms, we headed outside to the gardens. On the way, we passed several other structures and fortifications. 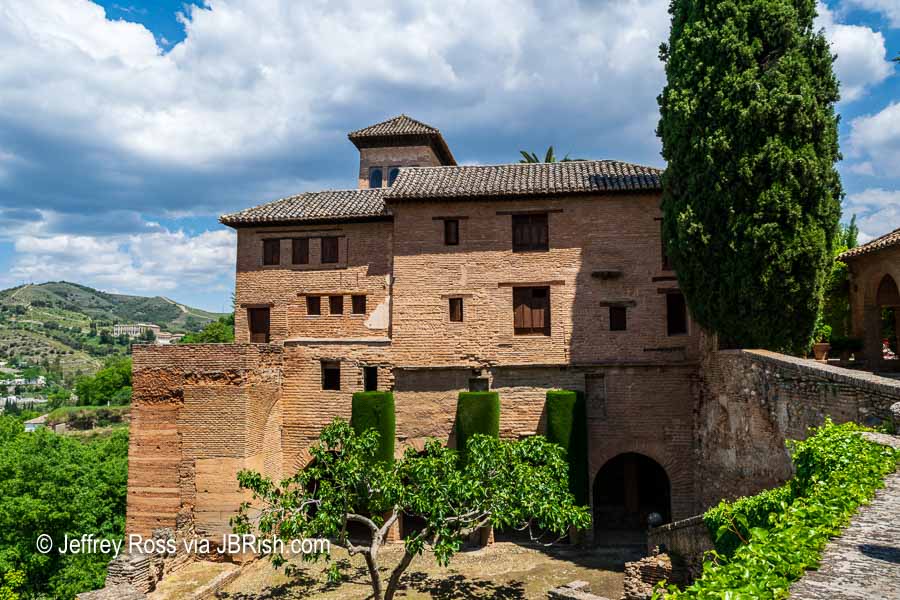 Before arriving at the main gardens, we walked past a terraced garden (below) with a view of the Iglesia del Santa Maria de la Alhambra (Church of Saint Mary) tower. 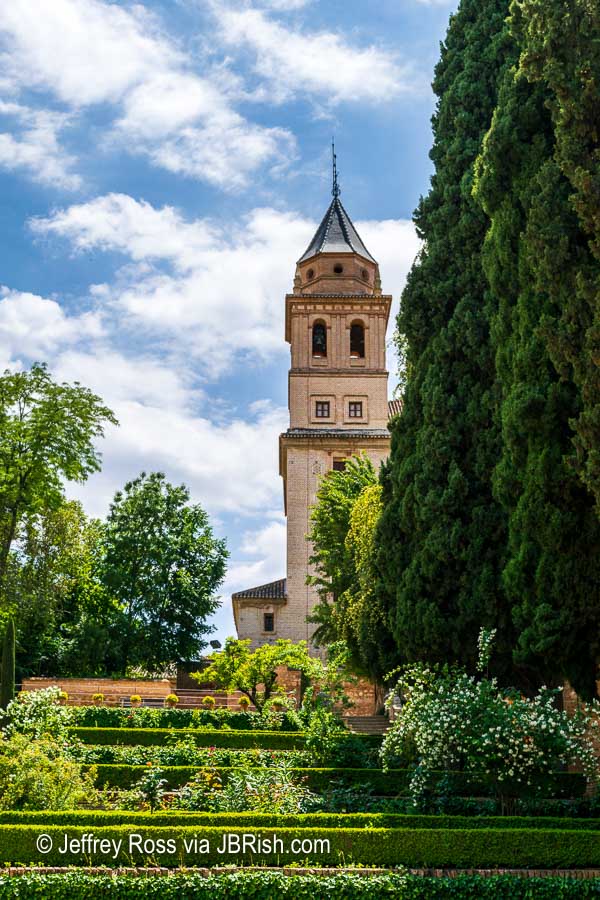 The wall surrounding the fortress had a road that ran along the inside for use as a defensive moat during attacks. It was large enough for horses and riders. 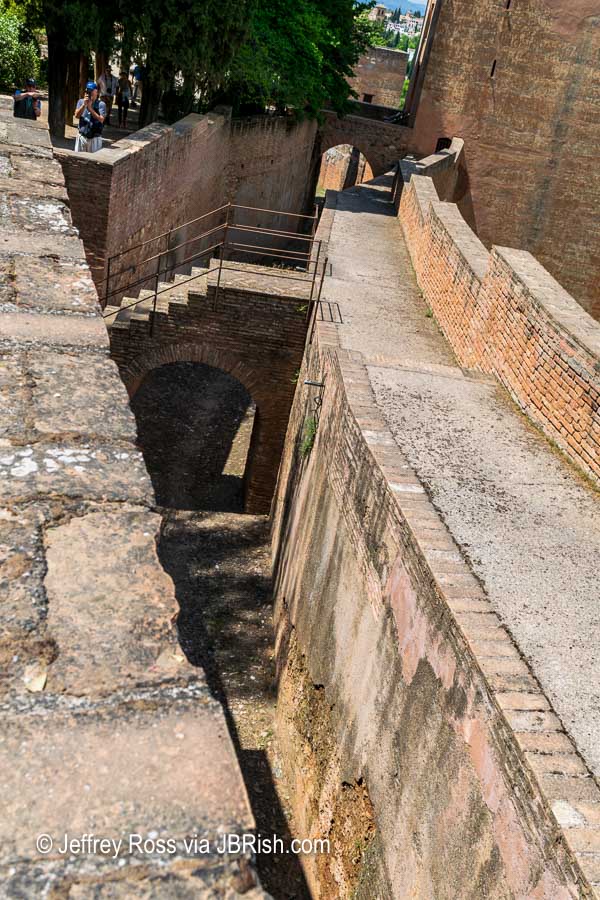 The Generalife Gardens (translates to Garden of the Architect) are built upon the Cerro del Sol (Hill of the Sun) next to the palace. A large pathway led to the more formal displays. 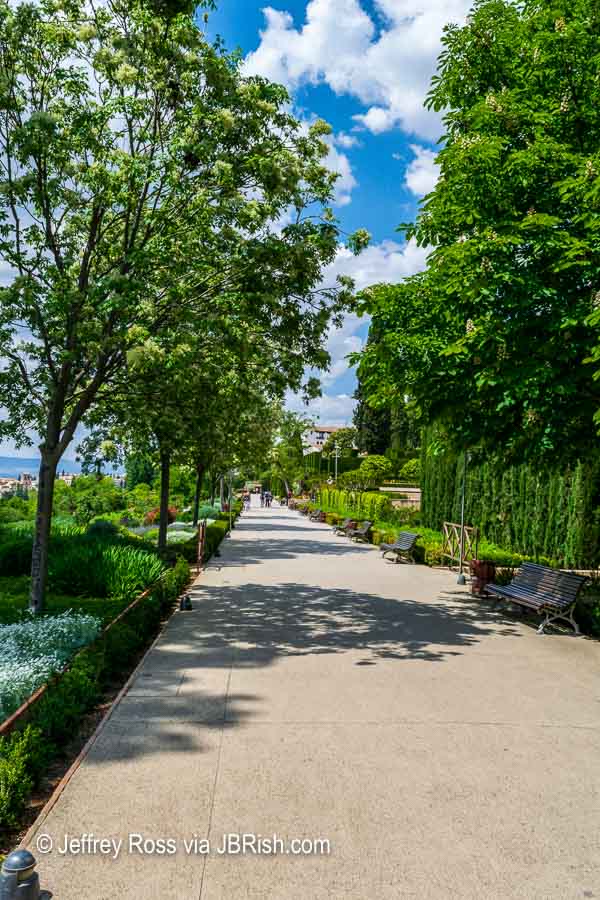 One of the most beautiful presentations is the Court of the Myrtles. The garden courtyard is named after the myrtle bushes which contrast well with the white marble walkways along the sides. The pond reflects the Torre de Comares (Comares Tower) which is key to the striking composition. 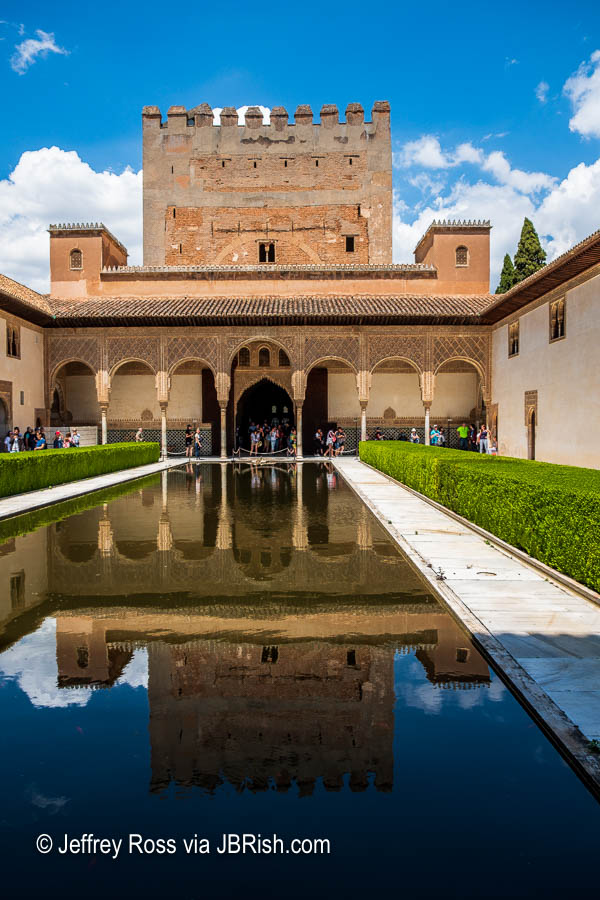 Some doorways leading to the courtyard have complex carvings and should be admired for their craftmanship. 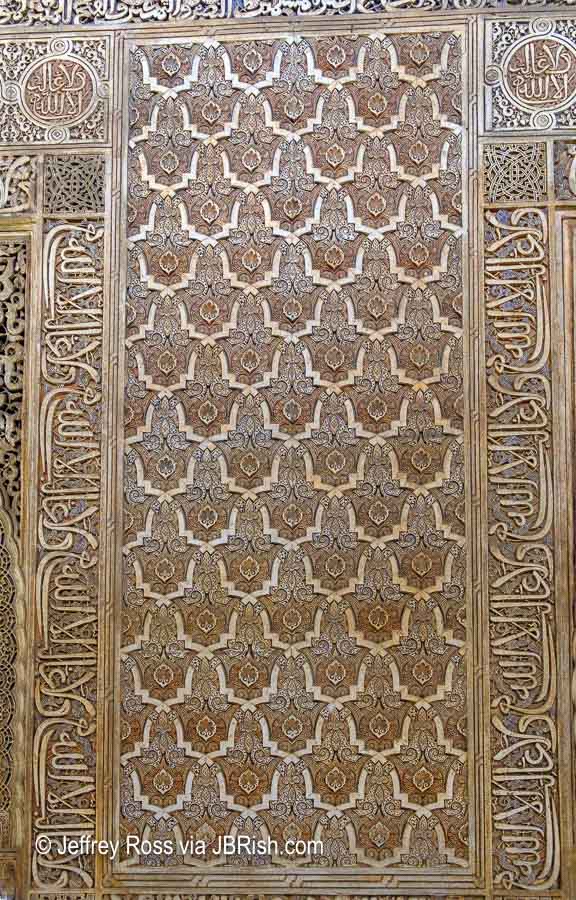 There is another less formal, but perhaps more colorful, garden inelegantly named the Patio de la Acequia (Patio of the Irrigation Ditch). 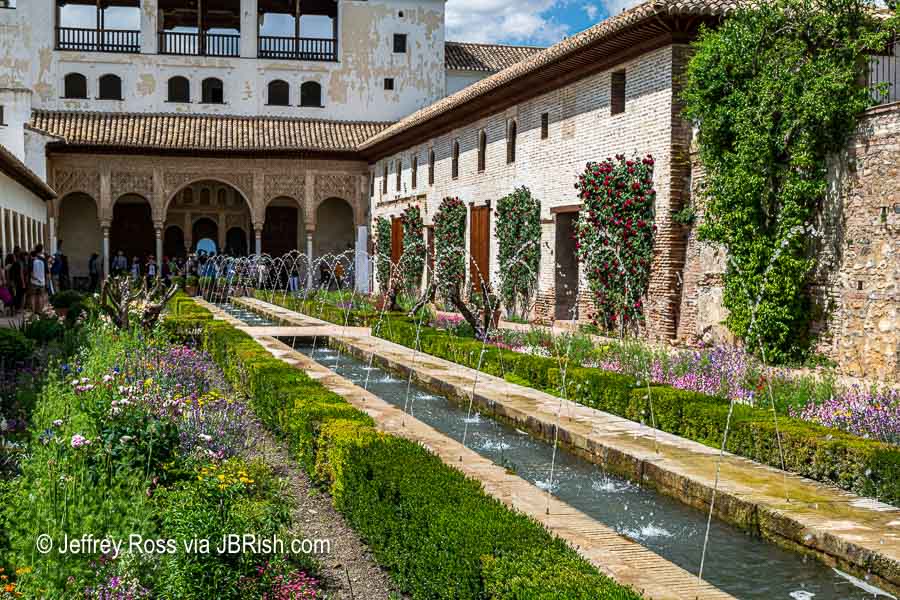 The white second story was added by the Christians when the structure was under their rule and is less detailed and rather bland.

Along the walls, roses were espaliered to great effect alongside large wooden doors. 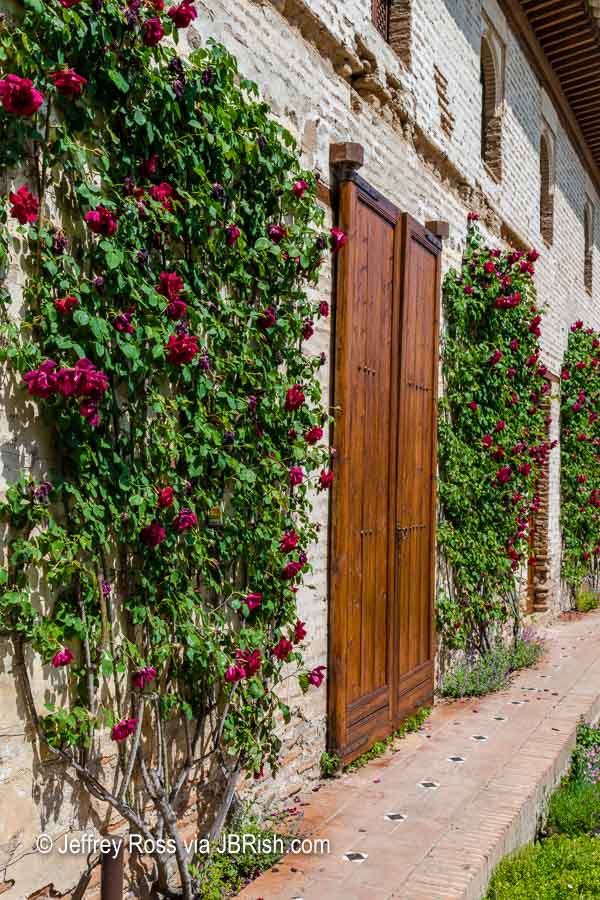 This rose plays well against the stone wall and stands in contrast to the foreground floral display. 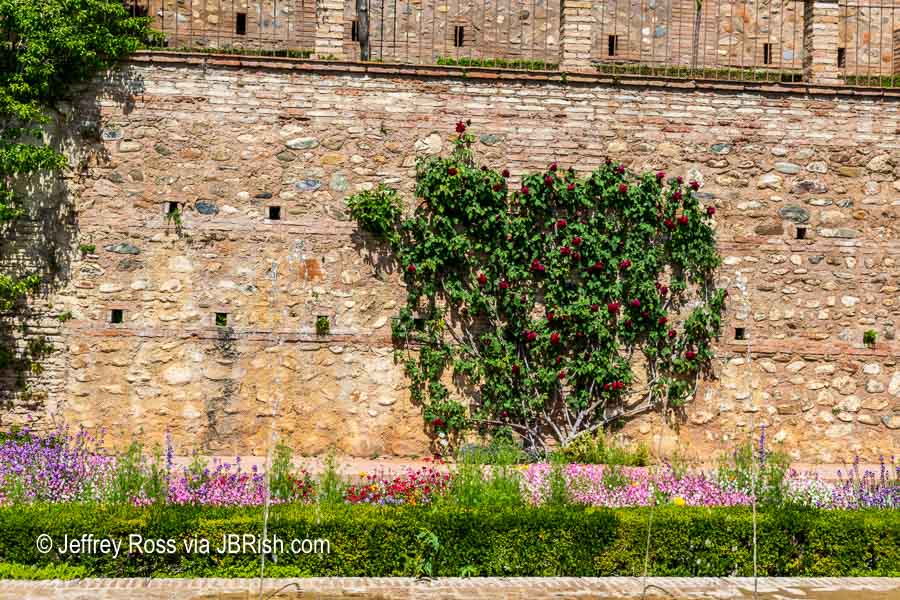 From the hillside overlooking the fortress, the views are breathtaking. 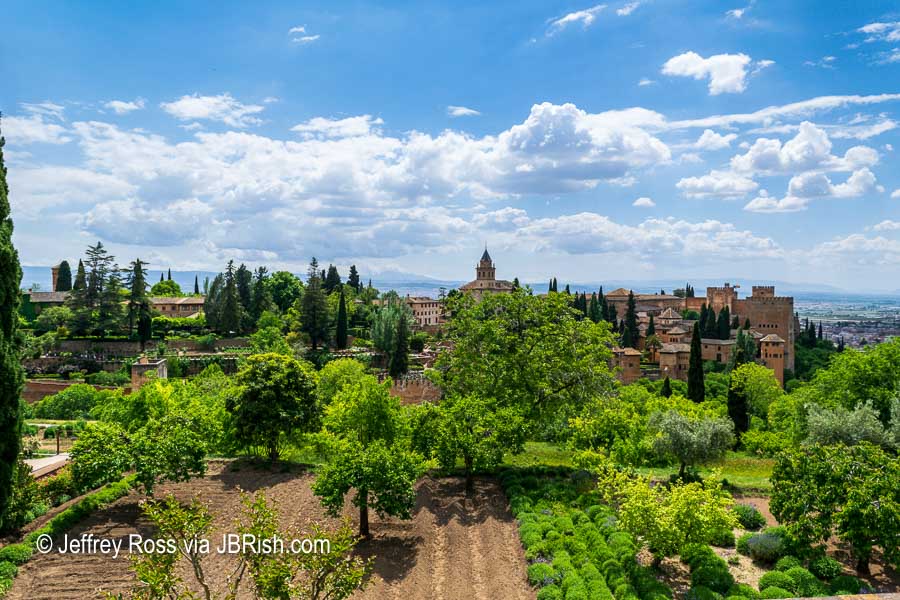 The elevated hillside of the Generalife gardens allow tourists to look out over city of Granada’s Albaycin district which has a strong Muslim influence. 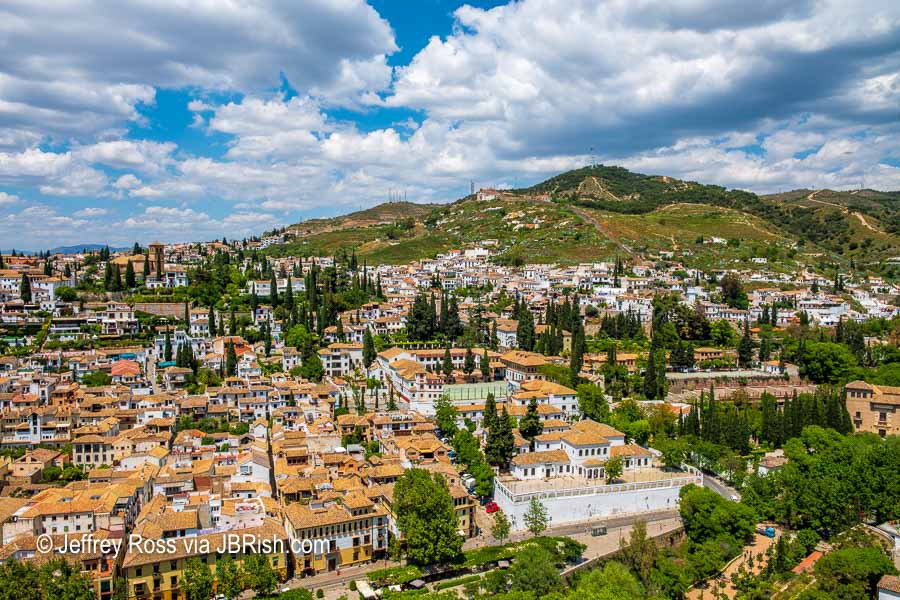 Another interesting picture of the hillside surrounding the fortress. 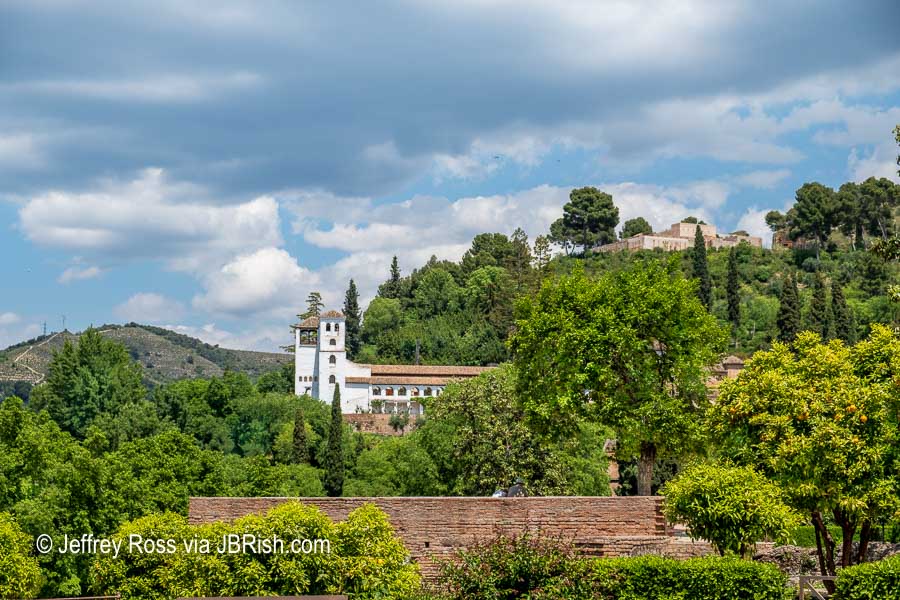 As we returned to the palace proper, we passed a roof garden with a backdrop of mature cypress trees. 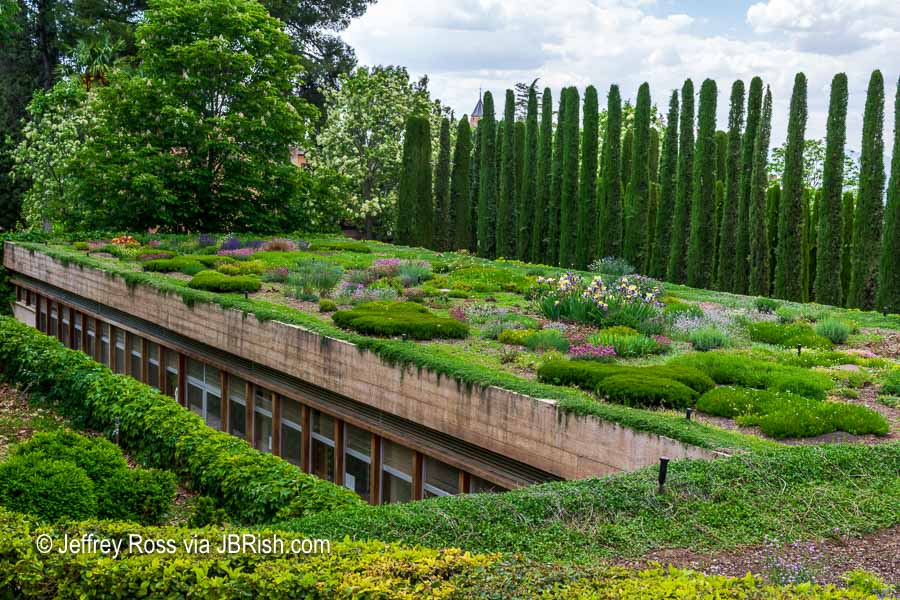 This was a very full day which will remain in our memories and forever provide wonderment.