The video below is of a photographer who was taking photographs of a young male elk in one of our national parks and even though he was abiding by all the rules, the elk started to manifest aggressive behavior. This, unfortunately, would lead to the end of the elk.

As someone who enjoys hiking in our national parks and photographing all wildlife in a safe and respectful manner, I find this very sad.

You can read the follow up below, under the video, for the details. The video itself is an interesting lesson regarding such confrontations.

The notes below are copied from the YouTube page:

Update: I’ve been in contact with the photographer in the above video and we would both like to issue a statement regarding the news of the National Park Service’s decision to put the elk down.

My statement:
I am deeply saddened by the fate of the elk. It has certainly pulled a black cloud over this whirlwind “viral video” experience.

I spoke to the reporter who broke the story and she assured me the decision was based on a pattern of aggressive behavior that began prior to the incident documented in this video. The behavior was the result of visitors feeding the elk and conditioning them to seek food from humans. This video only serves as an example of the elk’s dangerous behavior, not an impetus to it.

Again, it brings me great sadness to learn of this beautiful animal’s demise and the unfortunate circumstances surrounding it.
I’m looking into a destination for proceeds from this video to help the NPS educate visitors on the dangers and consequences of feeding wildlife.

I also want to be clear that James, the photographer, was not complicit in a behavior that led to the elk’s demise, but rather was made an example of the result of such behaviors. The elk approached him from behind, likely looking for food as he was conditioned to do.

Statement from James (the photographer):
I love and respect animals and that’s why I photograph them and don’t hunt them. I am deeply hurt by the loss of such a beautiful creature that in its own way bonded with me. I looked forward to watching him grow to a mature bull as the years passed.

I’m truly heartbroken to know he is gone.

While photographing elk at sunrise in the Cataloochee Valley of Great Smoky Mountains National Park I turned around to see what appeared to be just a curious young bull sniffing a photographer’s camera. I snapped a few frames of the apparent harmless encounter.

But the elk became more interested in making trouble than simply the scent of a camera. He started physically harassing the photographer, escallating to full on head-butts.

I quickly switched the camera to video and let it roll (much of the time wondering when I should seriously consider intervening).

Most people who see this ask why the photographer seems to just take the abuse. I asked him in an email what was going through his head. This is his response:

“My first thoughts were “wow, he’s getting pretty damn close here.” But I’ve been up close before without incident. I hoped being still and passive would see him pass on. When he lowered his antlers to me, I wanted to keep my vitals protected and my head down. I felt that standing up would provoke him more and leave me more vulnerable to goring. I think that while protecting myself with my head down, having my head down was a signal that I was rutting with him. I was concerned at first, but when he started rearing back and lunging at me later on, I got scared and pissed off. That’s when I wagged my finger at him to cut that shit out. I was relieved to see the Ranger coming.

So I guess at some point if the Ranger hadn’t of pulled up, I would have had to disengage the best I could. I’ve joked with my friends that at least he took me for a buck and not a cow!”

A very poignant look at an old institution in New York City, a chess shop. This short documentary tells a compelling tale.

We are in the weather sweet spot in the North Phoenix area and multitudes of people flock to the desert to find relief from the cooler, colder and drearier environs of the northlands. With this influx of “snowbirds,” a number of our friends and relatives arrive on an annual basis and many of them are repeat visitors.

We often face the challenge of providing interesting adventures for them. One of the places we look to is the Phoenix Art Museum. Compared to other major metropolitan areas, I think Phoenix is somewhat small, but the culture offerings are significant.

Our most recent guest is an artist and art student so naturally we gravitated toward the museum. During this visit, we focused on contemporary artists.

One installation I found particularly interesting was created by Mexican artist, Bestsabé Romero and was titled Columna interminable (Endless Column), 2015. The piece was constructed from rubber tires and gold leaf. 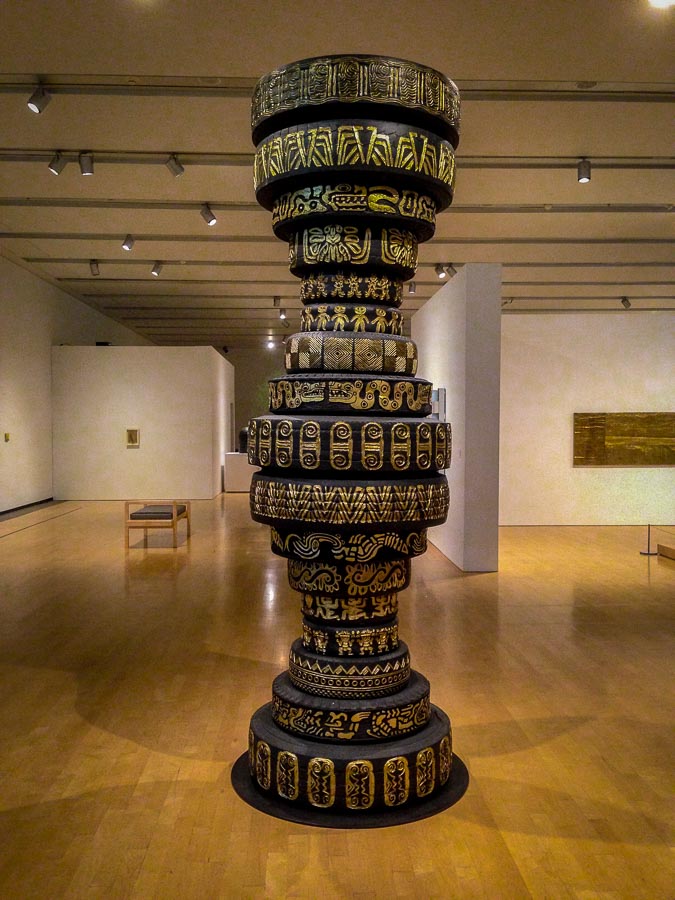 The work focuses on the theme of migration which connects well with the idea of tires. There are a total of seventeen tires with various designs representing cultures from “pre-conquest North, Central, and South America…” 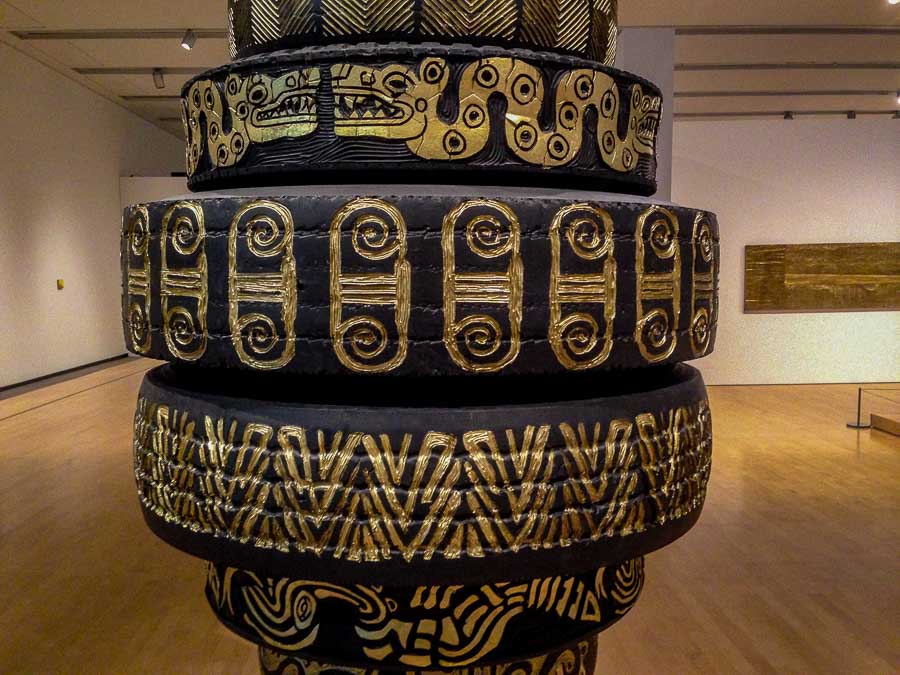 The snake in the topmost tire in the photo above is from the Aztec/Mixtec societies of Mexico while the oval shaped symbols just below are from the Hohokam of Arizona.

In the picture below, the dancing figures with headdress were drawn from the Wari or Moche of Peru with the abstract design below representing the Mimbres from New Mexico. 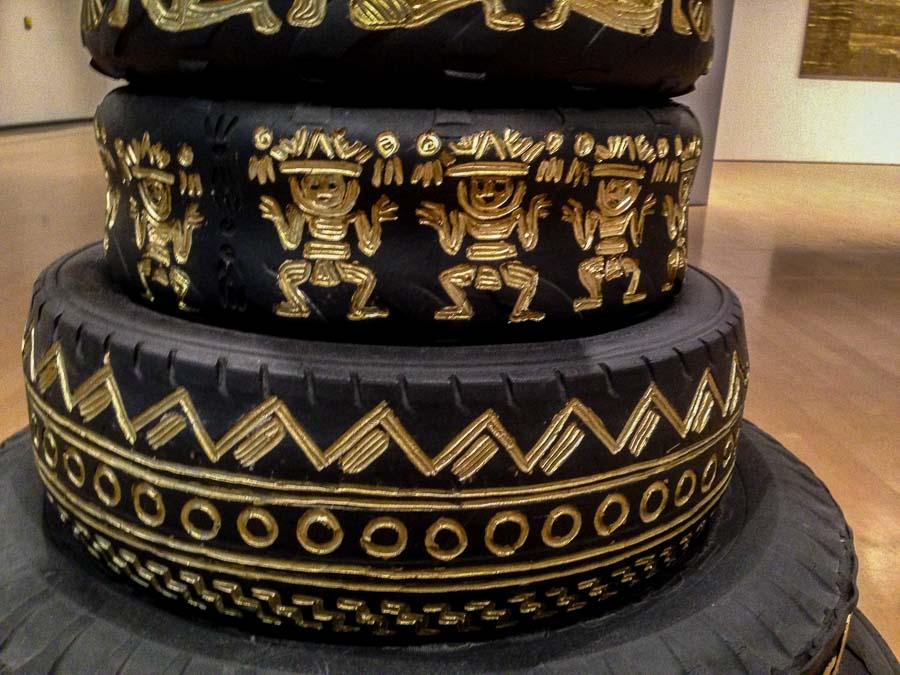 I was intrigued by the use of materials and the beauty they created using an item that has historically populated landfills worldwide. The ingenuity and creativity of Bestsabé Romero is to be admired.

I recommend a trip to the Phoenix Art Museum if you are visting the Valley of the Sun. They have paintings from nearly every genre of art including the masters. There are numerous galleries that are sure to satisfy almost all guests.

PS – They have one of the best art museum gift shops I have seen and I have seen quite a few!

NOTE – All photographs were taken with an iPhone 5 and represent works by the artists named in the stories. All work is copyrighted by their creator and is presented here strictly for educational and illustrative purposes.