The Alhambra palace and fortress in Granada, Spain is one of those locations that is so monumentally beautiful and interesting that it defies description. Not only is the ancient architecture magnificent, the castle grounds and gardens are also magnificent.

The photograph below was captured looking back at the Alhambra from the Generalife gardens located on the Cerro del Sol (Hill of the Sun). We toured the facility for three hours or more and there remains more I would like to have seen.

Perhaps one day we shall return! 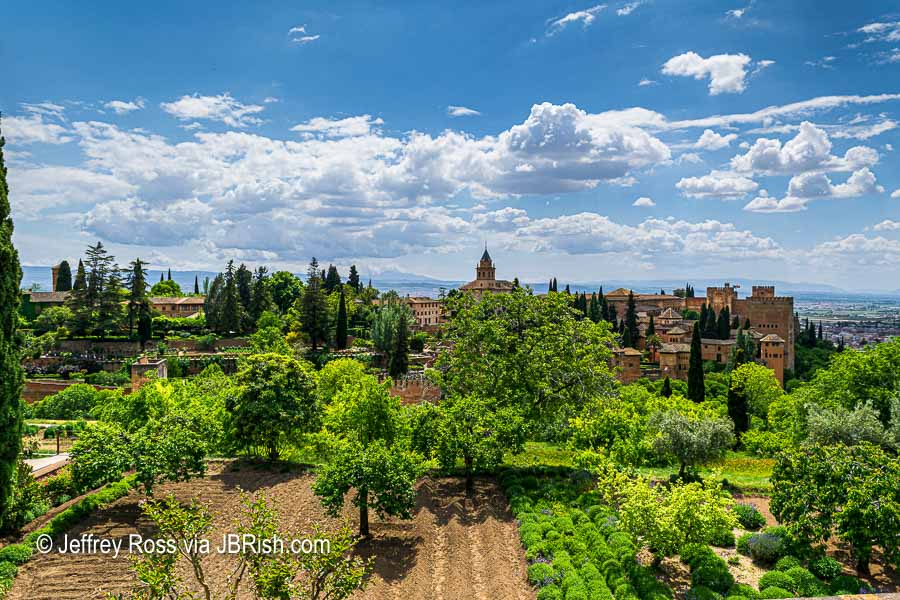 “The Alhambra palace as viewed from the Hill of the Sun”

Photography enthusiasts who visit the Alhambra be warned: You will not be able to stop taking pictures. One scene is prettier and more captivating than the last!

NOTE: A complete pictorial essay of the Alhambra will be published on JBRish.com in the near future!

Last summer my wife and I were part of a group of friends who traveled to Japan together. We stayed three plus days in Tokyo and then boarded a cruise ship for other ports of call in Japan. 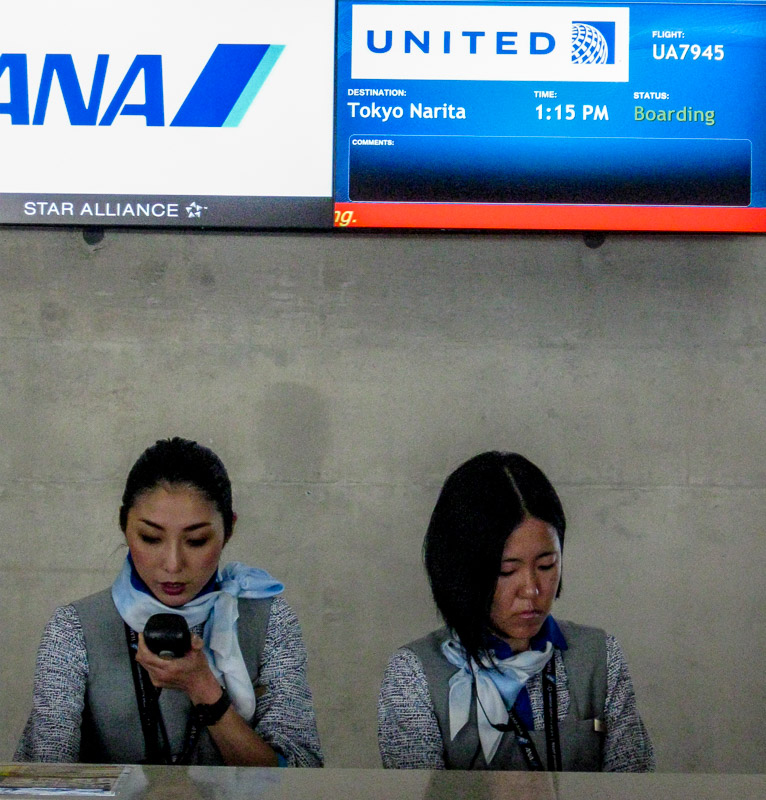 We were excited to be going to a country where the culture is reported to be significantly different than our American way of living and to be sharing this experience and time away with dear friends.

The flight was long, needless to say, and the day after we arrived we were anxious to get an early start. Unfortunately, the weather was a bit dreary. This is the view out of our window at the Keio Plaza Hotel, Tokyo that day. The hotel was a beautiful, modern facility that provided superb service and was very welcoming to westerners. 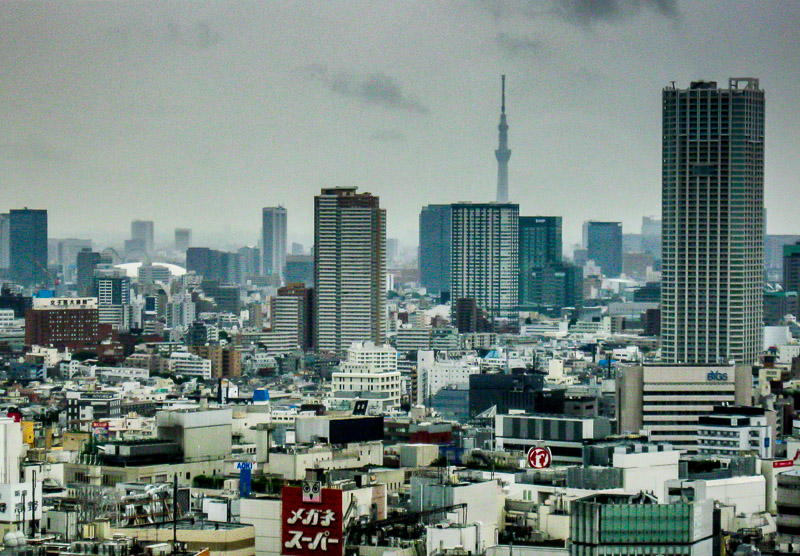 We boarded a bus to begin our adventures. First up was the Meiji Jingu Shrine (Shinto). Because this was the summer, nearly every bus had personal fans to be used by the passengers until the air conditioning “kicked in” or in the event it just wasn’t cool enough.

Like any metropolitan area, there is usually something interesting to see along the way while looking out the window. This modernesque motorcyclist stopped alongside us as we waited for a red light to change. 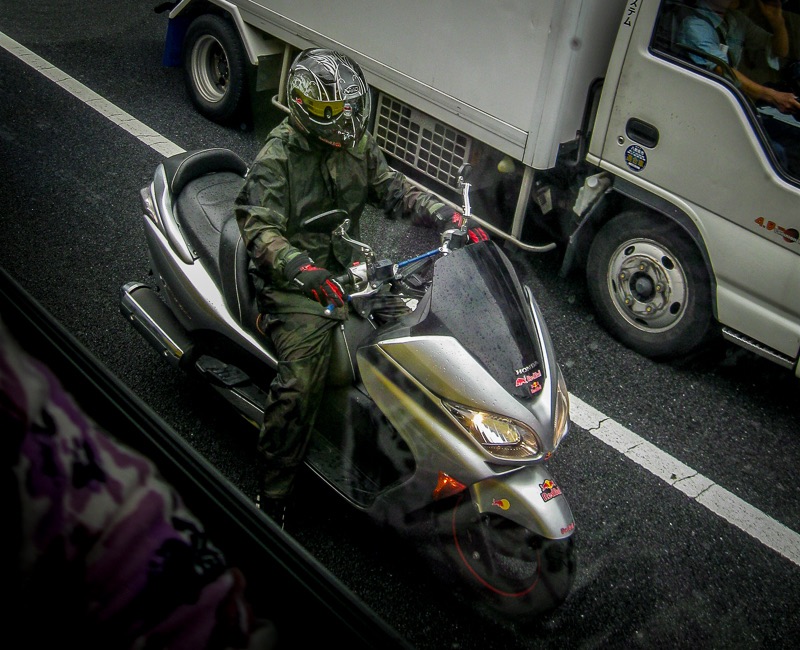 Along the way we passed some interesting and quite different construction barriers. 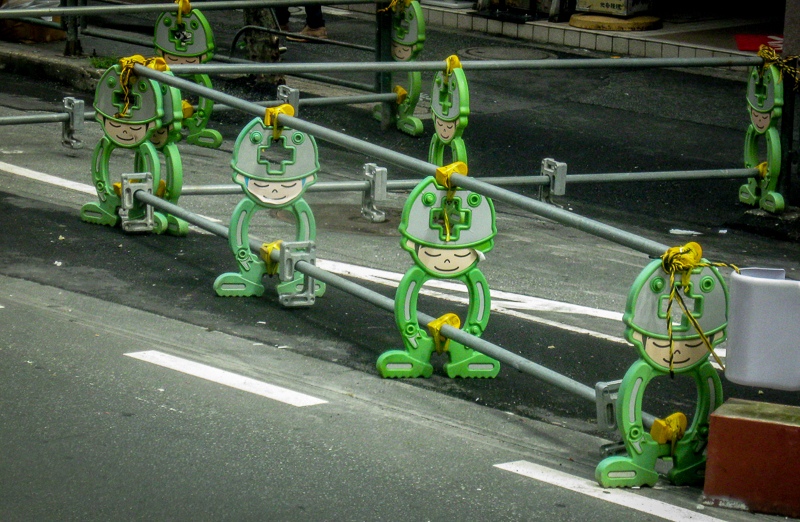 Although the day was just getting started, some on our bus, like this young fellow being comforted by his sister, were a bit tired.

The first impressive sight one sees as they approach the shrine’s park area is the torii (gate) from of an old cypress and which marks the entry to the shrine grounds. Torii are used to signify a sacred area. 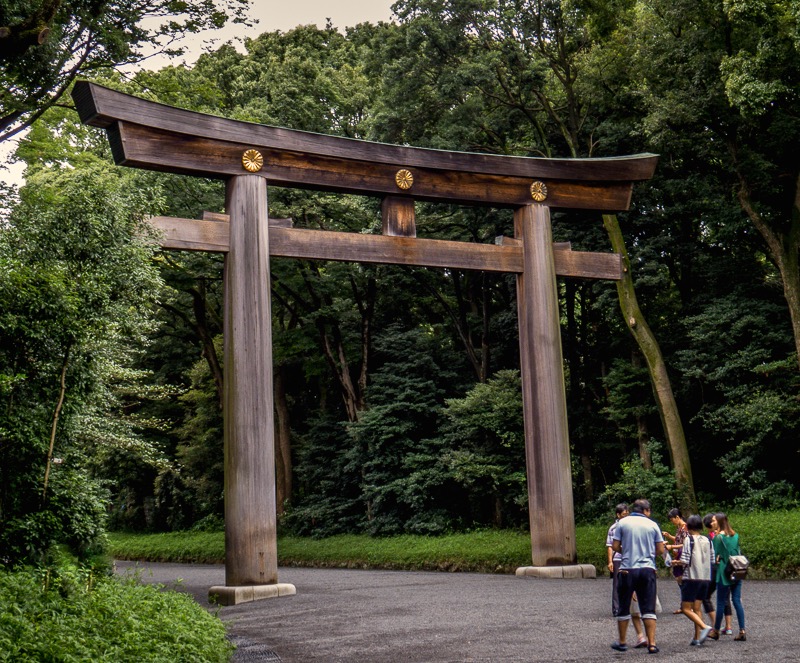 As we walked the pathway toward the main building, the rain became more plentiful, but did not detract from the beauty of the area. 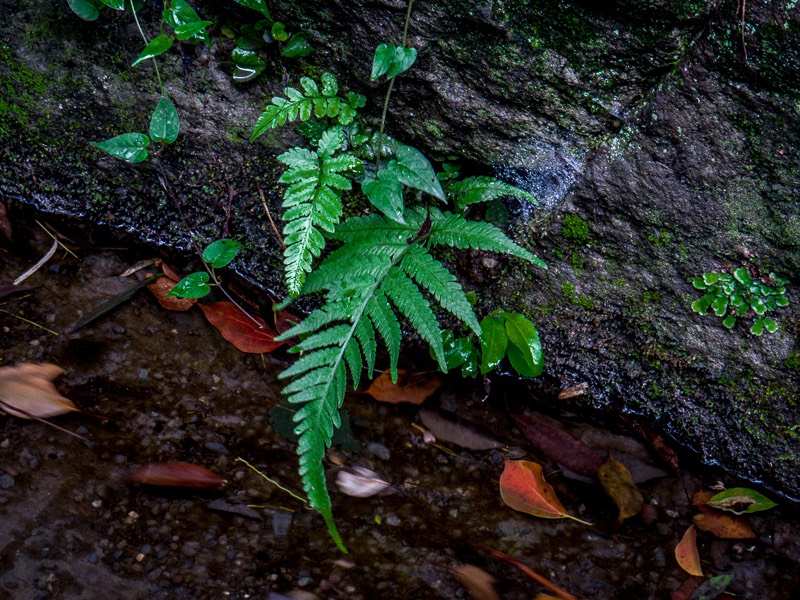 I appreciate the design elements used in various countries like the top of this light post along the path. 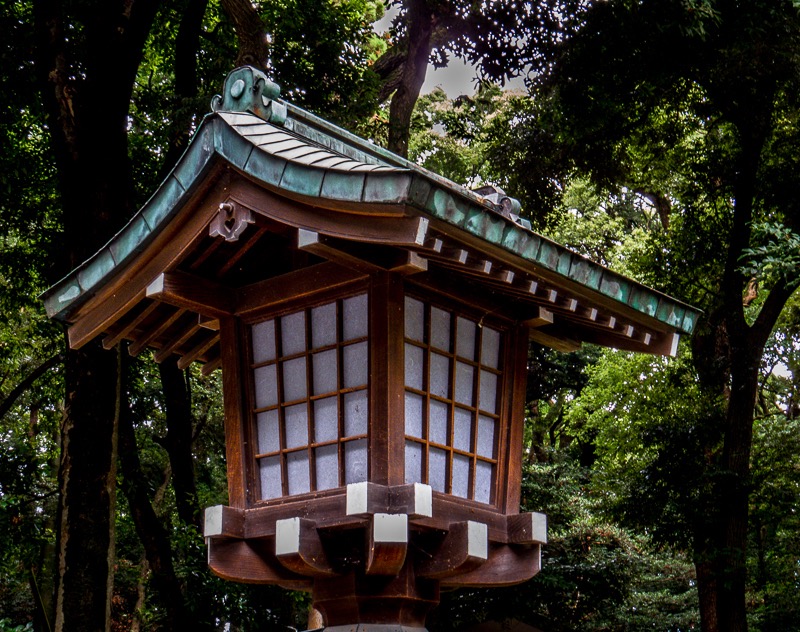 Approaching the main shrine area, visitors encounter colorful, stacked sake barrels. These are donated by the various sake brewers in Japan to honor the deities and underscore the use of sake as part of some of the religious ceremonies. 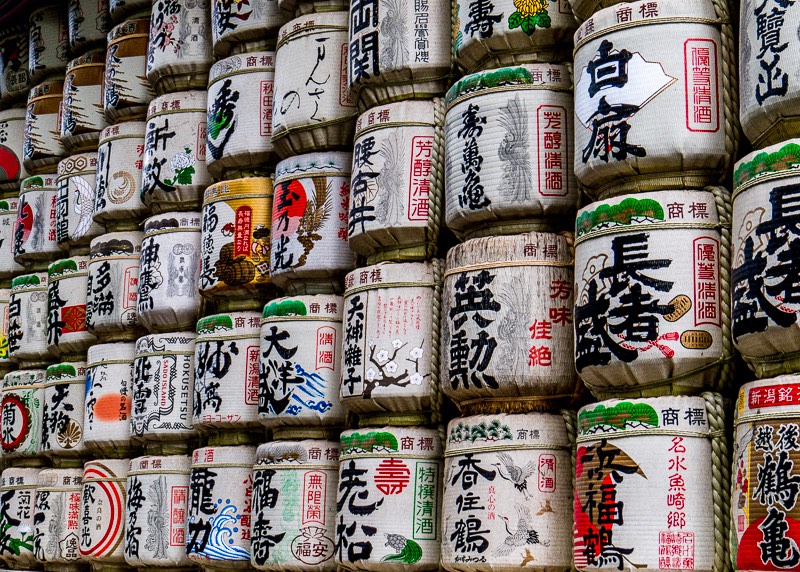 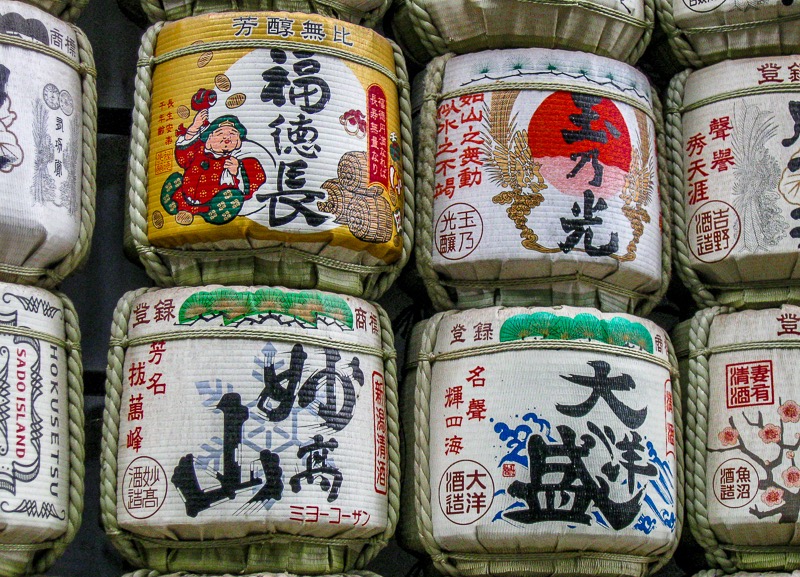 Across from the array of sake barrels is an impressive line up of wine barrels. Emperor Meiji was interested in embracing some aspects of western culture such as enjoying wine with his food. The wineries of Bourgogne, France have gifted barrels of wine to the shrine in the spirit of promoting world peace and friendship. 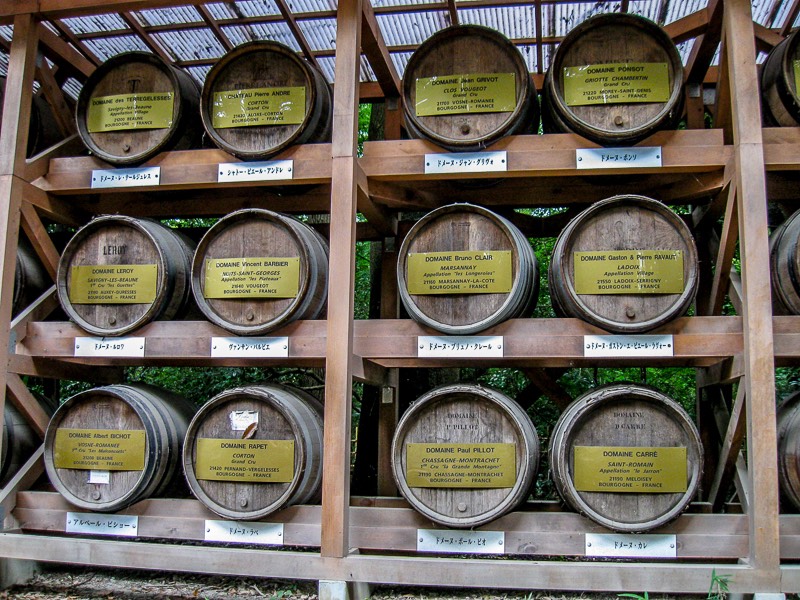 There are several large trees in the courtyard as one approaches the main shrine entryway. These two trees have a rope strung across them with paper cutouts hanging from the rope. 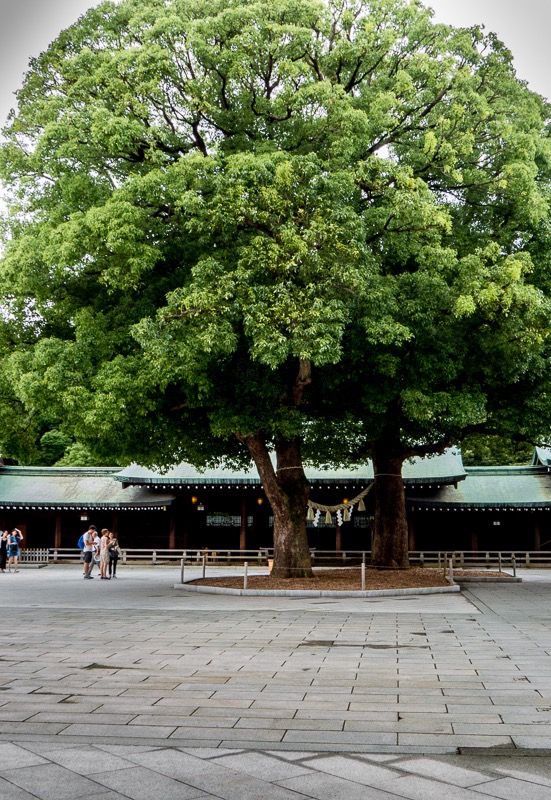 Shimenawa rope is used for ritual purification in the Shinto religion and is often decorated with zig-zagged shaped paper (Shide) resembling lightning bolts. These elements mark a sacred place. 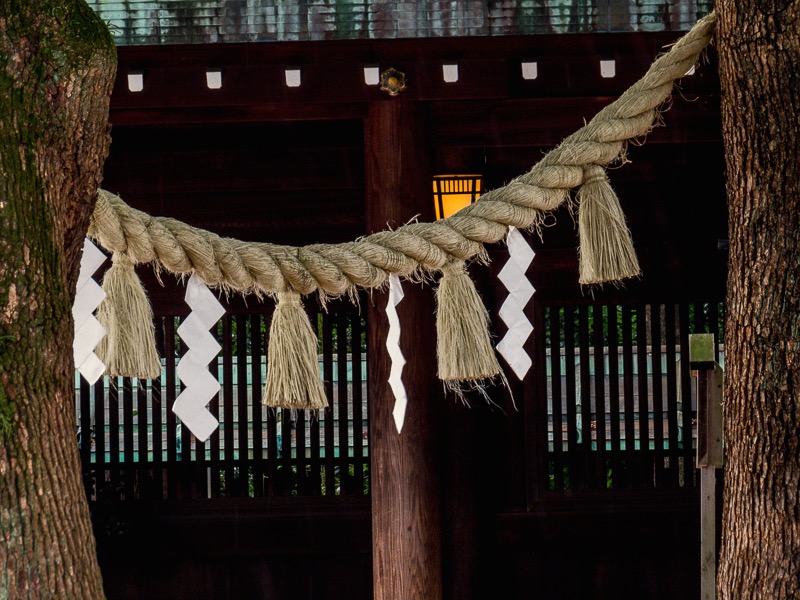 In the courtyard visitors can purchase ema which are wooden placards containing wishes or prayers of those who visit or worship at the shrine. These need not be too serious and some may contain messages asking for forgiveness from a loved one, etc. 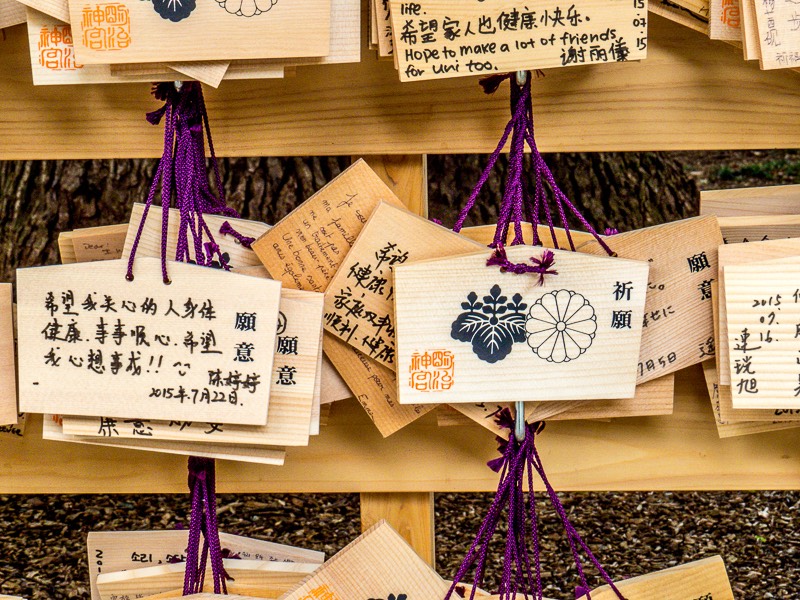 Notice how many of the placards are shaped in the form of a house with a slanted roof. 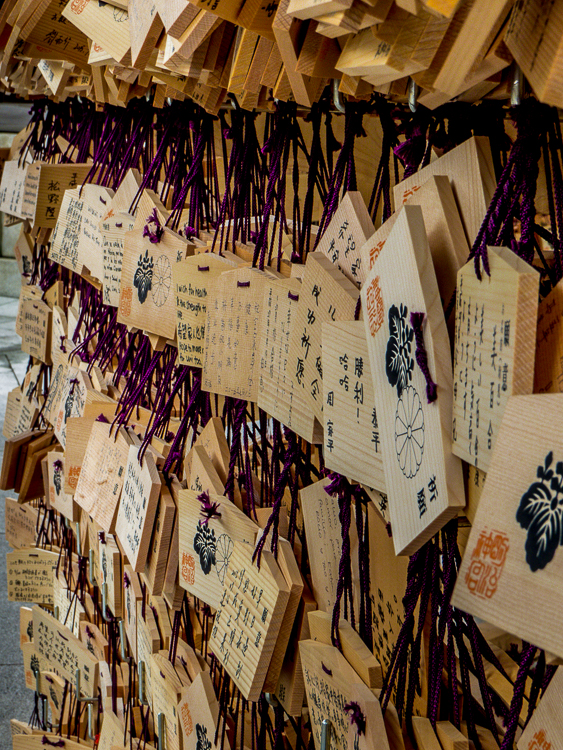 Another torii at the entrance to the Meiji Shrine complex. 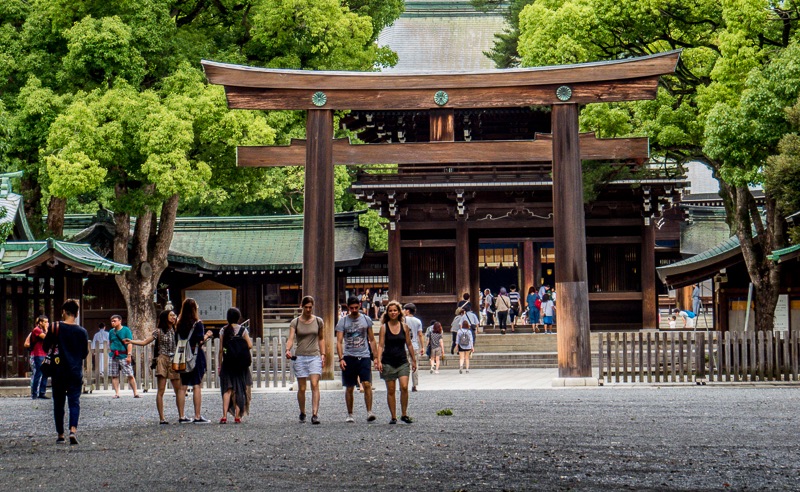 The main building of the Meiji Shrine 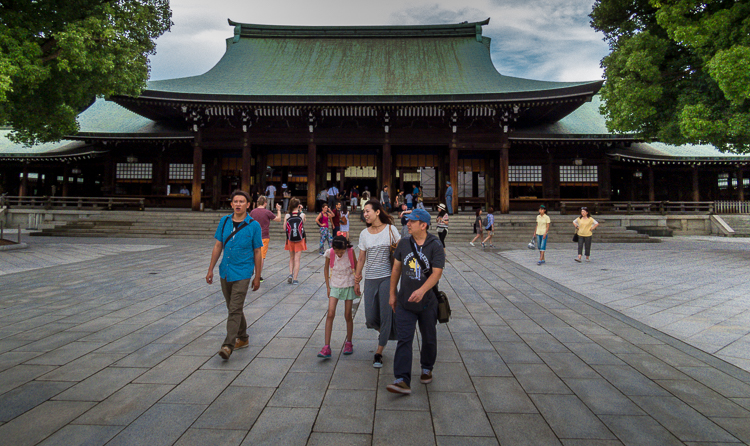 Our guide explained that this wooden post has many small nicks on it, which show as black marks, caused by coins being tossed at it during some of the ceremonies held at the shrine. 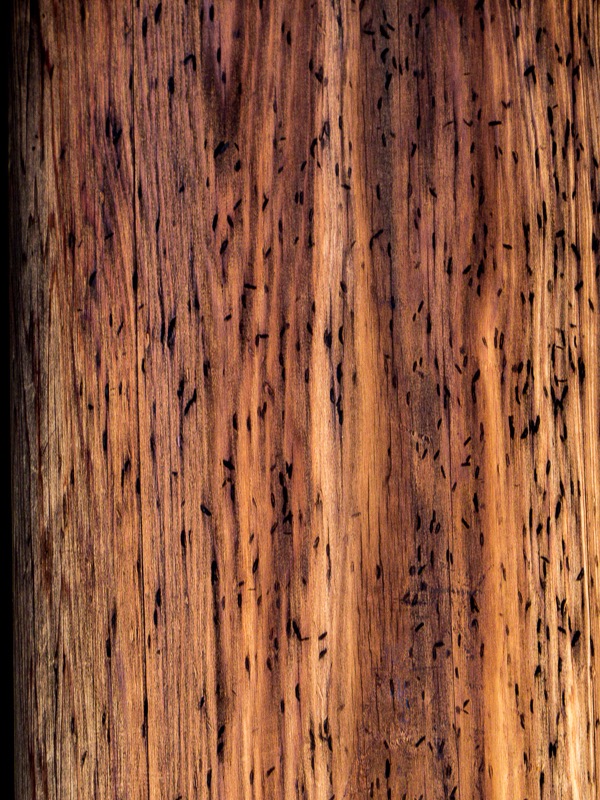 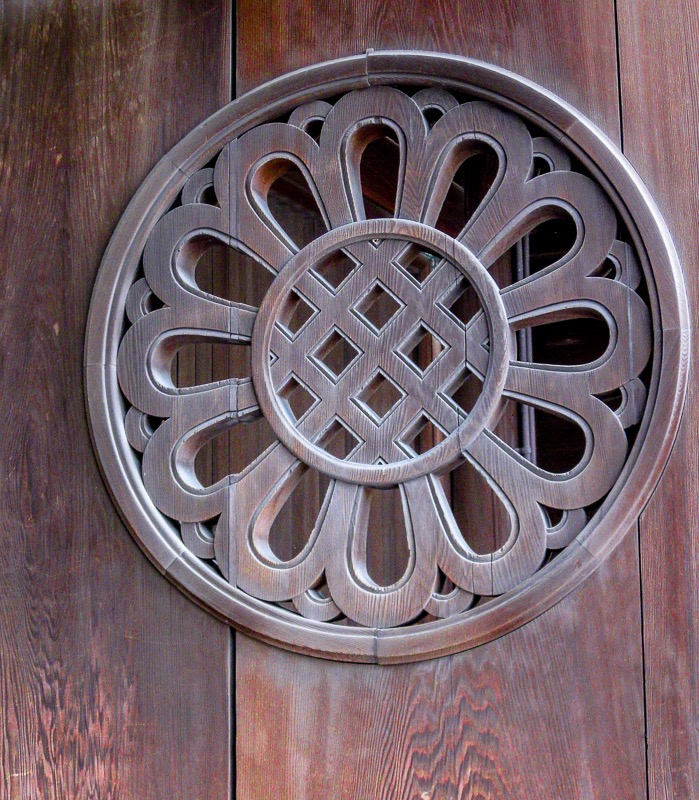 More interesting design elements:
Above – A carved medallion that adorned this wooden door.
Below – An ornately designed light on the outside of the main hall. 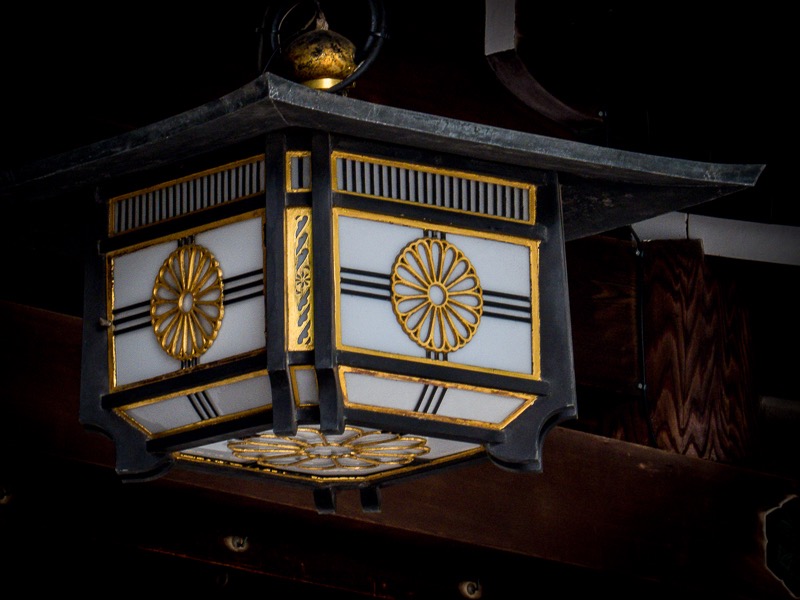 Many of the attractions and places of interest in Japan draw large numbers of people and thus each docent needs a way to enable visitors to keep an eye on them or to locate them in these crowded areas. The guides usually have a telescoping rod or long pole to which they attach a personal token. As we returned to the parking lot, our guide was raising her stuffed bear aloft for us to see. 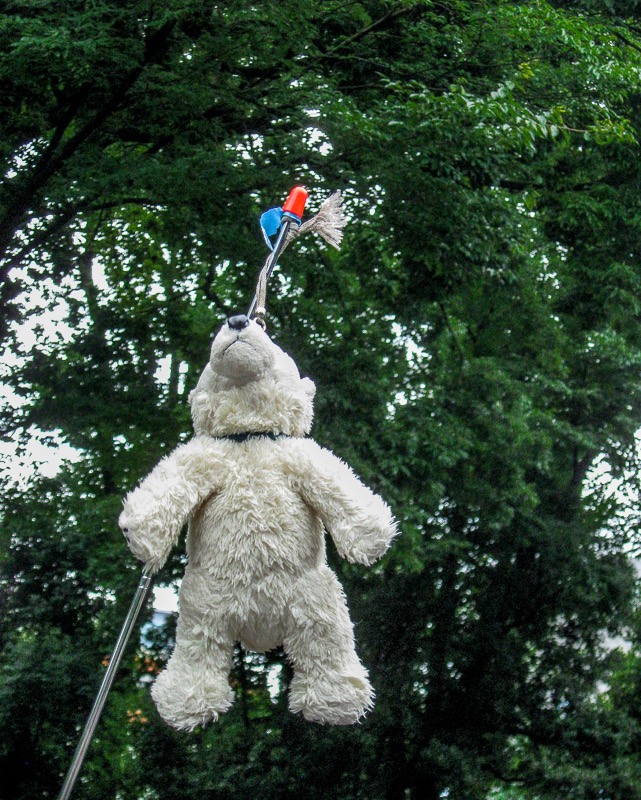 We boarded the bus and headed for our next adventure this day, The Imperial Palace East Garden. Watch for more posts about our trip to Japan!

Photographers Note: Because of the rain this day, most of these pictures were taken with my very old Canon PowerShot A590 IS, 8 MP point and shoot; mainly jpegs.