Although living in the Sonoran Desert does set some limits on what can and can not be grown at certain times of the year, it really isn’t much different than other areas of the United States such as New England. The nice thing about living in the North Phoenix, AZ area is that we have two planting seasons and by mid-to-late October, the second season is well under way.

What this generally means is that those plants that have worked hard all summer long, put up with exhausting heat and yet continued to put on a floral show are now very “tired” and ready to be replaced. The vinca below is one such candidate. 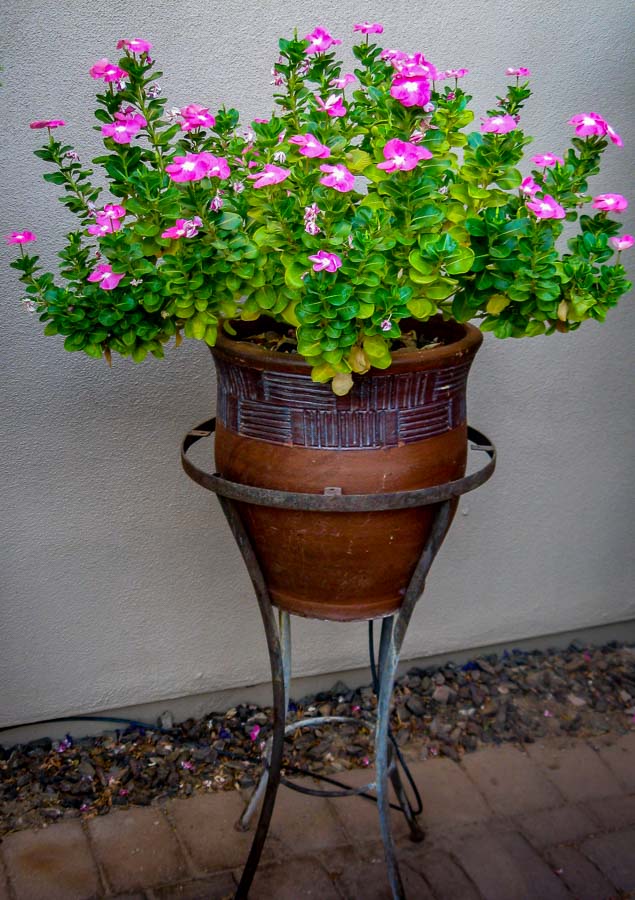 To help with this process, we use a cement mixing bin/tub or two to contain debris and corral the planting mix. As you will see, we also enlist a variety of pails and other containers. 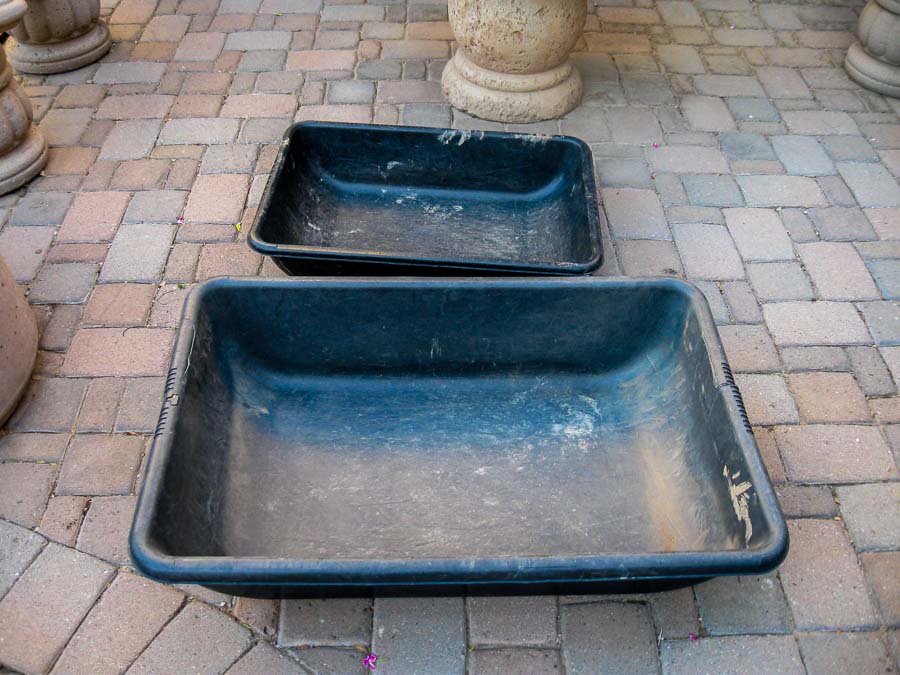 A larger sized bin can be used to help merge the ingredients for the replenished soil mixture although on this day we used a wheelbarrow. 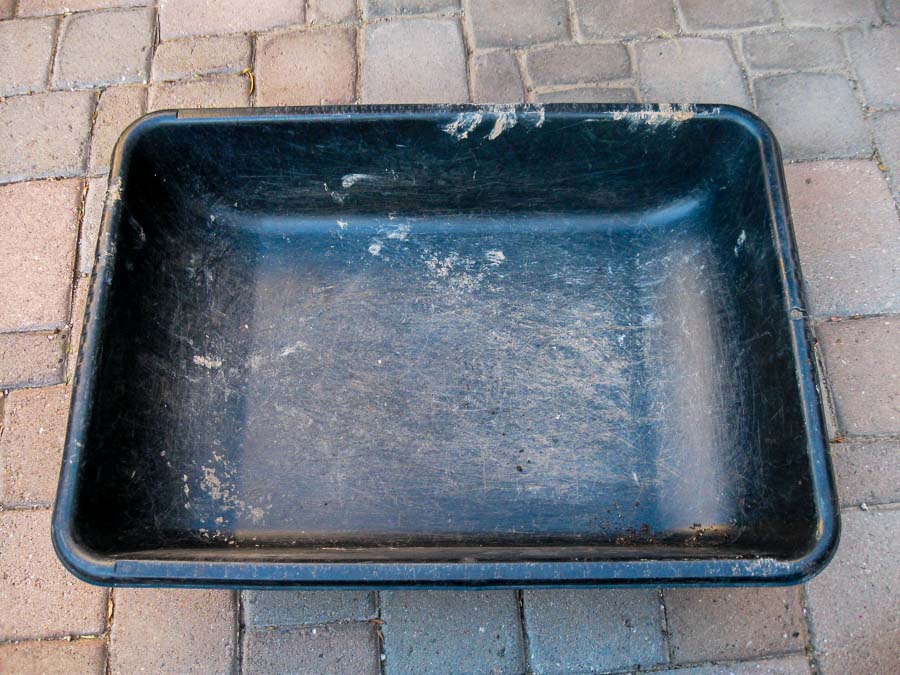 We use rocks as mulch because they are plentiful and help to keep the animals away from the roots. We have some pesky visitors that like to scale our walls and gates and dig in our garden and planters.

The pot below is shown after the plant and rocks were removed. 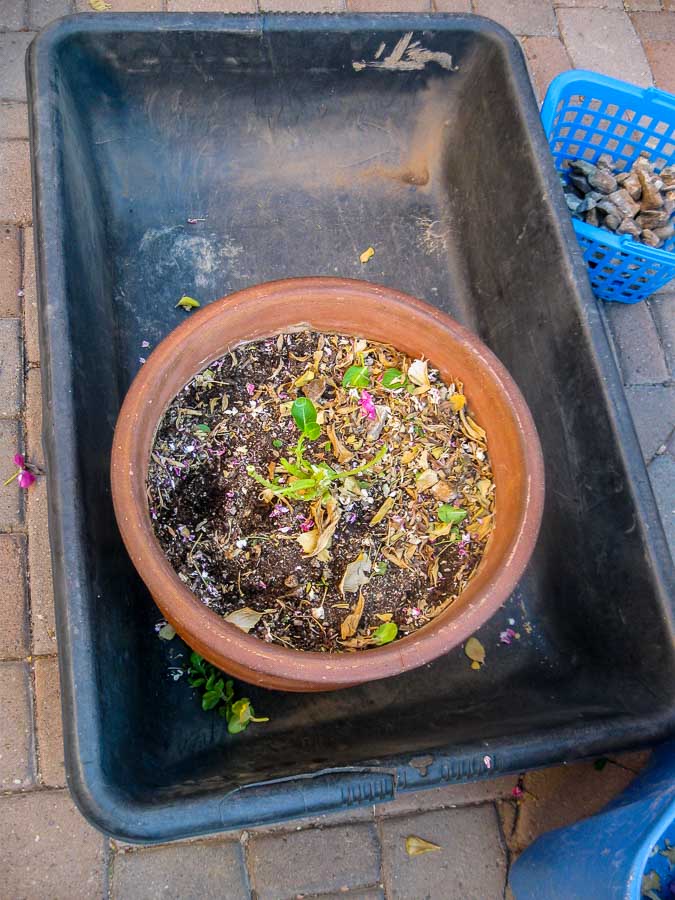 As you can see, there was a substantial root ball. 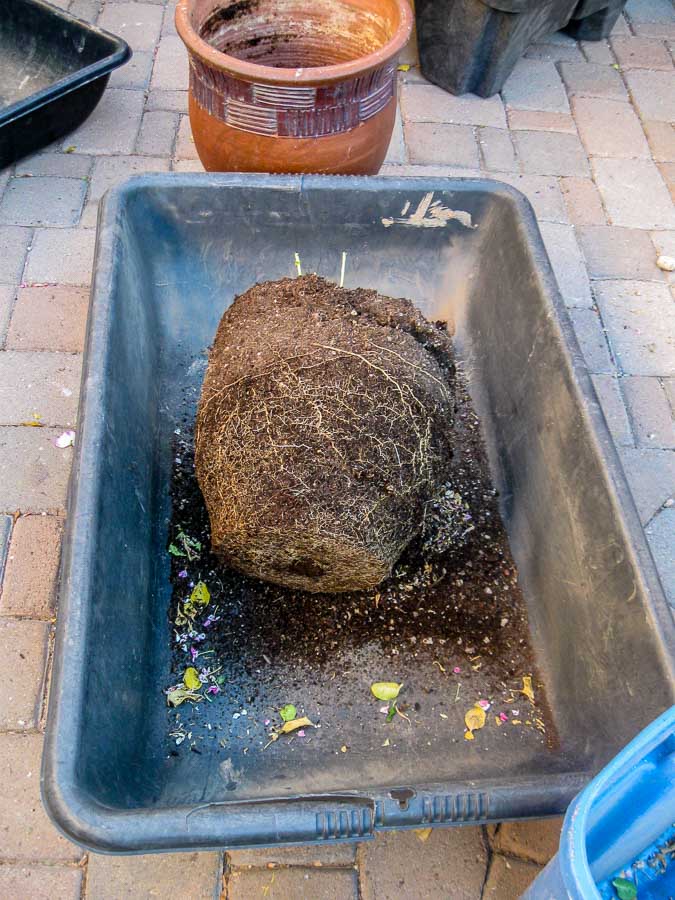 We use a shovel and/or trowel to break up the dirt and remove as much plant debris (roots, leaves, etc.) as possible. We then place the dirt in a sunny spot to dry out for a few days making sure to turn it several times during the process.

Notice the crack near the bottom handle of the bin. After several years in the heat and sun the hard plastic does have a tendency to develop cracks here and there. Our experience is that even with heavy use, they last quite a few seasons if care is exercised. 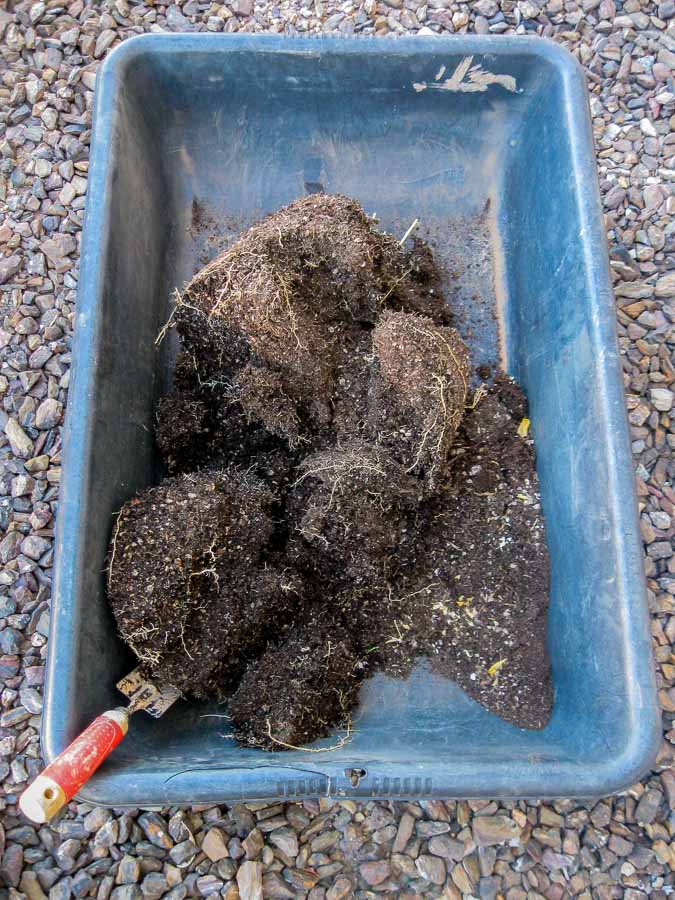 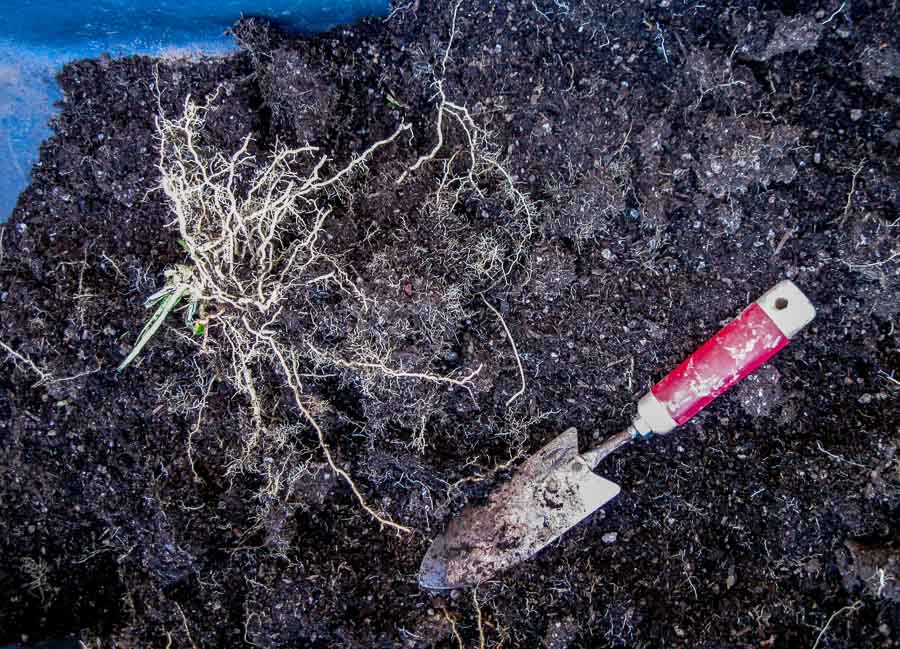 The older, dried planting mix will later be incorporated into a new planting blend using fresh “dirt” and fertilizer.

With the vinca removed, we replanted an ivy geranium in the same pot. 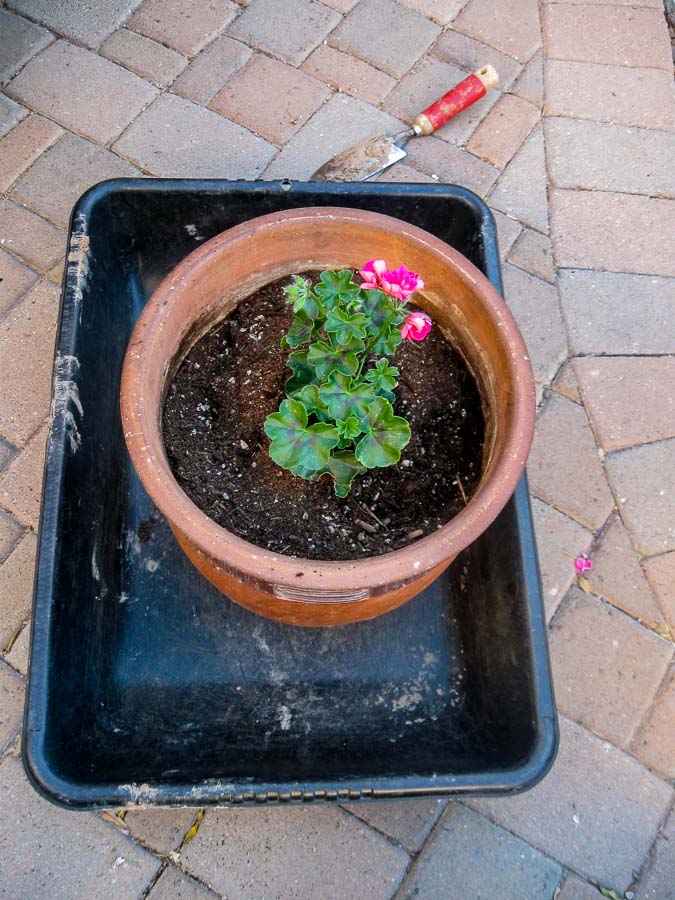 Before placing the rest of the dirt and mulch in the planter, we position it on its elevated platform. We have several raised pot holders because our courtyard did not always have a gate and the Javelinas were fond of marauding among our posies! BTW the pail is set up to catch water should the irrigation system engage while we are in the transplanting process. 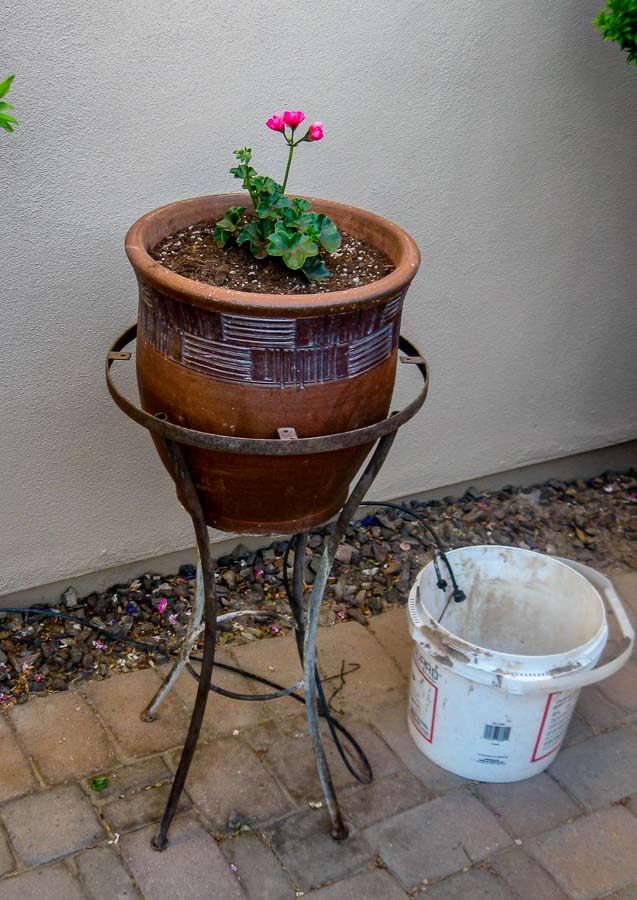 Once the dirt is filled to the desire level, the emitters for the irrigation system are secured in place. I like to have one emitter on either side to the root ball to distribute the water as evenly as possible without getting carried away. 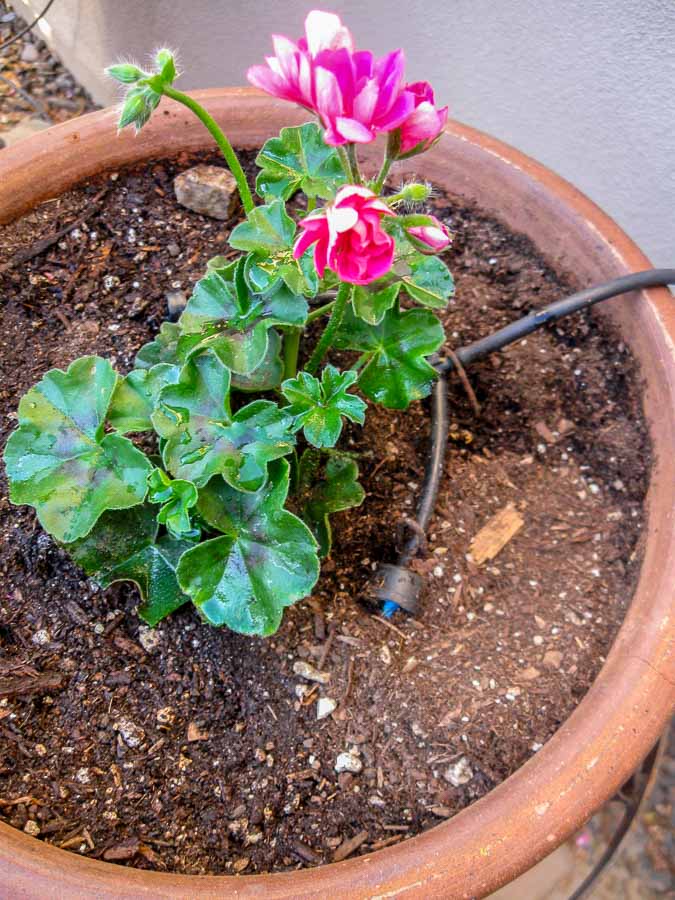 With the emitters secured, the plant is watered in, the rock mulch applied and a bit more water added to make sure the mix is moist throughout. 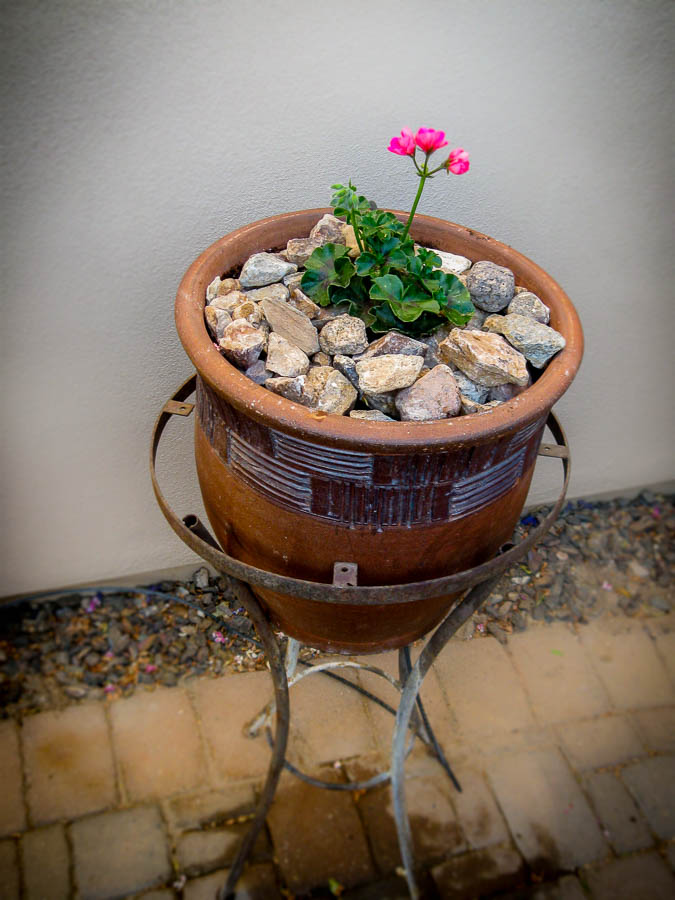 Since this plant is in a location that receives reflected heat which is still intense in the October afternoon, we cover it with a lattice plastic bin which reduces some of the negative effects of the hot sun. After two or three days this will be removed during an evening and the plant will be better acclimated. The large rock is to keep the cover from blowing in the wind. 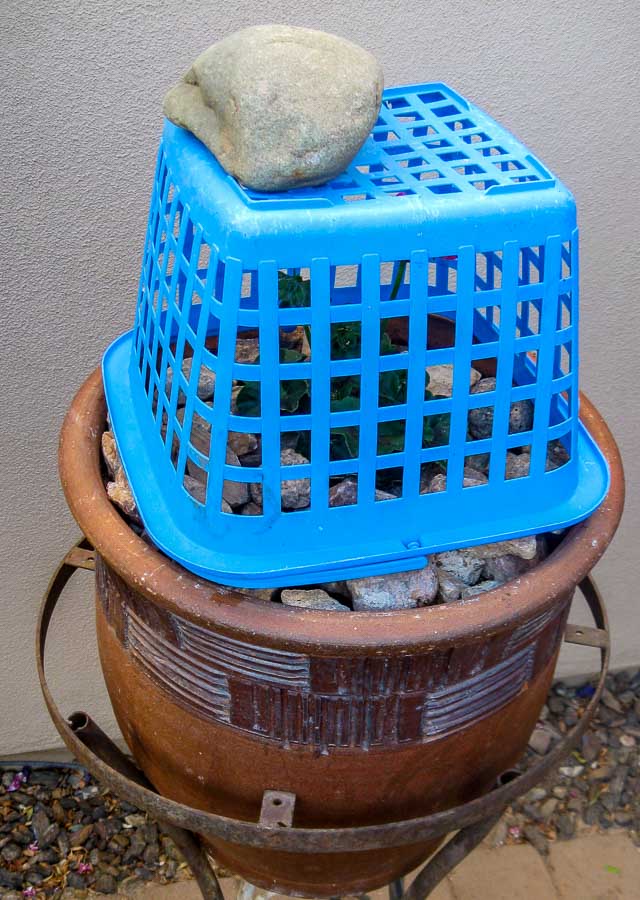 Having the bins and other accessories really helps to make the job of transplanting without too much of a mess relatively easy.

For your reference, Home Depot has a large mixing tub for under $15: