There is a pungent smell in the air this spring in our Sonoran garden and surrounding neighborhoods. It isn’t really a bad smell, but it cannot be described as a totally pleasant one either. When we first discovered this fragrance several weeks ago, we couldn’t figure out the source, but over the ensuing time period we discovered its origin.

You can see the culprit in the picture below… 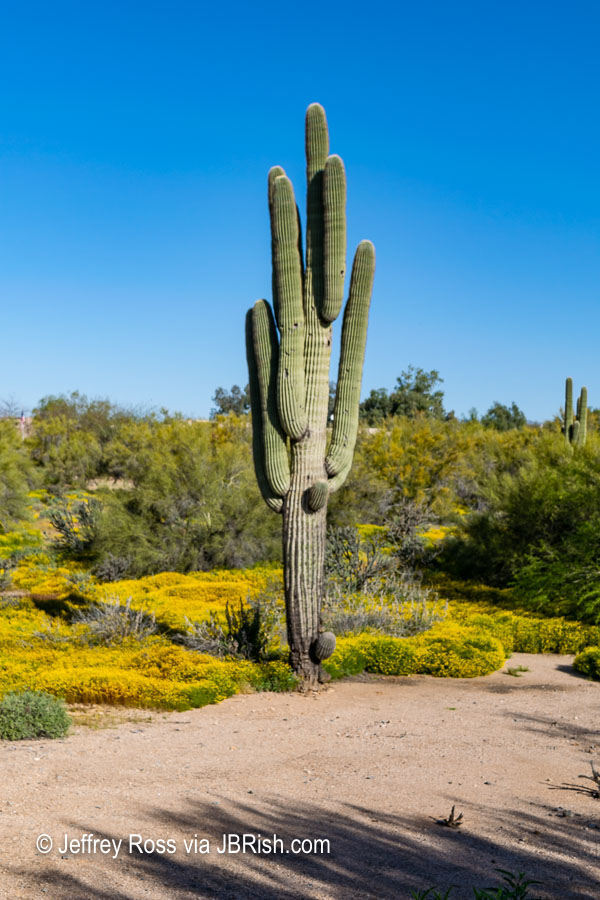 and here it is again. 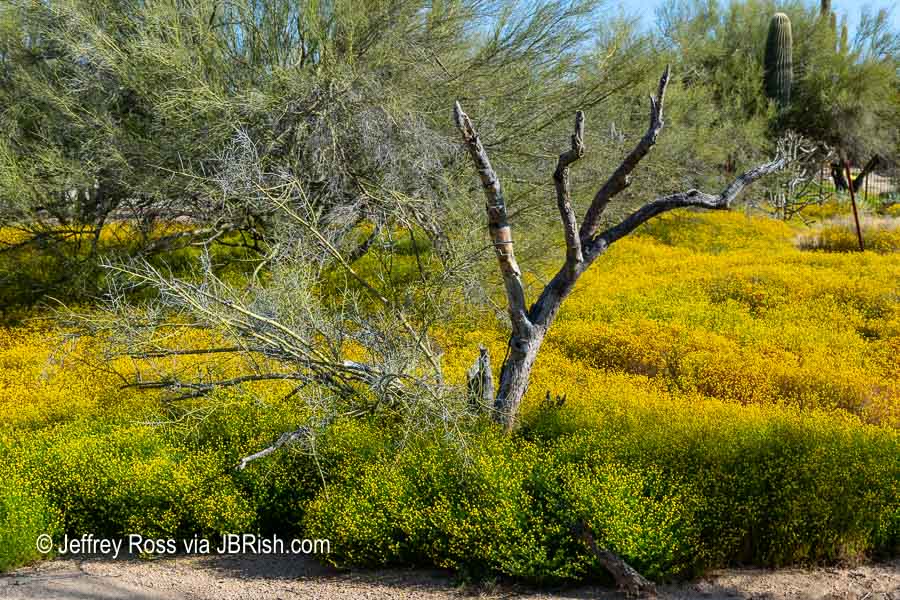 This yellow plant is called Globe chamomile (Oncosiphon piluliferum). While seeds can be bought for Globe chamomile, I am sure most gardeners consider it a weed.

Because of the frequent and substantial winter rains, these yellow weeds are pervasive throughout open areas in the Phoenix/Scottsdale, Arizona corridor.

You can see how thick it grows. It can be pulled out by the handful. 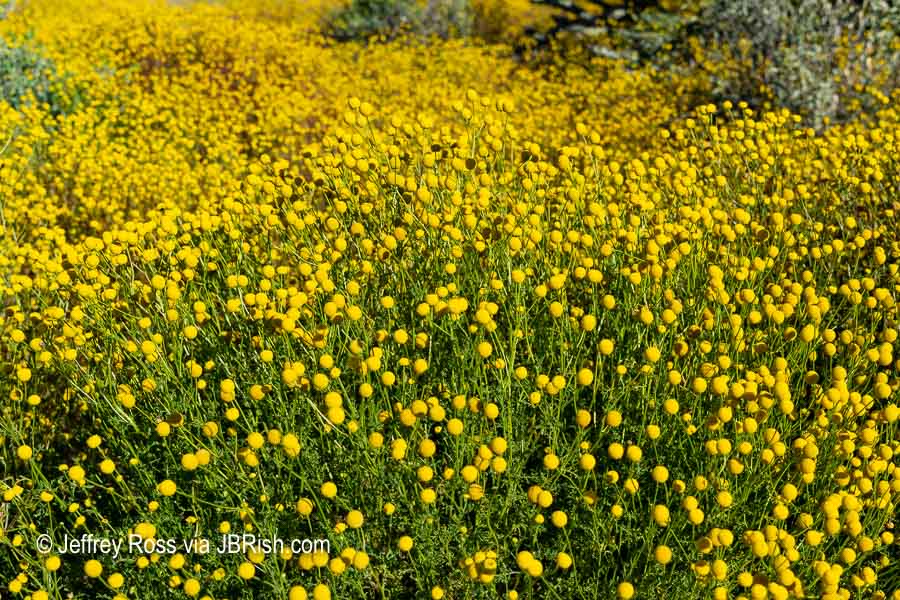 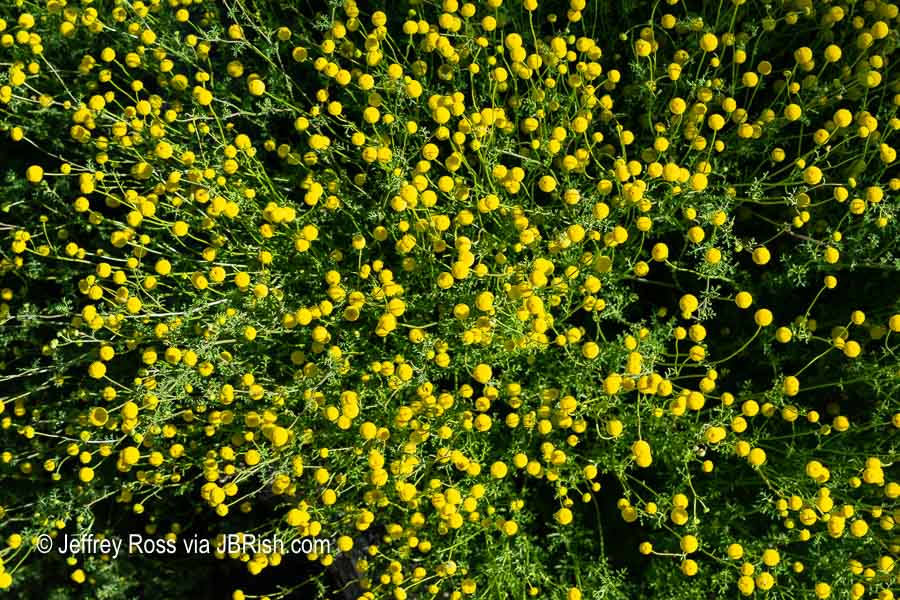 Globe chamomile is a South African native and it has found its way to various regions of the United States and other countries.

It has been in bloom for weeks, but the drier and warmer spring weather is now causing some die off. Notice the brownish stems (below). The flowers are still quite vibrant and fragrant, but they are definitely on the wane. 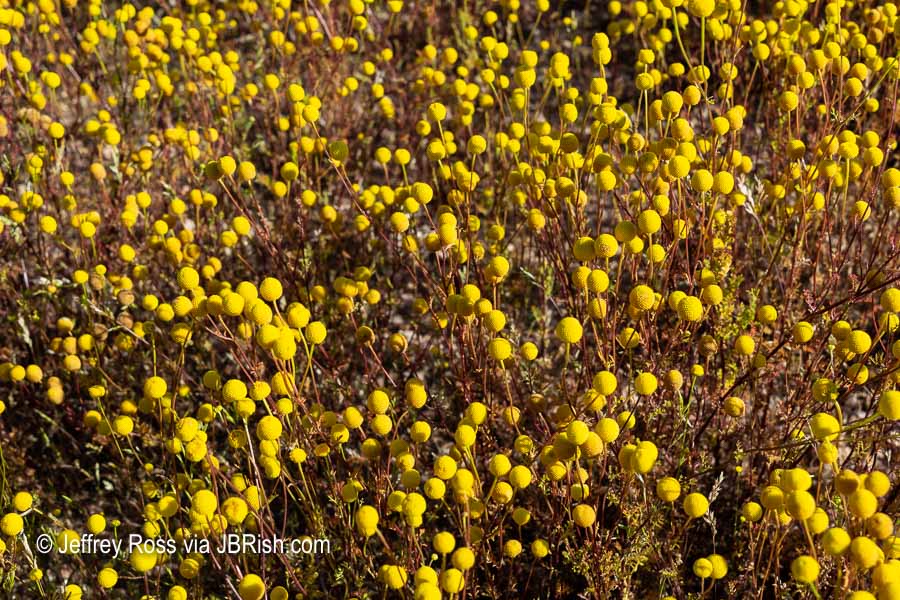 It has been blamed by many in the area for their severe outbreak of allergy symptoms. Melanie Dunlap, a Naturopathic practicioner, writes about here experience in this article titled Goddess of Allergies

You can read more about Globe chamomile HERE

If you missed Part 1 of our narrative of the hike along the West Fork of the Oak Creek earlier in November, you can see it here:

We continued to hike along the West Fork of the Oak Creek and through the surrounding canyon trying to stay as dry as we could at each of the 13 (26 both ways) stream crossings. At first I thought this was a small iceberg or snow, but it turned out to be a foam pile created by the churning water hitting the neighboring rocks. 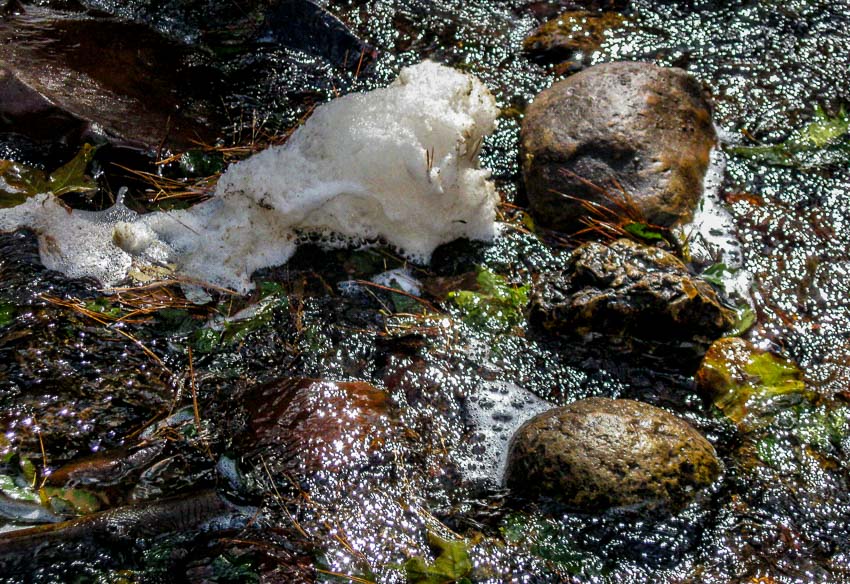 I am always intrigued by “walking trees,” that is those trees that gained a foothold on a pile of debris or dirt which has since washed away leaving a good portion of the roots exposed. In some wooded areas, the term walking tree is used to refer to this phenomenon. 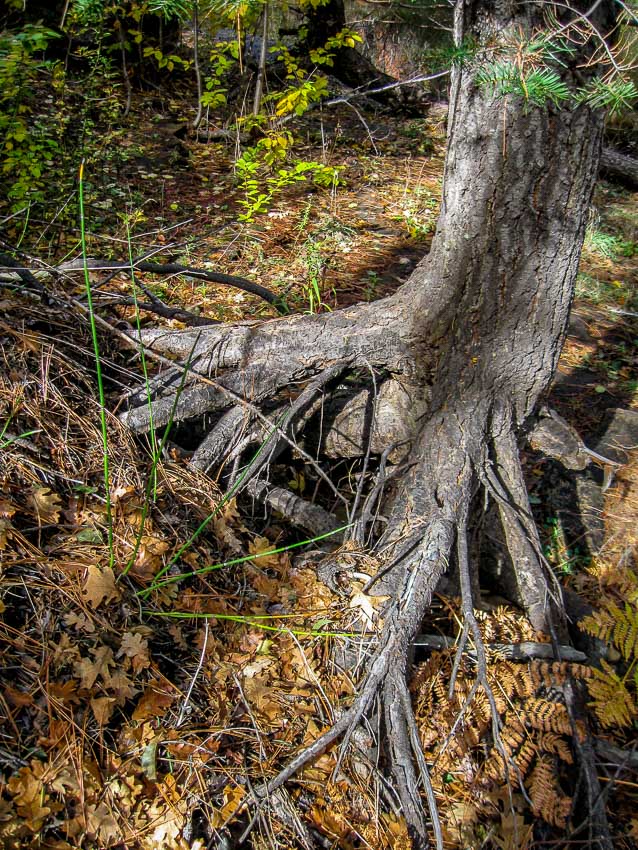 Some of the trees assert themselves by consuming nearby rocks in their extended growth. There are several rocks being visibly smothered in the bark and roots of the tree. 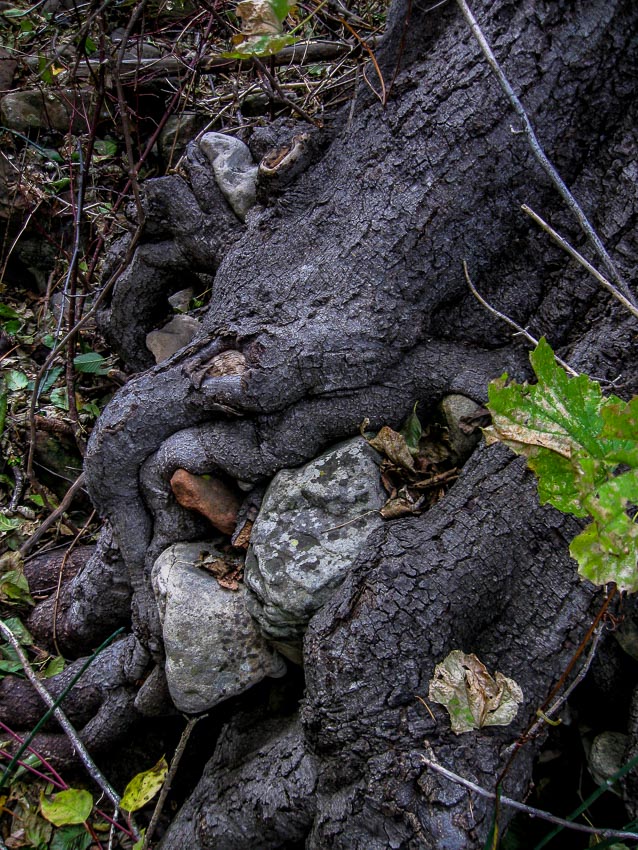 Perhaps my favorite photo of the day personifies the beauty of the canyon along the west fork. The golden hour was approaching with the beautiful light allowing the red rock walls to reveal their splendor. The reflection in the wider portion of the stream adds to the drama. 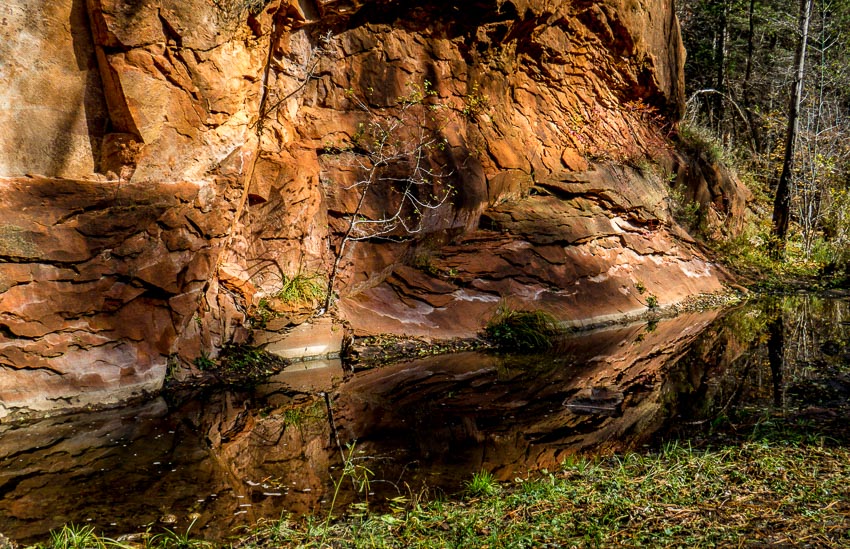 Even the less magnificent views along the stream were pretty in this Fall light. 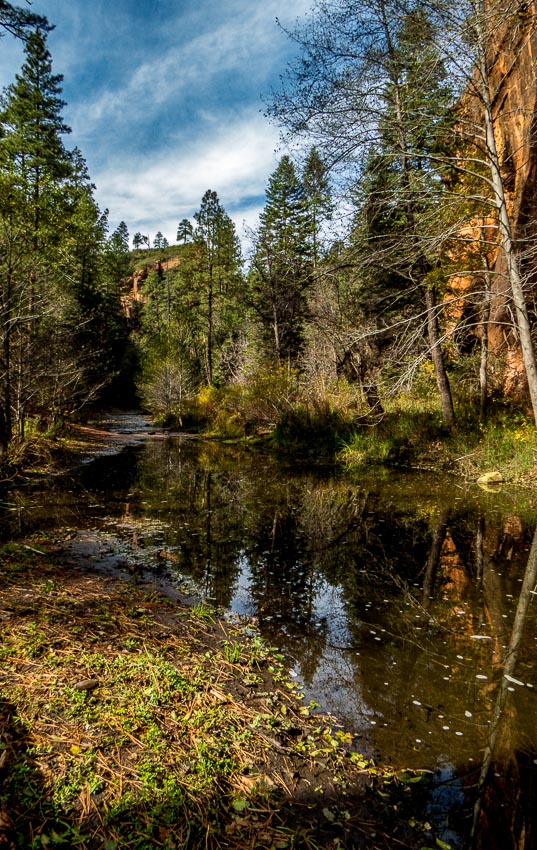 At places the water was very placid and “easier” to cross than at others where it was running apace. 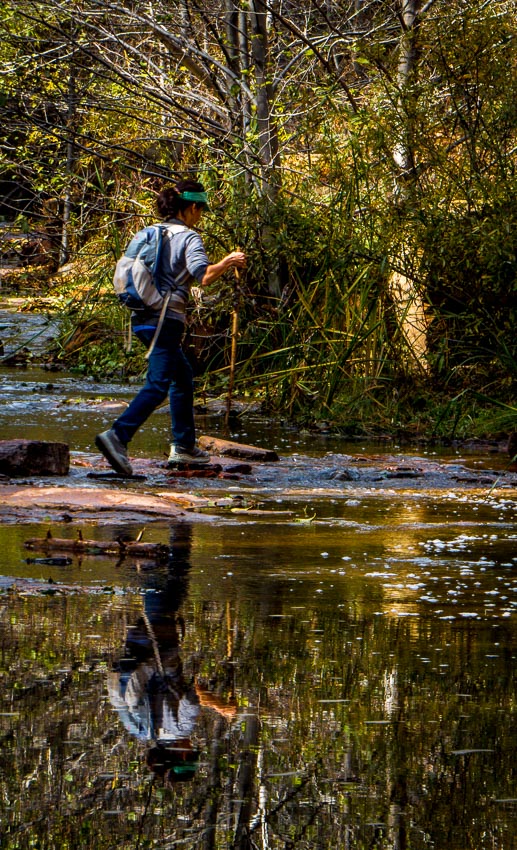 We approached this broad area of the canyon where the trees, sky and red-and-white rock cliffs join forces to create a symphony of color. 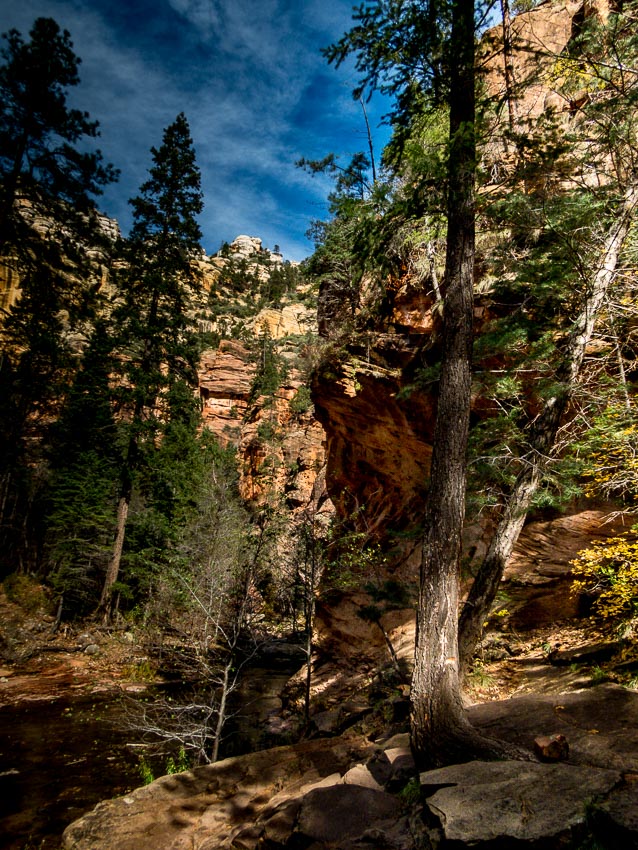 A rather large, cawing crow stopped by to voice his approval as well. 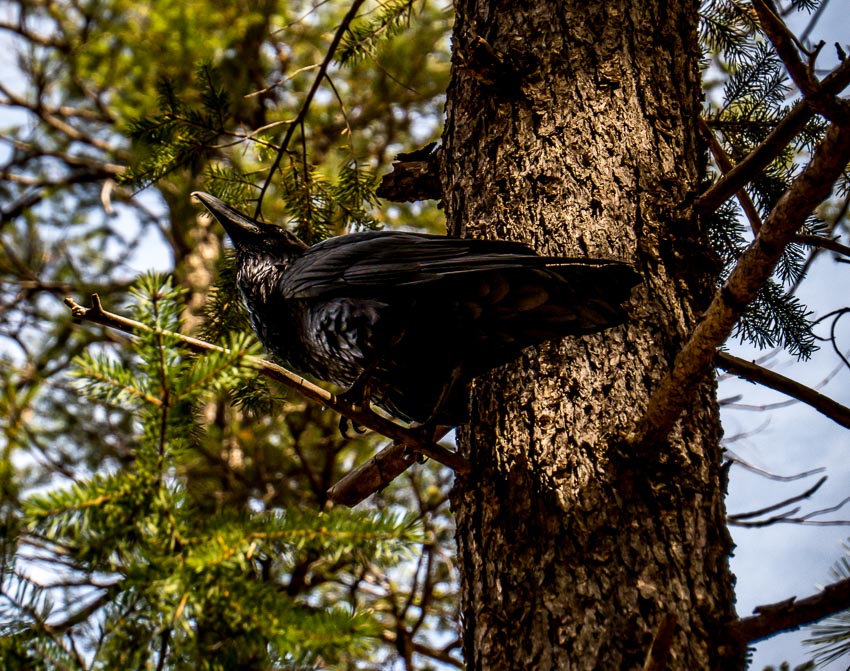 There was not enough light to capture all of the fantastic colors in this area, but I hope you can appreciate the contrast and texture of nature’s palette. 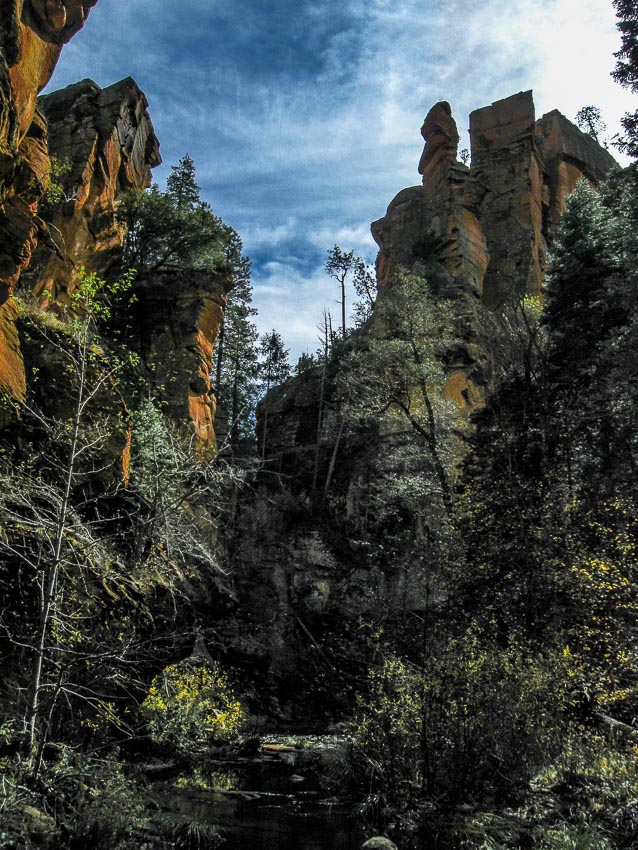 The tree below had gained a foothold along the riverbank despite the crowd of rock slabs. It was a very pretty green against the red rock which is not captured at its best in the photo, but I think you can appreciate it as described. It is sad that this tree has a struggle ahead as it tries to continue to grow in an area that is not well-suited. Nature does not play favorites. 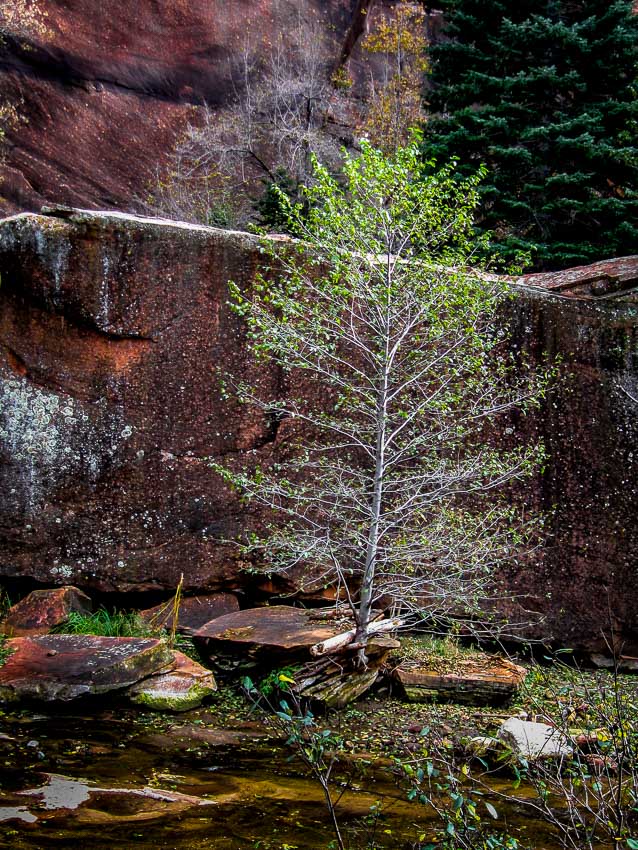 As we continued our wandering, we were somewhat surprised to find this very green area of horsetail grass. There was an abundance of flora that was shedding its summer color to adorn its fall visage throughout the canyon and this intense green created a unique juxtaposition at this time of the year. 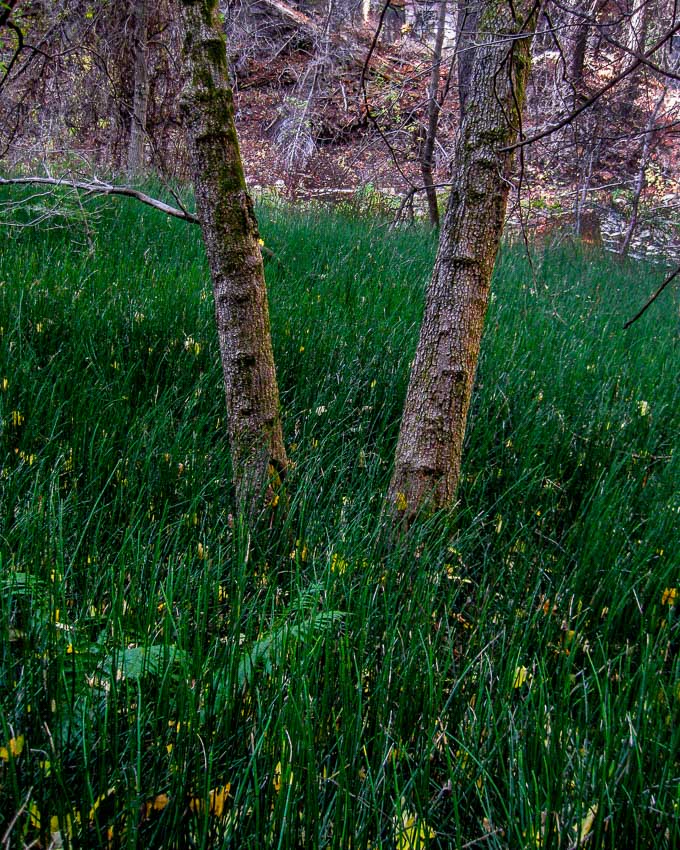 Horsetail grass has interesting segments that create addiitonal interest in its use as an ornamental. Note, however, that it can become invasive and it is recommended that horsetail grass and its relatives be planted in manageable areas or pots. 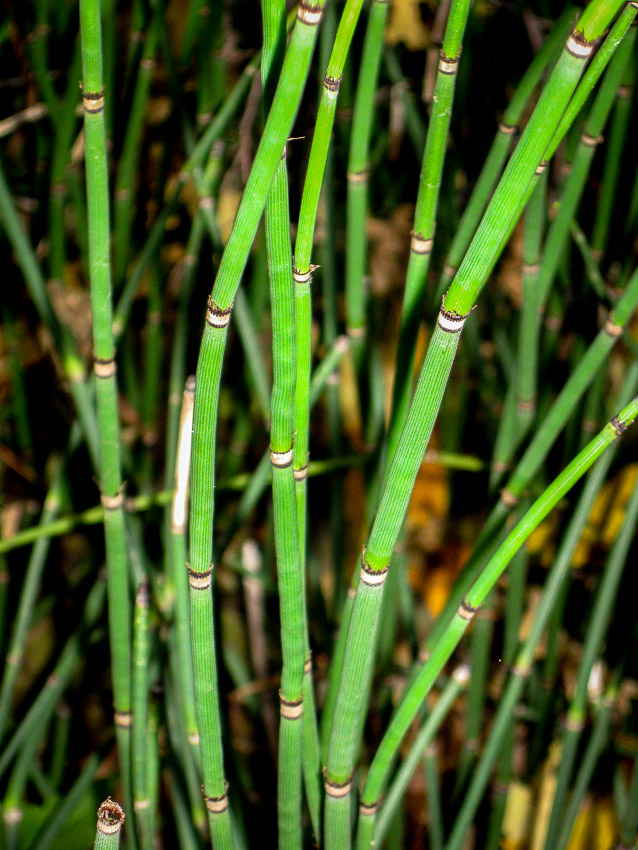 As I end this installment of our narrative, which will conclude next time in part 3, I would be remiss not to include on last picture of the beautiful red rock cliffs towering above the Oak Creek. 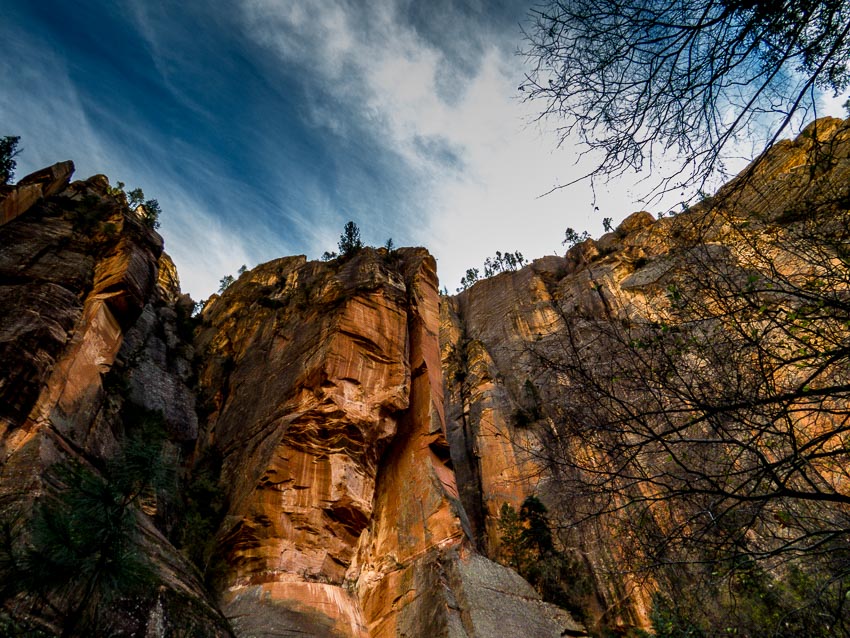