The last city visited during our trip to Spain was Toledo. Some have suggested that the expression Holy Toledo refers to this Spanish city which is the seat of the Cardinal Archbishop of Spain. During our stop in Toledo, we noticed numerous churches which might lend support to the Holy Toledo reference as well.*

Let’s start at the beginning. The first views we had of this beautiful city were from a nearby hillside. 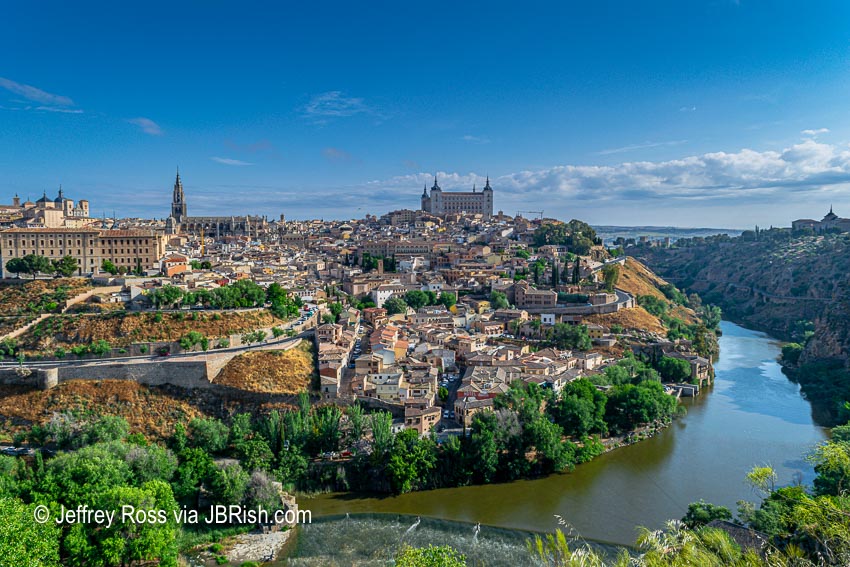 We arrived on a Sunday and many of the holy shrines were closed to tourists, but we were able to appreciate the grand architecture of this urban center from afar. 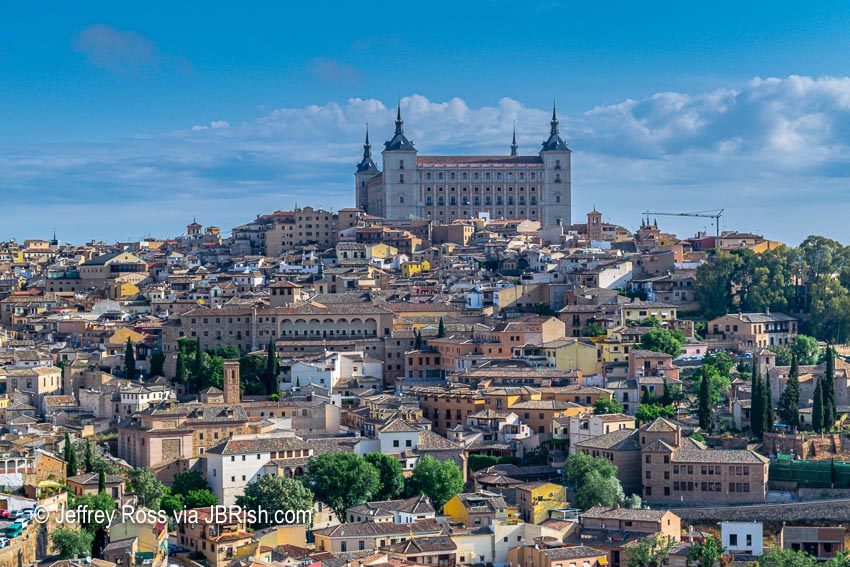 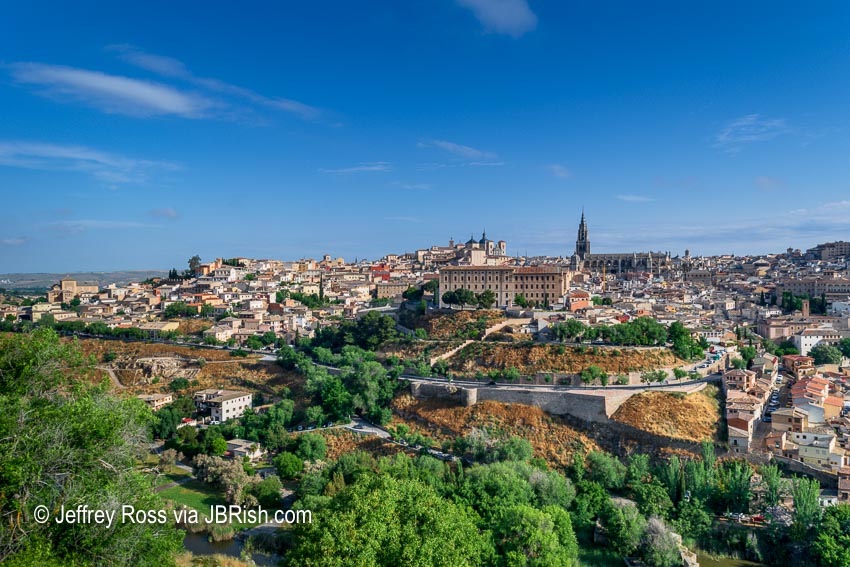 At the turn of the current century, the city fathers realized that the historic streets could not handle the overwhelming pedestrian and vehicular traffic. To help alleviate congestion and difficulty of navigating the narrow streets, they constructed a large parking garage at the foot of one of the hills. Understanding that this climb might be difficult for travelers, they decided to build a unique system of six angular escalators. 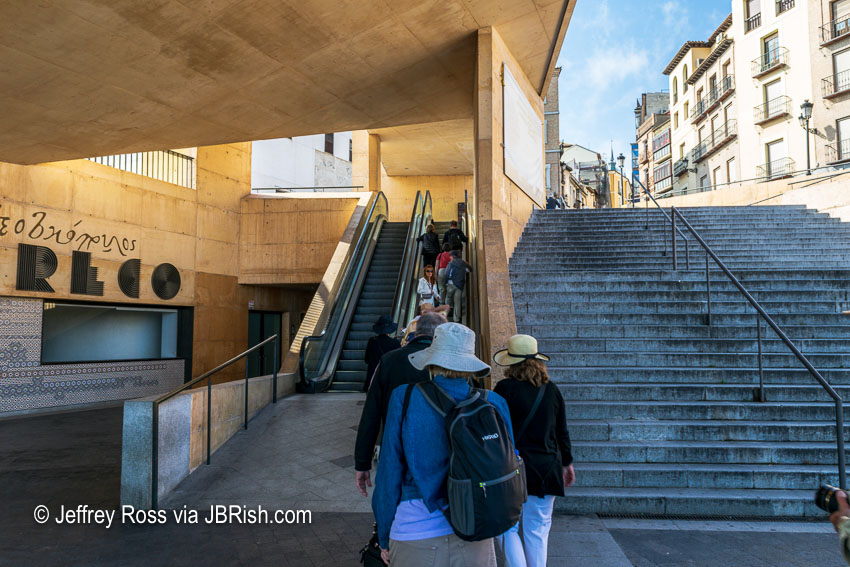 We soon arrived at the Plaza de Zocodover which was city-center for Toledo through most of its history. The town is decorated for tourists with flags and banners festooning the the buildings and hanging across the busy streets. 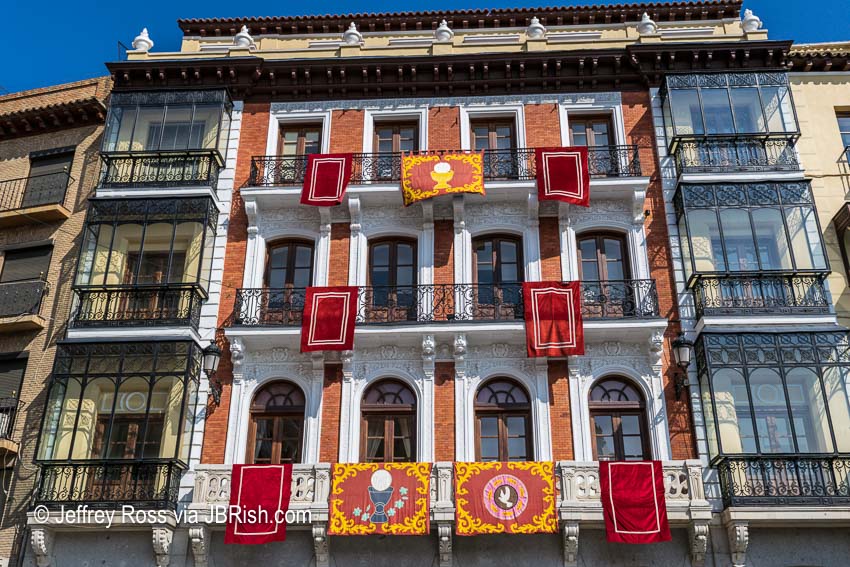 This arcade leading up to the square from below also hosts a statue of Miguel de Cervantes which can be seen in the middle, lower part of the picture. 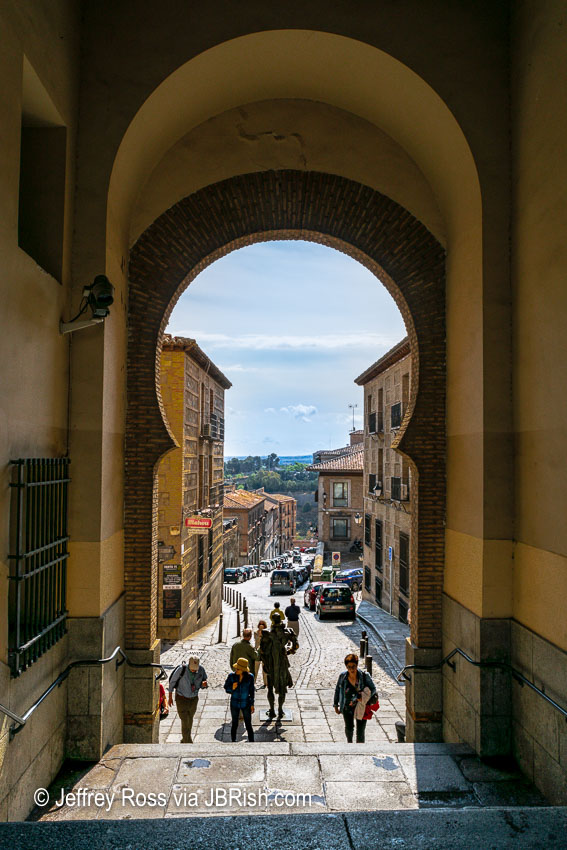 As part of our walking tour, we passed city hall… 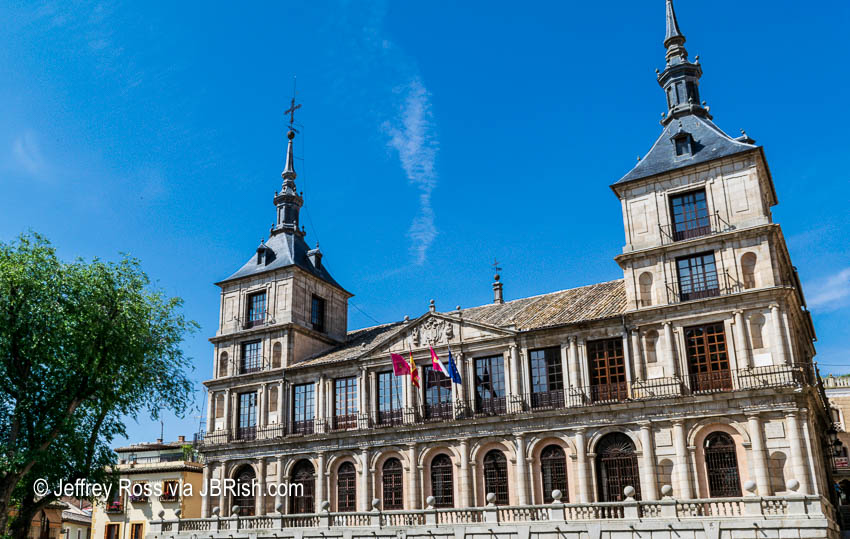 and the historic Cathedral of Toledo. 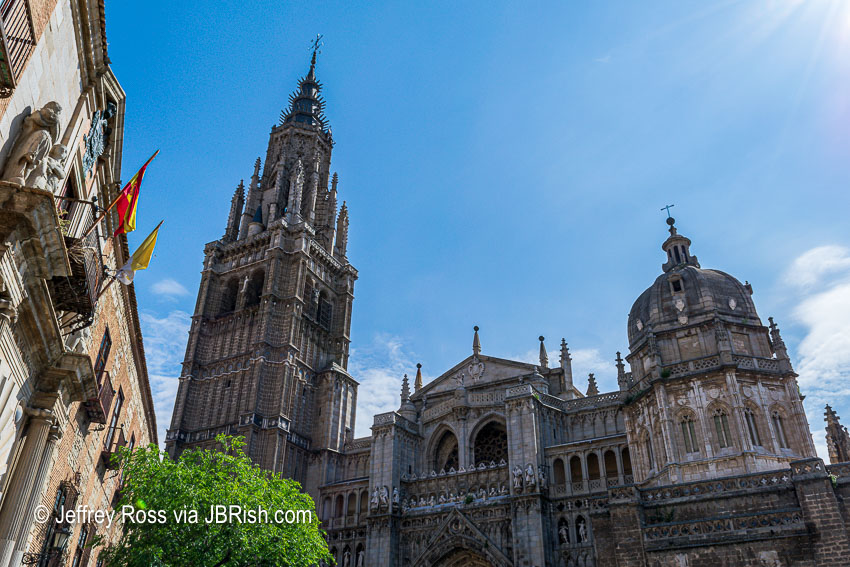 Along the way, we passed a number of colorful residential areas. 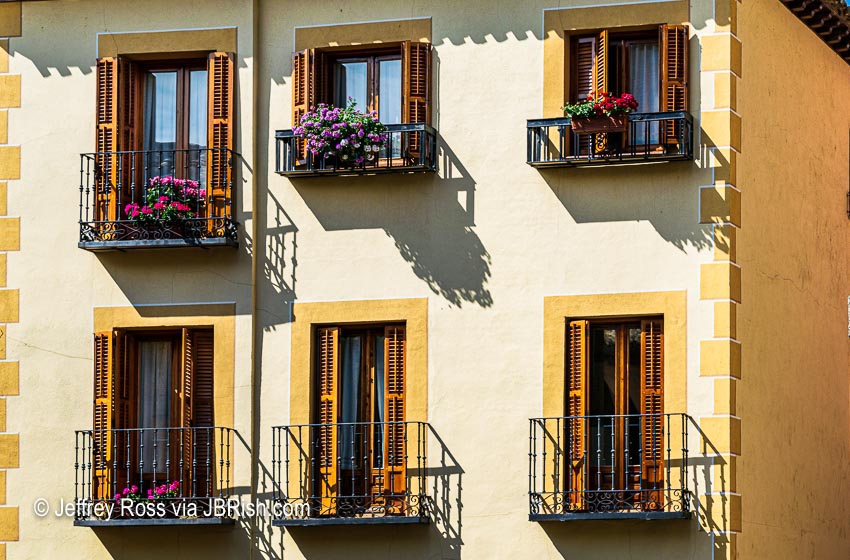 While we visited Toledo on a Sunday when many houses of worship do not allow tourists, one part of the Church of Santo Tomé is available for a very special viewing.

Don Gonzalo Ruíz, the Count of Orgaz, was a church and city benefactor who died in 1323. The famous painter, El Greco, created a large painting symbolizing the burial of the Count of Orgaz which has a religious symbolism associated with it. This painting resides in an anteroom of sorts of the Church of Santo Tomé and is open for visitors.

The line to view the painting was long and entrance was metered so be prepared to wait. No pictures are allowed inside. 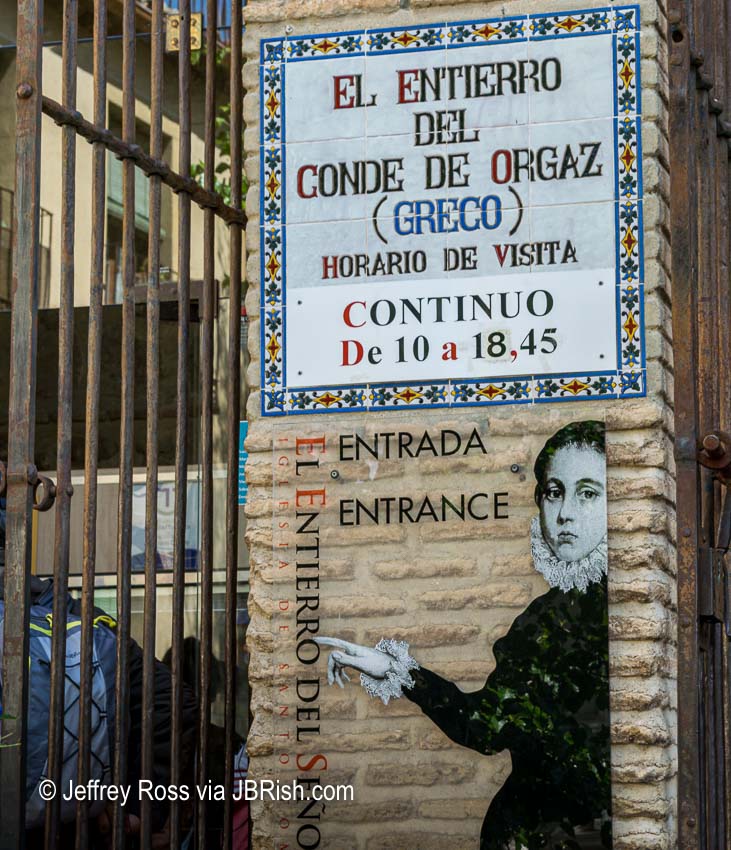 Read more about the painting and its history HERE

There was a significant Jewish Quarter in Toledo… 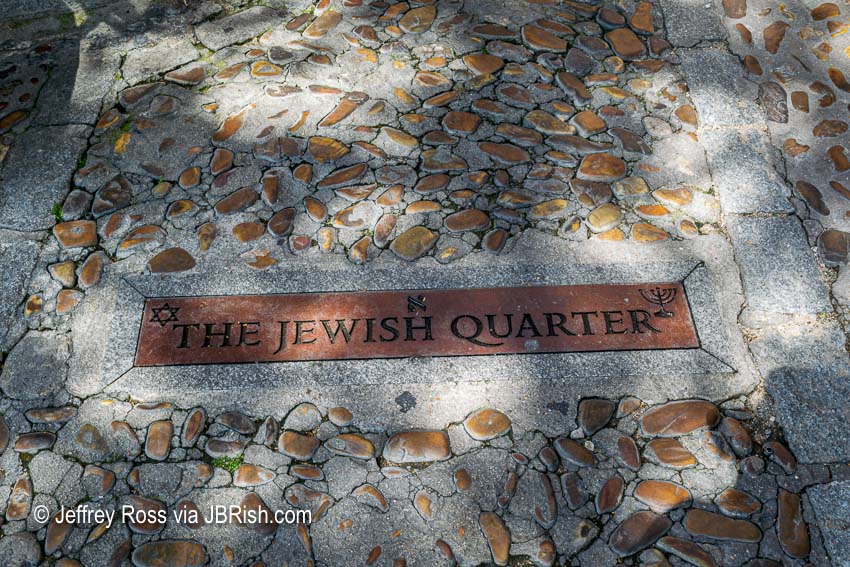 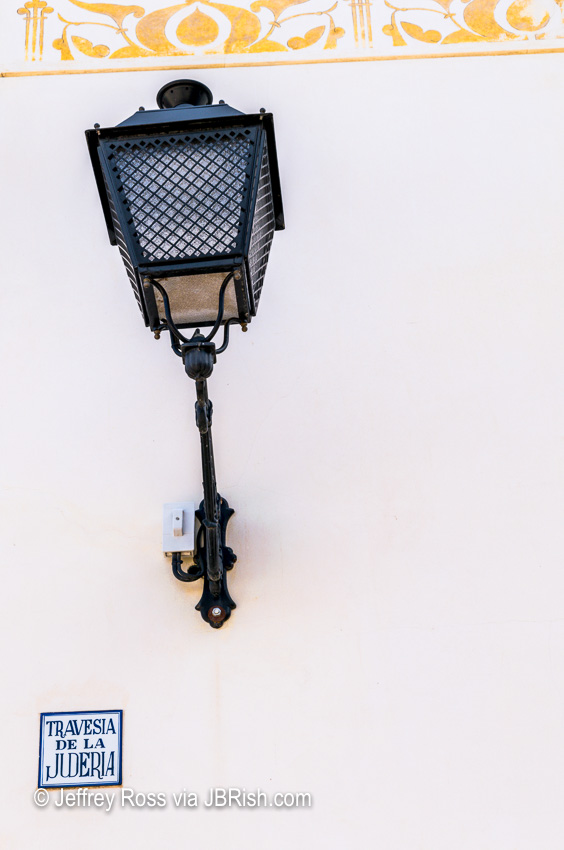 The street sign translates to: The crossing of the Jewry

We visited the Synagogue of Santa Maria la Blanca. Interestingly enough the shrine was built by Muslim architects. It was later converted to a church and currently serves only as a historical site. 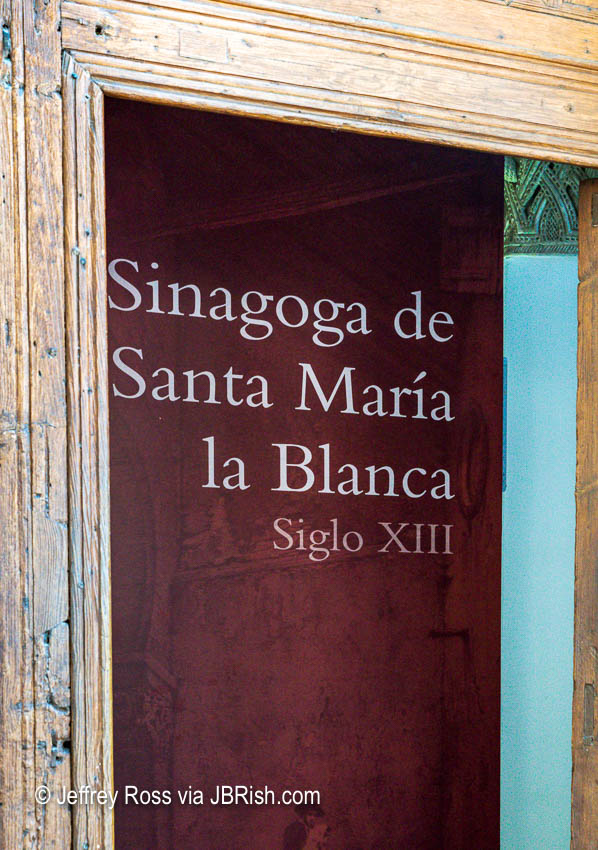 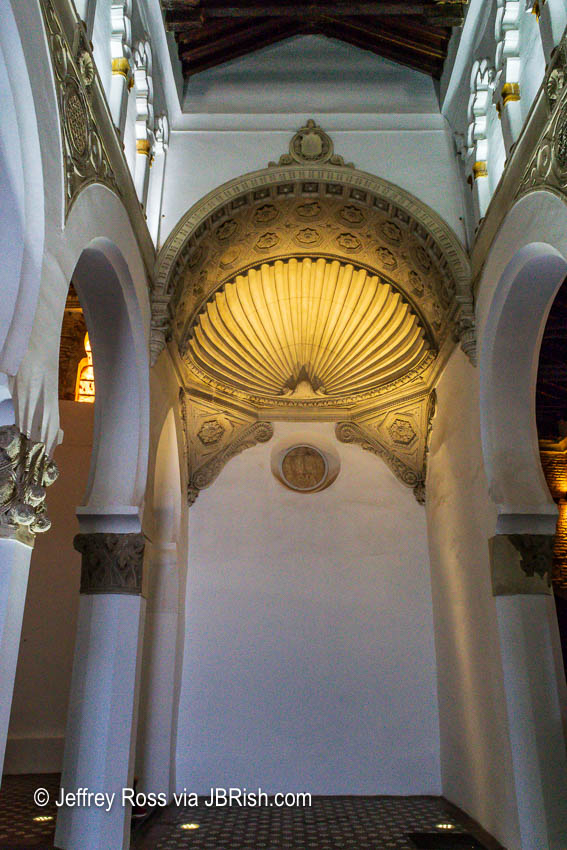 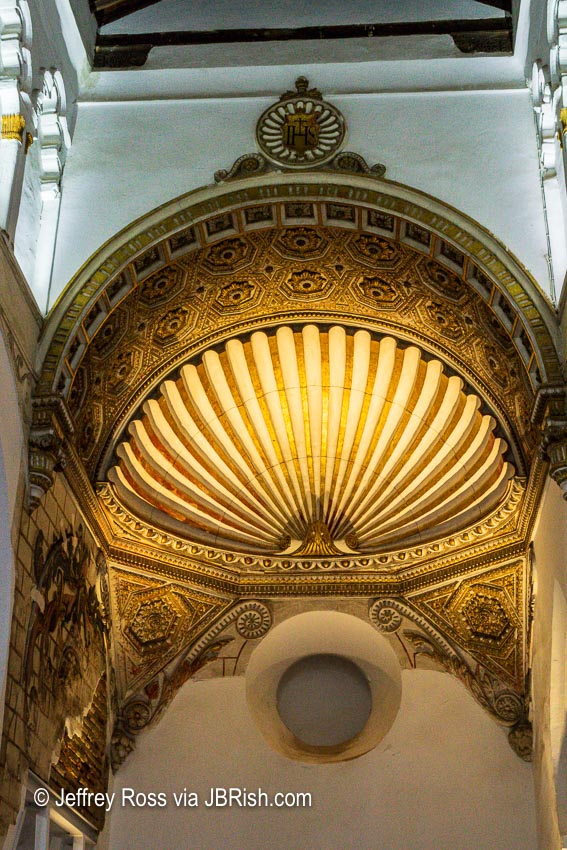 This oil painting of the Holy Land with Hebrew lettering hints at the Jewish this building’s Jewish past. 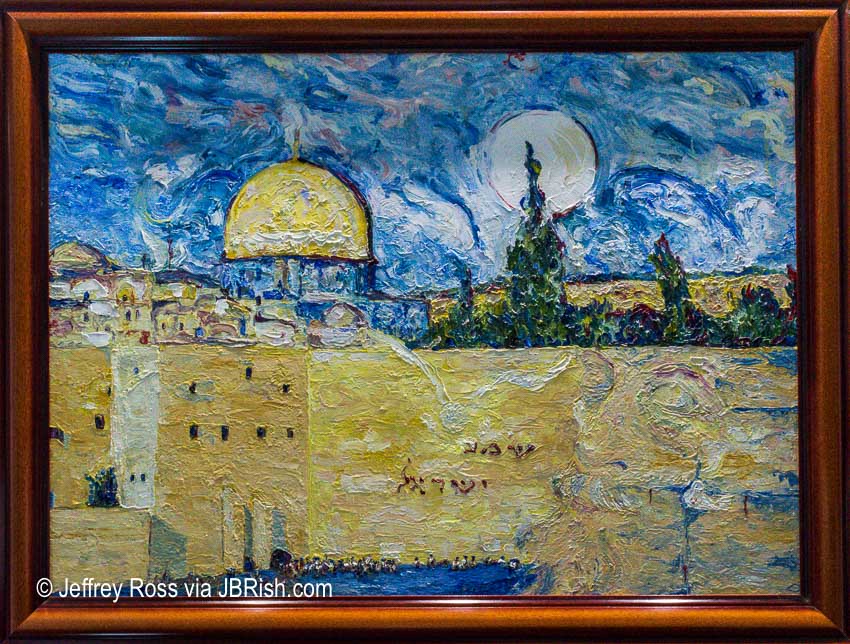 A Jewish star is also visible among the sculpted details of the interior. 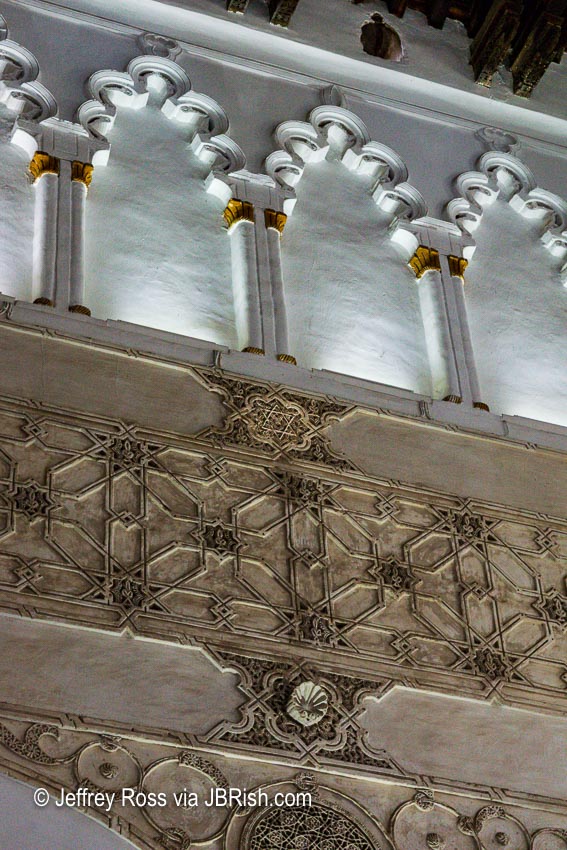 During our visit to a souvenir shop, I noticed a most interesting drain downspout! 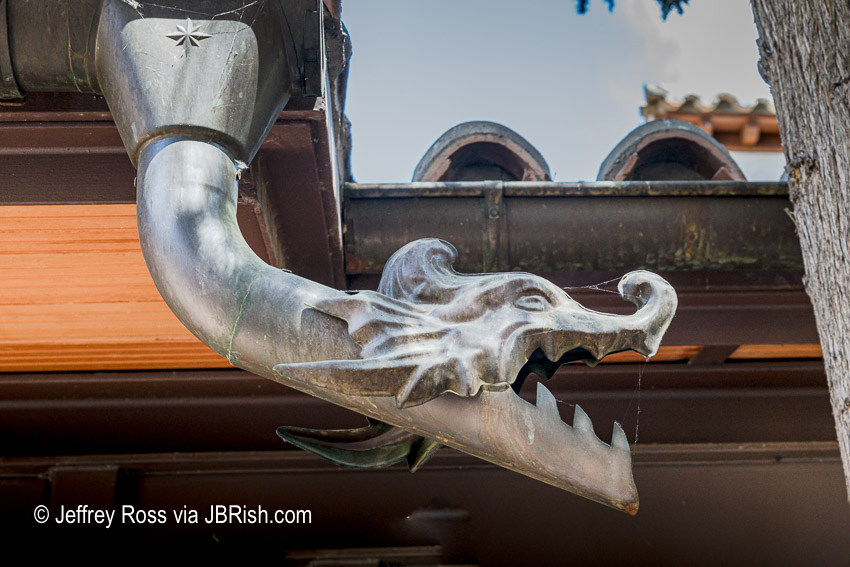 This attractive facade of the School of Arts and Crafts shows a relief of what appears to be the school’s coat of arms. 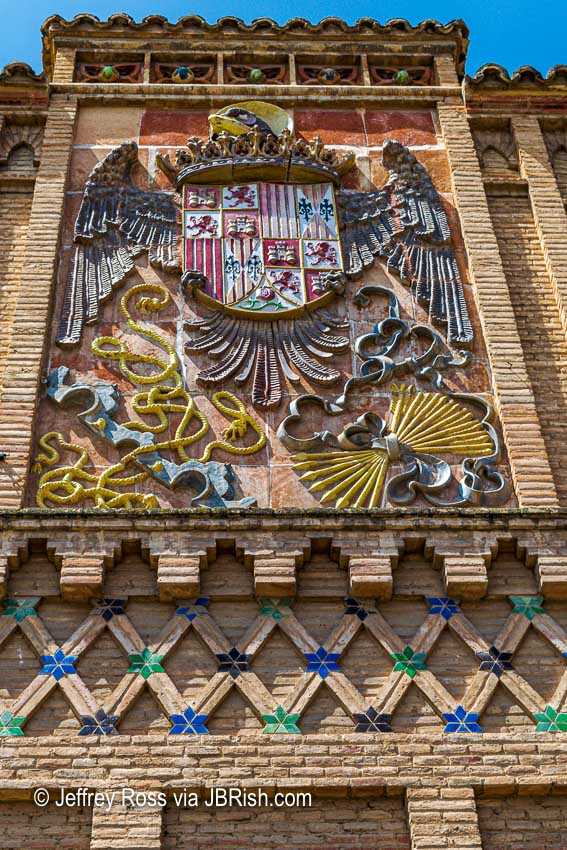 The Alcantara Bridge is one of the main access points in Toledo. 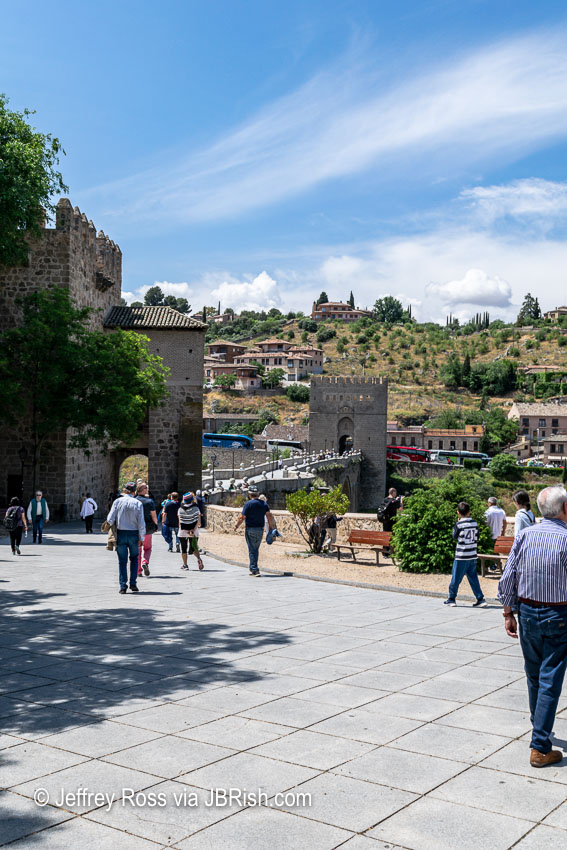 Below is a view near the bridge looking back at the city of Toledo. 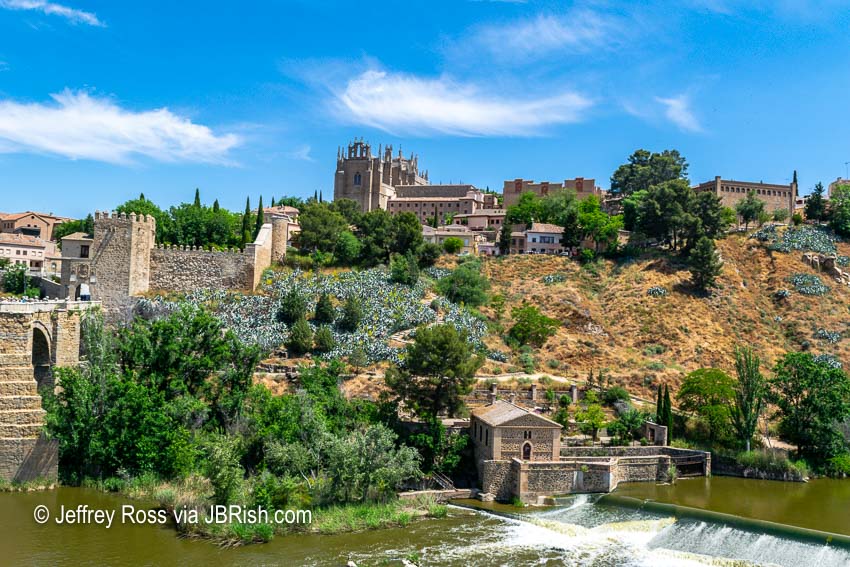 This was our last city to see in Spain and Portugal. Of course there was more we would like to have seen and perhaps some day we will return.

* You can read more about the derivation of the phrase Holy Toledo HERE.