Little were we aware of the “surprise” awaiting us as we disembarked the bullet train from Cordoba and made our way to the streets of Madrid just outside the railroad station. 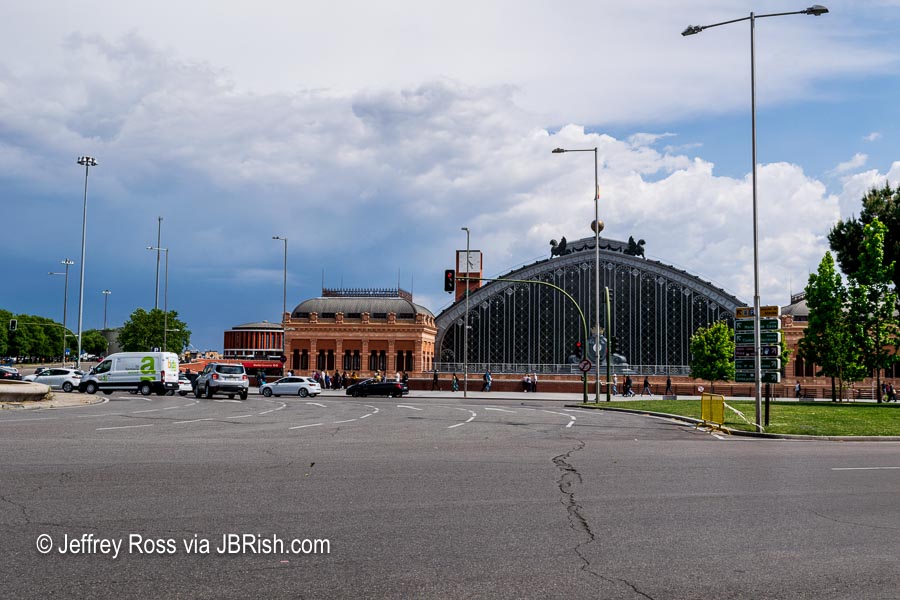 Cars had abandoned the streets and were replaced by large groups of people briskly walking toward our hotel at the Plaza de las Cortes. 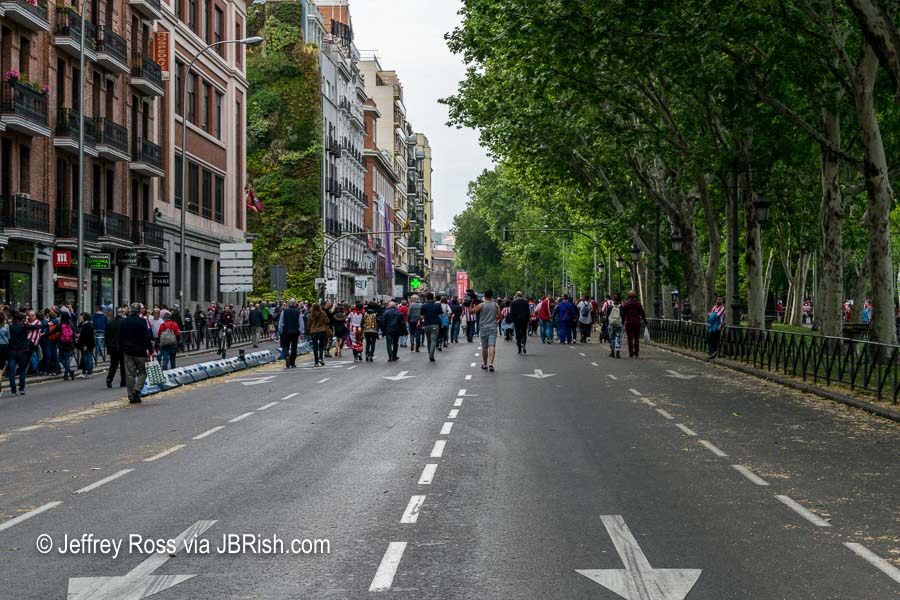 Our guide explained that the bus was not able to reach our hotel and we had a walk of several large blocks. The result was that the luggage could not be delivered until some time later (which turned out to be close to midnight). Anyone needing medications or other important supplies was asked to stay behind to retrieve a small quantity of items to carry with them. And thus the walk began! 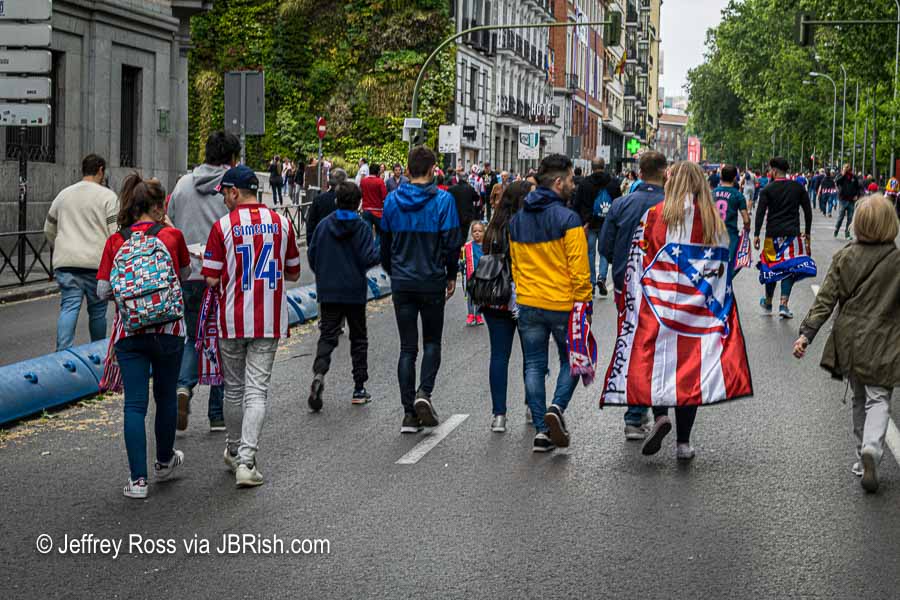 The home team had just won a recent soccer championship. Celebration and merriment were the theme of the moment!

As we made our way through the ever more crowded streets, we passed a massive living green wall. This was perhaps the most exceptional example I had ever seen so kudos to those vertical gardeners of Madrid! 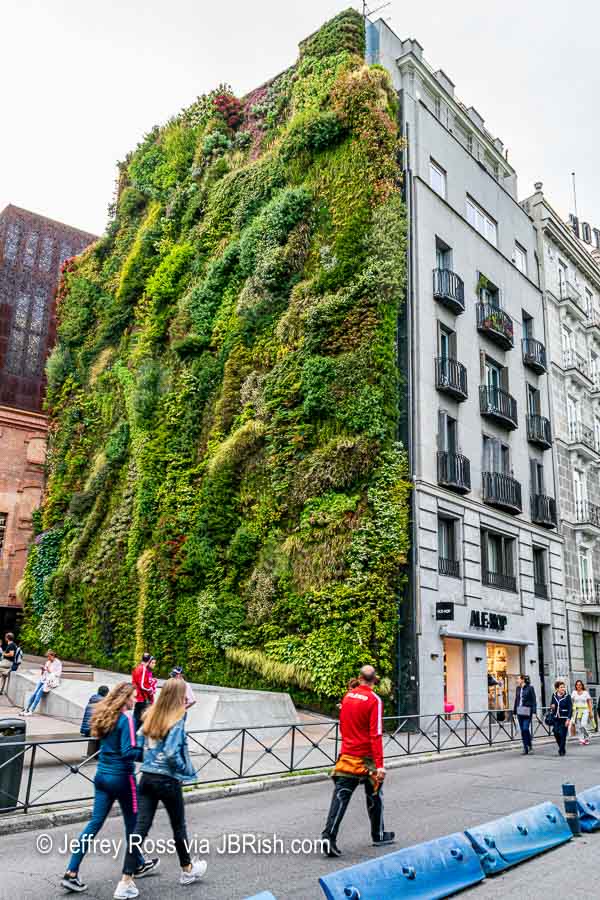 This was the scene just outside the hotel as we arrived. 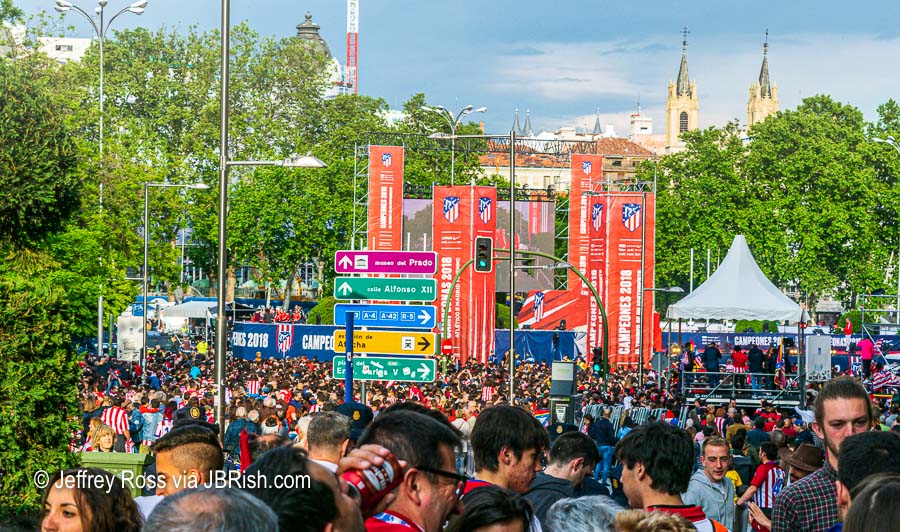 We had some time before evening was upon us so we headed out to do a quick walkabout and gain some familiarity with the local sights. We continued to be impressed by the beautiful colors of the houses as well as the interesting contrasts in this urban district. 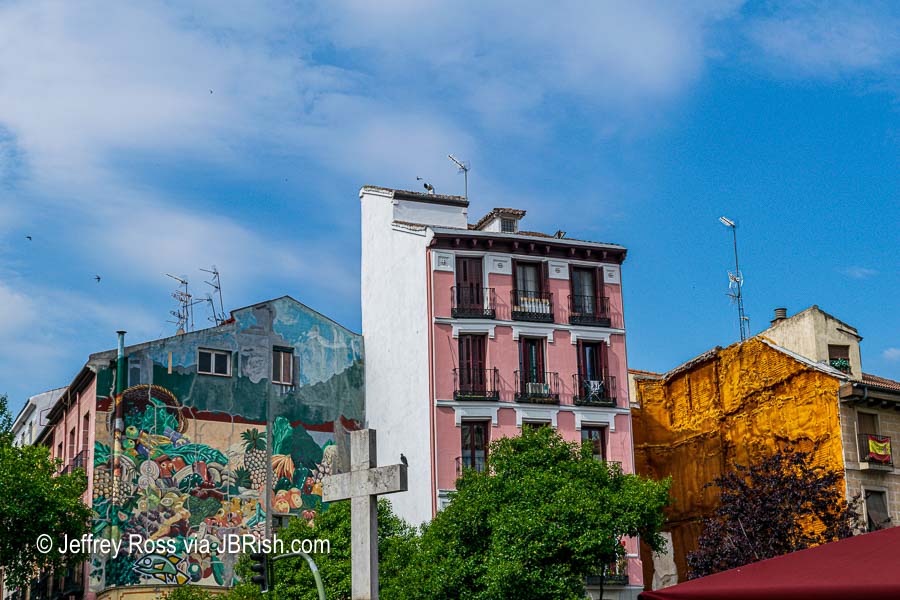 On the following day, it was an early breakfast and off to visit the The Palacio Real or Royal Palace, located at the Plaza de la Armeria. 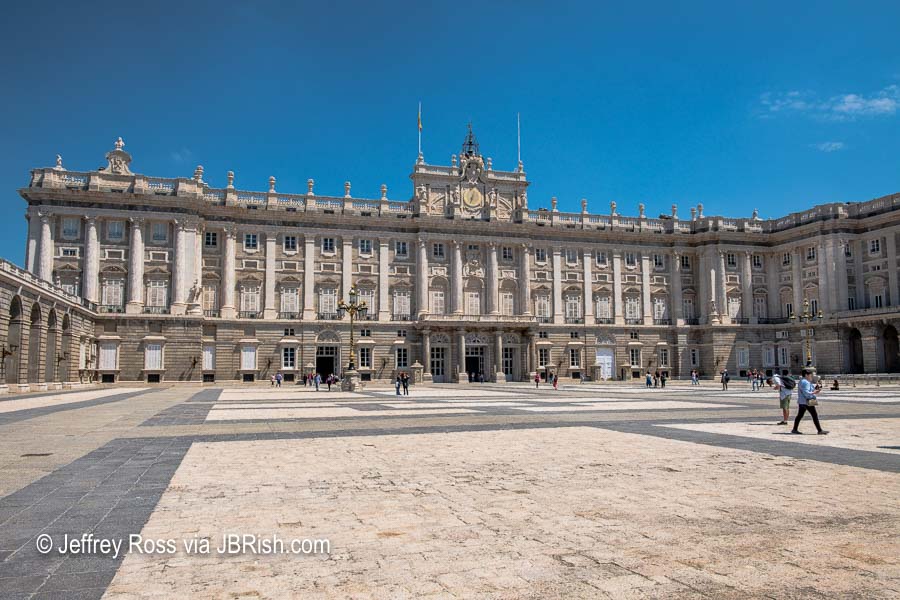 “The structure itself is enormous and an awe-inspiring sight (both inside and out). It measures 135,00 square metres and is separated into 3,418 rooms. That’s almost double the size of England’s Buckingham Palace or France’s Versailles.**”
**source:

Once the home of the Kings of Spain, the palace today serves as the site for state ceremonies, official banquets and other government functions. Upon entering, visitors are soon rewarded with a magnificent staircase and and royal trappings of red velvet and golden accents. 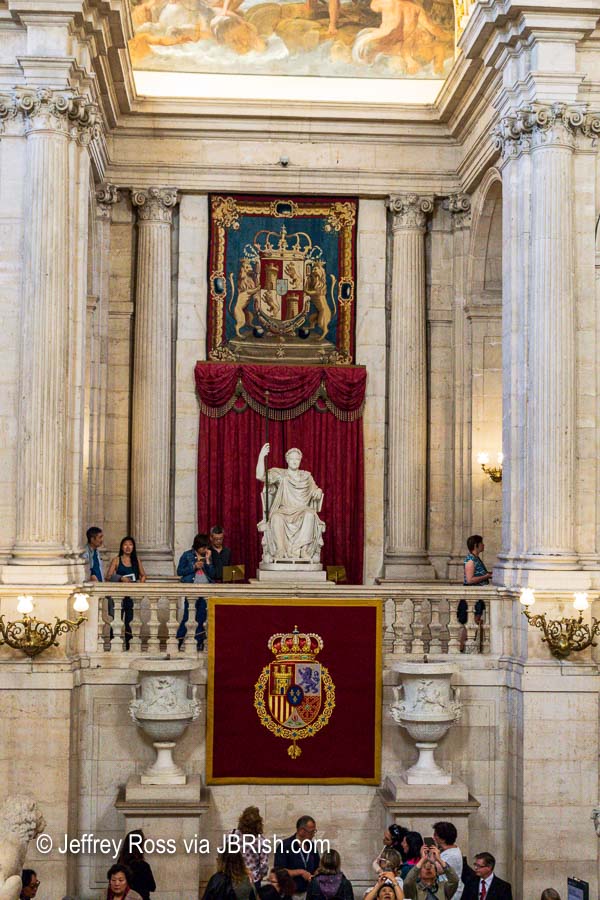 “The Grand Staircase is composed of a single piece of San Agustin marble. Two lions grace the landing, one by Felipe de Castro and another by Robert Michel. The frescoes on the ceiling is by Corrado Giaquinto and depicts Religion Protected by Spain. On the ground floor is a statue of Charles III in Roman toga, with a similar statue on the first floor depicting Charles IV. The four cartouches at the corners depict the elements of water, earth, air and fire.**”

This area of the palace can be very crowded at times which makes it difficult to arrange for a good photographic composition without milling crowds. 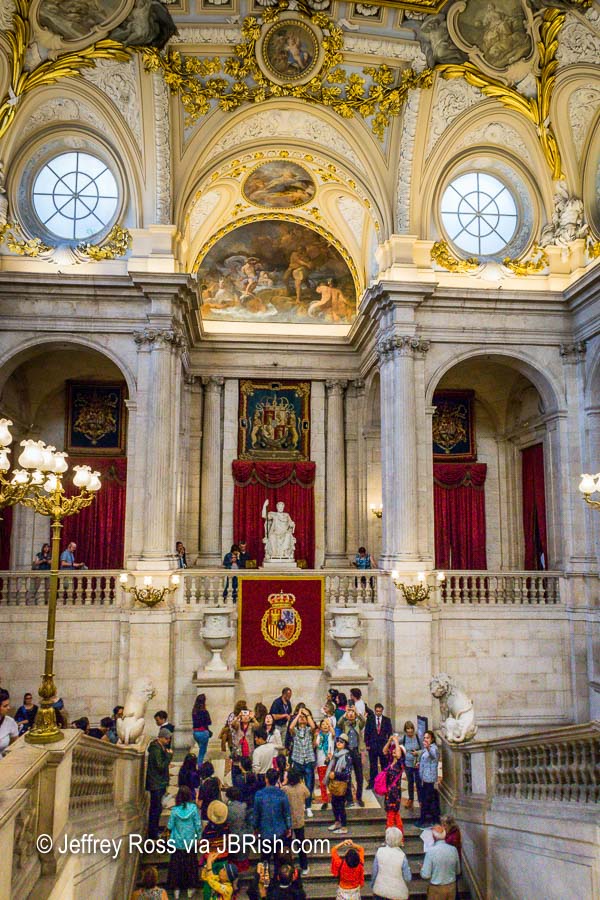 On the ceiling above the grand staircase is a painting by the Italian artist Corrado Giaquinto which is titled Religion Protected by Spain. 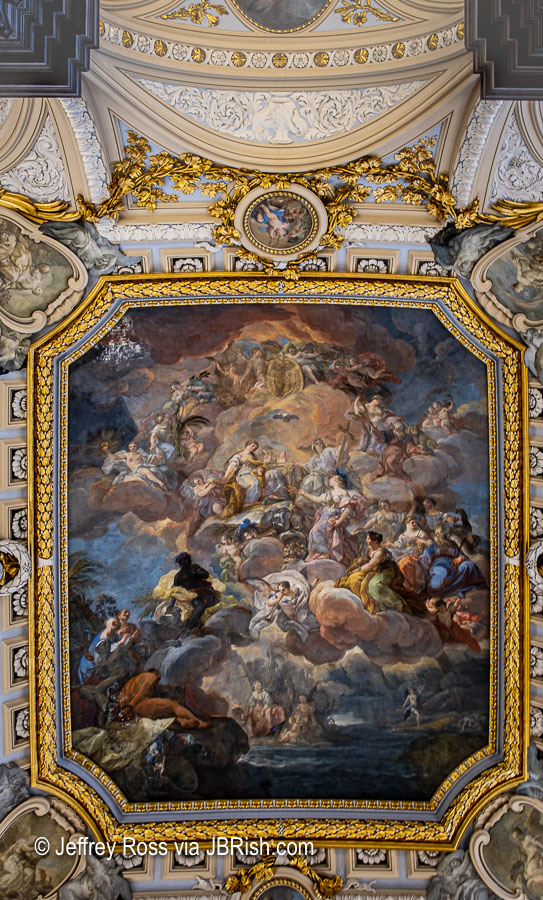 Regal ornamentation was on exhibit throughout the rooms in the Royal Palace. 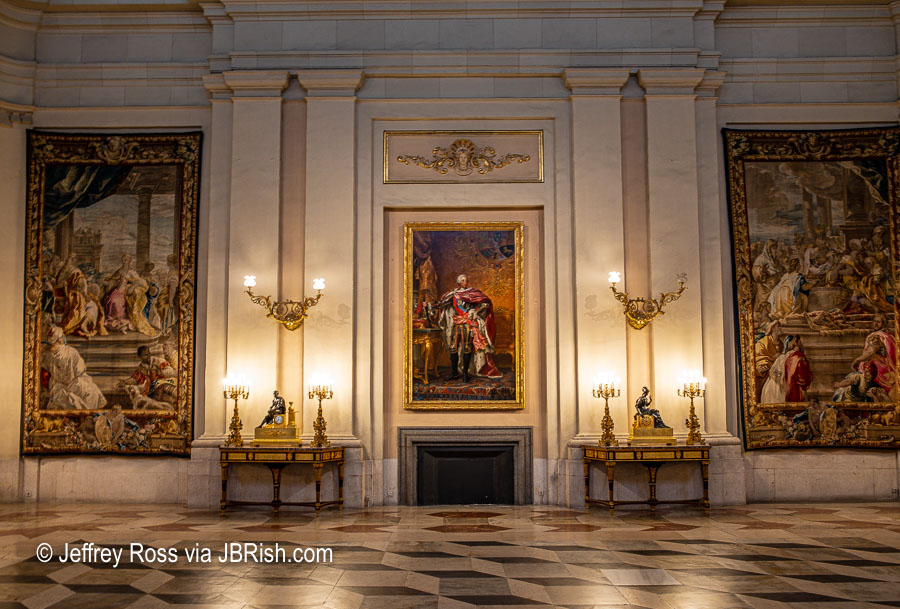 Tapestries and opulence on display

There were a few tell tale signs of modernity such as the painting of the family of Juan Carlos I by Antonio López. 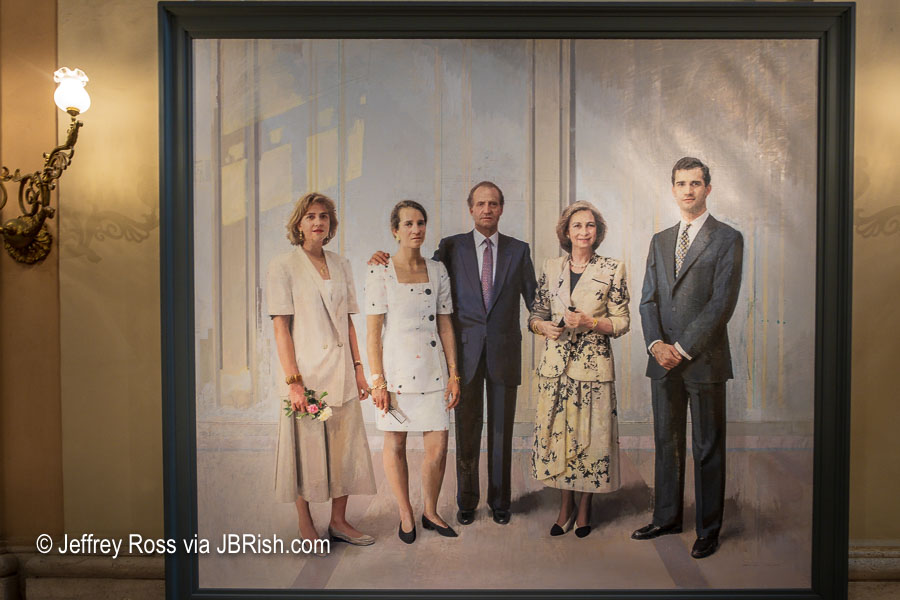 Pictured are King Juan Carlos I, Queen Sophia and their 3 children – Elena, Cristina and the new King Felipe IV.

“The Manchegan painter Antonio López has devoted 20 years to the painting The Family of Juan Carlos I. The final version of this work, after numerous modifications, is the culmination of the exhibition The Portrait in the Royal Collections…**”

As we left the palace, we took a brief walk to one of the “balconies” accessible via the plaza to view an area that is now a park, but once served as the hunting grounds for the Spanish Royalty. 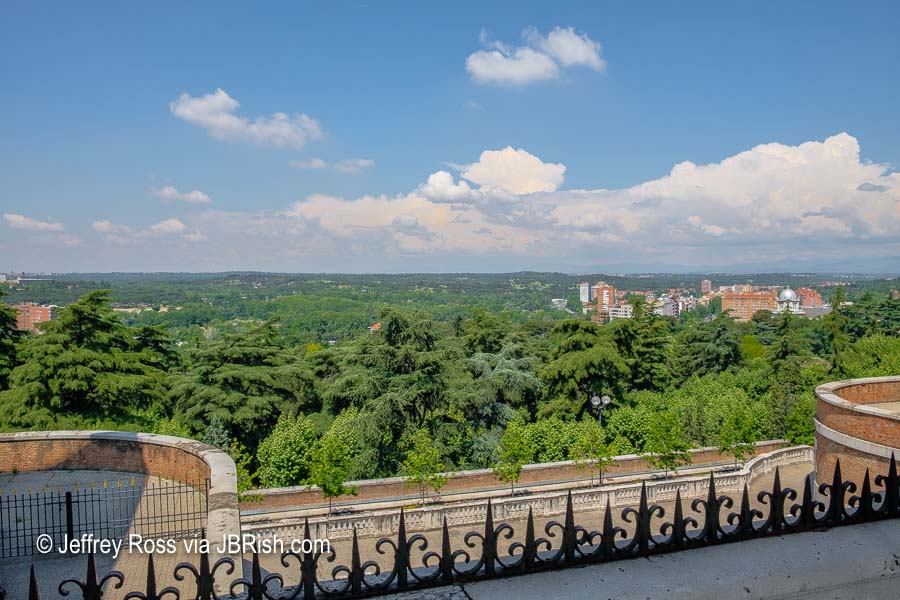 Located south of the Royal Palace (at the other end of the Plaza de la Armeria) is another architectural wonder, the Cathedral Santa Maria la Real de La Almudena. We did not have an opportunity to visit the Cathedral, but if we return to Madrid, it will be on the list of things to see. 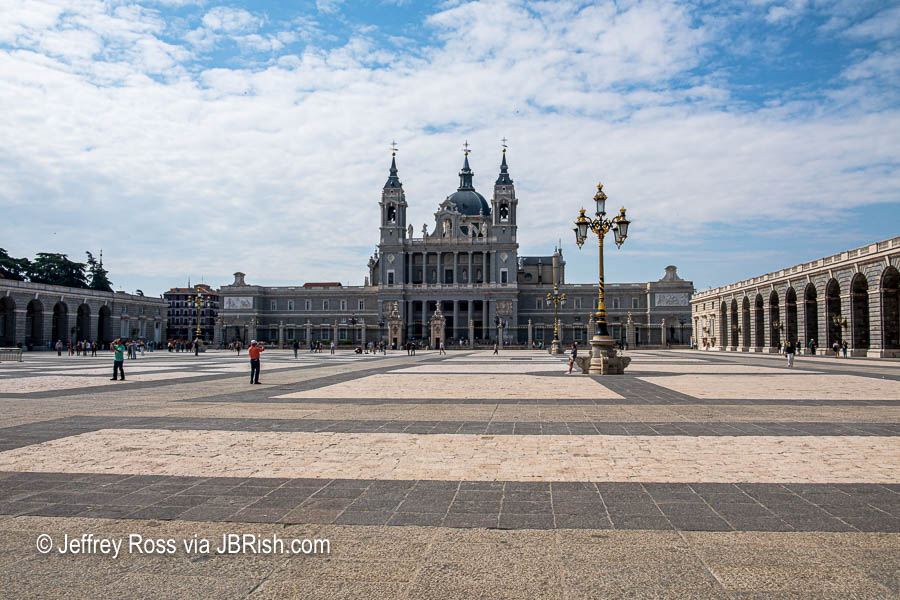 As we were aboard the transport heading to another destination, we passed some of the beautiful gardens and parks surrounding the palace and cathedral. 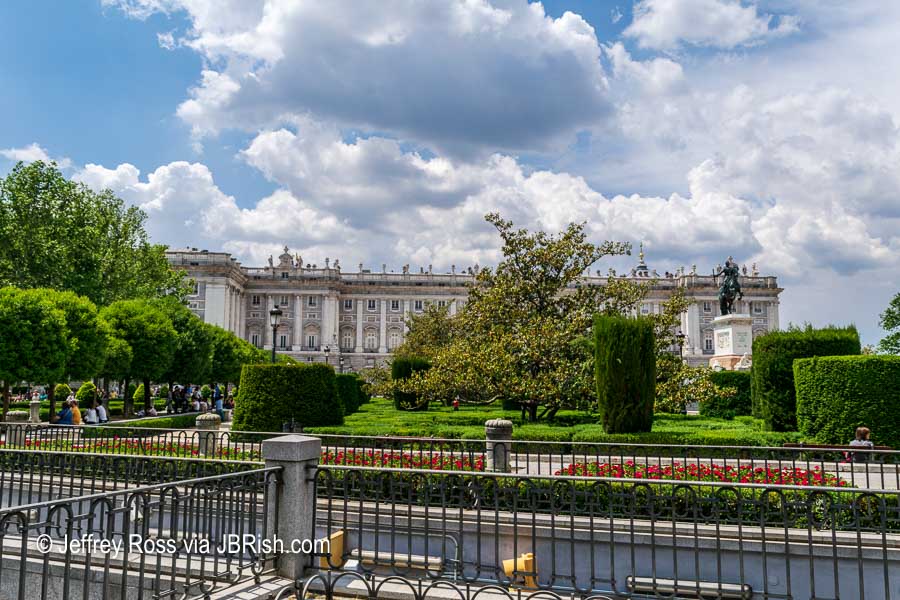 There is plenty to see and admire in Madrid. A very popular tourist attraction is the Botín restaurant recognized as the oldest restaurant in the world according to the Guinness Book of World Records. Tourists stop by to have their pictures taken in front of the wooden-paneled facade. 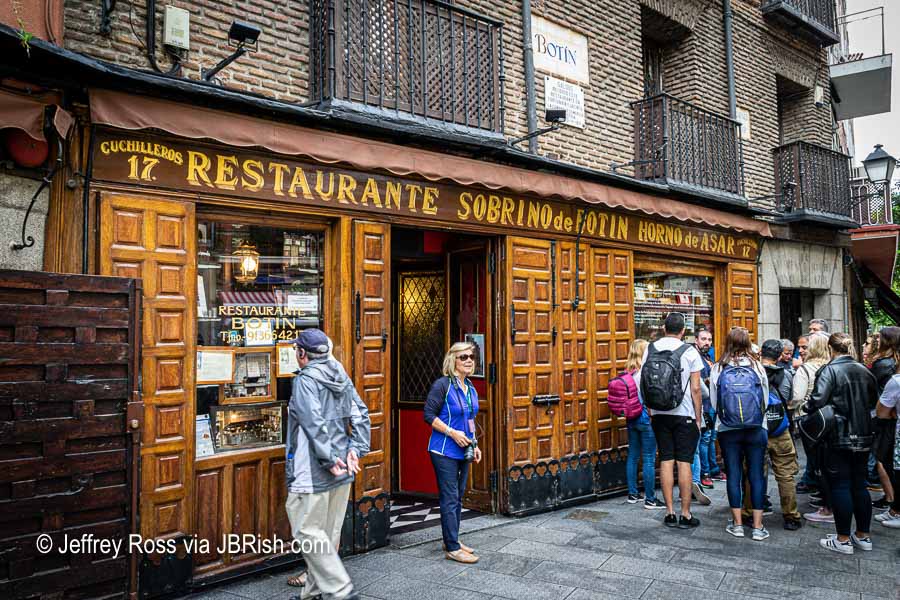 Read more about the history and current status of Botín

While strolling through the same neighborhood, we came across this whimsical modern art gallery. 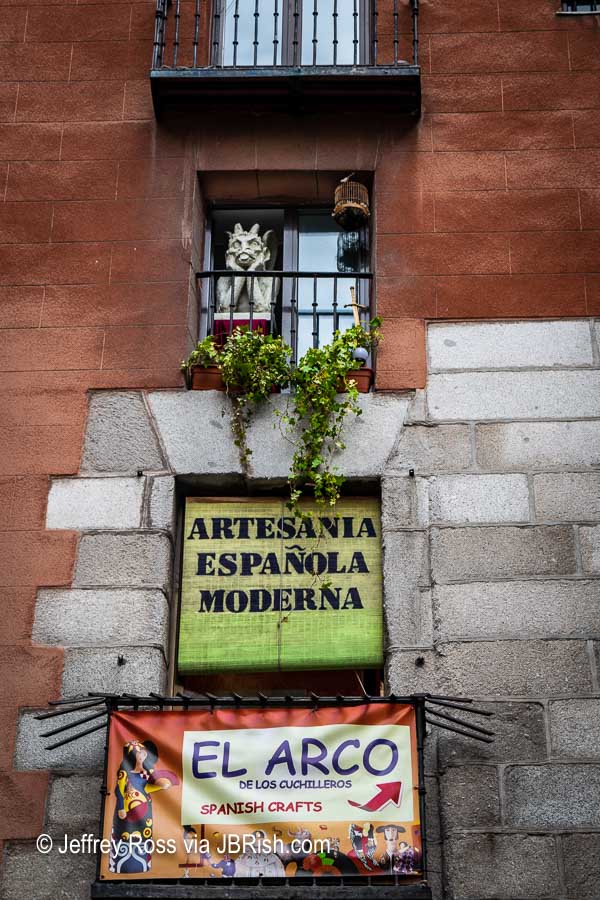 There were numerous shops and floral displays to please the eyes and interests of passersby. 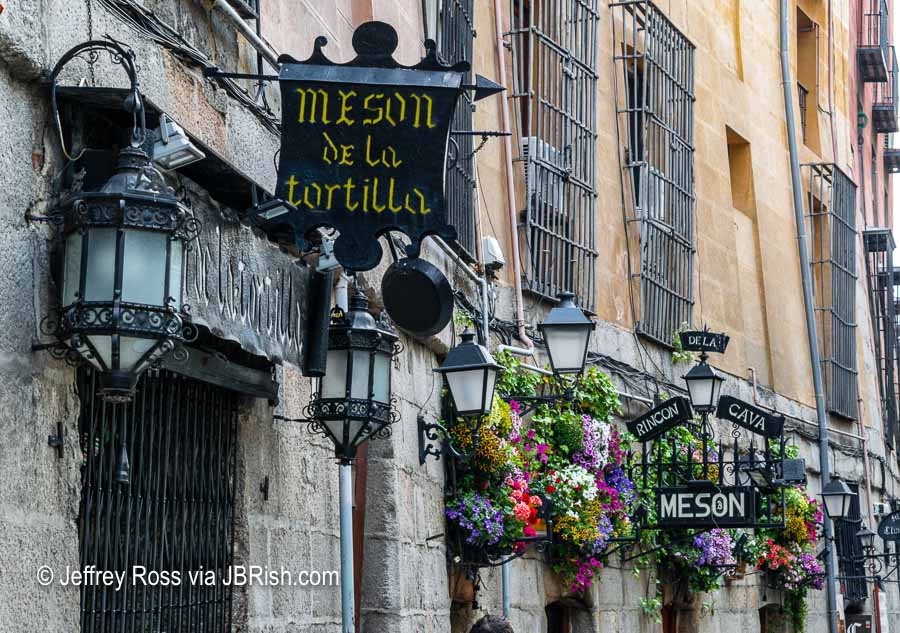 Closer to our hotel, we took another walk just about dinner time. Parking, as in most major cities, can be an issue in Madrid as this car parked along the side of the narrow street which appeared to be a walking only thoroughfare. 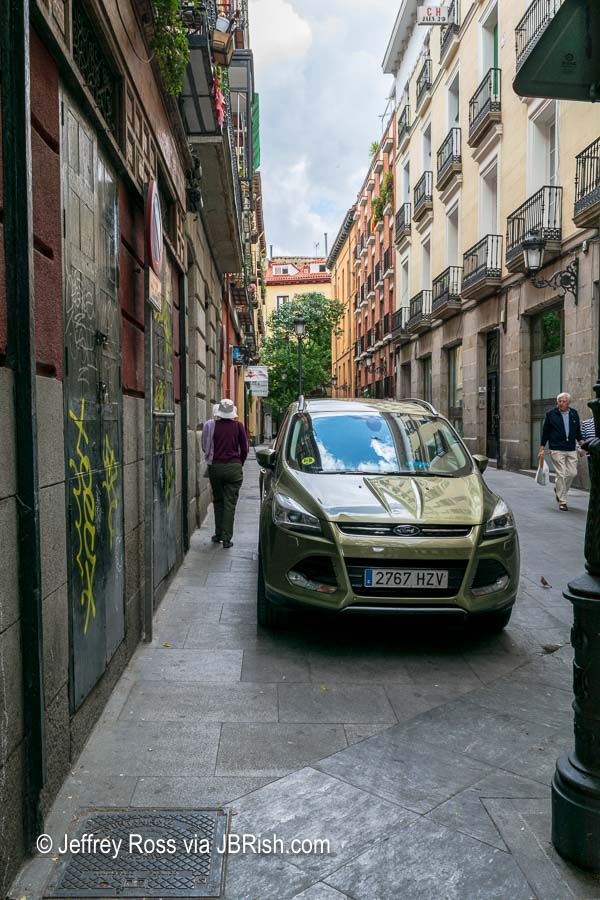 A visit to the Prado, Spain’s venerable art museum, was on our “things to do” the following day, but as we passed by on this day, there was a line going completely around the museum for blocks and blocks. 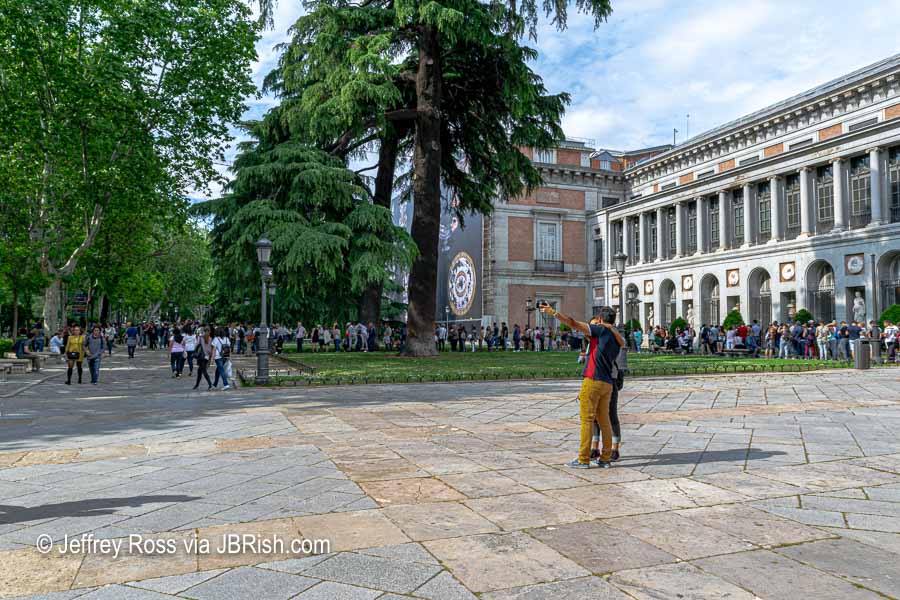 Out of curiosity, I stopped to ask a gentleman waiting in line what was happening and he cheerfully explained that there was free admission between 6 and 8 pm from Monday to Saturday (and other days as well) – check this web page if interested – https://www.museodelprado.es/en/visit-the-museum

That was enough for this day. It was time to rest a bit and prepare for tomorrow’s adventures.