We were excited to begin our second day in Seville because our walking tour was going to take us to the Alcazar, one of the oldest palaces currently in use by monarchs. Spain’s royal family resides there when duties call them to Seville or nearby towns. The Alcazar has also gained a bit of notoriety as the setting for some episodes of The Game of Thrones.

The Alcazar first served as a fort and was later used as a palace for the leaders of the cultures dominating the area. As noted in prior posts, centuries-old buildings contain vestiges of the societies that claimed ownership of them over time and the Alcazar is no exception.

Tourists will note elements reminiscent of the Renaissance and Baroque periods as well as architectural influences of the Arab and other cultures. The main entrance is through the Lion’s Gate adjacent to the Plaza del Triunfo which is just one of the first of many interesting sights visitors will see. 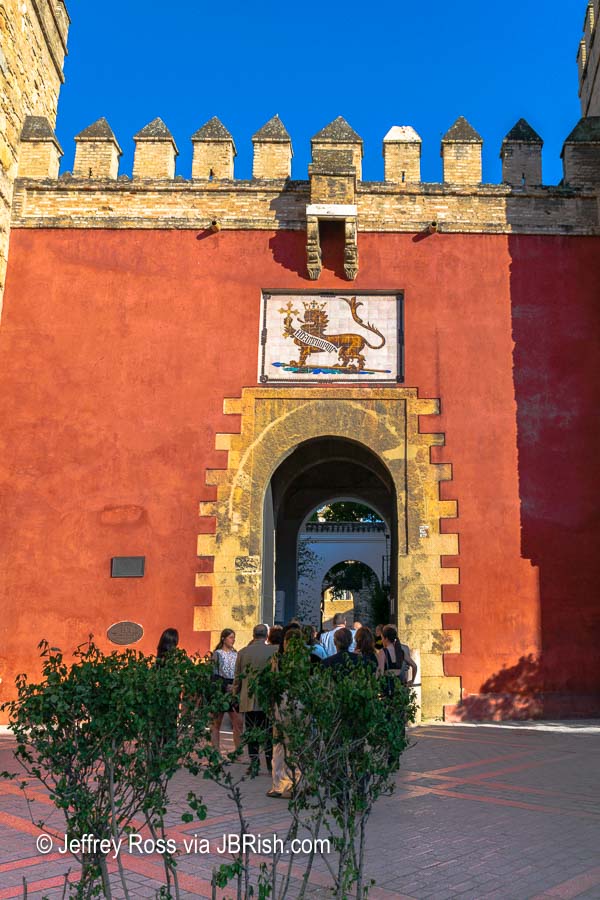 Here is a close-up of the lion inlay. 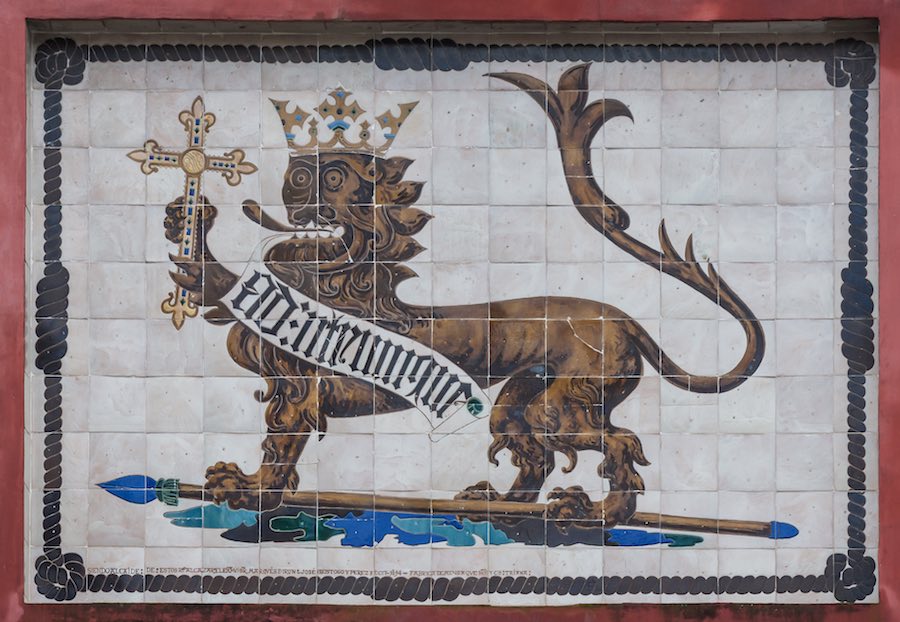 Visitors pass through an archway to arrive at the Patio de la Montería (The Hunting Courtyard). 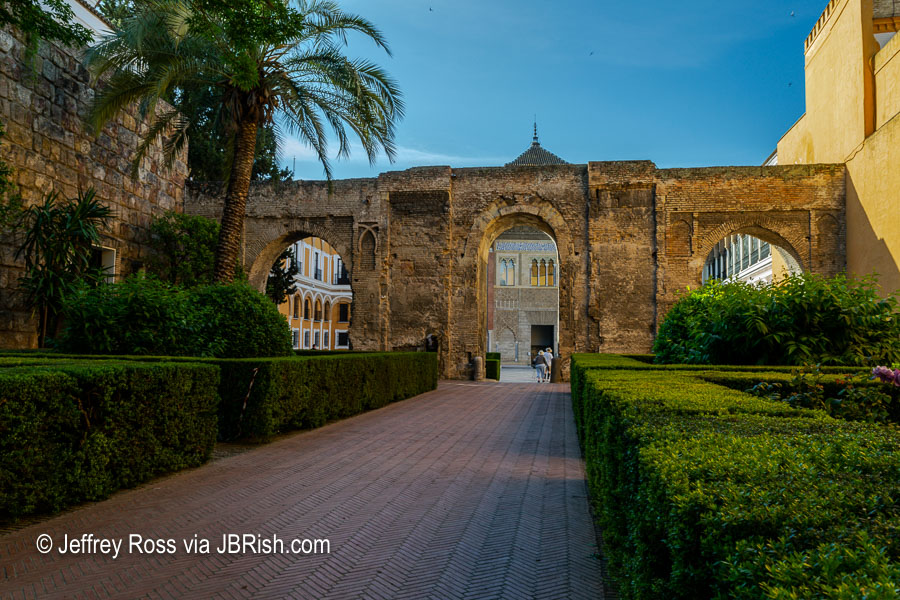 This is a photograph from the other side showing the manicured hedges and roses as well as other garden and architectural accents. The stonework is old and it looks its age! 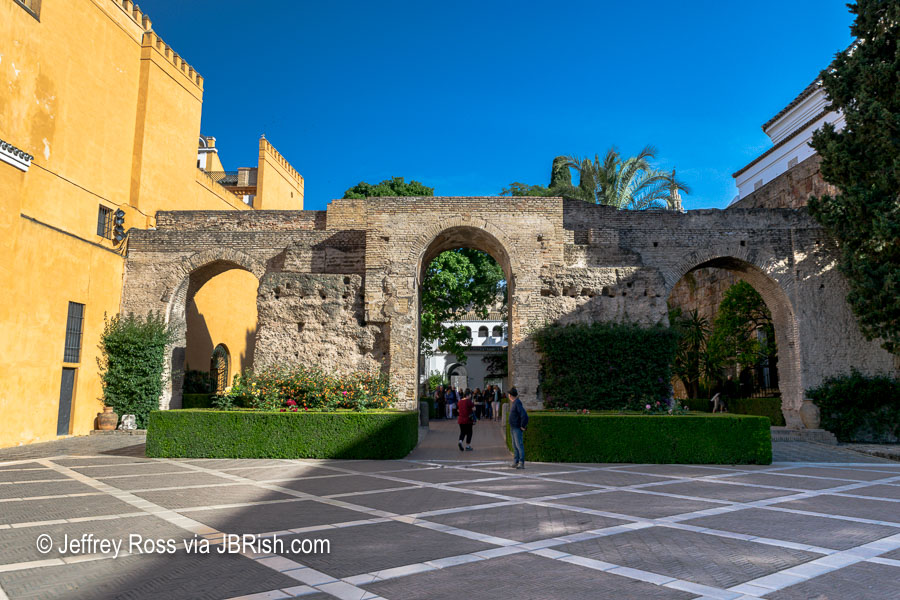 There are many notable characteristics of the Alcazar, but the numerous courtyards creating outdoor and indoor rooms must be high on that list. As the name implies, the Hunting Courtyard is where the royalty would gather those participating in the hunts. It currently serves as an entrance to the Royal Palace of Seville.

The striking facade of the Mudejar Palace, or Palacio del Rey Don Pedro, located inside the Alcazar was constructed around 1360. 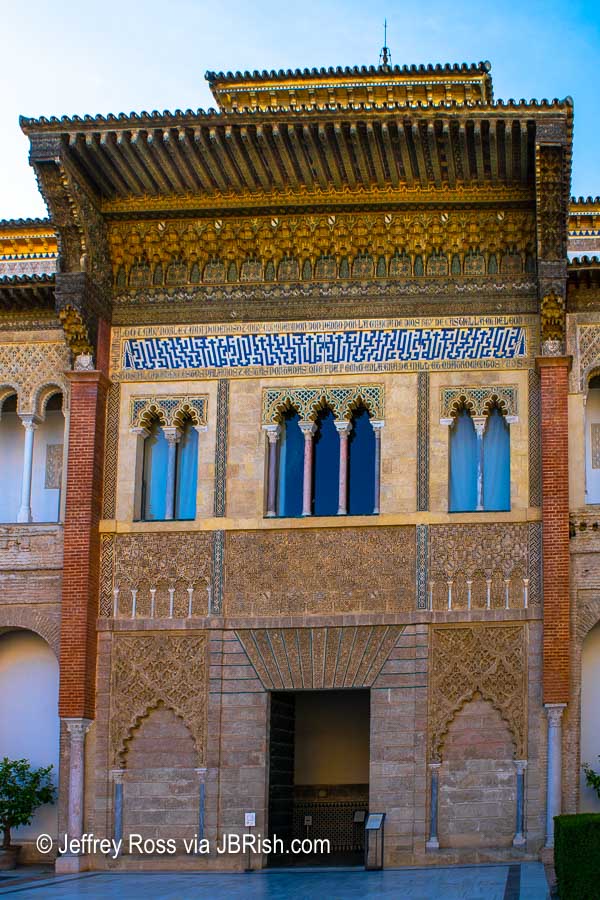 Notice the intricate patterns which I found remarkable considering the time in which it was built. 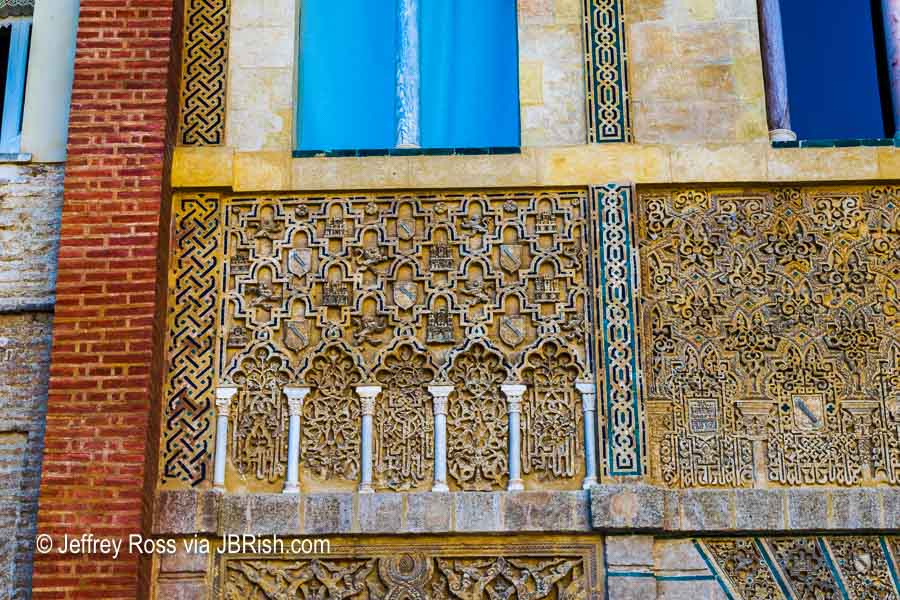 Other buildings framing the palace entrance were vibrantly colored which does not show as well in this shaded area. 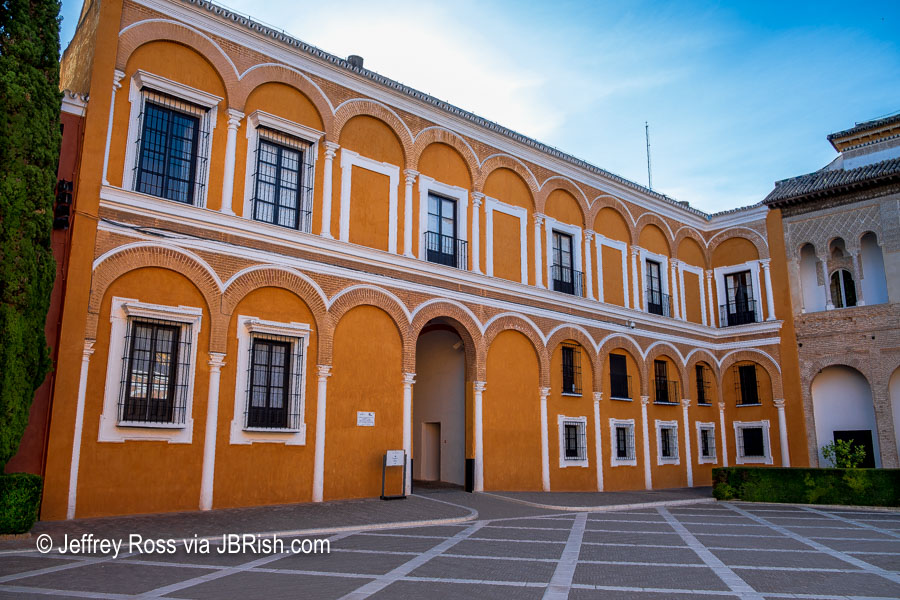 The Dolls Courtyard (Patio de las Munecas) in the Alcazar had incredible structural details. The name is derived from the small abstract stucco faces that decorate some of the arches. I did not know about this “hidden” feature at the time, but the Internet has come to the rescue! 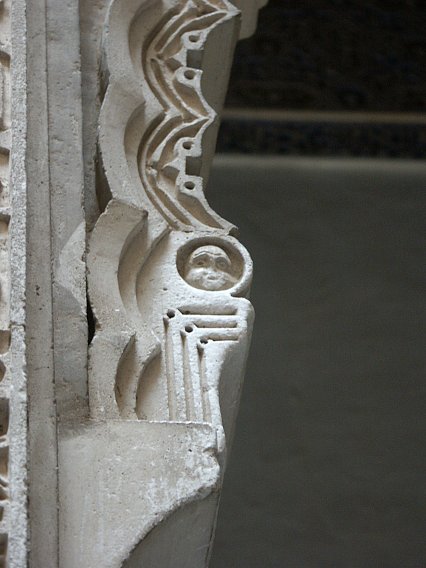 A close up picture of one the dolls heads, a “hidden” architectural element in the Dolls Couryard of the Alcazar.
Photo courtesy of https://www.bluffton.edu/homepages/facstaff/sullivanm/spain/seville/alcazar/alcazar4.html 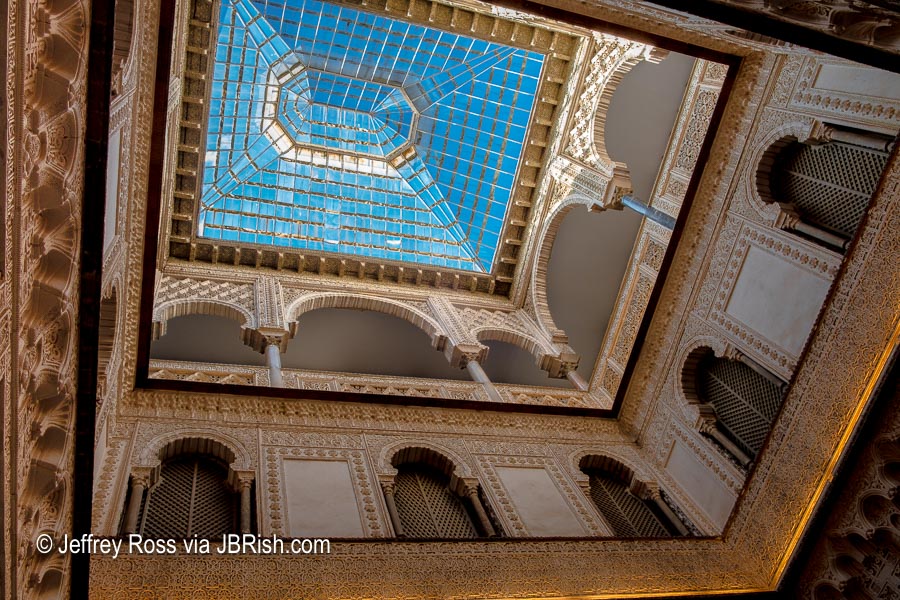 The square domed skylight of the Dolls Couryard (above) allowed filtered light to fill the area which enabled the play of light and shadow to accentuate the detailed stucco work (below). 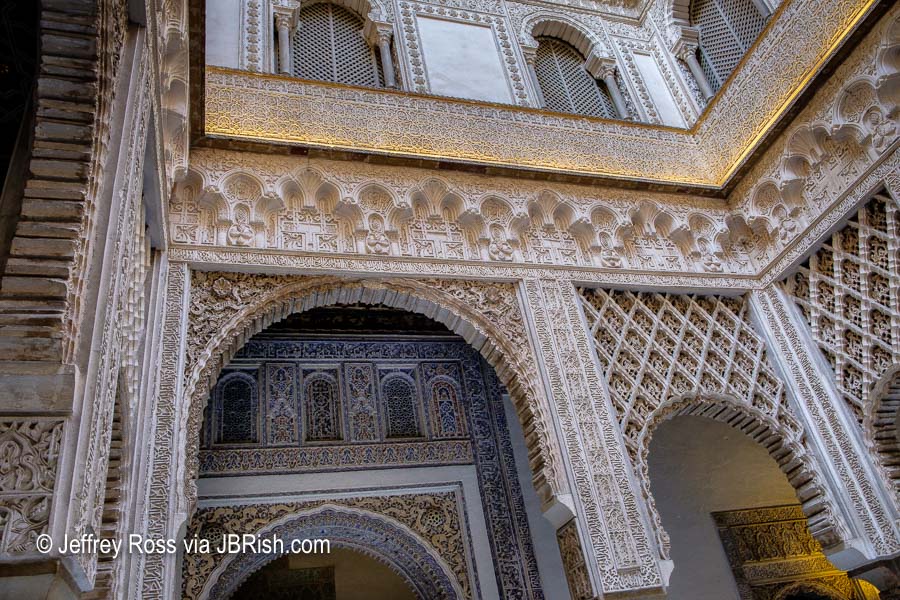 The Ambassador’s Hall (Salón de Embajadores – below), sometimes referenced as the Throne Room, was a very important area of the Alcazar because it was used for public events and affairs. The arches were beautifully decorated with shades of blue. The pronounced curves have been referred to as “horseshoe arches.” 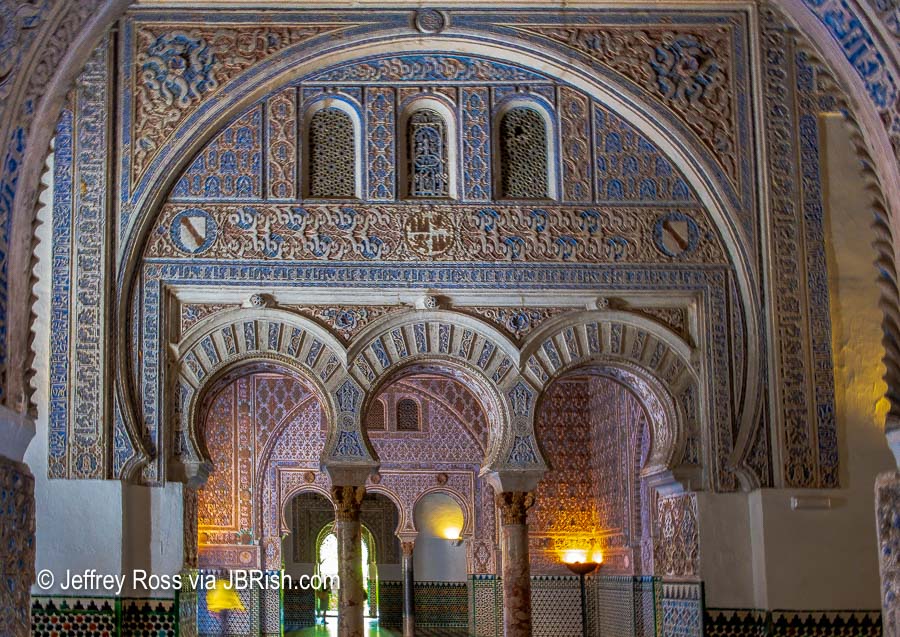 Here is a closer picture of some plaster details! 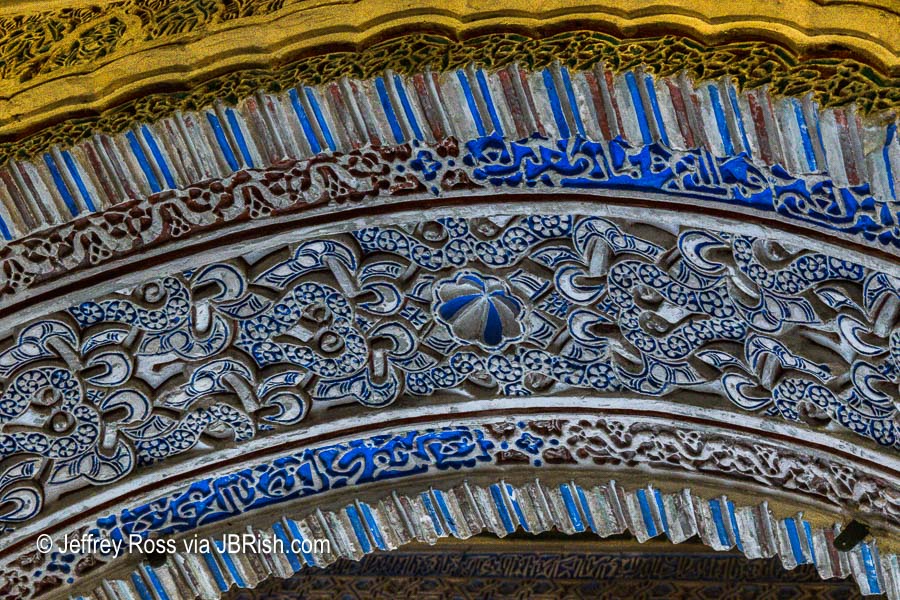 If this was not enough, a stunning dome made of gilded wood in the Ambassador’s Hall added an even more decadent accent. 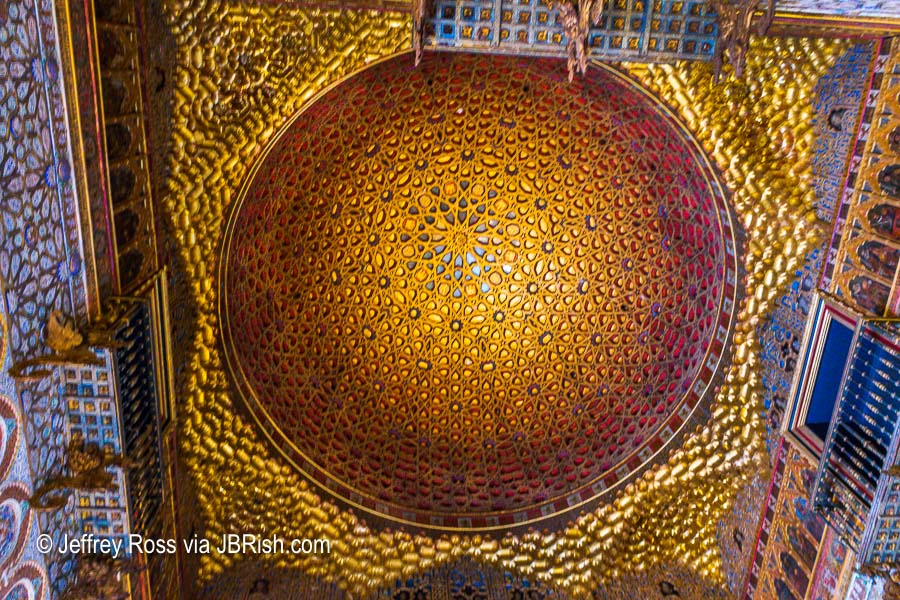 The Courtyard of the Maidens (Patio de las Doncellas) has a reflecting pool which would be integral to a Moorish design. The name refers to the legend that the Moors demanded 100 virgins every year as tribute from Christian kingdoms in Iberia. [1] Recent research indicated that the sunken garden was an original feature and thus was recently restored replacing a marble courtyard with center fountain. 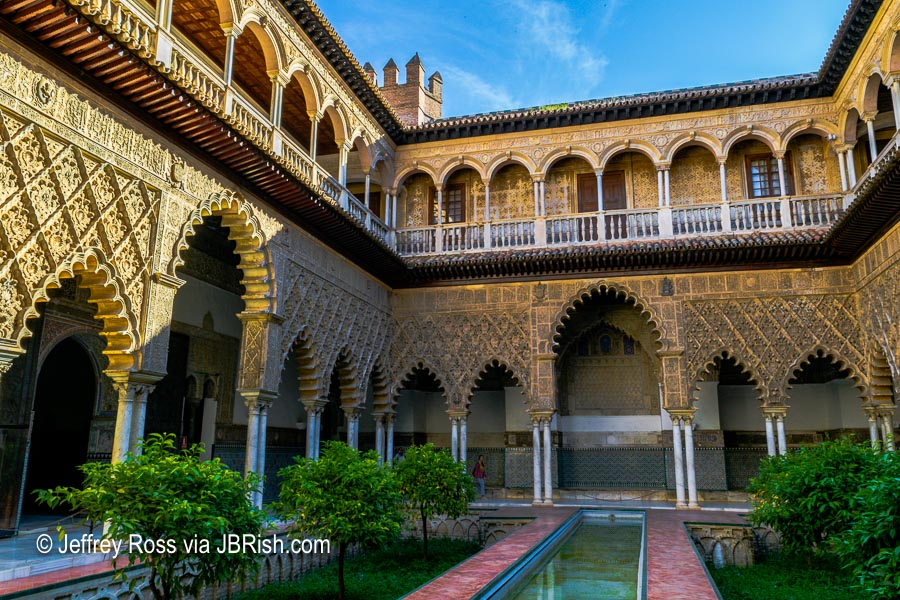 When visiting a building of such historical importance and magnificence, it is really difficult to appreciate all it has to offer in the moment. In addition to all of the beautiful architecture and artwork mentioned thus far, the tile work along the walls was impressive.

The colorful tile below contains portraits of Charles V and Isabel of Portugal. [2] 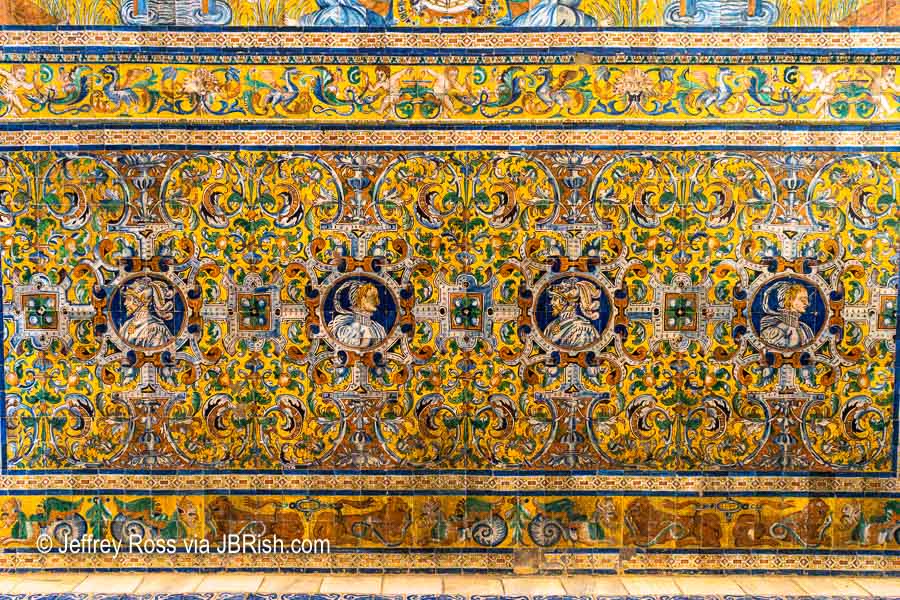 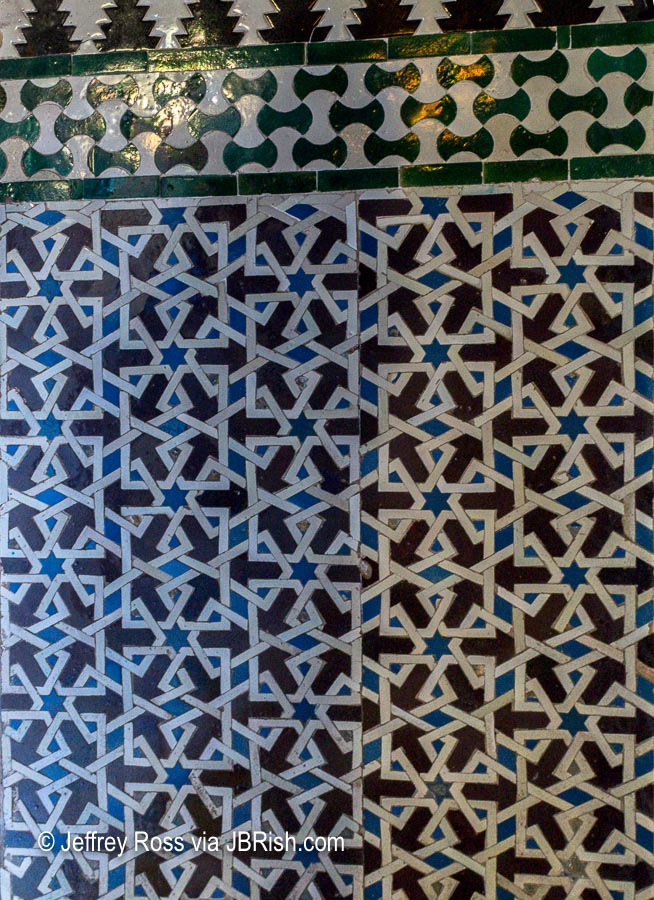 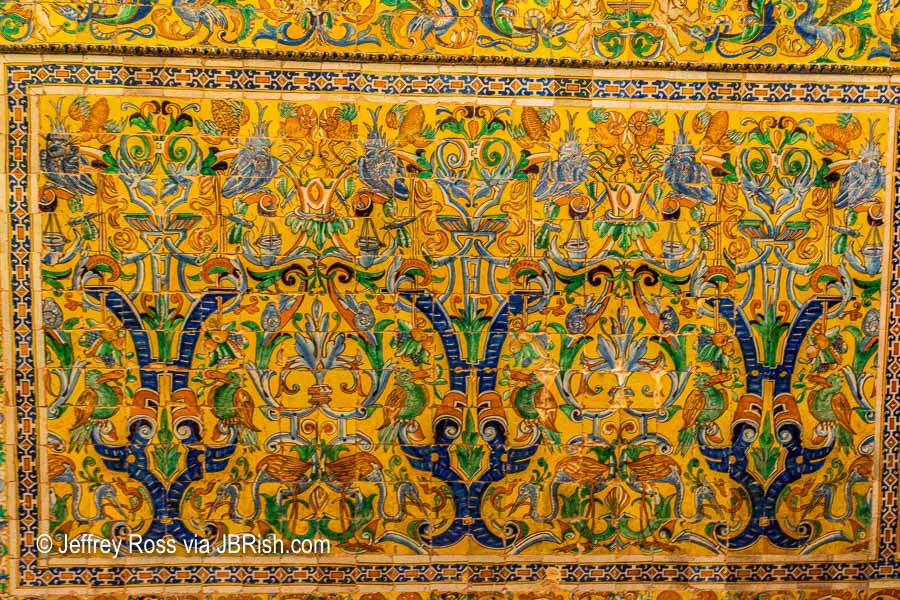 And then there was this wooden, door-like panel with a Moorish design… 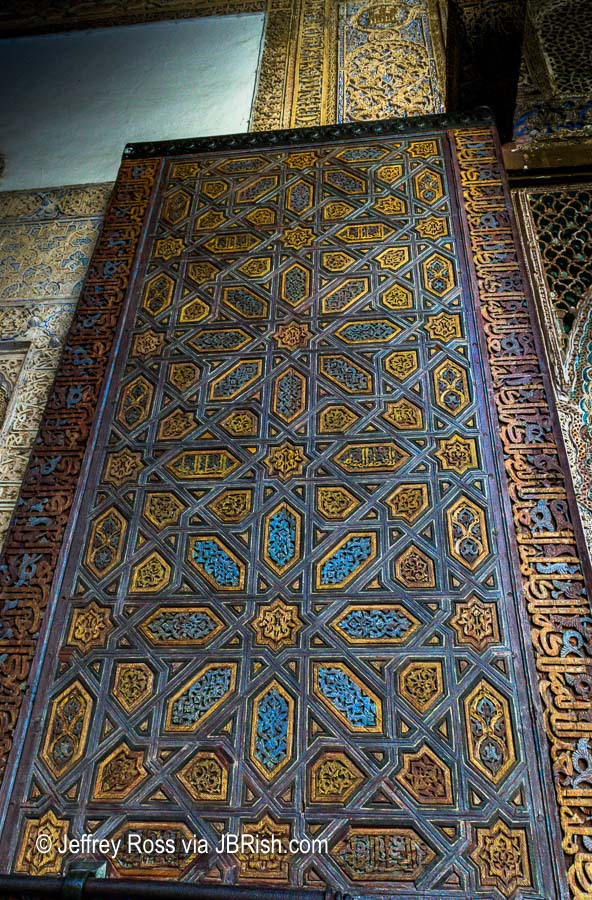 Once again, much like a child in a candy store, there was almost too much to take in at one time as we came to displays of beautiful tapestries. This tapestry was hanging above a doorway in the hall of Charles V. 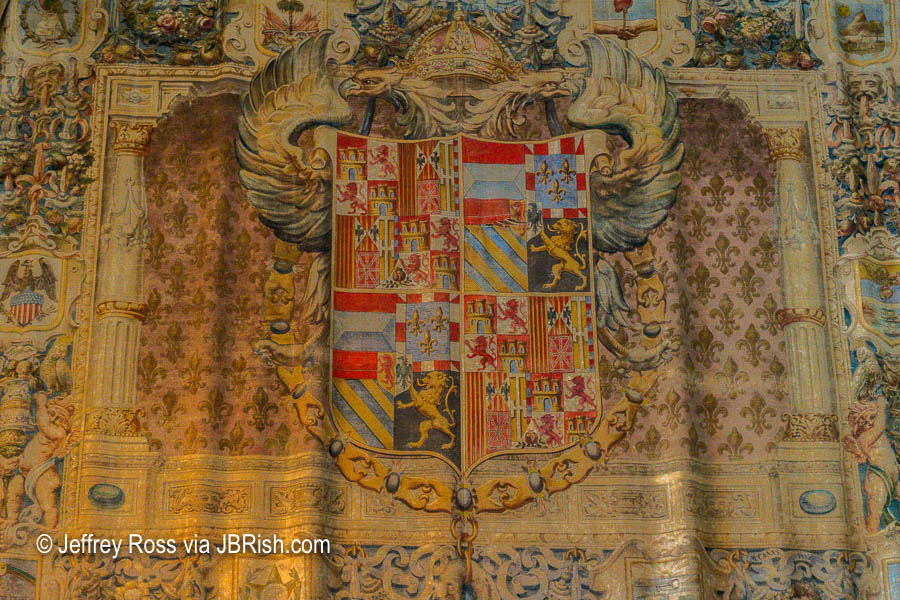 Here is a better picture of the entire hallway and notice the tiles and additional tapestries along the wall.

In the Sala de los Tapices (Room of Tapestries) the walls are covered with tapestries depicting various explorations and conquests. The originals were destroyed and these are reproductions. The Tapestry Room had to be built from scratch after the Lisbon earthquake of 1755. [3] 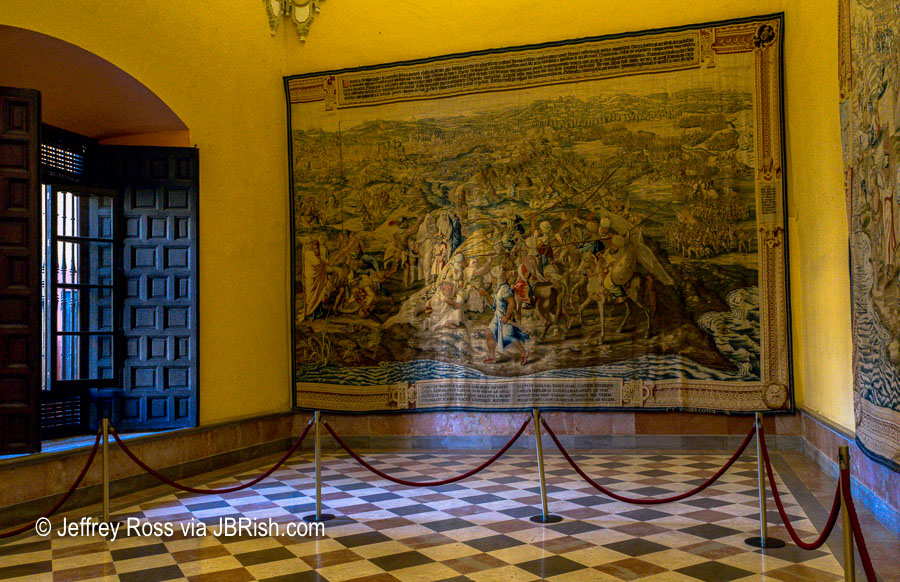 Don’t forget to look up. The ceilings are also works of art. 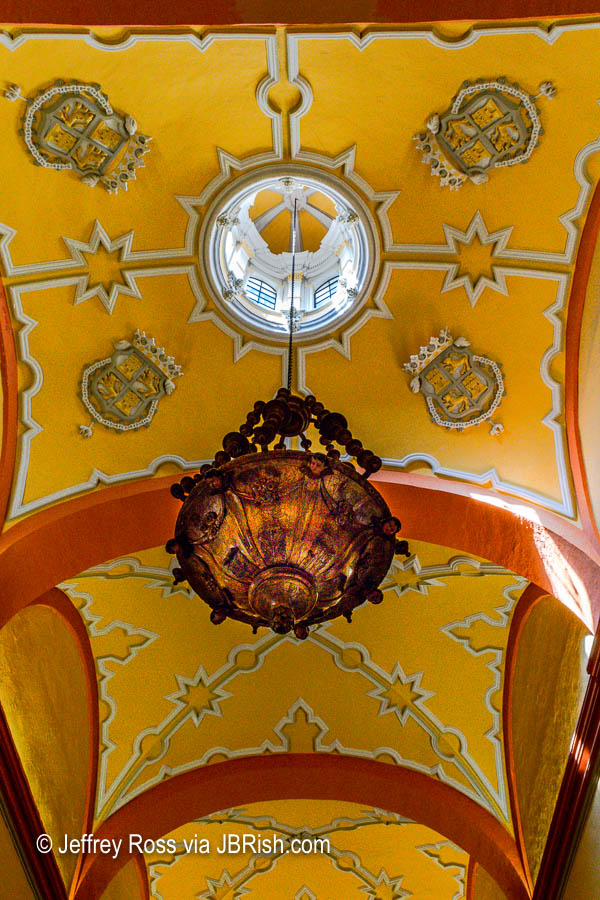 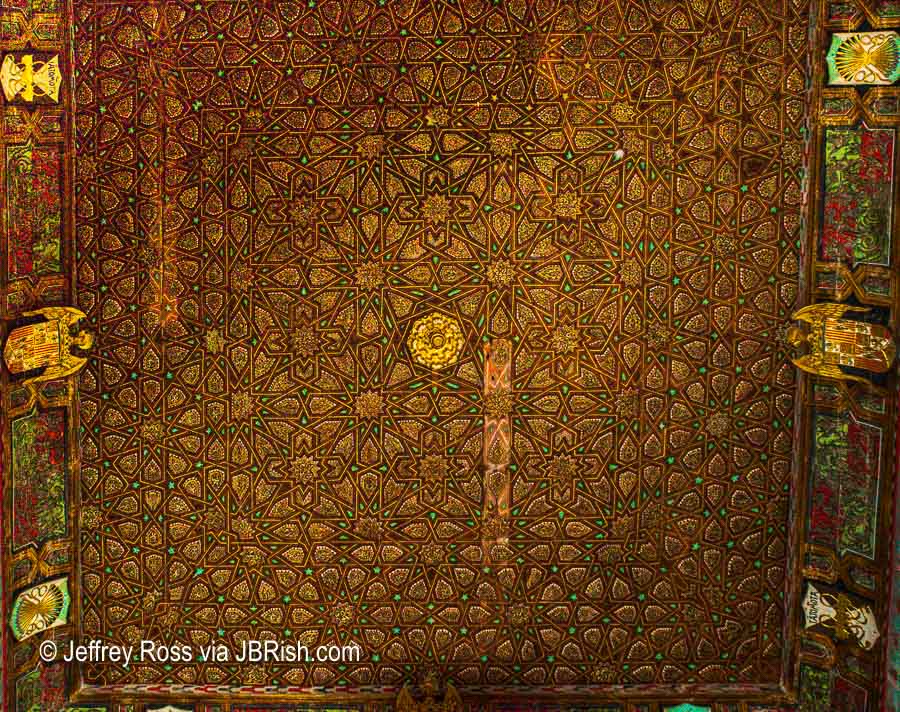 As we walked through the palace, there were some striking rooms that looked out on to the vast gardens. 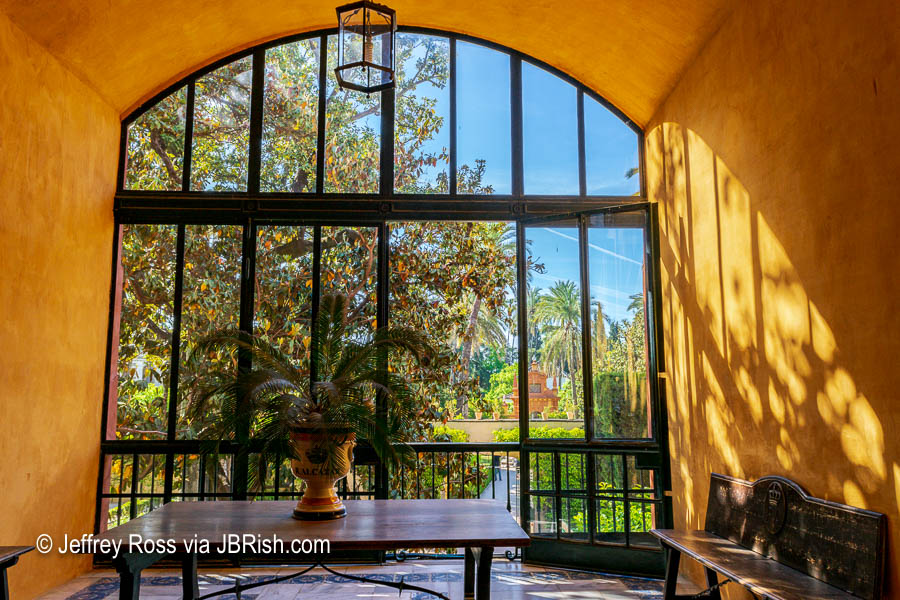 One of my favorite spots in the garden was this curved tile bench with a hedge mimicking the outline. 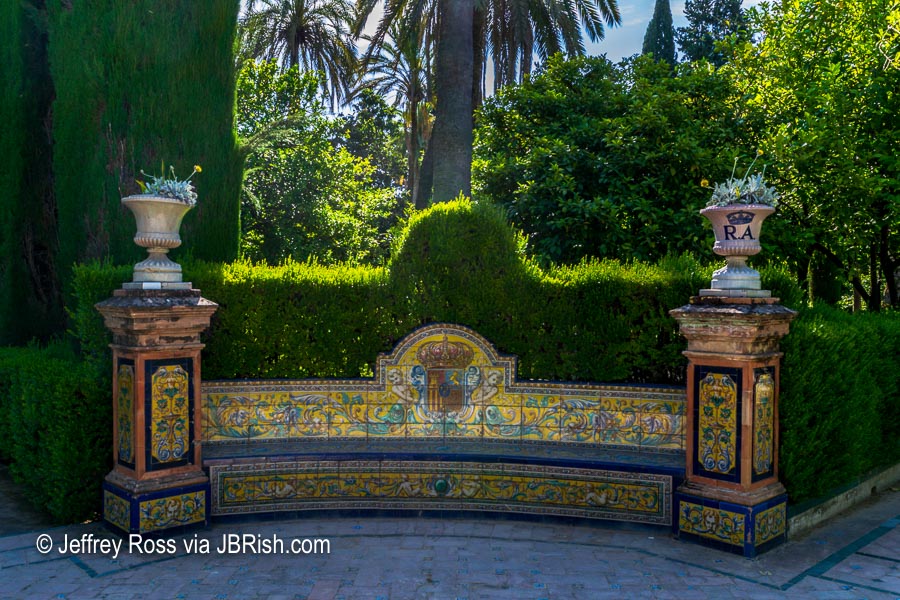 There were a myriad of intersecting pathways to explore leading visitors to roses and other beautiful plantings. 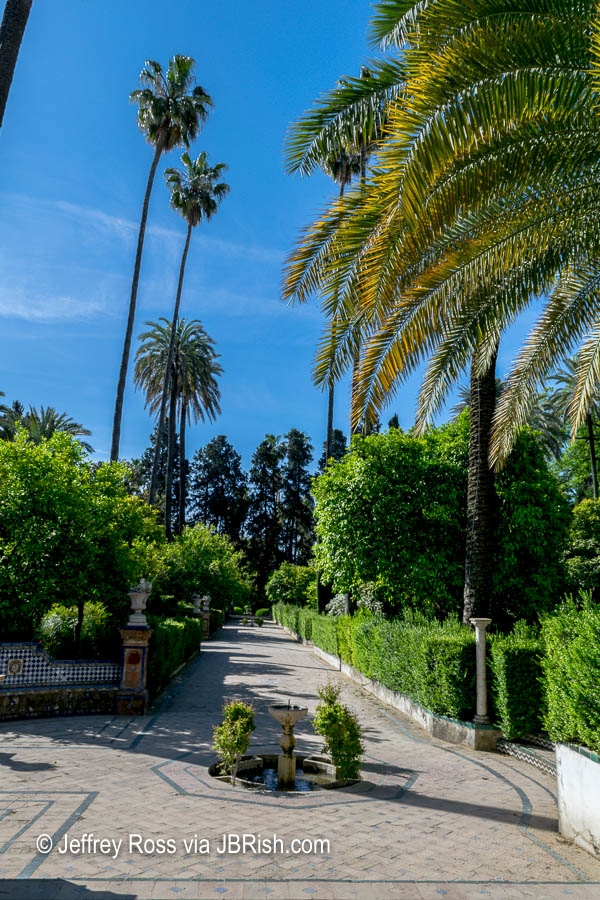 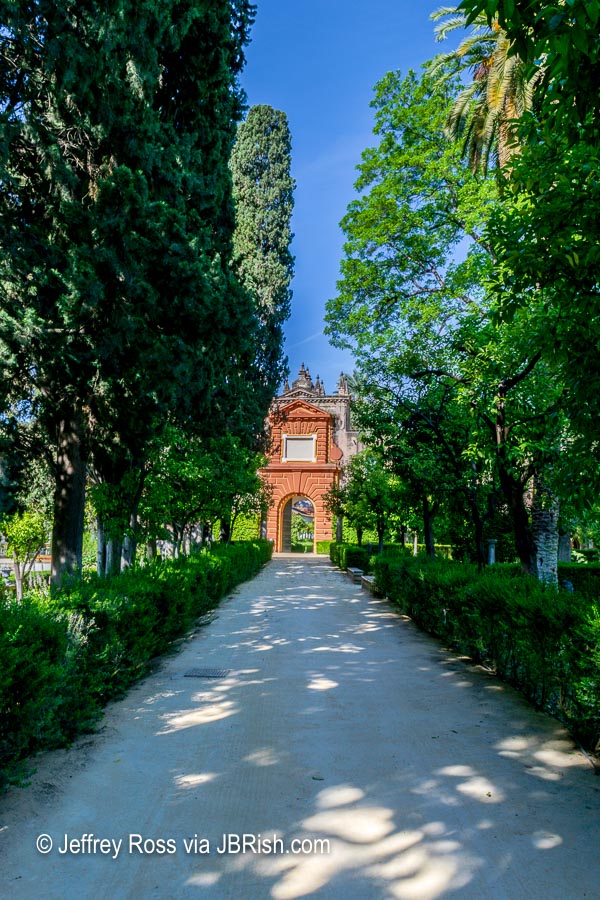 Did I mention they have peacocks? 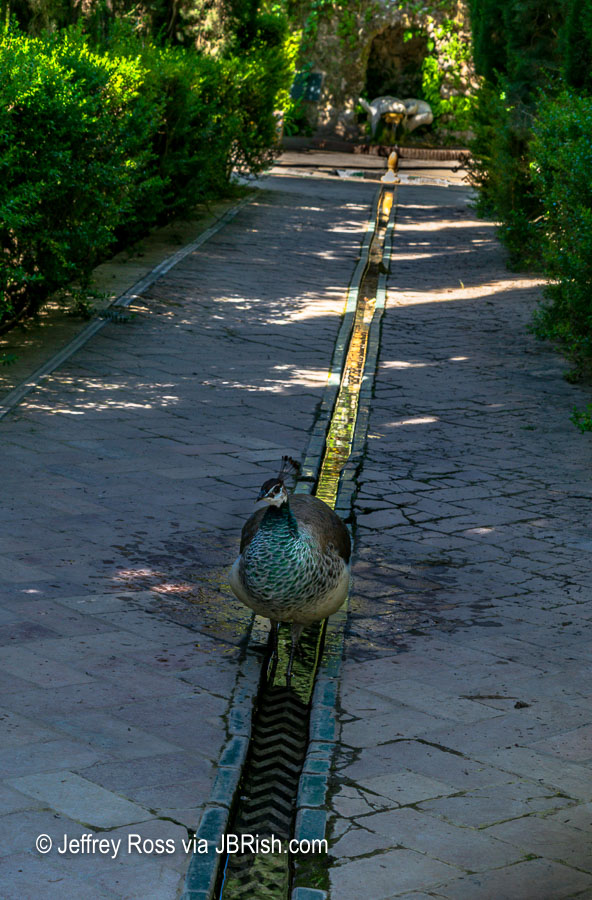 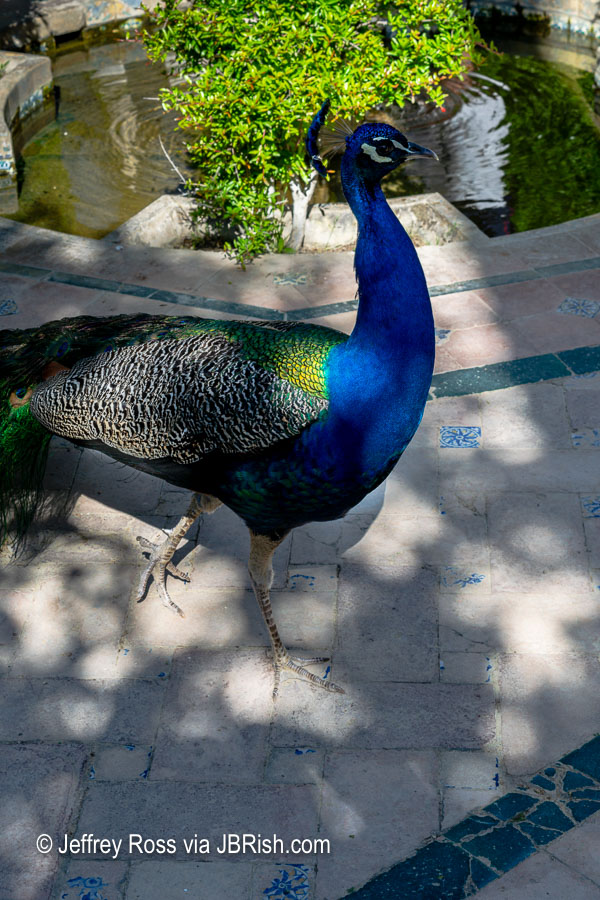 As we left the gardens we used a beautifully carved portal near the Jardín del Retiro del Marqués. 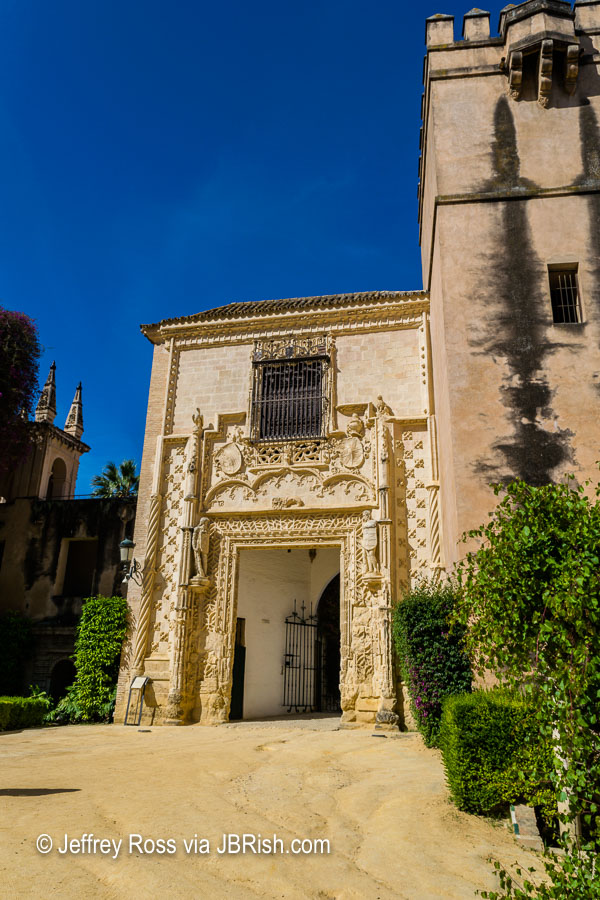 This is one place in Seville where the more time a visitor has, the better. It was hard to see all of it while on a schedule with other planned stops!