When traveling with a tour company, one thing to be expected is early morning departure times as a matter of the daily routine. The goal is to see as many sights as possible and when appropriate, leave time for independent exploration.

We were up early for breakfast and departure on May 10, 2018 when we left Lisbon, Portugal for Sintra. The morning was cloudy with scattered showers as the group disembarked the bus and walked to the center of town. The streets are very narrow and large vehicles cannot stay in the central area. 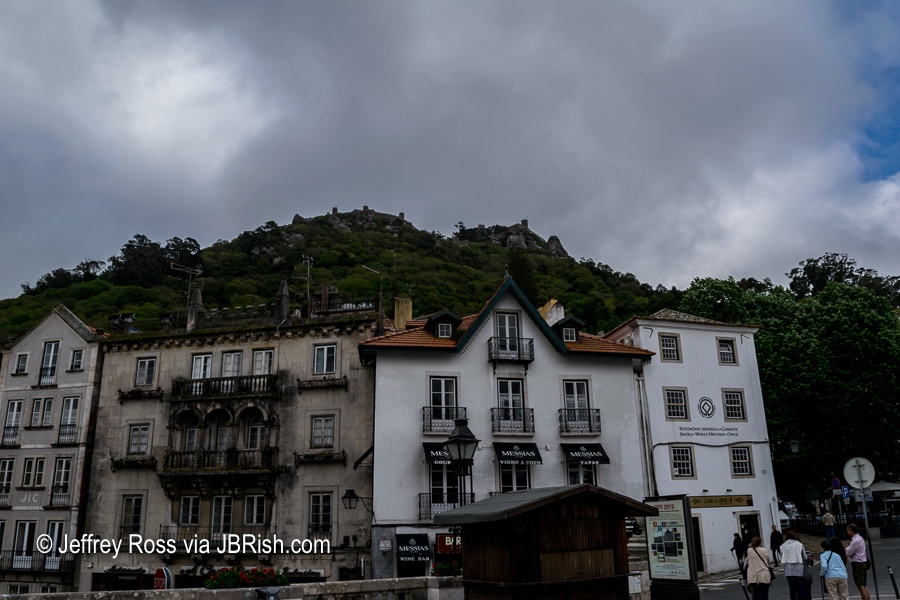 A gloomy morning in Sintra

The main attraction for our group was the very well preserved National Palace of Sintra which dates back a thousand years or more. It is mentioned in many historical documents and fell under Portuguese rule in 1147 when the city was conquered by King Alfonso Henriques.

Like many of the old and ancient buildings in Portugal and Spain, there have been alterations and changes throughout its history as new residents took occupancy much like contemporary renovations for those who purchase a legacy house. After all, doesn’t everyone want the latest and greatest? 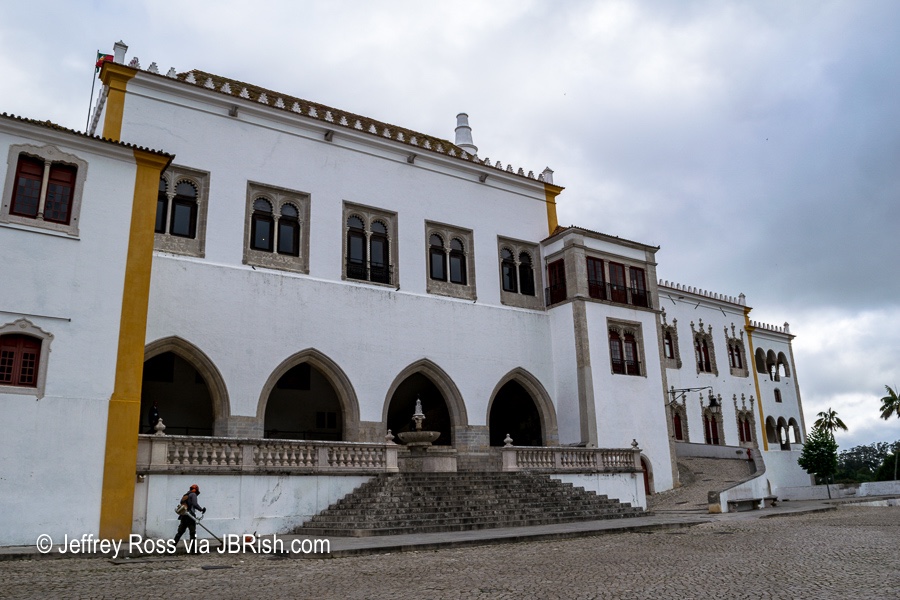 The National Palace in Sintra

The Sala dos Cisnes (Swan Room) generally used for grand receptions, banquets, etc. is one of the largest rooms in the palace. Of special interest is the painted ceiling which is composed of 27 octagonal sections each containing a white swan and from which the moniker of the room is derived. Looking closely at the paintings, tourists will note that each of the birds is different than the others and wears a gilded collar perhaps indicating the privilege of wealth. 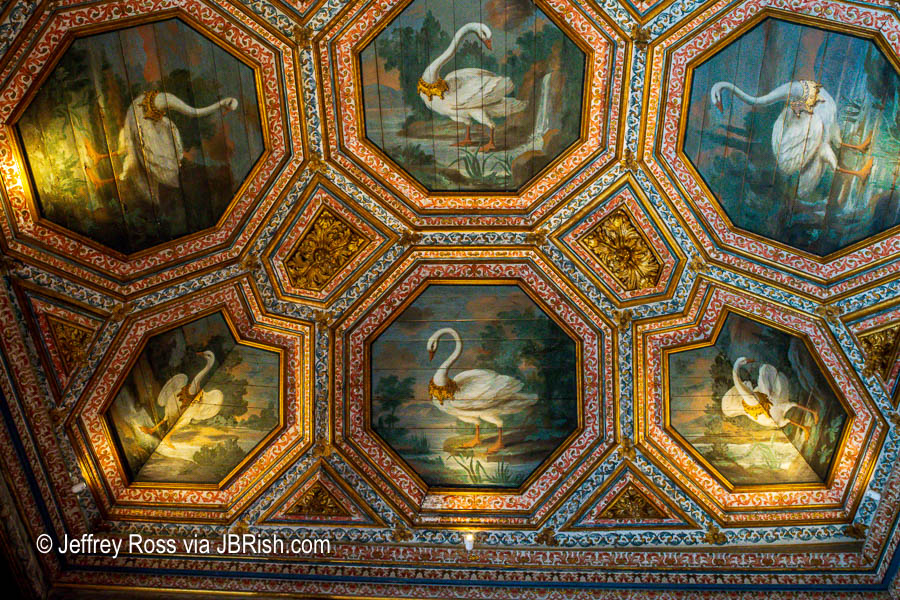 While walking through the rooms at the National Palace, we also noted the nearby beautiful and colorful mountainside … 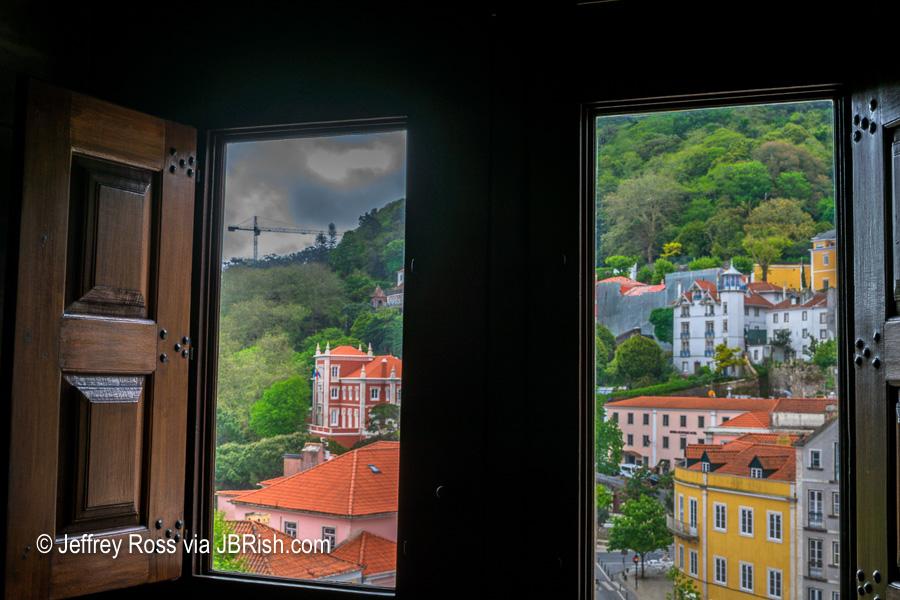 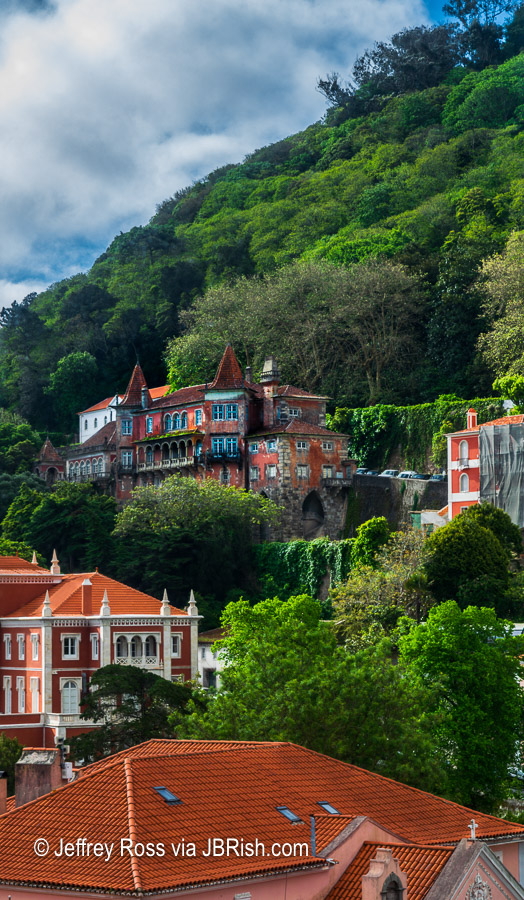 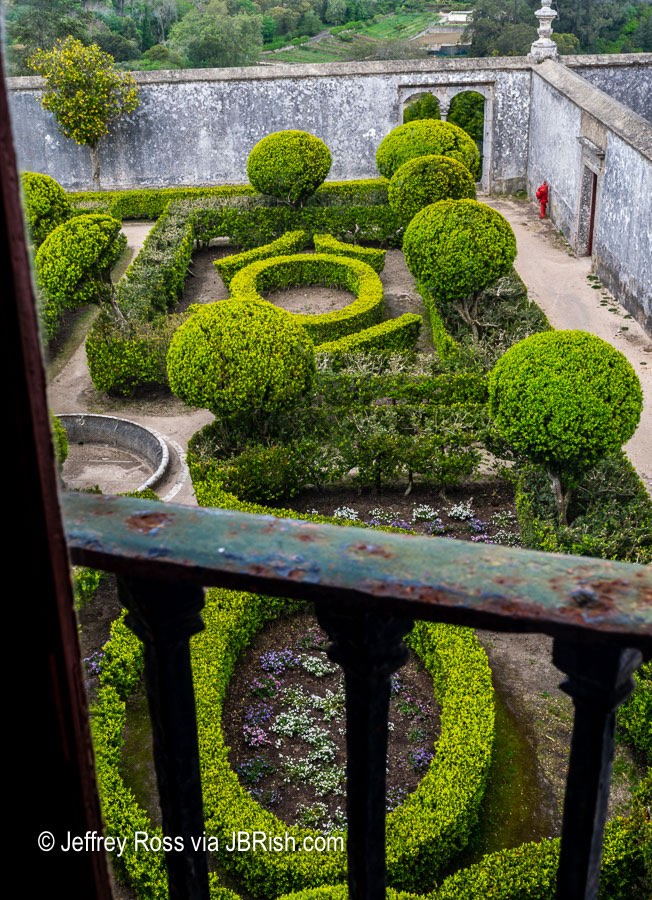 Portugal has been known for its Hispanic-Moorish tile work and there were abundant displays of this tile artistry throughout the building. Some depicted courtly events and hunting scenes. 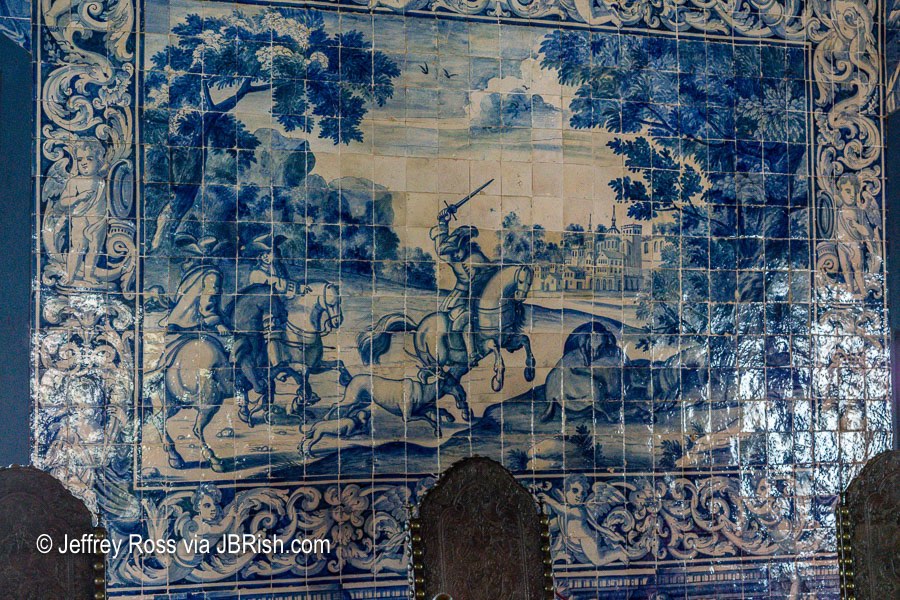 Here is a closeup of one panel. 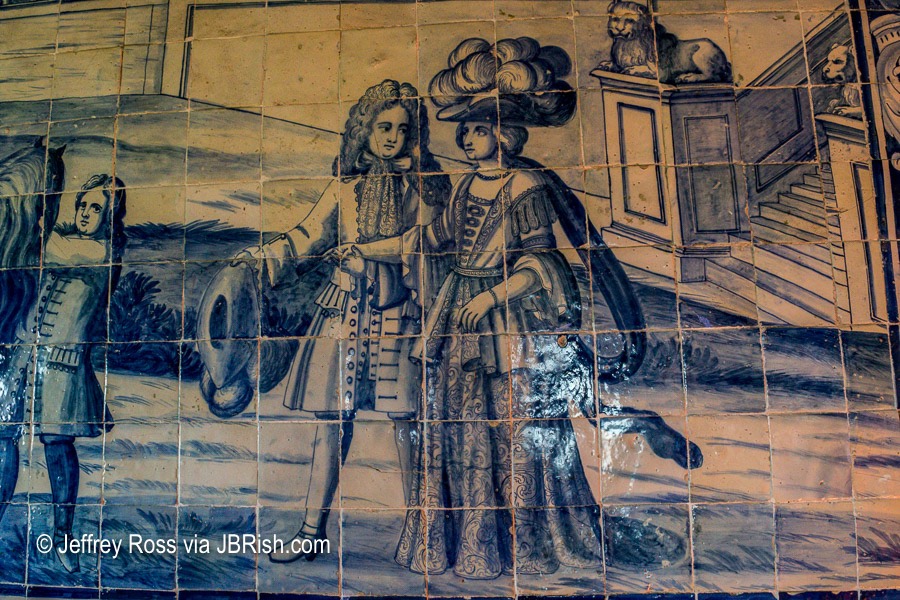 We cannot judge this art form by standards we have today because technologies and techniques are much different. The difficulty of working with tiles to create a scene is that the tiles don’t always meet in the most appropriate and best-fitting manner. The tour guide pointed out how the seam-lines in the section below somewhat mar the face of the woman in the panel. 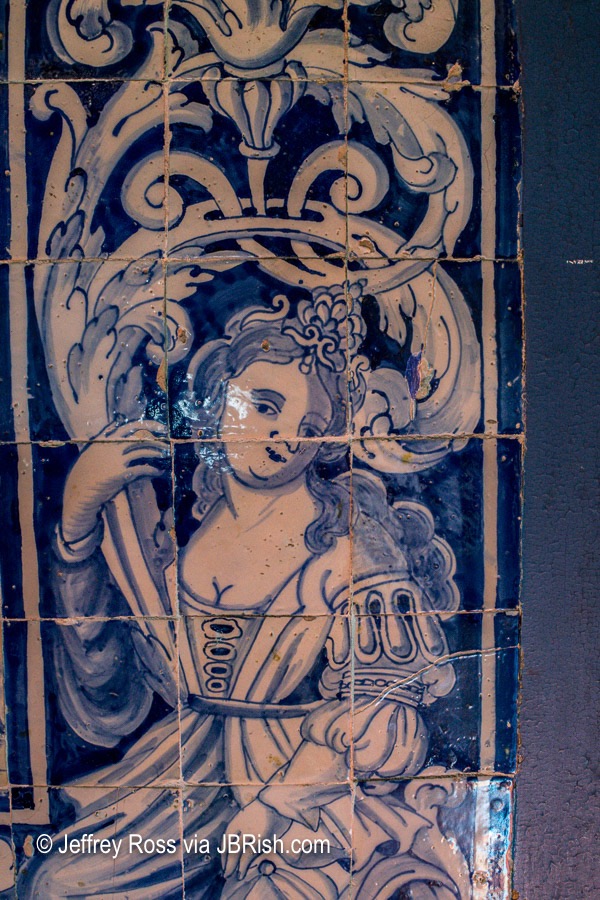 There were many kinds of beauty to be viewed in the National Palace. Some of them were more subtle while others were quite opulent. The Coats of Arms Room (Sala dos Brasões) is said to be located at the highest point in the palace. The center section of the ceiling pictured below shows eight panels each of which contains one of eight coats of arms of Portuguese royalty. The gilded artwork was quite impressive 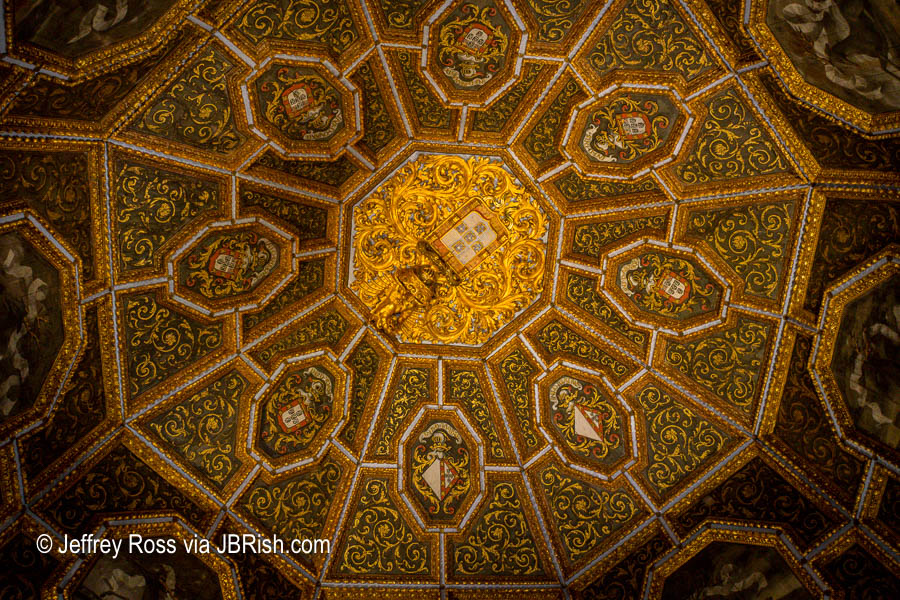 The Palatine Chapel (below) captures visitors eyes immediately upon entrance as the offset square fresco pattern of white doves with olive branches resting on a light, reddish-brown background draw the eyes to the chapel’s altar. 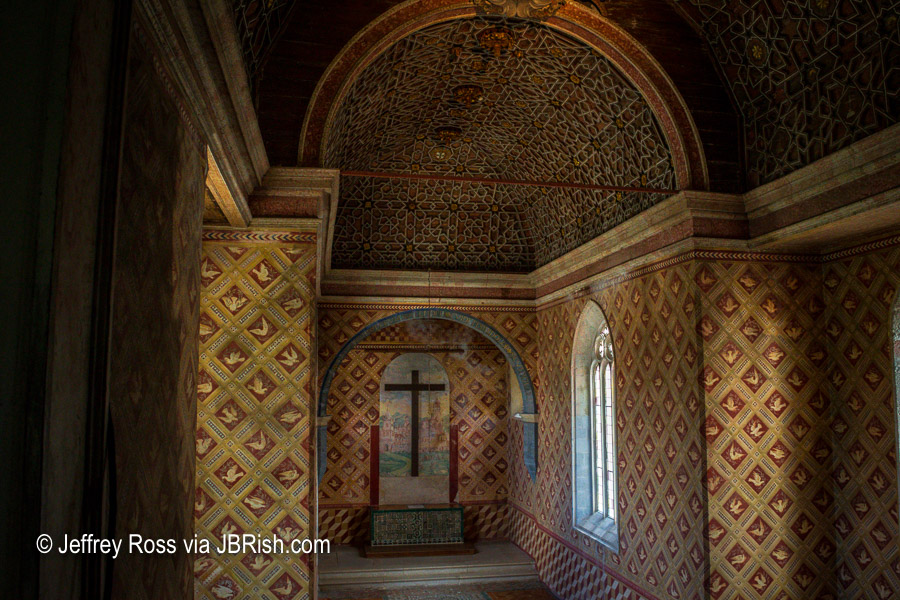 The architectural artwork in the palace had numerous unique elements. Manueline Hall was obviously a very formal room with a sizable chandelier. Archived pictures show that a large table is often placed in the middle of the carpeted floor area although absent during our visit. What impressed me almost as much was the amazing stonework rope design around the entranceway. 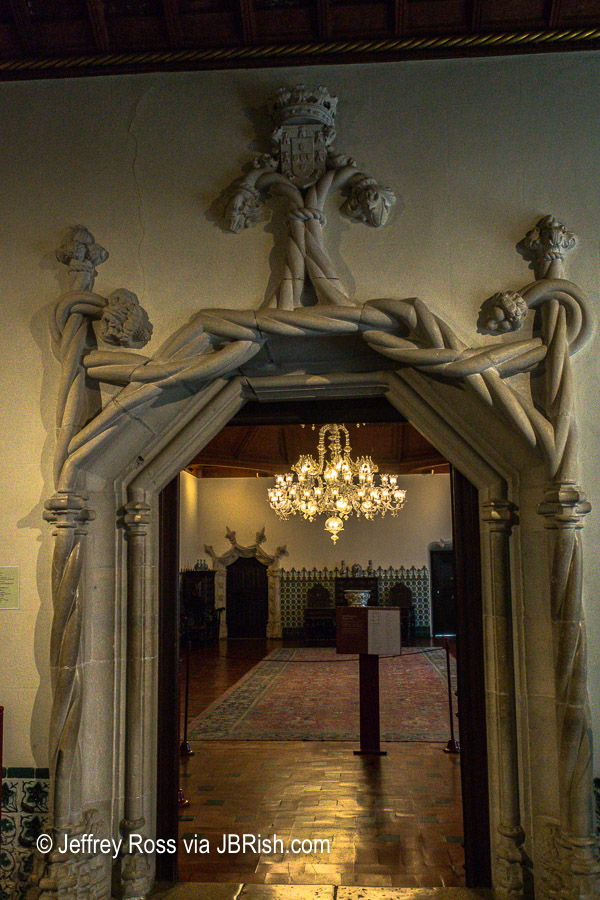 Another example of the tile work in the palace is shown below. The corn (on top) is used to symblolize success and prosperity. It may be hard to visualize, but sections of the tiles are created in relief, i.e. three-dimensional. 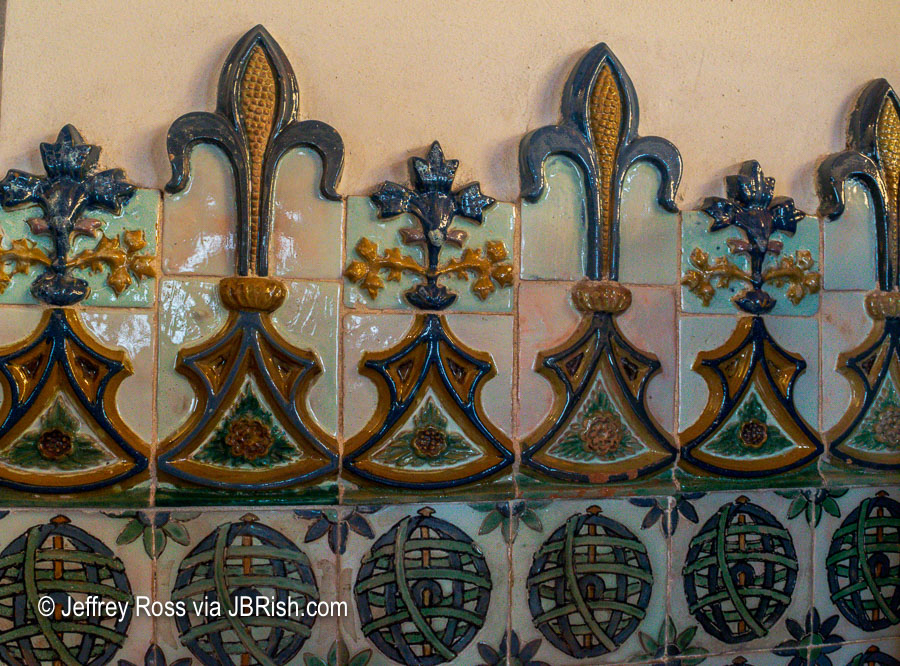 Seeing the various rooms and learning about their history was interesting, but I was also drawn to look out a number of windows to view the colorful and aged courtyards with their planters, staircases and interesting designs. 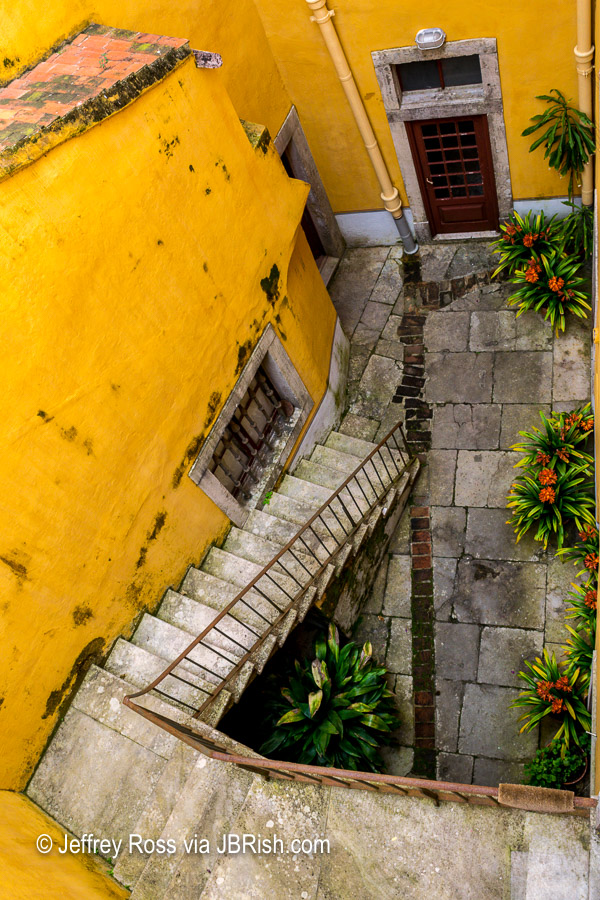 One of the last areas visited in the Palace was the large kitchen which was restored in 2016. 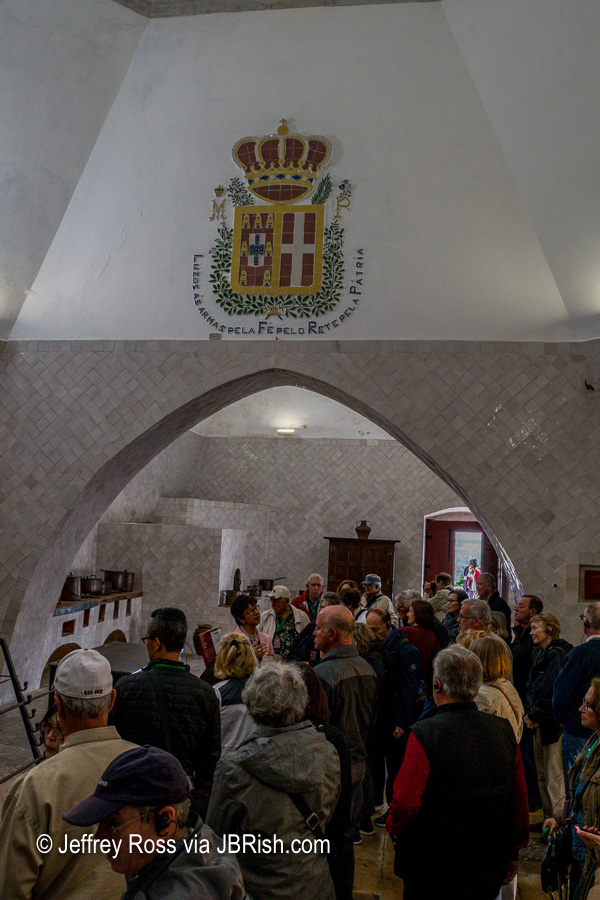 You may have noticed the huge coat of arms above the main archway leading into the kitchen. 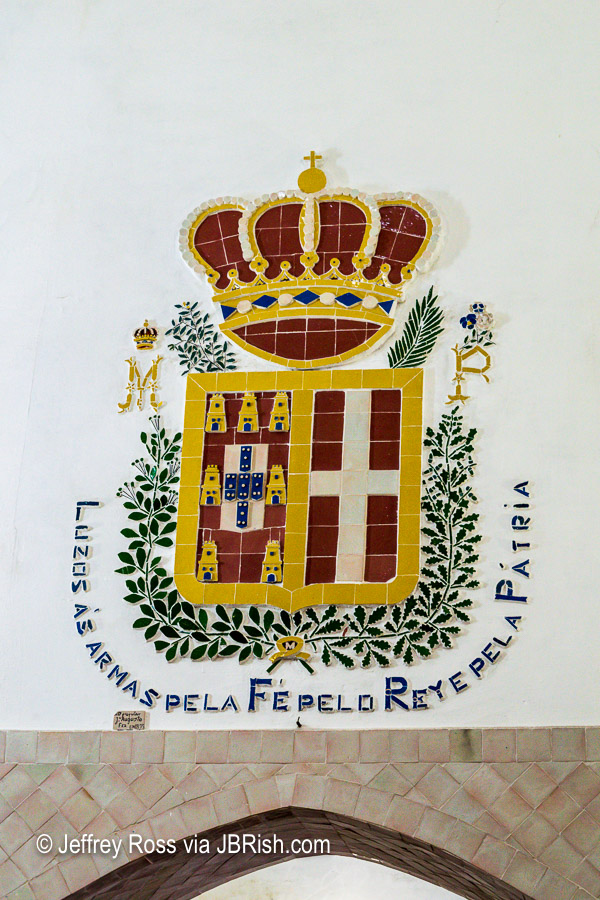 The kitchen was tiled in a manner that might be considered more traditional according to today’s standards and was the main focus of the 2016 renovation as the older tiles were not adhering well to the underlying masonry. Everything was large in scale. Notice the size of the pots. 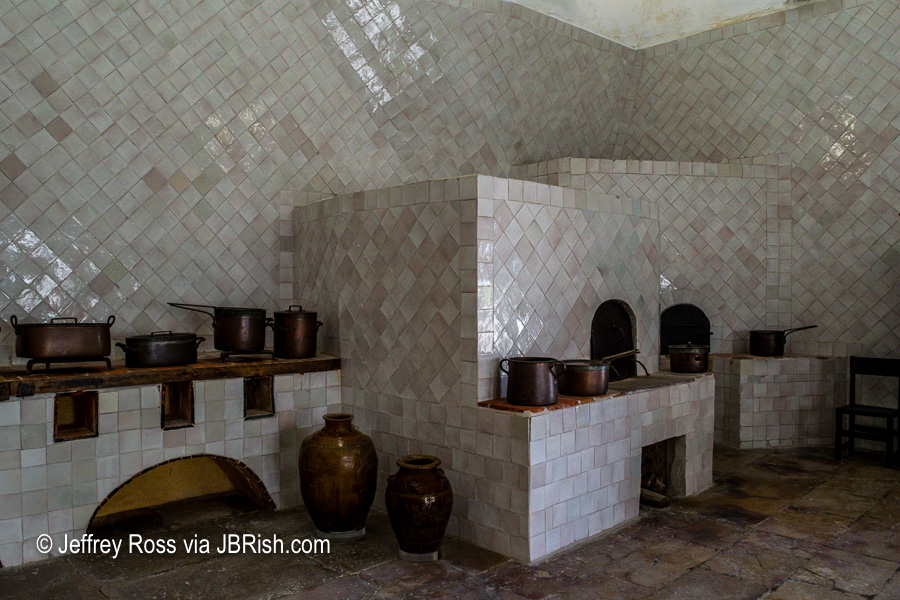 When cooking large amounts of food to serve hundreds of guests with the tools available at the time, there must have been a tremendous amount of heat in the kitchen and thus there are two massive chimneys 33 metres in height. The photograph below was taken looking upward through one of them. 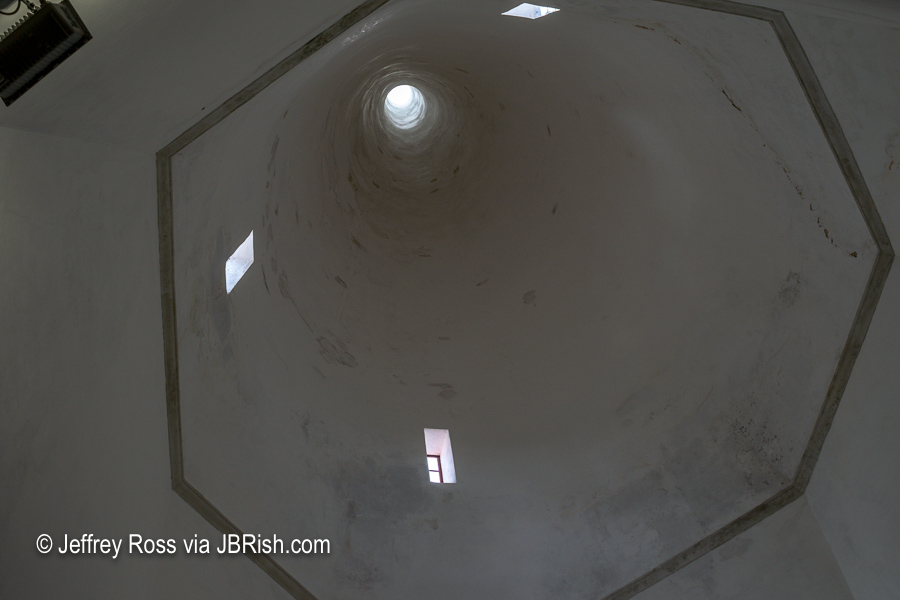 By the time the tour of the National Palace ended, the weather had changed for the better as indicated in the picture of one of the kitchen chimneys from across the street. 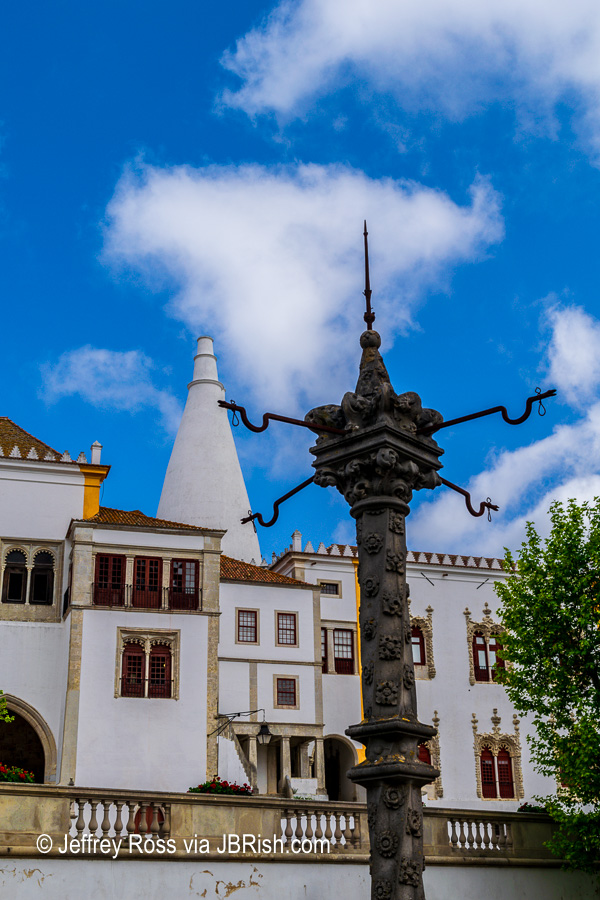 The National Palace was not the only point of interest in Sintra. The town itself beckons tourists to explore. Even the doorways exude an aura of Portuguese history. 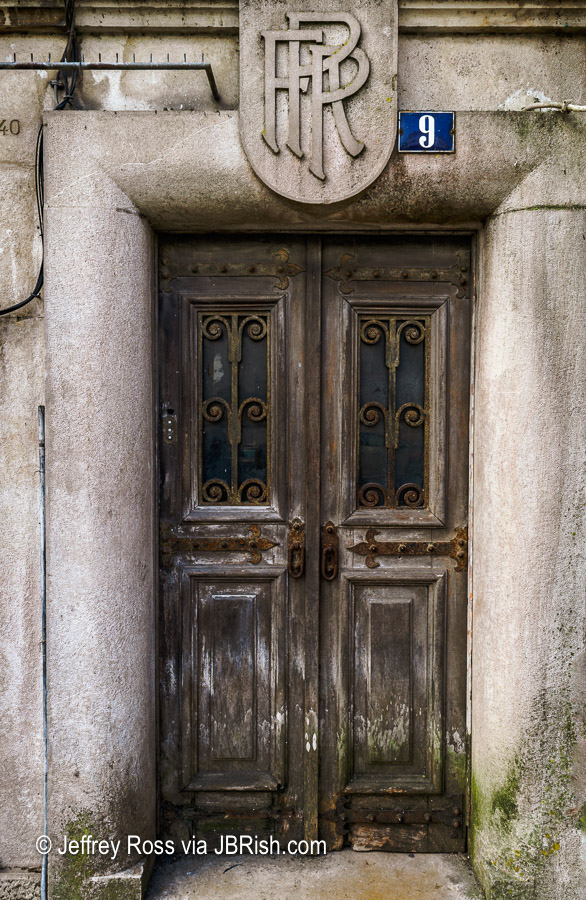 The beautiful plantings outside and colorful displays in windows of the shops were very inviting. The streets were paved with traditional cobblestones similar to those used in Lisbon proper. 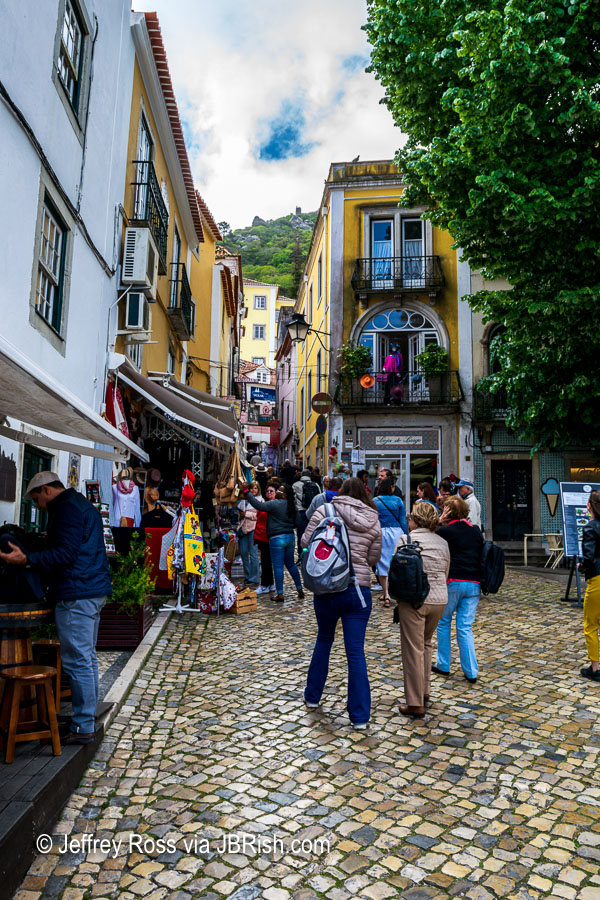 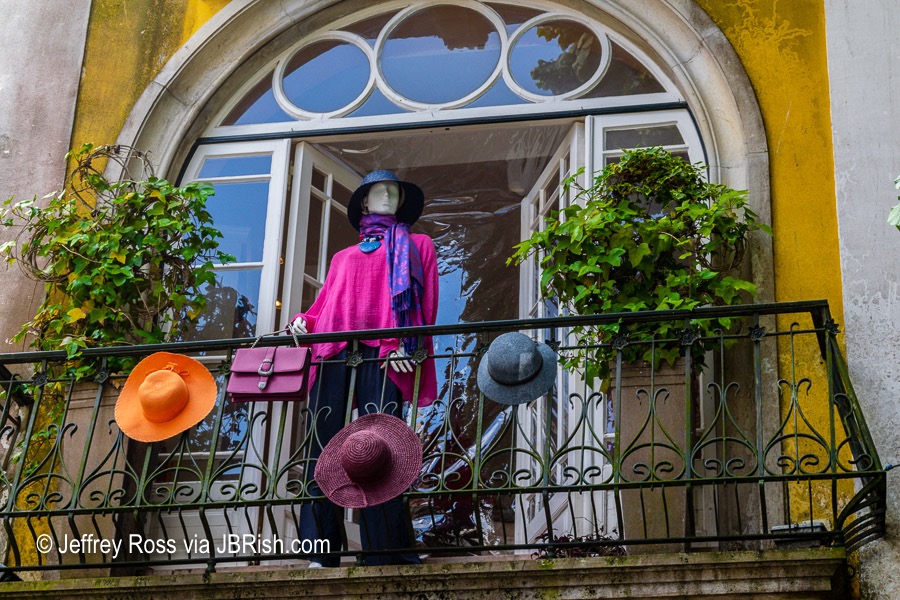 Here is a typical stairway in the central district of Sintra. 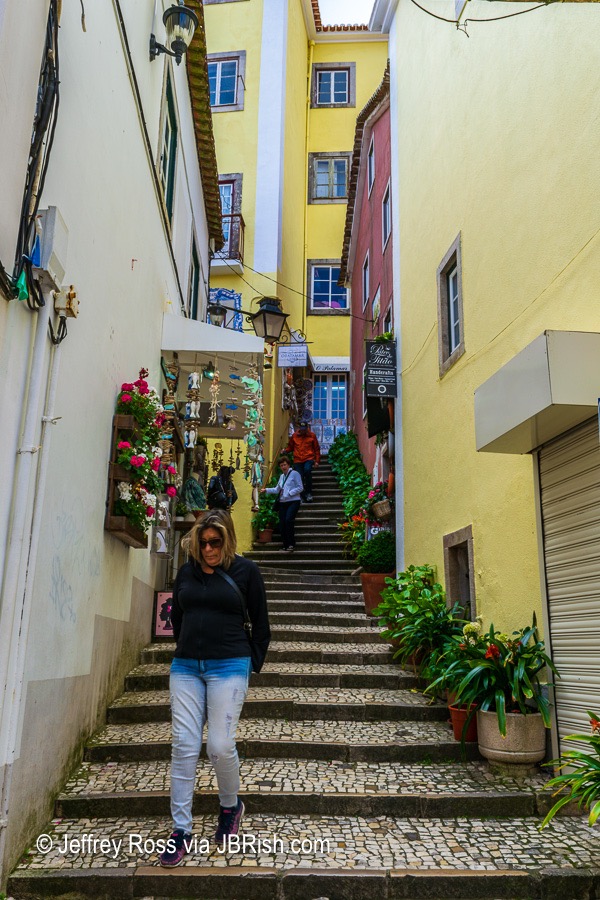 Along the side were large planters with specimen plants. 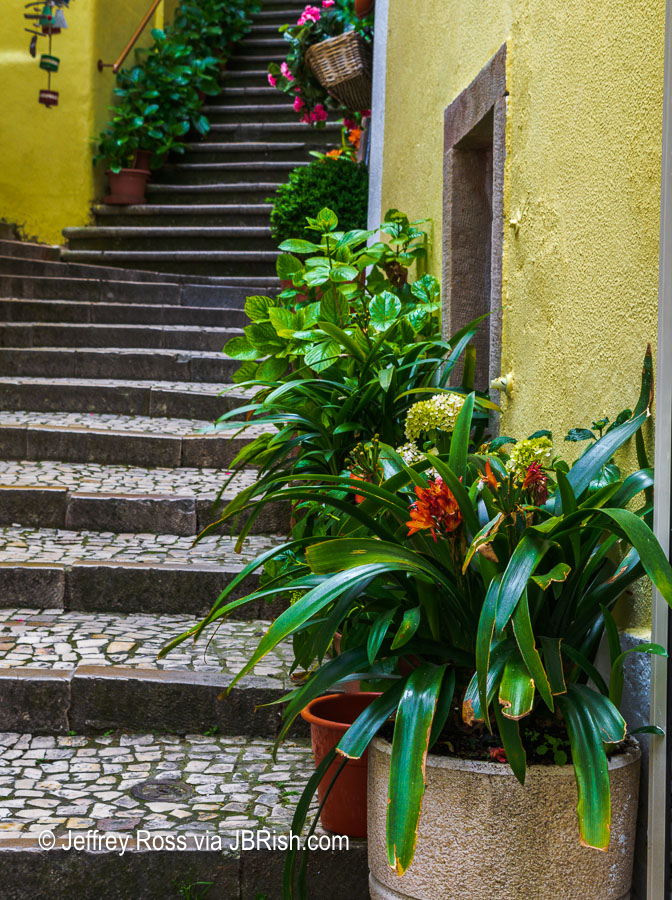 Geraniums were a favorite and festooned a number of walls along the pedestrian byways. 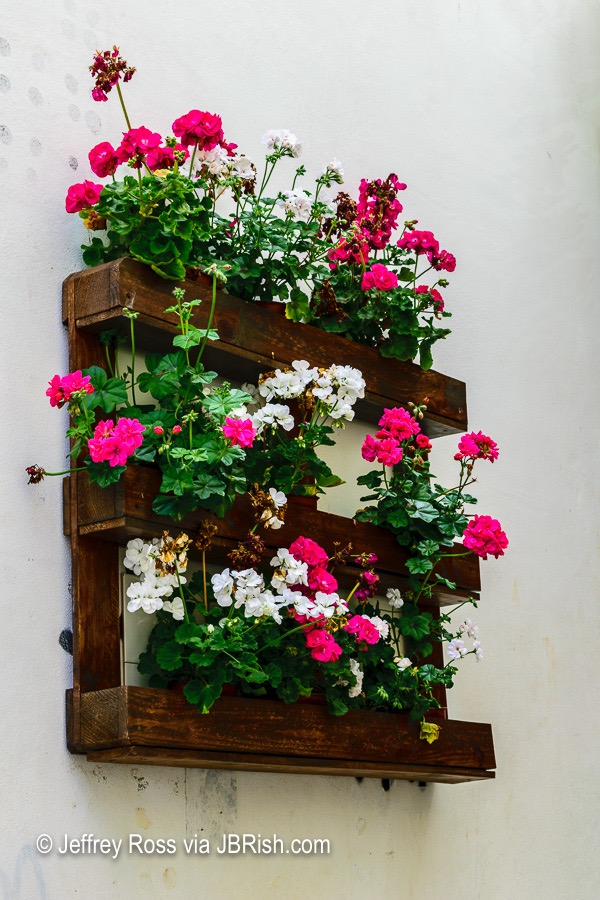 Wherever one travels in the world, there are street vendors and performers. This gentleman had a cart and as I watched him unload, it became apparent that he had a conquistador-type costume with him. 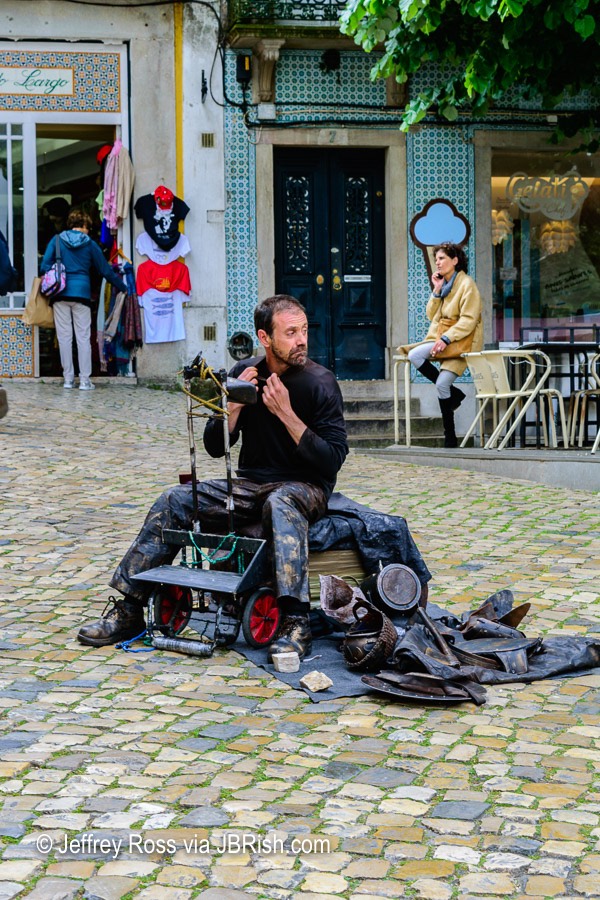 He began to apply a dark brown skin tone and adorn the accoutrements of a Don Quixote outfit perhaps with the idea that tourists would stop by to take pictures with him and pay a fee for the privilege. Unfortunately, we were called to leave before the transformation was complete. 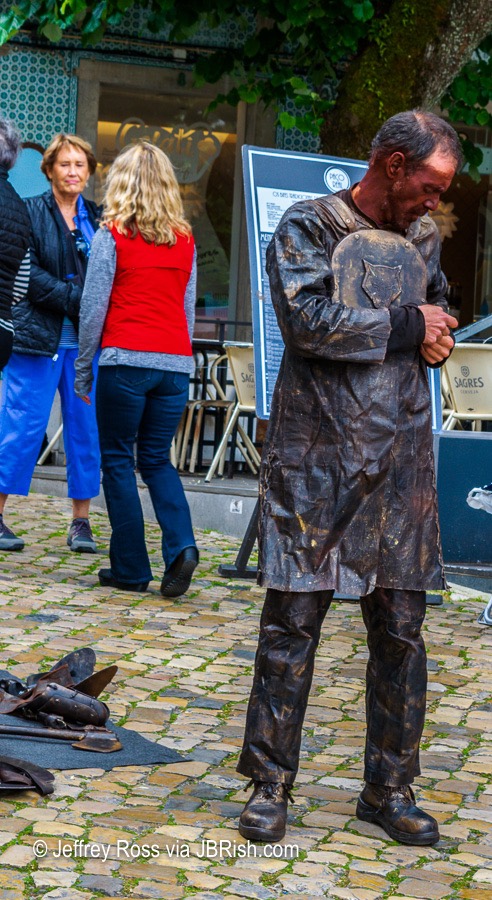