It was quite a while since we had a good dose of nature and the warmer than usual winter has given us added impetus to “go outside!” An opportunity presented itself which allowed us to combine two of our interests, bird watching and hiking. As I have explained on these pages before, I am an “occasional birder.” I enjoy birds and bird identification, but I am not ardent. I take it as it comes and it adds enjoyment to my wanderings.

We registered for a guided bird walk at the Hassayampa River Preserve in Wickenburg, AZ. This is riparian zone that has running water all year long; a rarity for the desert. As such, many birds are attracted to this wooded environment. The warmer temperatures have brought featehred visitors that don’t usually come this far south during February. 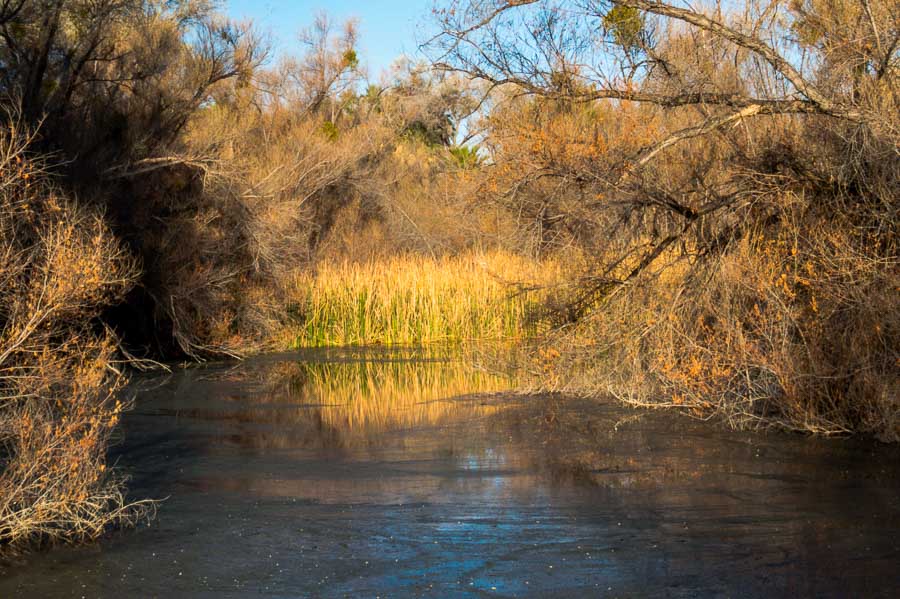 The inviting ponds at the Hassayampa River Preserve

If you have never done bird watching, then it may be difficult understand the highs and lows of the experience. There will be those in the group who see so many birds while you might be gazing at the leaves and branches and wondering: “What do they see?” or “Where is that bird?”

Below is an example of one of the frustrations. This bird appeared on the top of a nearby Cottonwood tree. It was vey much in view although quite a distance away. Unless an observer knew this bird from previous experience, it would be difficult to identify. 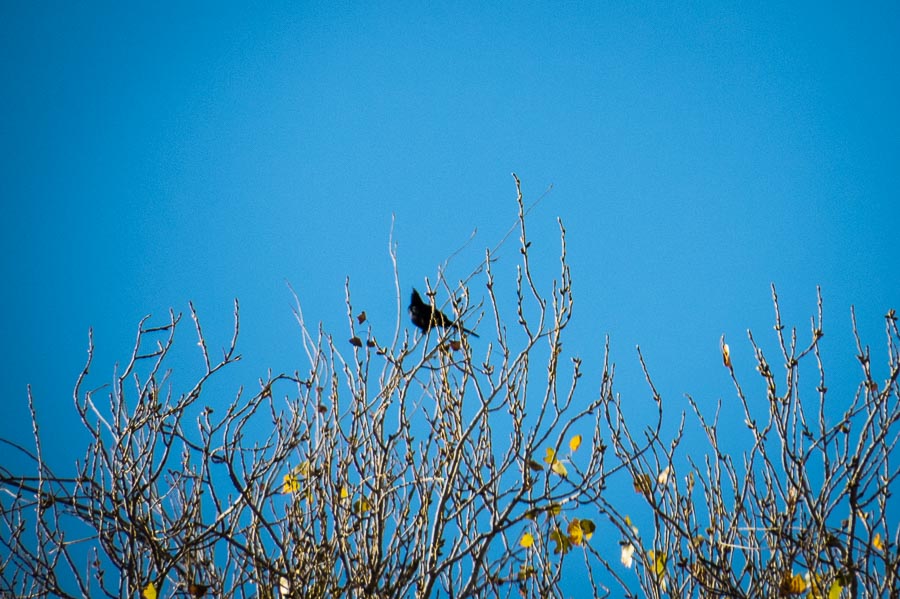 I had seen this bird several times before so I knew it was a Phainopepla. One distinguishing characteristic is its red eye which, because of the distance and lighting, was not visible. The black tuft on top of the head is also a distinguishing feature. I was able to get my best picture to date of this bird in November. You can see it HERE.

When I attended my first guided bird walk, I was surprised to learn that most birders don’t rely on sightings to identify the bird at first. They identify the call or song and then look for the specific bird. I must admit that this is a skill which mostly eludes me. I do know certain very defined bird calls like the Mourning Dove, Cactus Wren, Curve-billed Thrasher, etc., but all those chip-chip-chips and too-wees just escape my grasp. This is one reason I greatly appreciate having a guide.

The bird in the picture below, for example, was identified as a Ruby-crowned Kinglet. The birds are particularly difficult to identify and even more so to photograph. They jump around incessantly. Although this bird is totally shaded, the guide followed it from several trees and was able to identify it for us. I take her word for it! 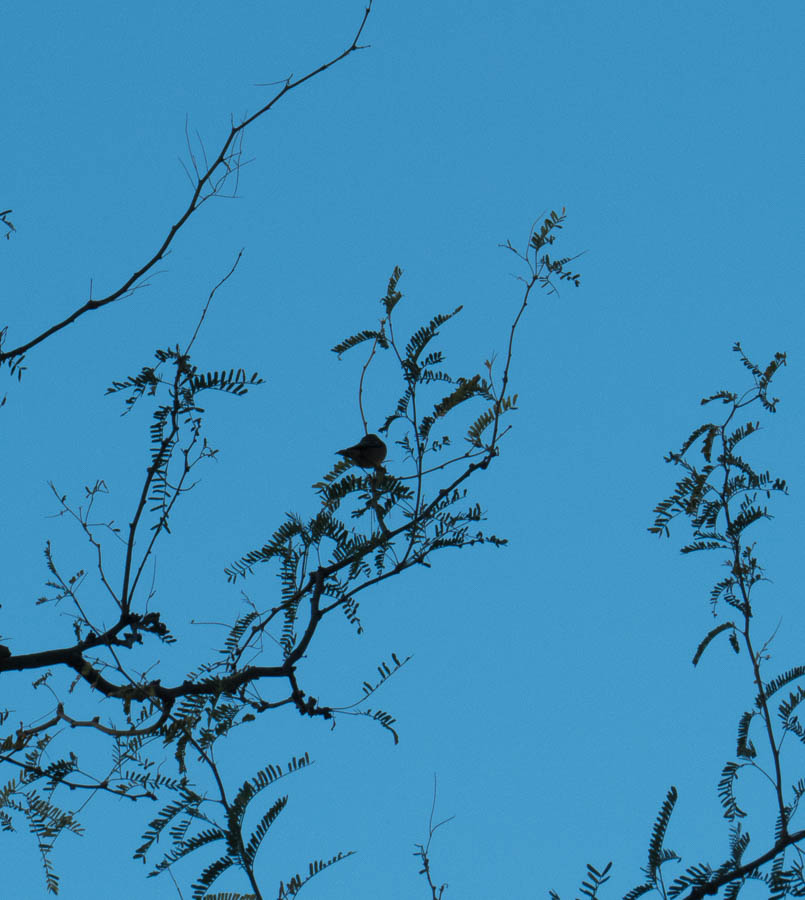 Another photo of the Ruby-crowned Kinglet. The most distinguishing mark of this bird is a red tuft on the top if the head. The angle, lighting and other factors did not capture this marking. 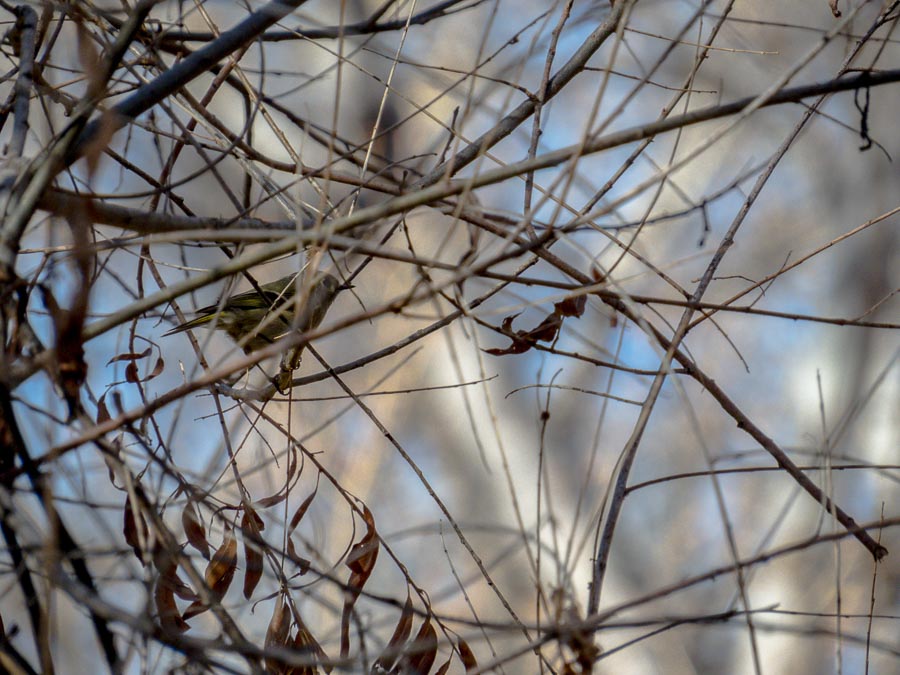 You can see much better photos of this bird HERE.

There were some birds that were more conveniently situated and thus more easily identifiable such as this Hermit Thrush. The problem here is that the bird has very distinctive spots on its whiteish underbelly, but as you will note, that characteristic was not clearly visible from the back. 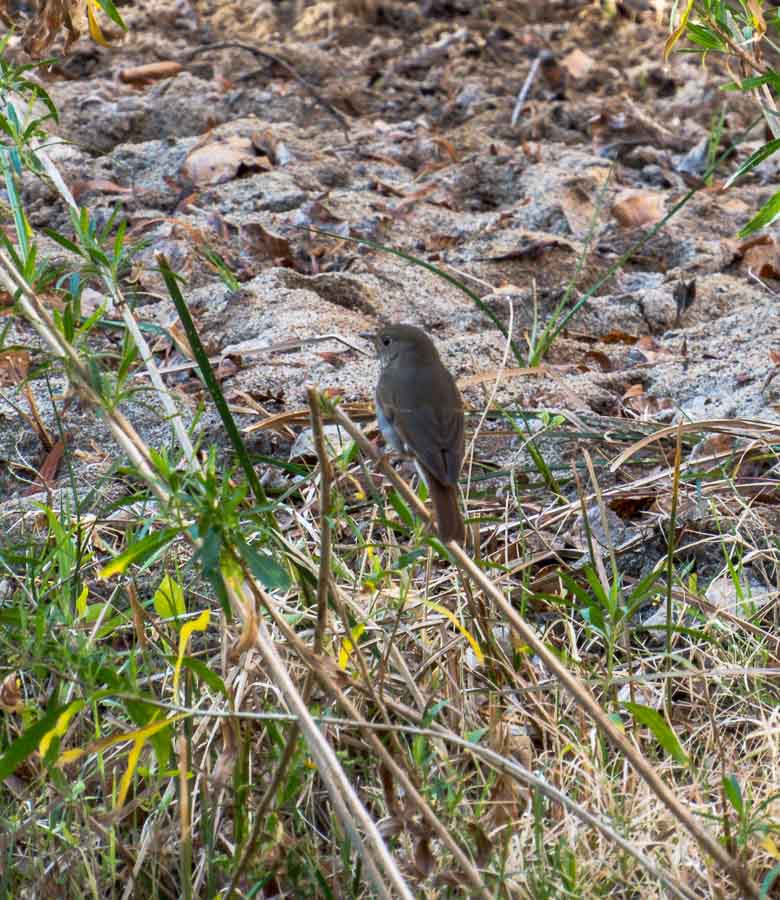 The lesser Goldfinches were a bit more cooperative once the morning warmed a bit. They would cling to the thin branches of a nearby bush and pose for a while. The trick here is to take a number of pictures as the autofocus (which I use for birding*) will sometimes choose to focus on a foreground branch and render the bird out-of-focus. 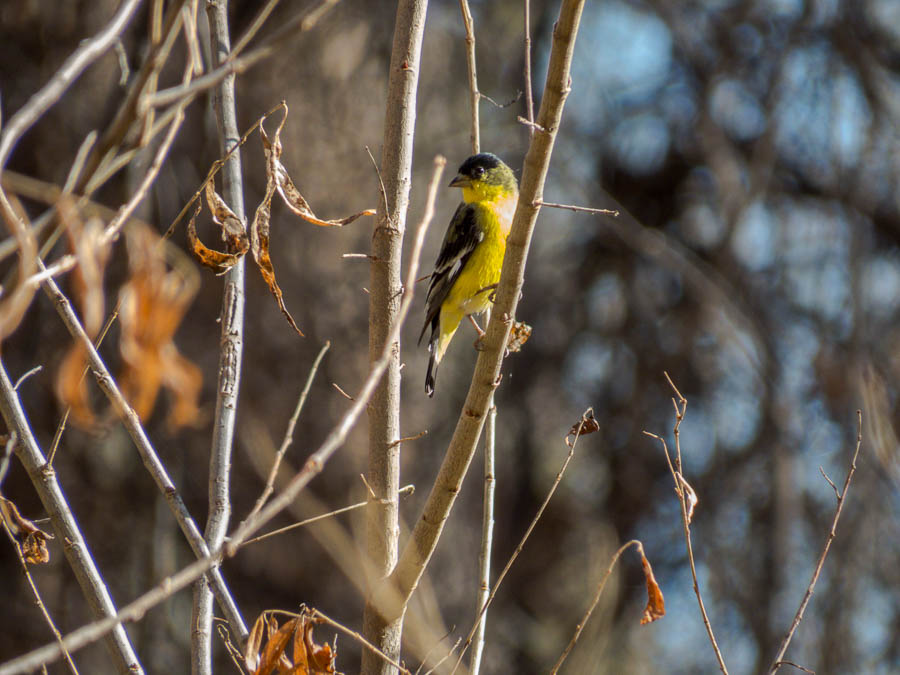 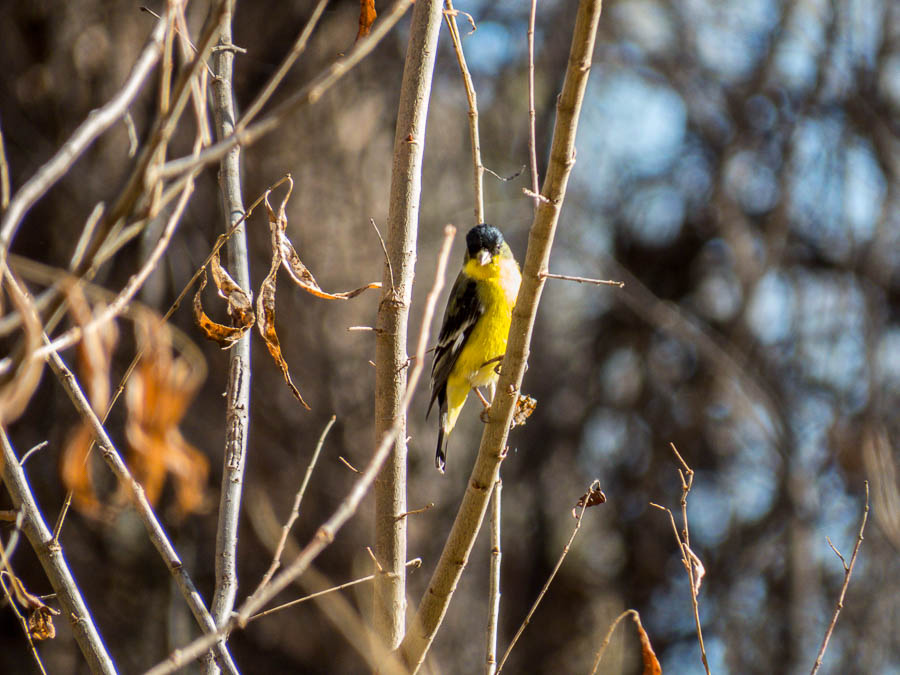 Black Phoebes often will flit away and then return to the same branch from which they flew so it may be easy to wait a moment while gaining focus on the perch and then snap the shot once the bird returns. The first shot has only the back of the bird, but it later turned sideways for a profile shot. 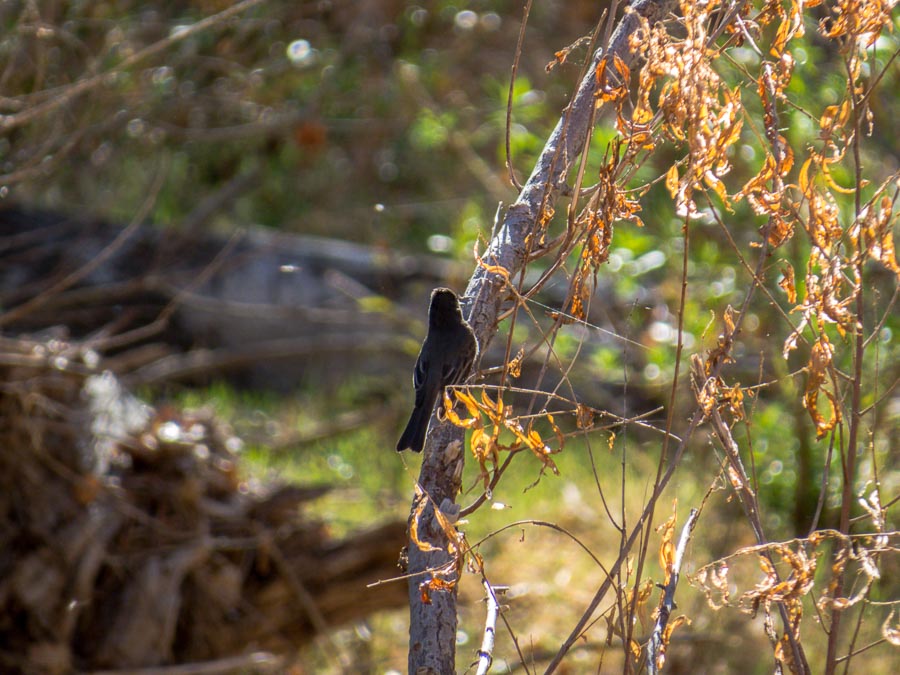 The next series is of a Ladder-backed Woodpecker. Woodpeckers, creepers and other similar birds cling to the side of trees and climb upward. They will then fly to a nearby tree and begin to hop while ascending that tree. It appears to me that they know when they are being watched and they scoot to the side of the tree away from the viewer so they can hide. At least it seems that way!

While the pictures are a bit blurry because the bird was madly pecking away, the distinctive markings are visible. 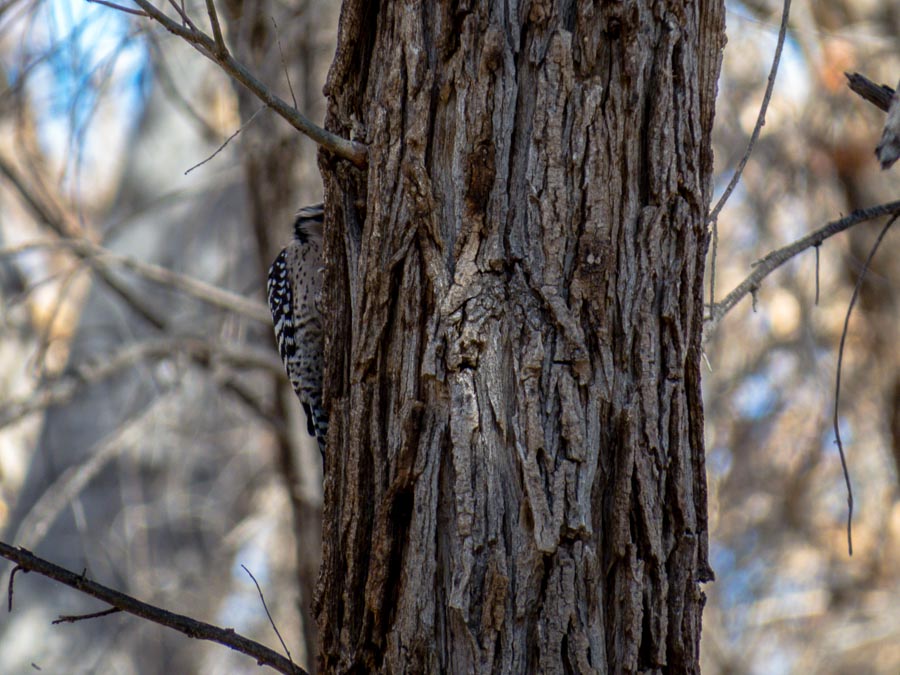 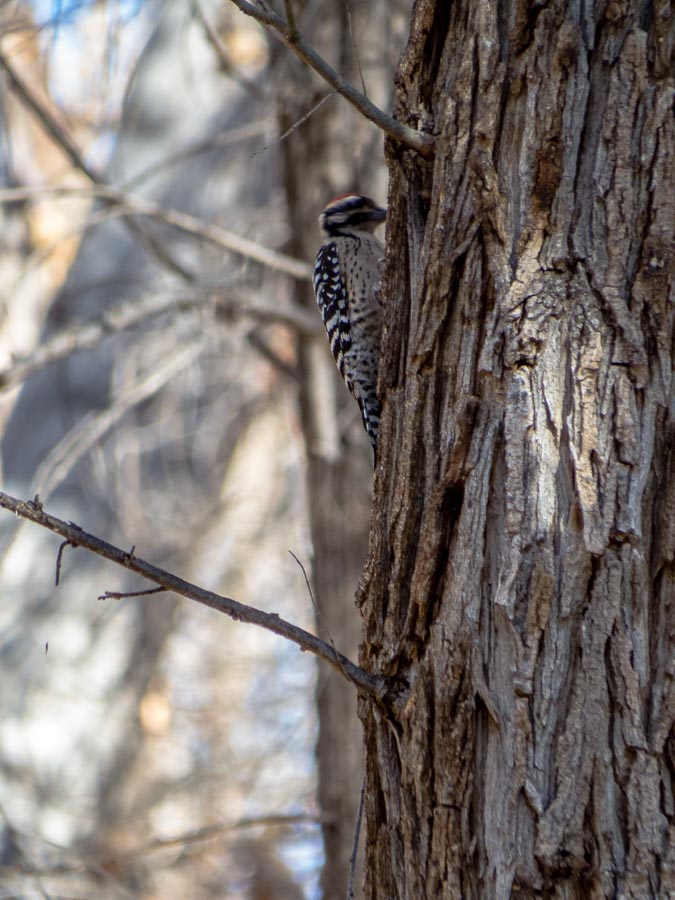 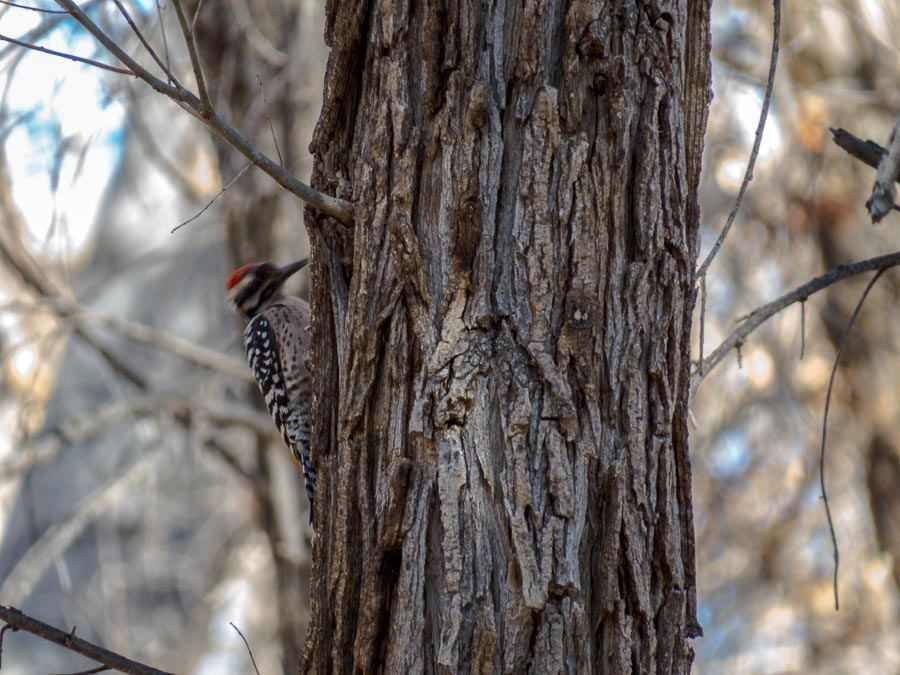 One last sighting before we left revealed three Western Bluebirds sitting on the same branch. They were catching the mid-morning rays of the sun. The blue of their backs does not show that well, but the rufous color of their underside is clearly visible. 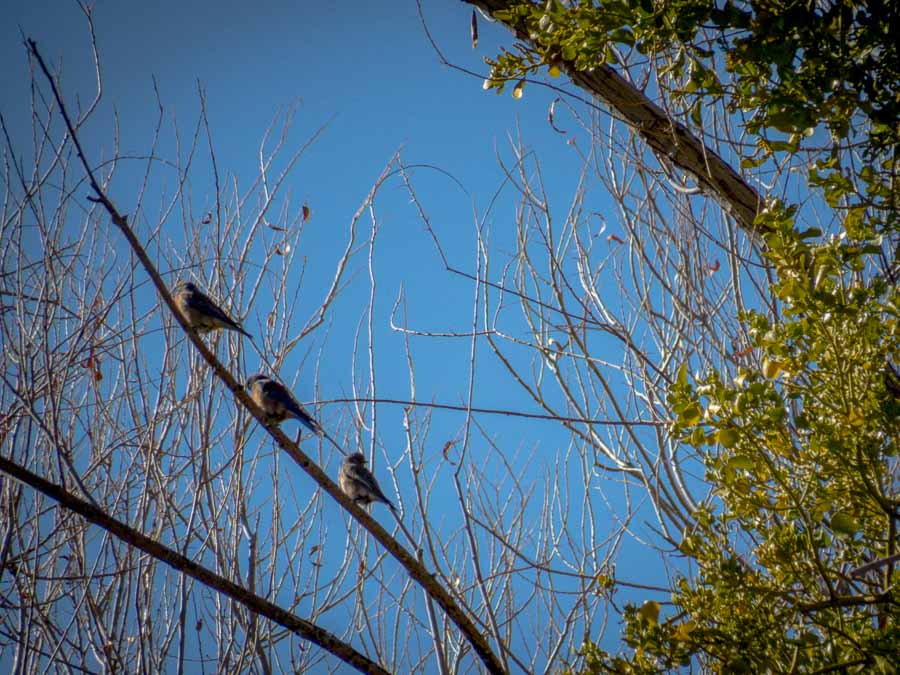 Additional sightings by me and others, but not photographed:

* NOTE – The only camera I used during this bird walk was my Canon SX50 HS which is a bridge camera with a telephoto zoom lens. Pictures are best at low ISO (200 and below) which limits the aperture and shutter speed. The aim of these photographs was not to capture beautiful pictures of birds, but to take pictures that would enable identification. Of course it would be wonderful to have an excellent photo along the way!

As a follow up to Part 1 of our bird walk at the Gilbert Water Ranch, in Gilbert, AZ I am posting some additional pictures and narratives. As you might expect at something called a water ranch, this is a habitat for numerous ducks and other water fowl although having it in a desert is somewhat unique. The Mallard pictured below watched us as we watched him strike up a nice profile. 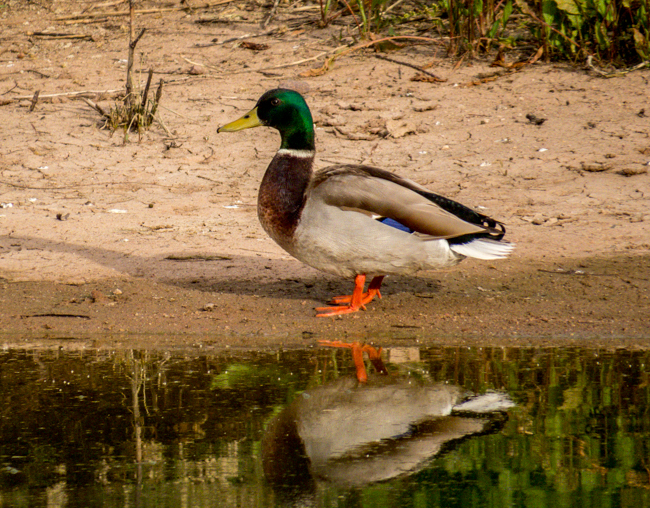 We also came across what appears to me (and I’m no expert) a Snowy Egret. He was looking intently in the water for some victuals. 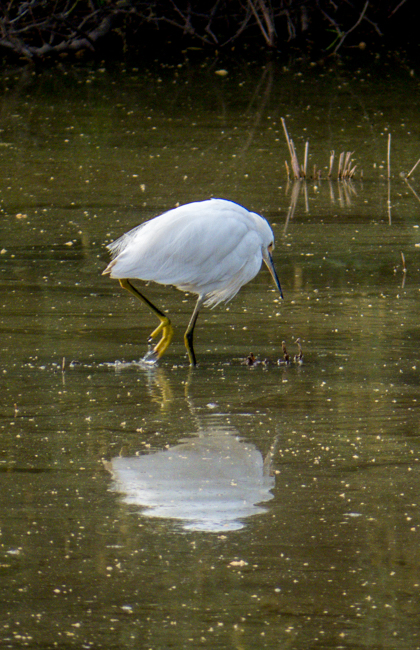 Every once in a while he looked up to allow me to snap this shot of him. 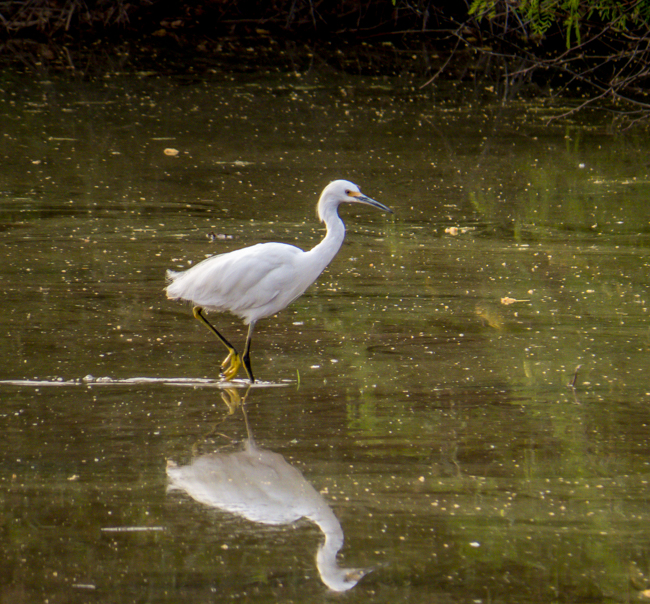 The group spotted a nest in this tree and there was a fair amount of activity around it. We saw a Verdin poised next to it. There was another nest nearby and we were wondering whether one was a fledgling nest while the other was home for adults. 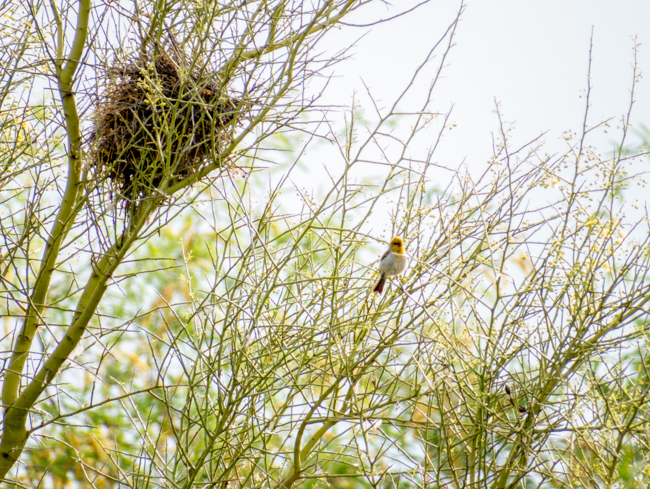 Although I had seen American Coots on a number of occasions, this is my best picture so far of the bird with its white beak. I also like the color of the eye against the dark feathers; nice! While this bird looks somewhat like a duck, it has a classification of its own. 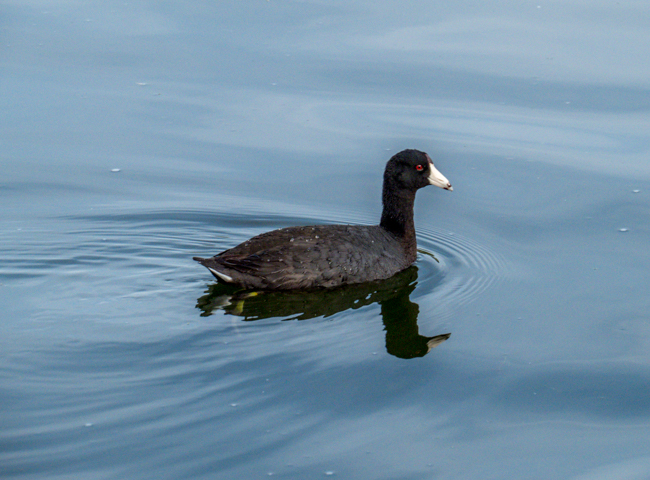 This fellow looked to me like a Great Egret. 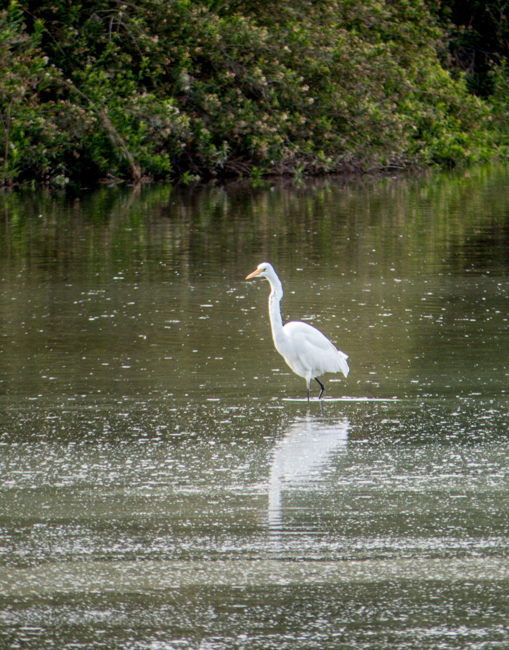 One of the last birds we saw this day, which was a surprise sighting since we were sitting around having snacks and reviewing which birds we had identified, was a Cassin’s Kingbird. He just appeared high in the tree and stayed for a while so we could marvel at his beautiful coloration. 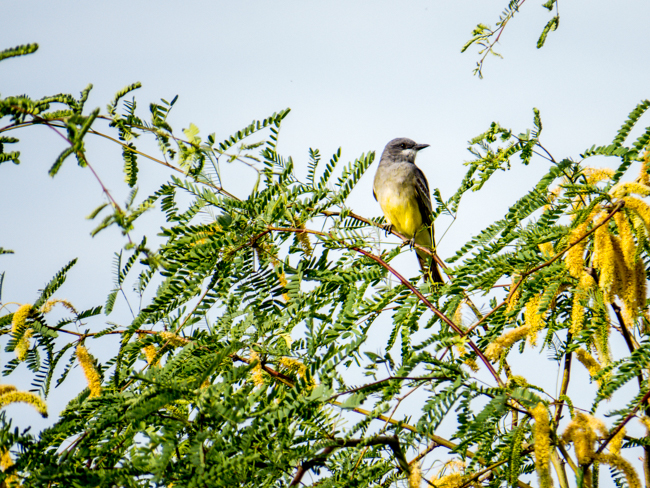 I will finish the bird walk next week with some more notes and photographs. Which bird photo did you find most interesting?