“The soldier is the Army. No army is better than its soldiers. The Soldier is also a citizen. In fact, the highest obligation and privilege of citizenship is that of bearing arms for one’s country.” — George S. Patton

NOTE: You can read the introduction to this series HERE:

Many of the photographs in today’s selection were taken in China circa 1944. By that time the war may have taken a turn in favor of the allies and perhaps there was great optimism that they would prevail, but I am not sure.

This series of photographs demonstrates how, even during wartime, there is a desire to achieve some sense of normalcy and for many they forge ahead with day-to-day life. 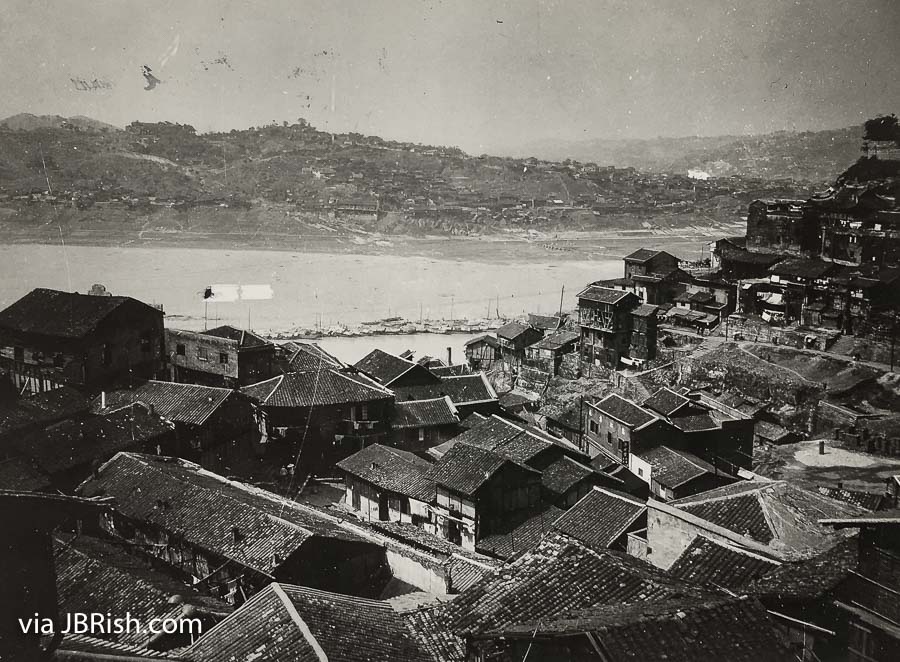 It is obvious from some of the markings that this picture (above) is well traveled as indeed it is 75 years old. At first I thought the two whitish rectangular objects (left) were defects in the photograph, but upon closer inspection, they appear to be attached to poles which are part of the structure. There is a dark blemish on the left-hand white rectangle 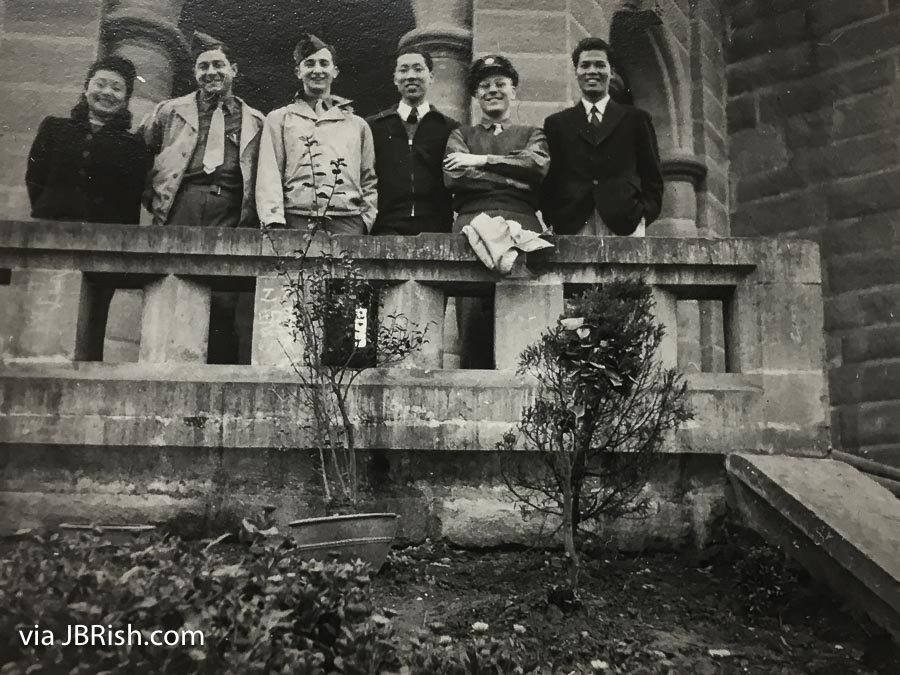 “A photograph of US Soldiers with Chinese friends at the University in Chungking, China
size – 2.125 x 1.60 including white space

These students at the University of China developed a friendship with the American soldiers. Martin Ross is second from the left. 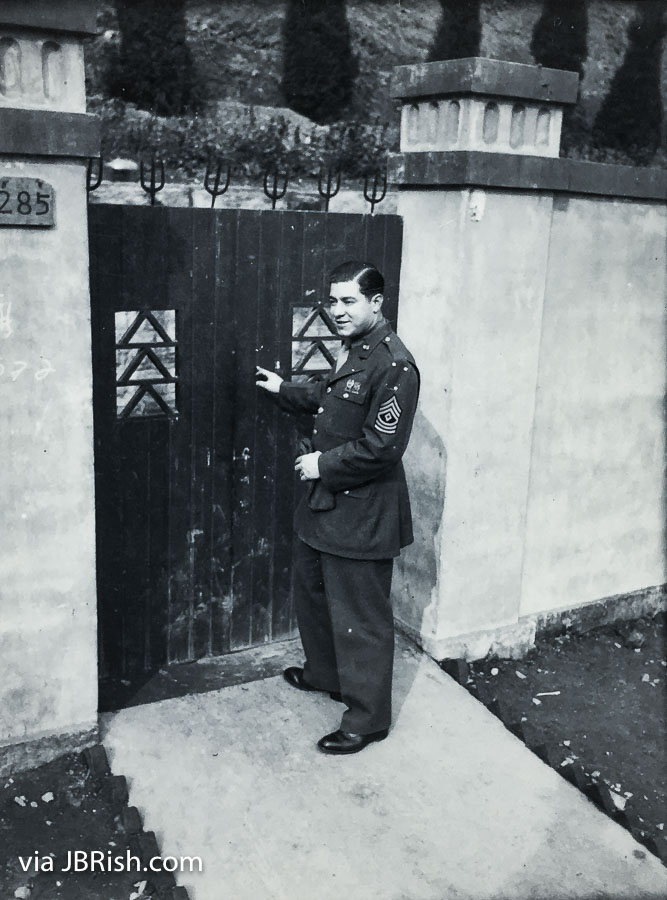 I cannot be too sure where this picture was taken, but it was grouped with others taken at the University of Chungking in China and thus I assume that is the location of this picture.
size – 1.75 x 2.375 including white space 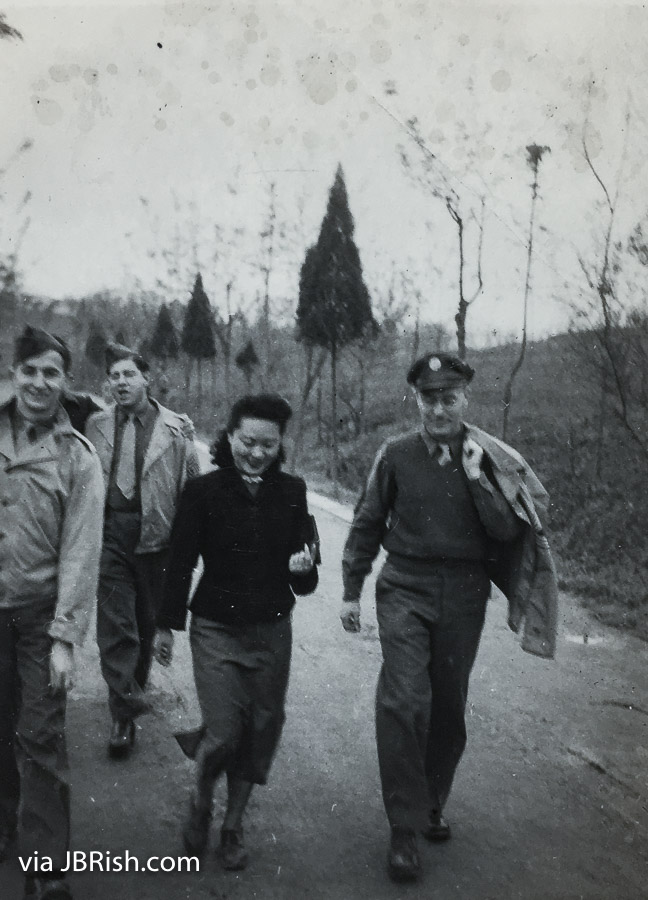 This group of soldiers is walking with a young woman associated with the University of Chungking.
size – 1.75 x 2.375 including white space

In this picture, the soldier on the right appears to be an officer. There is a notation on the back of the photograph “Chungking Univ. Feb, 1944 – Shoppin Pak” whether that is a name or not, I have no idea 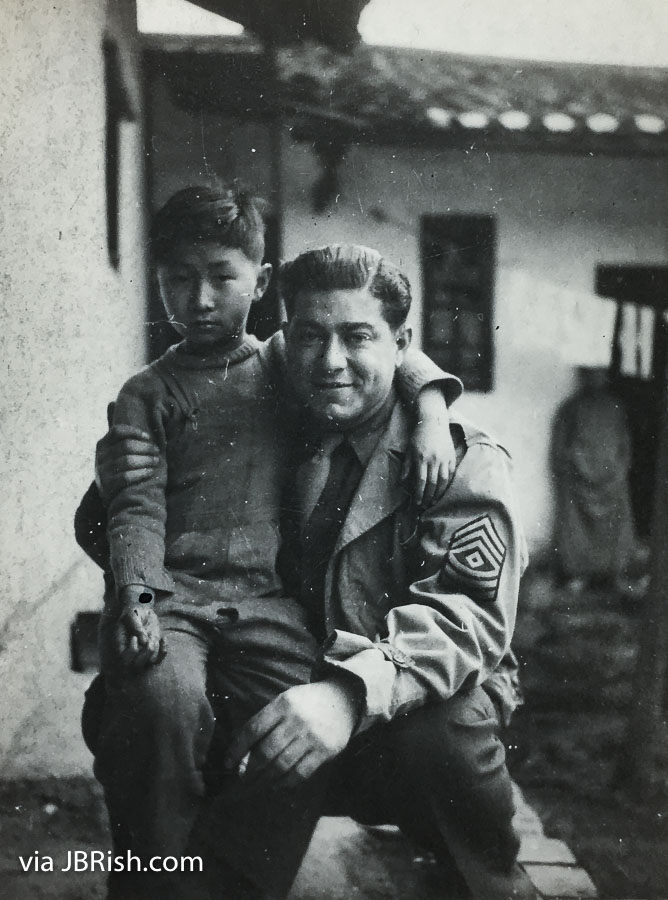 My father always had a fondness for children. He enjoyed doing magic tricks and playing ball with them. It is curious to me that this Chinese boy was named Bernard on the back of the photograph. Whether that is an Americanization or not we will never know.

I wonder, if by any chance, this person named Bernard is still alive and if he would remember my father.

My father was not a cigarette smoker as far as I was aware so it is surprising to me that he has one in this photograph. He did enjoy cigars which were usually El Producto Coronas.

DISCLAIMER — Many of the photographs I will be presenting as part of this series are very small and/or very old. In order to enable proper viewing, I scan the images and enhance them to the extent possible using Adobe Lightroom or Photoshop software. These images are not manipulated to remove or modify the content. The enhancements are strictly to provide contrast, bring out details and to render black and white areas in more natural tones. Nothing has been removed or added. I will provide measurements of the actual photographs as they may seem larger than actual size because of the digital presentation.