I just came back into the house from taking the picture below of our Queen’s Wreath. This is a very easy vine to grow in the desert as long as the appropriate exposure, water and support are offered. Throw in a bit of fertilizer and this plant does not ask for much else. As a matter of fact, the main challenge is to keep it in bounds as it is a vigorous grower and wants to do more than its fair share! 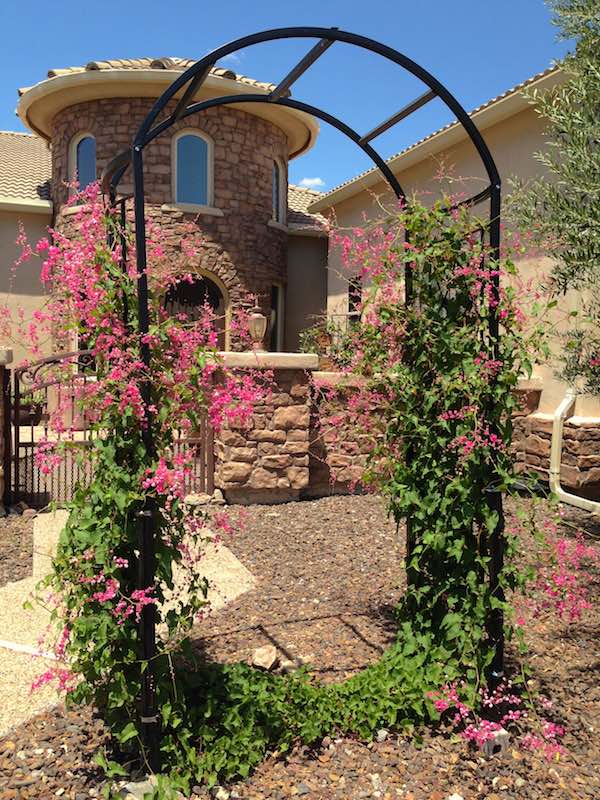 This (above) is still relatively early in the season. Below is a picture of what the plant looked like in a more mature stage. 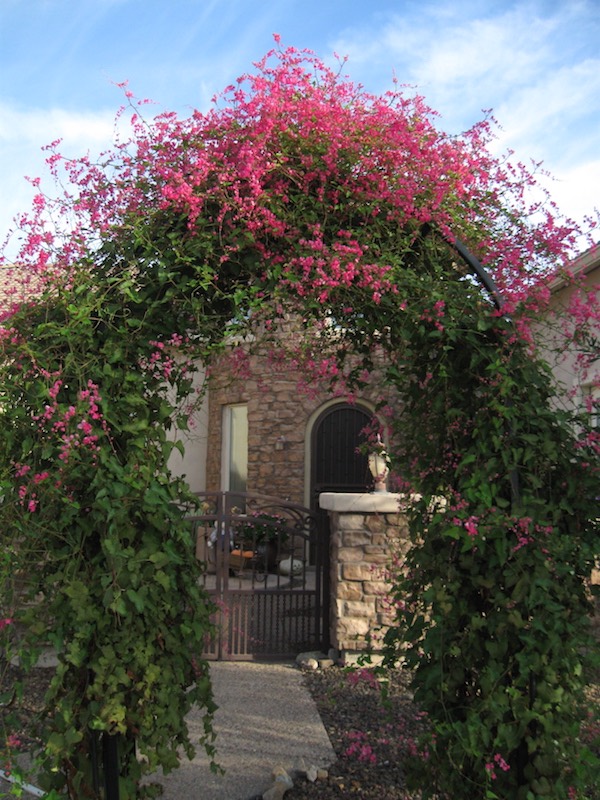 As you can see, the plant is quite robust and that is usually a good thing; more plant, more flowers!

That would be true except for the Monsoon Season winds. With all that foliage, this vine on the trellis becomes a sail and catches the wind. This is a big box store trellis and we had to do quite a bit of modifications to make it work for us. The one weak point, which we realized right away, were the welded joints at the base of the trellis which hold the tab for what are now screws. Originally the trellis was packaged with eight inch “J-shaped” spikes that didn’t even have ridges. That wouldn’t support the trellis with the plant on the calmest of days.

We eventually buried concrete blocks in the ground and screwed the trellis to the blocks to offer a more sturdy support. There were other modifications as well, but that is for another post. (See the picture below with arrows indicating potential weak points where metal fatigue might occur.) 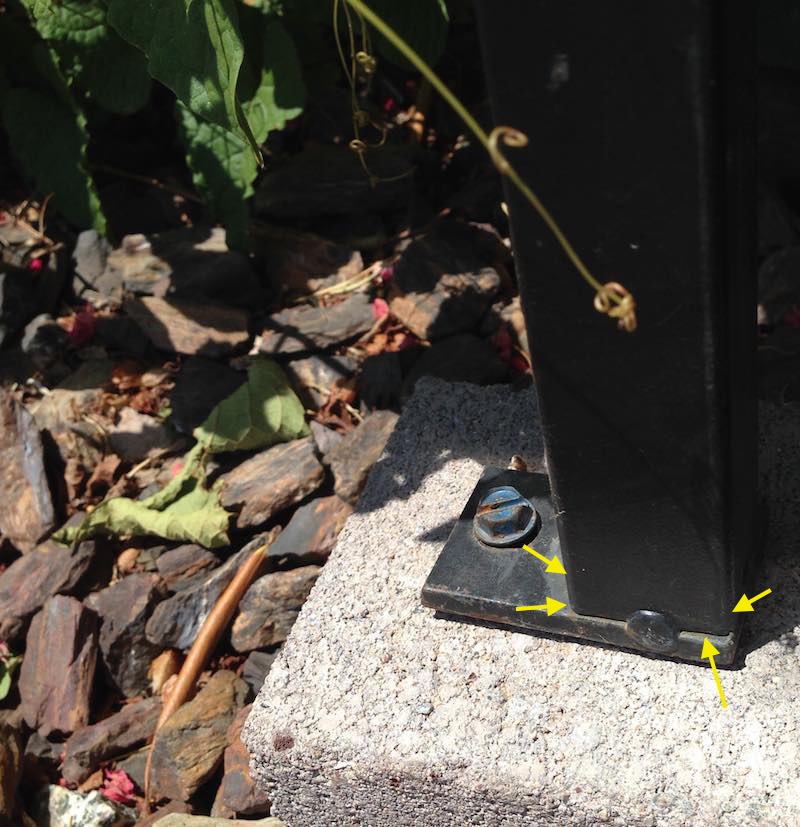 Even with the feet of the trellis well-anchored by the cement blocks and the screws, we noticed during last year’s winds that the trellis swayed back and forth quite a bit and we feared eventual metal fatigue on the tabs holding the screws and that they would break off.

We had tried to support the vertical posts of the trellis with rebar and then using old nylon stockings to tie the rebar to the supports and we even twisted wire covered with plastic tubing around the rebar and trellis to hold it together, but that did not hold tight enough for real support. 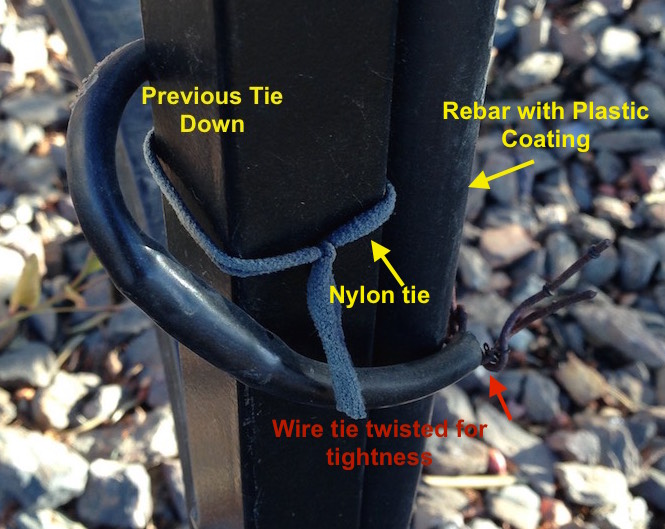 This year we decided to use hose clamps which, in theory, would hold the rebar more tightly to the trellis and hopefully keep movement to a minimum. You probably know them as the clamps used in cars to keep the radiator hoses attached to the metal valves of the radiator.

Here is a picture of the tools needed for the project: 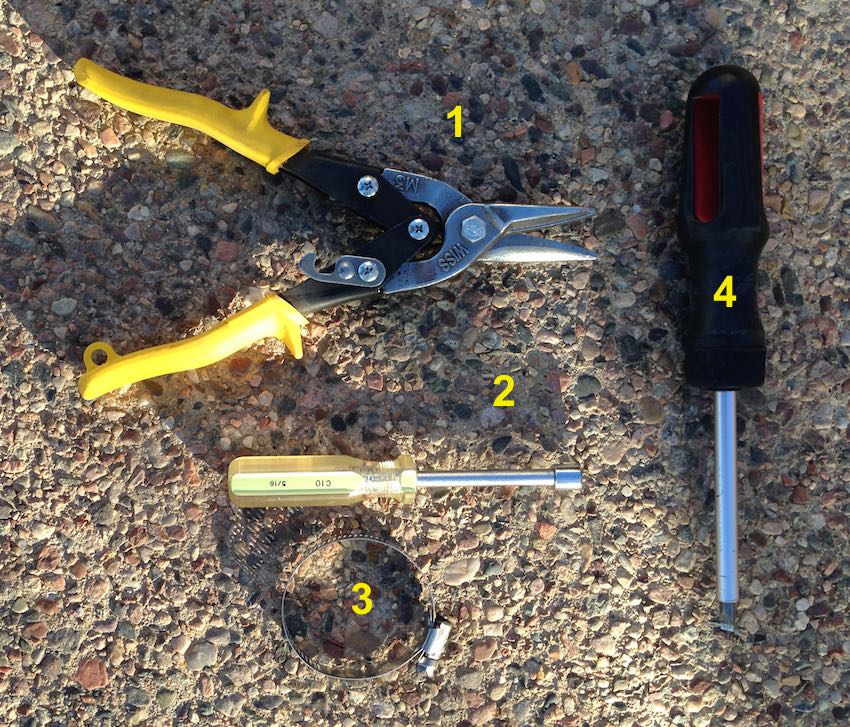 1 – Wire snips to cut any excess length of the clamp

Here’s a better look at the nut driver and the hose clamp. 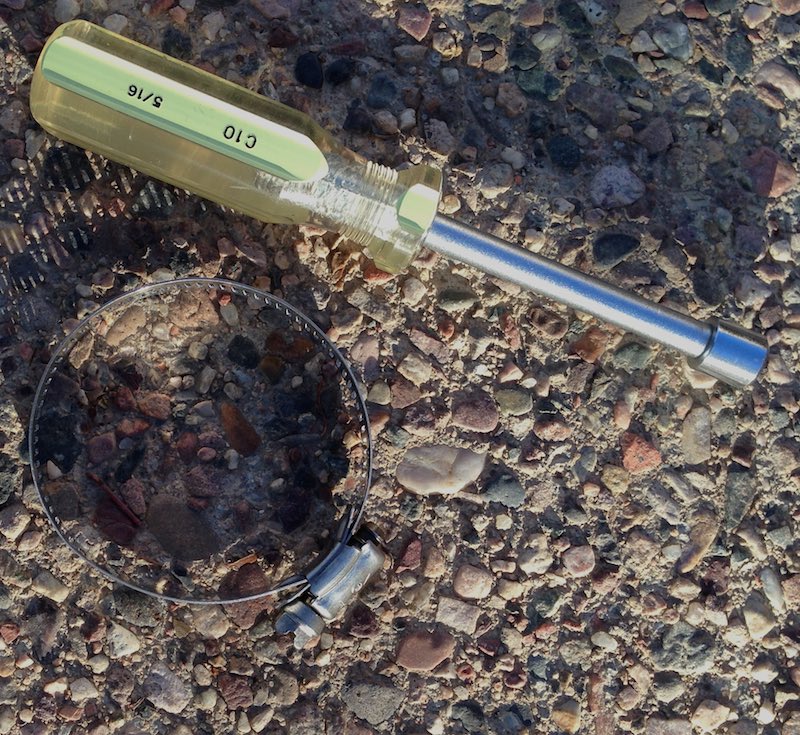 We secured the clamp around the rebar that was in place. Notice how tight the clamp is. The plastic around the rebar is really compressed. Also notice that a thin piece of plastic was used between the inside part of the hose clamp and the trellis to keep the paint from being scratched. 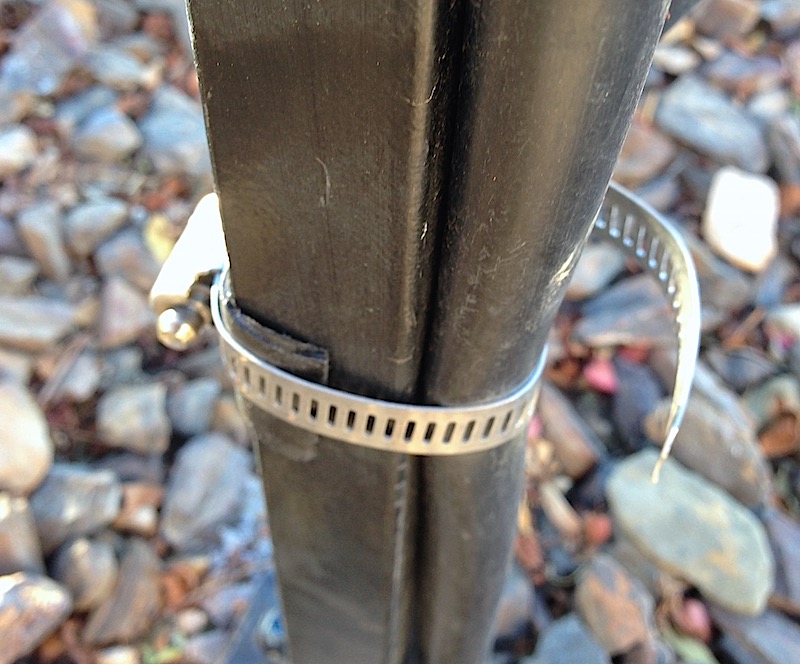 We later decided to insert an old piece of 3/4″ irrigation hose around the clamp to protect the metal instead of the thin piece of plastic. In the picture below you can see it on the right with the clamp coming out of it. Notice the long tail of the leftover/unused portion of the ratchet band from the hose clamp. That is where we use the wire snips to cut it off. 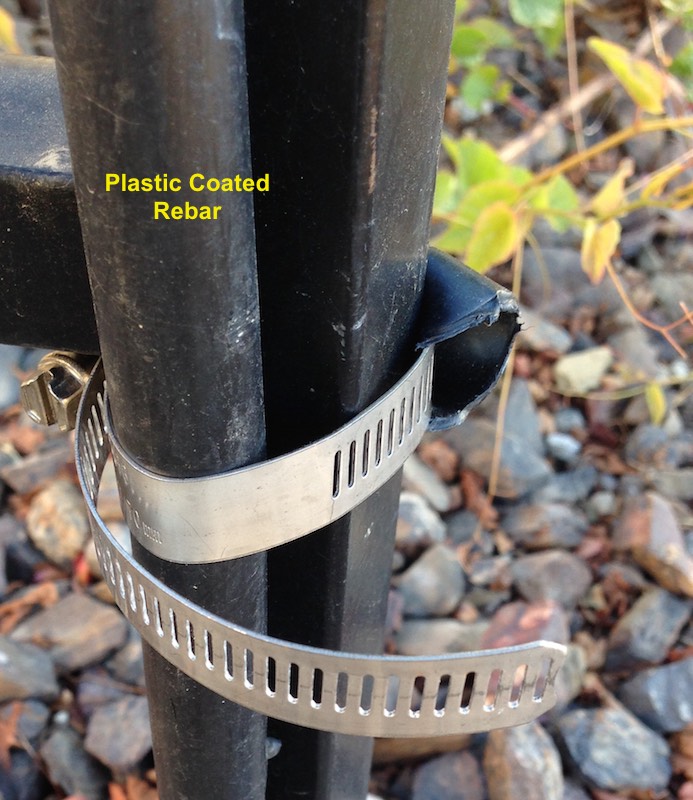 This is the final result. We did this in two places on all four verticals of the trellis and hopefully the rebar, being held tightly along the trellis, will keep it from swaying as much and reduce the metal fatigue on the supporting screw tabs (yellow arrow). 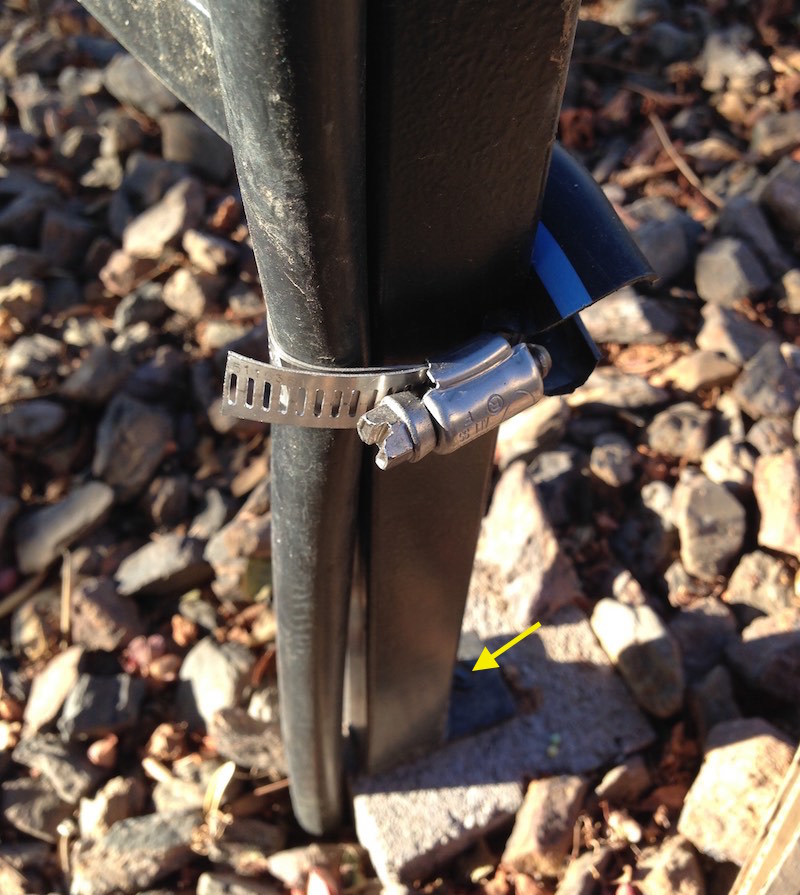 Only time will tell and so will I via a new post if things don’t work out!